Share All sharing options for: Cut the Rope 2 coming to iOS devices Dec. 19

The sequel to ZeptoLab's highly successful physics-based puzzle game Cut the Rope will launch exclusively on iOS devices on Dec. 19.

Speaking to Polygon, ZeptoLab's CEO Misha Lyalin said the studio wanted to make Cut the Rope 2 because it wanted to offer a new experience with new game mechanics, while still building on the foundation of the original game.

"We've released many, many updates for the original Cut the Rope, and our numbers in terms of downloads and daily active users continue to climb, but we wanted to tell a different story," Lyalin said. "We wanted to have very new game mechanics, and we felt that this is a very different game, so it deserves a number 2."

"We design by giving freedom to the developers. We don't do top-down planning."

The original Cut the Rope launched in late 2010. Players were tasked with helping a little creature named Om Nom obtain a candy that was often hanging from multiple ropes. Using a swiping motion on a touch screen (or a swiping mouse motion in the browser-based version of the game), players would cut through the rope, releasing the candy, which would then fall into Om Nom's mouth. The puzzles would get increasingly complicated as the levels progressed, and players would have to take advantage of the game's physics in order to maneuver the candy.

Cut the Rope 2 has the same concept as the original game, and players still have to cut ropes and play with physics to help On Nom. But it is a significantly more dynamic game than the original, offering interactive environments, helper characters and a greater focus on story.

In Cut the Rope 2, Om Nom has gotten lost and must find his way back home. His journey involves traversing different environments, each with different mechanics for players to engage with. In a forest level that Polygon played, the candy sat at the top of a platform that was attached to ropes. Beneath it were more platforms attached to more ropes. We had to strategically cut the ropes so that the candy would roll down the screen from platform to platform before reaching Om Nom's mouth.

These forest levels also included elements like balloons (which make platforms float in the air), whoopee cushions and a flying character named Roto, who uses flight to help Om Nom. 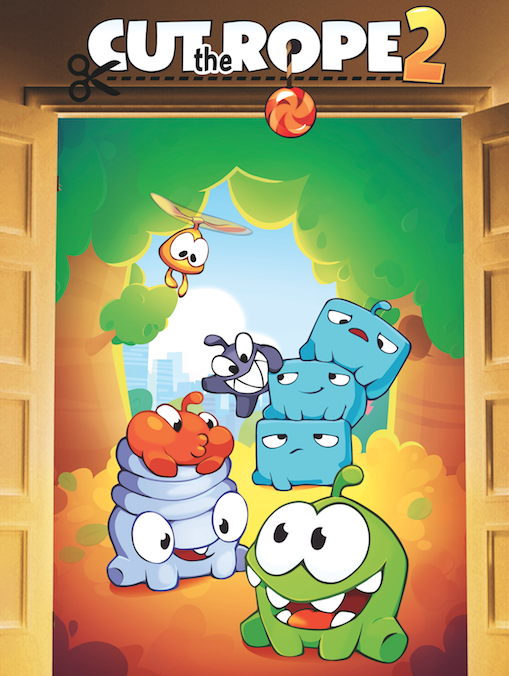 In the city park environment, players will encounter Toss, a character with springing abilities that will let Om Nom bounce into the air. The junkyard environment has a block-like character named Blue, whose special ability is to multiply himself to change the way the levels look and play. In the underground levels players will meet Boo, a prankster who tries to frighten Om Nom, and in the Sandy Dams players will meet Lick, a character who uses its tongue to affect how players navigate the levels.

Lyalin told Polygon that while the studio no longer considers itself indie because it has grown significantly from its original two-person team, it still aims to hold onto the best part of being indie, such as building games from the bottom-up.

"Our founders who originally made Cut the Rope are still very involved," Lyalin said. "We design by giving freedom to the developers. We don't do top-down planning. Top-down planning means you look at the numbers and says that a lot of people are playing a certain kind of game, so you tell your team to go make that game. It doesn't work like that. We let people come up with different concepts, and then we make them or cut them or change them.

"The company was an indie company three years ago. It was just two brothers making a game. We're not an indie company anymore. We've obviously grown a lot. But we want to preserve what was best about being indie, which is our ability to come up with new stuff."