Share All sharing options for: Midnight Star's grand plan to bring an epic shooter to touchscreens might just work

Can the first-person shooter be reinvented — and truly work — on a mobile touchscreen? That's what the creators of Midnight Star, a frantic, skill-focused shooter for tablets and smartphones, are hoping to answer.

That's not to say that first-person shooters on touchscreen devices aren't readily available (and already successful). Seminal shooter experiences like Doom and Marathon have been ported to iPhone and iPad, and versions of more current shooters, like id Sofware's Rage and Activision's Call of Duty: Zombies, have made the transition to tablets and phones.

Pasadena-based developer Industrial Toys is taking a somewhat different approach, aiming not to adapt existing experiences, but to build something from the ground up.

That meant not trying to shoehorn a pair of virtual analog joysticks onto the touchscreen of an iPad. Midnight Star is meant to be played with one hand, two fingers. You touch to shoot; double touch to take cover behind an energy shield. You pinch to zoom in to get a closer look at your enemies, the better to headshot them from.

The movement in Midnight Star is on-rails, typically a design compromise that denotes a simple, laid back experience. But seeing the game's creators play Midnight Star, their fingers dancing across an iPad screen at dizzying speeds — shooting, defending, looking left and right, weapon-switching, zooming in, sniping, zooming out, reloading and a dozen other actions performed in seconds — you quickly realize this is a game of skill and high scores. It's first-person shooting boiled down to the tastiest morsels.

"We know what's fun about playing a shooter," said Alex Seropian, Industrial Toys CEO. "It's lots of cool experiences that give you that endorphin rush: precision aiming, getting a headshot, going in and out of cover, emergent behavior, all that kind of stuff. How do you get those kinds of experiences with a device like this?" 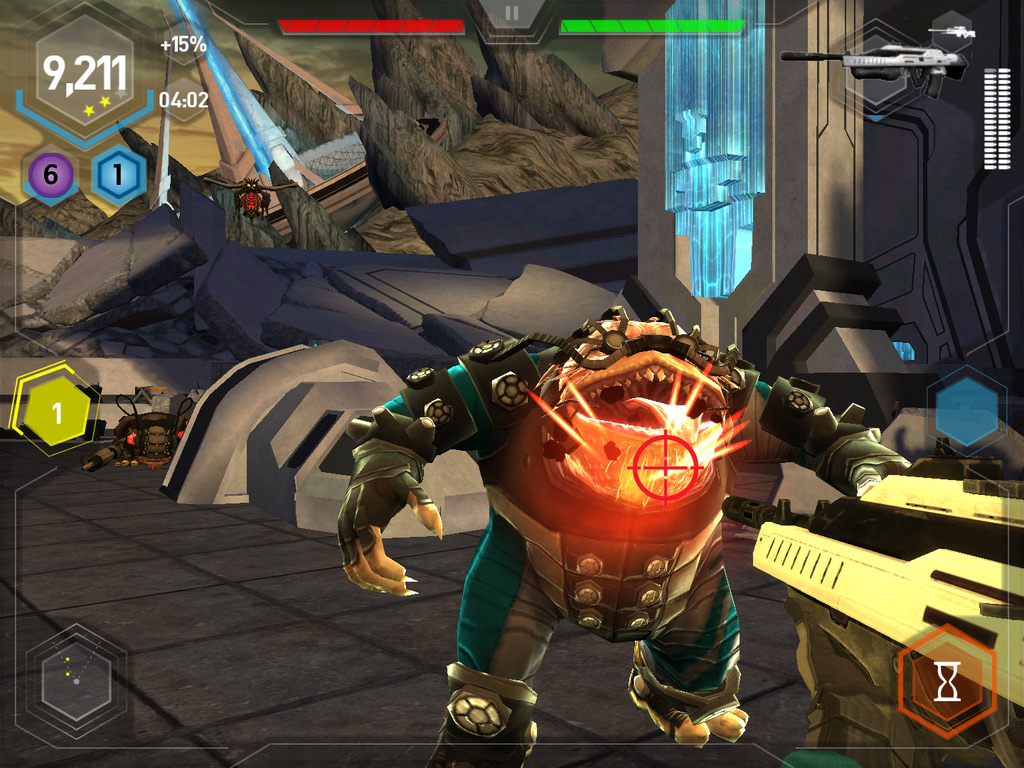 Midnight Star delivers levels that consist of short, digestible bursts. Harris says each level, which are broken up into checkpoints, aims to deliver "a satisfying 90-second experience, that strings together to create hours and hours" of memorable gameplay.

The result is something that looks a lot like a console shooter — one of the early Halo games, perhaps — injected with high score-focused, arcade shooter sensibilities.

As I watched Seropian play his team's game, linking together head shots and kill streaks, always prescient of the next imminent threat, I was reminded of games like Namco's Time Crisis and Sega's The House of the Dead. Those are the types of games that anyone with a couple quarters and the ability to aim a big plastic gun at something can have fun with — the same games that master players can best on a single credit. Midnight Star seems to follow a similar blueprint, offering a game that simple to learn for the masses, but deep enough to attract serious, skilled players.

Much of Midnight Star's depth comes from its scoring system. Players can string together multi-kills if they keep a chain of kills going and they'll be rewarded for killing sprees in which they don't take any damage. They'll get extra points for head shots, destroying an enemy's armor, in-air kills and more.

"When you first start, all you know is tap this dude and shoot him," Seropian said. "But as you play and expose these things, there's a ton of shit to find."

Players will have an impressive array of killing tools to draw upon. In addition to various pistols, assault rifles, rocket launchers, sniper rifles and other FPS mainstays, players have access to shields and superhuman powers. Some shields will simply stop incoming enemy fire, others will reflect that fire back or transform bullets into healing energy.

The game's special powers, dubbed "hypers," can be used to float enemies into the air, rendering them momentarily helpless, or used to slow time, making those killing sprees and head shots easier to pull off.

Everything in the game, your guns, shields and other gear can be upgraded and leveled up. You'll spend an in-game currency to do so — Midnight Star is free-to-play, after all, though Industrial Toys stresses everything can be acquired with playtime and patience. 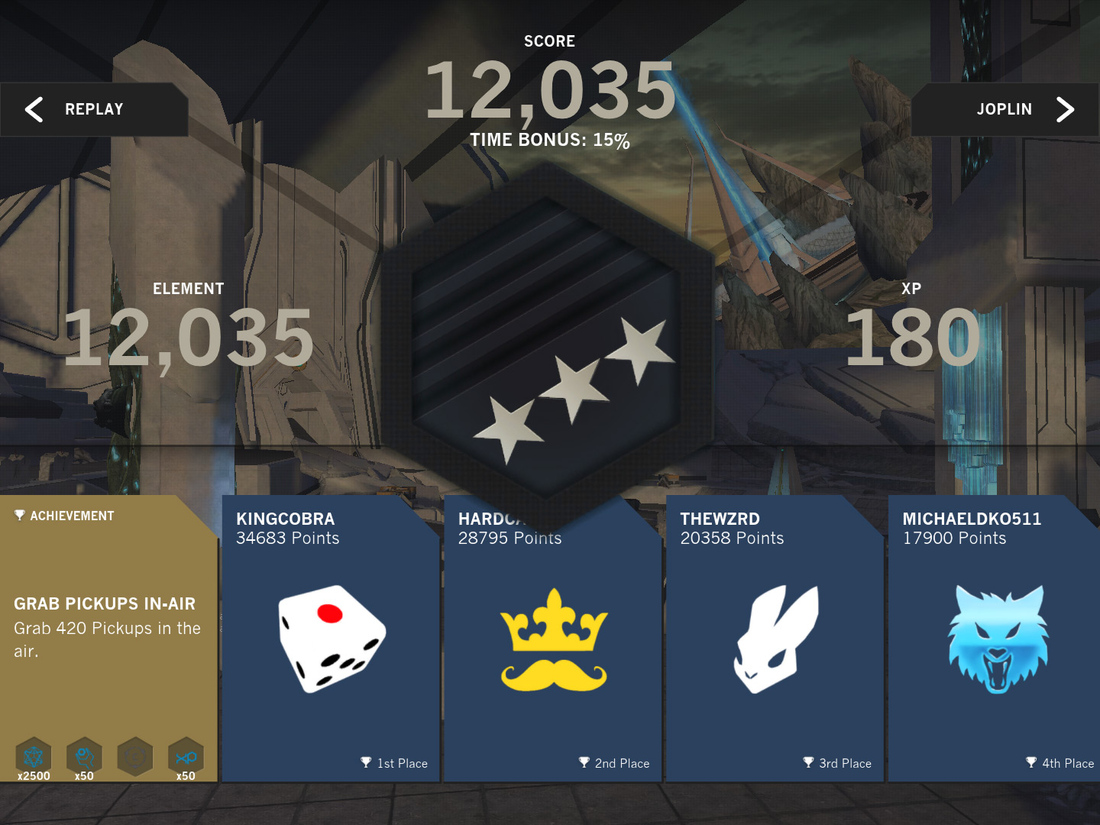 Growing better at Midnight Star and challenging your best scores and fastest times will likely be a compelling personal challenge. Achievements, which themselves level up as you complete them, are a major part of Midnight Star's gameplay loop.

But multiplayer challenges against friends and strangers appears to be where the biggest thrills will come from. Players will be able to design and issue high scoring challenges, then open those challenges up to the Midnight Star community at large or just to a few friends. Dozens of parameters, from maps to game rules to how much health you'll have in a particular challenge, can be decided by the player. They can even require an ante, demanding that players wager their in-game credits in order to make things a little more interesting.

The developer will also be handing out trophies to exceptional players on a daily, weekly and monthly basis, virtually rewarding them for playing the game often and skillfully.

Industrial Toys is making the competitive nature of Midnight Star a major focus. Everything you do in the game, Harris says, you see in the context of your friends. When they get achievements or issue you a challenge or best your high score, you'll know about it through alerts displayed in the game's main menu — which also doubles as the bridge of the spaceship you're traveling on, the USSF Joplin.

The Joplin serves as something of a hub for players, where they can navigate their way into missions and challenges. It's also the ship where you'll encounter various characters who tell the story of Midnight Star. As Charlie Campbell, the hero of Midnight Star's campaign, you'll interact with other members of the Joplin crew, seeking their help in upgrading your weapons, having them build you new gear and cluing you into the game's story.

The foundation for Midnight Star's narrative will be laid out by a completely separate app, a free, interactive graphic novel called Midnight Rises. Part dynamic comic book, part point-and-click adventure, Midnight Rises sets up the story while also giving players an opportunity to alter how things play out in the video game companion app. 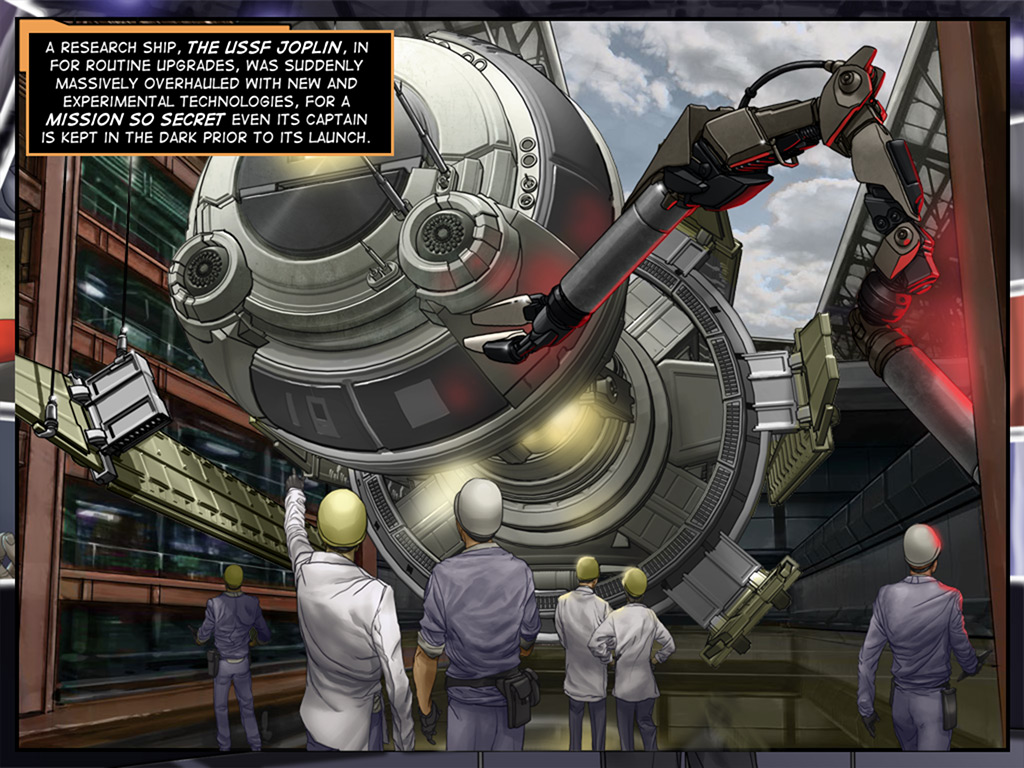 In Midnight Rises, players will be able to unlock items in Midnight Star and vice versa. Eagle-eyed readers of Rises might spot some gifts hidden in the background of panels, which translate into Midnight Star rewards. Likewise, as players work their way through the game's story, they'll unlock new chapters in the digital comic.

Written by Hugo Award-winning author John Scalzi (Old Man's War, Redshirts) and illustrated by lead concept artist and Marvel Comics vet Mike Choi, Midnight Rises does more than just tell a prologue — which, by the way, is not required to enjoy the video game, its creators say. As players meet characters while reading Rises, they'll unlock full dossiers for the game's cast of characters, as well as historical details. Everything that's happened technologically and geopolitically in the 120 years that separate today and the future world of Midnight Star, the game's creators say, is stuffed into Midnight Rises.

Midnight Rises, which is scheduled to hit the iTunes App Store a couple weeks before the launches, is a fully-fleshed out, but optional experience, its creators say. Players of Midnight Star will have plenty of fiction to work with in the game itself, which is partly set up during a two-minute cut scene and in-game storytelling. From there, players will piece together a grand sci-fi tale that involves time travel, an alien transmission from within our solar system and a mysterious, massive space artifact.

Midnight Star itself appears massive and mysterious. It's an attempt to tell an epic story and craft a compelling multiplayer experience, while also remaining a free-to-play game. Based on what we've seen of the iOS game, the team at Industrial Toys is well positioned to deliver a console-quality game with real longevity on mobile platforms.

Currently, Midnight Star is being played in a closed beta. Industrial Toys hopes to transition that to an open beta and ultimately a full release on iPad and iPhone sometime next year.