Numerous distinct and disparate styles of driving an automobile at speed exist under the sweeping umbrella of "racing." Fast and the Furious-style street racing differs greatly from organized circuit racing on a motorsport track, and it's tough to make comparisons between drivers in those different disciplines.

The co-star of Codemasters' Grid 2 has a grand idea to make it possible.

Patrick Callahan is a man with a self-made fortune and a unique dream. He envisions a global competition pitting drivers from all walks of racing life against each other, a motorsport spectacle that will be given prime-time placement on ESPN alongside other major sporting events.

Callahan calls it the World Series of Racing. But in order to put it together, he needs a talented driver to round up the world's best racers. That's where you come in.

The World Series of Racing is a "dream, make-believe scenario" that "drove, really, the concept of Grid 2," according to Ross Gowing, senior game designer on Grid 2 at Codemasters. The studio hopes that the story will pull you through the single-player campaign, in which Callahan chooses you to anchor the World Series of Racing. He tasks you with recruiting racers from around the world. That's accomplished by traveling to organizations in the U.S., Europe and Asia called race clubs, and defeating their top drivers in races of their choosing.

"It's really tracking your rise to become the ultimate racing superstar," said producer Iain Smith. "But in parallel to that is the rise and creation of a World Series of Racing."

Grid 2's campaign is Codemasters' twist on the this-race-then-that-race progression that's typical in single-player modes of racing games. During an hourlong presentation last month, three Codemasters representatives repeatedly characterized the story as a "wrapper" — it's more an excuse for you to partake in high-speed hijinks than a riveting, heart-wrenching experience.

"We're not telling an ornate story with a twist, or some sort of crazy 'your brother kills you at the end of the game' [tale] or something like that," said Smith.

Instead, the story is meant to set the races in a plausible real-life framework, with lifelike elements that Grid 2's developers hope will keep you engaged and engrossed.

"We felt that if we were going to create a fictional league," said Gowing, "we needed to still ground it in reality and make it feel believable."

ESPN SportsCenter anchors and analysts discuss the World Series of Racing like it's a real event, and an in-game computer — complete with emails, forums and social media feeds — offers interactions with fans, other drivers and your racing team. After you complete every World Series of Racing "season," you'll be rewarded with an FMV that highlights your exploits and the growth of the event. You don't have an on-screen avatar, but Grid 2 actually puts your name right into the videos.

The aforementioned in-game computer sits in your home base, which is where you interact with the game world when you're not racing and where you keep your vehicles. Your base begins in the dingy garage of your own modest home, but gradually gets upgraded to larger and more technologically advanced spaces like a warehouse that can hold your burgeoning car collection. The campaign isn't strictly linear on a race-to-race basis; at any given point, you'll have multiple events to choose from.

the story is an excuse to partake in high-speed hijinks

The other realistic element is that you'll be driving actual cars throughout Grid 2. According to Smith, Codemasters has traditionally received car data from auto manufacturers, but the Grid franchise isn't a simulation series in the vein of Gran Turismo or Forza Motorsport. The studio's handling system, which it calls TrueFeel, is designed to toe the line between delivering a sense of realism and delivering an arcadey feeling of fun.

Each car "feels like that car should feel," according to Smith. But he also pointed out that Codemasters is going to great lengths to tune Grid 2's difficulty curve. Unlike a simulation racing game, Grid 2's challenge doesn't come from turning a bunch of assists on or off. Instead, the difficulty in the campaign gradually ramps up: The courses, AI drivers and available cars all get tougher to wrangle as you go.

You'll face sixty different CPU drivers over the course of the story mode, each with their own personality. As your team's engineer calls them out on the track, you'll begin to take note of their unique driving styles and tendencies, and perhaps form rivalries with them.

Although the campaign has you revisit locations, the specific courses will differ every time. A contest might run under cover of darkness instead of during the day, or take place along a new route altogether. Certain races offer a feature Codemasters calls LiveRoutes, a system in which Grid 2 dynamically alters the upcoming part of the course to keep drivers on their toes. The game actually streams in an entirely different section of the track, changing the turns up ahead as well as accompanying elements like crowds, signage, barriers and the road surface. 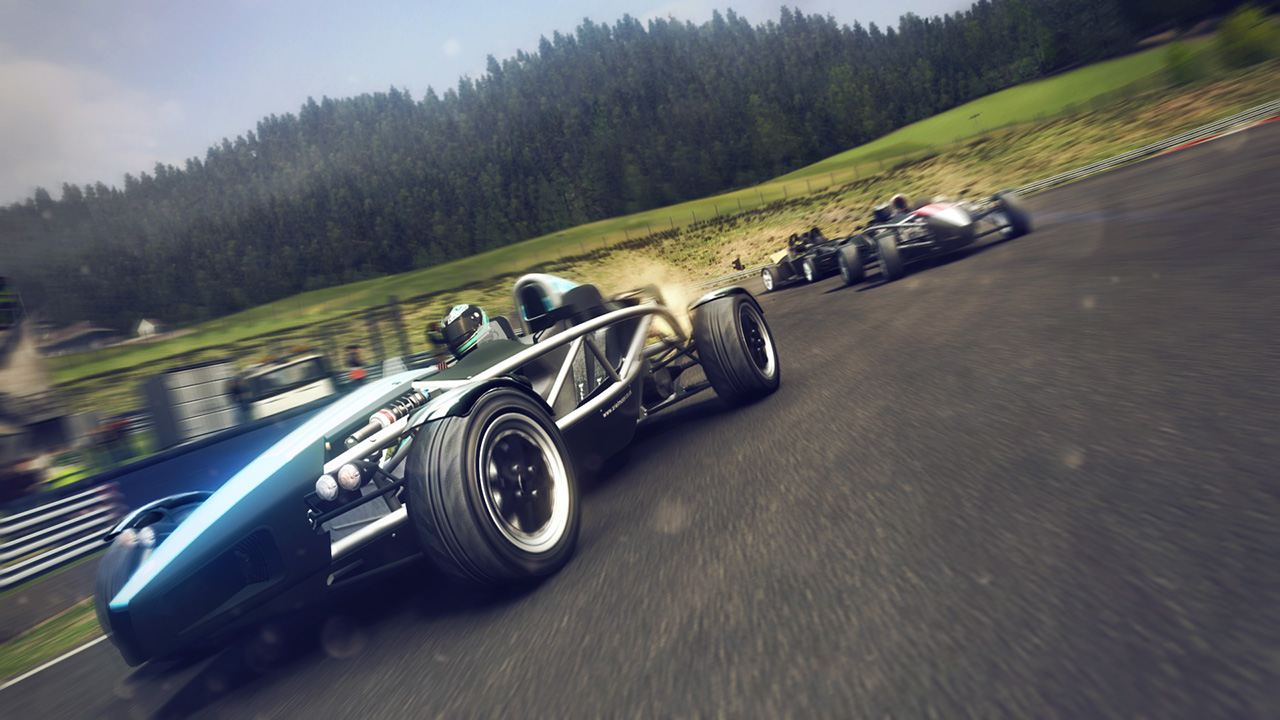 During the demo, we were able to go hands-on with three very different events in Grid 2's campaign: a nighttime street race in Barcelona, a circuit race at the Red Bull Ring in Austria and a checkpoint race in Chicago.

The Barcelona race takes place early in the second season of the World Series of Racing — you spend the first season stateside, then cross the pond — and the developers pointed out that the crowds and billboards lining the track were relatively sparse; after all, it's still early days for the World Series. This was an Eliminator event, in which the trailing car is eliminated every 30 seconds, and we were unable to stay alive for very long after misjudging a corner and spinning out.

Next, we tried a standard circuit race at the Red Bull Ring in Austria. Our open-wheel car and its racing tires had a much tighter grip on the road, and we managed to complete the race. According to Smith, this event occurs near the end of season 2, with a "legitimate motorsport feel" conveyed by the full grandstands along the track and the presence of major sponsors.

For our final race, we returned to a season 1 location, the streets of Chicago. "This is now the [World Series of Racing] in its full glory," said Smith, highlighting the streets filled with fans and the fireworks and flashbulbs going off as the race began. At this point, it's a truly global event, too — you've returned with drivers from Europe and Asia to join the American contingent in a checkpoint race. We couldn't keep up with the checkpoints, but we noticed how differently the event's American muscle cars handled as compared to the previous vehicles we tested.

As much as Codemasters may be attempting to shake up the standard racing campaign with a narrative wrapper, the studio wants to assure Grid fans that Grid 2 retains the series' focus on the driving experience above all else. In the end, said Smith, the World Series of Racing is about "being fast, being first and being famous."

Grid 2 launches May 28 in North America and May 31 worldwide on Windows PC, Xbox 360 and PlayStation 3. Check out the newest trailer below.