Waylon Flinn designed Crunch Magic as a way for gamers to find new titles by doing what they love — gaming.

Along with programming partner Michael Wilkes, Flinn created a statistical processing program that sorts Steam user preferences and tosses out recommendations. It's in the same vein as musical website Pandora, which draws from user favorites to recommend new tracks and artists.

Crunch Magic is a short game that plays on your emotional connections. Once you've logged on to Steam through the site, the program pulls information on your most recent and frequently played games. After you've built up a few hearts by answering questions, you'll spend them trying to save your favorite games from being tossed into a fire. The catch is that you can only save so many. If you deplete your available hearts, the game is over, and you're left with nothing. 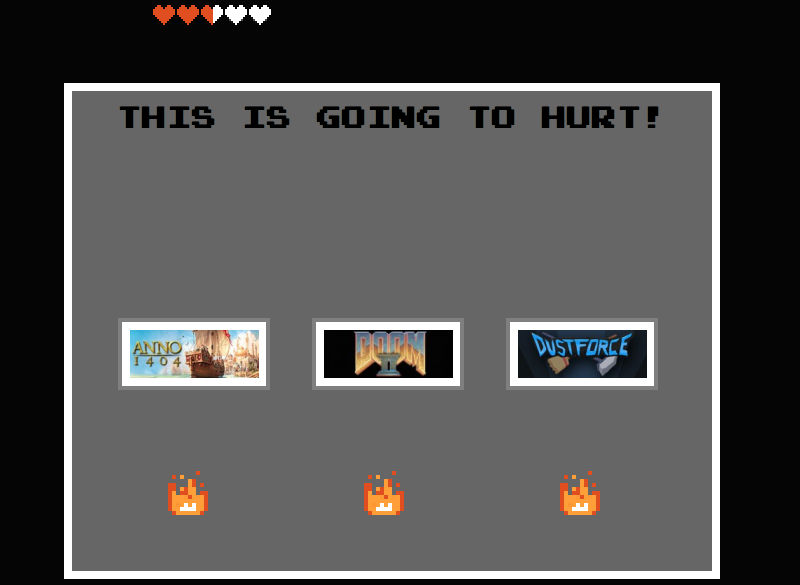 It's a system that Flinn calls "endearing" in its simplicity. His motives for creating a game, rather than a service that recommends titles straightaway, are twofold.

"It was really born from my frustration from places like Amazon that try to give you recommendations and it's really frickin' boring," Flinn said. "You scroll through this huge list of stuff and you give it stars, and it's just horribly boring. It's just work."

Flinn's frustration was matched by his love for Valkyria Chronicles, which Flinn details in his blog.

"The best games are not a commodity," Flinn wrote. "They are not one size fits all. A person's interaction with a game is a personal thing. They love it because there is something deep inside them, something they might not have even known about before they played it, that is drawn in and given sustenance.

"[Crunch Magic] is just designed for something a little more magical. It's designed to help you find games that aren't just good but that feel like they were created just for you. That's how I feel when I play Valkyria Chronicles. That's how I want everyone to feel every time they pick up a controller."

Waylon Flinn identifies as a programmer, but his background is a diverse one. He graduated college with degrees in physics and mathematics. He's spent more than three years writing psychological testing software, some of which has been used at the International Space Station to test astronaut's cognition capabilities. Flinn's recent venture into the gaming world can be traced back to Game Developers Conference.

"The best games are not a commodity. They are not one size fits all."

In 2012, Flinn attended a talk hosted by Ubisoft creative director Jason VandenBerghe called "The Five Domains of Play." The talk focused on how designers can figure out what games people want to play, but Flinn found himself on the other side of the fence. How do players find the games they want to play?

Despite its use of Steam, Crunch Magic is not affiliated with Valve. Flinn, however, hopes to change that and is currently working hard to open lines of communication.

"I respect them as a company in ways I don't respect a lot of other companies, especially in the video game industry," Flinn said. "I'd honestly like to learn more about how they run their company and maybe get some insights on how we might run this one in the future."

Crunch Magic is still in open beta with more than 7,000 participants. As the threshold continues to grow, more tweaks must be made to keep the algorithms working properly. Flinn plans to keep it in beta until the user base hits its target of 100,000 people or when he finally feels comfortable about "taking the tag off."

"If I look at my list and think, ‘Oh my god, I've gotta buy all these games right now — then we're not in beta anymore," Flinn said.