Share All sharing options for: How the fiction of a sci-fi shooter explores the realities of a real energy crisis

The latest sci-fi first-person shooter from German developer Crytek is an interactive action flick with some compelling subtext about the nature of a global energy crisis.

While the main thrust of Crysis 3 is a climatic wrap-up of the trilogy that started in 2007, the game's sub-plot deals with a shadowy global paramilitary group that uses low-cost energy to enslave the world.

In Crysis 3, players take on the role of a super soldier empowered by alien technology as he fights off both the remnants of an alien invasion and fights to topple the corrupt Cell corporation. But if a player listens closely, they'll also discover details about Cell's rise to power through its use of sustainable energy.

While playing through the first four levels of the game, I couldn't help but notice unexplained references to debt slaves, so I reached out to Crysis 3's lead writer for a bit of explanation.

In the 24 years that passed between the second and third game, the Cell corporation has encased New York City in a mammoth dome, turning the city into a literal urban jungle and giving the company a chance to scavenge for alien "Ceph" technology.

"By finding a way to draw immense power from an alien artifact, Cell sold the world a vision of plentiful, clean energy for all," Crysis 3 lead writer Steven Hall told Polygon. "But the reality was very different."

Because the artifact allowed Cell to generate free energy, they were able to sell it very cheaply. Once they had established a global monopoly on energy, Cell was able to dominate the financial markets and "got busy buying up personal and national debt and every government contract going," Hall said. "By 2047, they run pretty much everything. Governments are in their pockets."

With the world on lock-down, Cell began boosting the costs of their energy. And when a person can't pay they become "debt slaves", forced into what Cell refers to as the Work Away Debt Scheme.

While the details of this aren't fully explored in the overt shooting, stalking and running aspects of the game, Hall says it provides important context to Crysis 3.

"At heart, the whole story is all about power in its many guises &mdash; having it and not having it, what it means, what it costs, uses and abuses," he said. "Cell's use of alien power is the backdrop and the opening scenario."

The most obvious storyline in Crysis 3, though, is protagonist super-solider Prophet and his relationship with the power he obtains through an alien-infused "nanosuit." 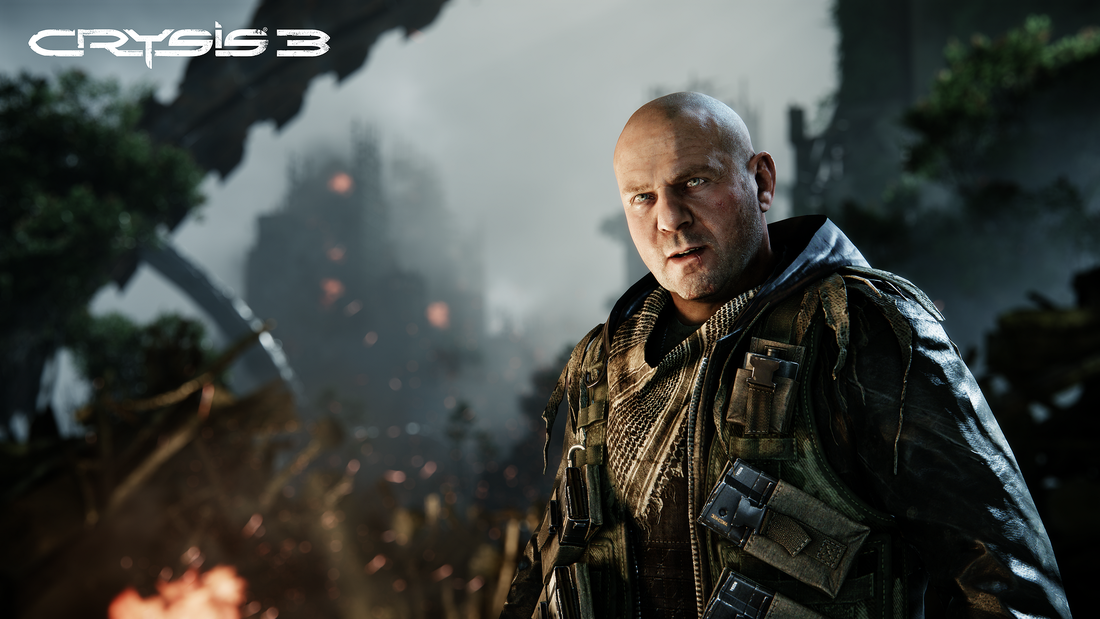 "So &mdash; the personal story and the wider conflicts in the world mirror each other, and ask similar questions," Hall said. "A big part of playing Crysis has always been about managing power, how best to use the suit, so we wanted to grow that theme out into the story of the characters and the world."

Hall says the decision to extend the story about the costs of personal power onto a global stage was in part spurred by the very real concerns at play in the world right now about an over reliance on fossil fuels.

"A lot of people are angry right now with the various fat cats who seem to be able to do whatever they please while the rest of the world suffers for their actions," Hall said. "I think we all wanted to put people like that in Prophet's sights."

While the fictional solution to the world of Crysis' energy problems adds a level of intriguing complexity to the game, (characters, for instance, are forced to commit heinous acts to pay off their debt) it's not something blatantly explored.

Hall says the context, while subtle, is important.

The fast-paced nature of the game means it's hard to slow down to discuss the dangers of a looming energy crisis, but the context adds an important weight to the fiction.

"As a writer, you want to make the world as real and solid as possible, but sometimes the best way to do that is not to hammer every aspect of the story &mdash; just let the player feel it, soak it in by osmosis," Hall said. "There's a lot of work gone into the story world this time around, I went way beyond my remit in putting all sorts of extras in there for people who really want to look. I always feel that when the world and the characters feel solid, the stakes are so much higher."

"This is the end of Prophet's story, but the Crysis universe is a big place. There's a lot still to tell."

Hall added that he doesn't think every player needs to get every reference for the game and its story to work.

"I think good stories should be clear for the people who want to experience them at the surface level, but also full of levels and depth for people who really want to invest in them," he said. "So I don't feel that players have to notice everything, the idea is to create a world full of story, and let the player explore that to whatever level they want to."

Crysis 3 also has to bring together the loose threads of the earlier games from the series to, hopefully, conclude what at one time was an overly complex story line. That's something Hall is convinced this latest game will do.

"Hopefully, Crysis 3 unites the story world, bringing the first two installments closer together and then paying them off," he said. "There's a lot of questions answered &mdash; the true nature of the Ceph, why they look different in Crysis 1 to Crysis 2, what their ice sphere was all about &mdash; I wanted to bring a lot of these things that have always been vague into focus for the final installment. Questions will be answered!"

And just because this is the third game in a trilogy, it doesn't mean that developers Crytek are finished with this world they've created.

"This is the end of Prophet's story, but the Crysis universe is a big place," Hall said. "There's a lot still to tell."

The Rings of Power shows the cost of doing good