Share All sharing options for: Crysis 3 review: one small step

Review and information for Crysis 3

Crysis 3 is determined to knock you out.

Crytek has said on record that its goal is to make the best-looking game ever created. The studio has succeeded. Playing through the third Crysis game (not counting the standalone expansion Crysis Warhead), I was stunned again and again by what was coming out of my PC. We've been talking for a year about the possibilities of the next generation of video game hardware, what it will look and sound like. Crysis 3 answers that now.

It maintains such a consistent onslaught of spectacle and beauty that it takes some time to realize how little Crysis 3 has going on. Crytek still has most of the same systems in place that made the other Crysis games engaging exercises in superhuman tactics mixed with first-person shooting. But a considerably less engaging playground and some ill-conceived additions serve to bleed Crysis 3 of its hereditary muscle. Crysis 3 never manages to employ the Nanosuit-oriented brilliance of previous games, but it doesn't ultimately matter — it never seems to ask much of the player, either. 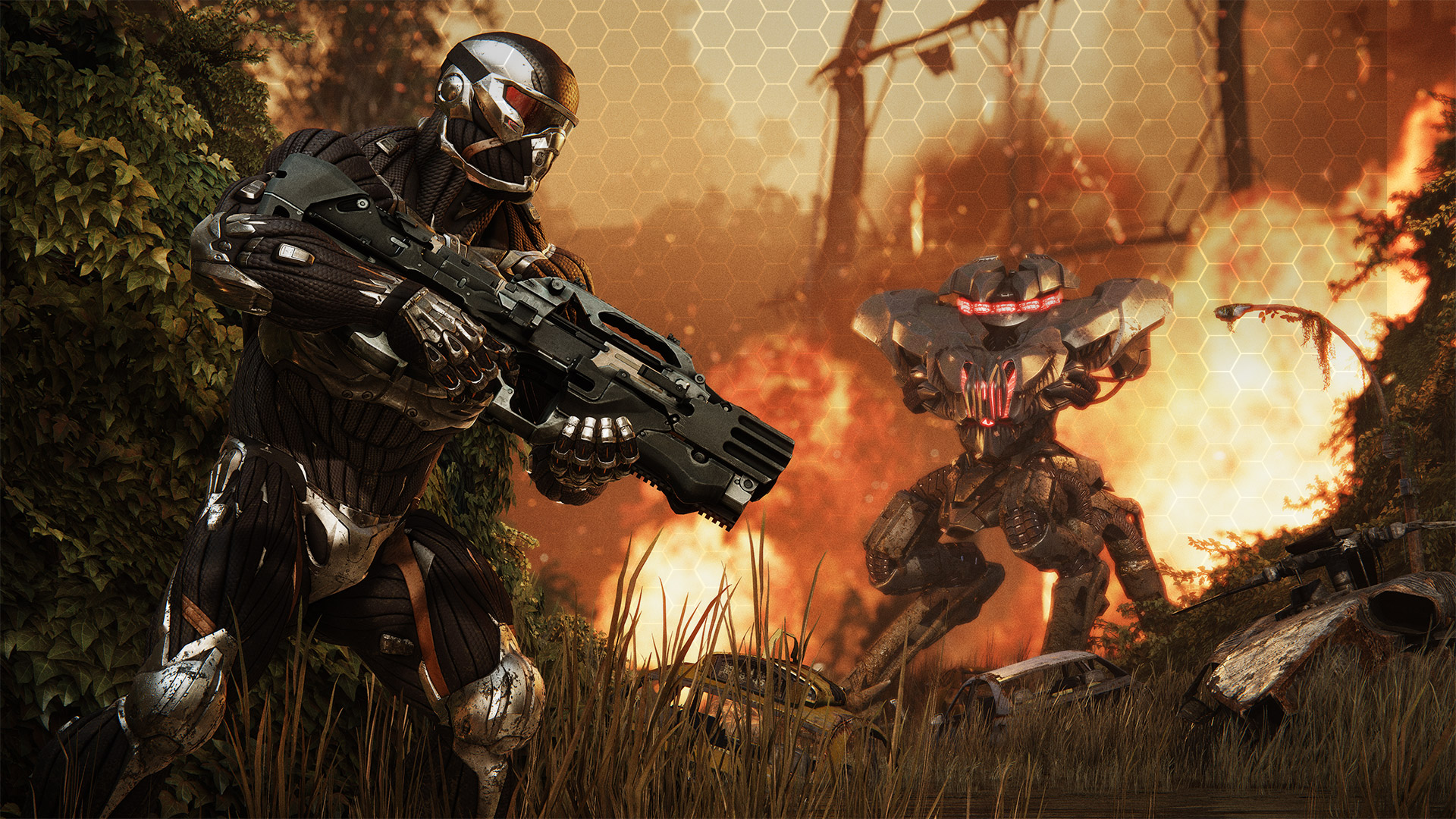 Crysis 3 starts a couple of decades after the conclusion of the last game. New York City remains in ruins after a cybernetic super-soldier known as Prophet thwarted an invasion from below by the alien Ceph. Outfitted with a combination of alien DNA and human technology known as the Nanosuit, Prophet sacrificed his own body and an unknown amount of his humanity to get the job done, and now he's imprisoned and set to be dissected by the Cell corporation for his trouble. As Crysis 3 opens, Prophet is rescued by an old friend with a plan: to breach the remains of New York and unravel a conspiracy involving a new energy economy and the ghosts of the ill-fated Ceph invasion force.

The urban environments of Crysis 2's New York have been overgrown by rampant vegetation, turning the city into a concrete-laden rainforest contained under a glass canopy. This Liberty Dome is a setting with a lot of promise, though Crysis 3 never manages to do much more with it than cross off the disaster-porn checklist. Landmark submerged by a swamp? Check. Ruined library? Check. Planet of the Apes reference? And how! 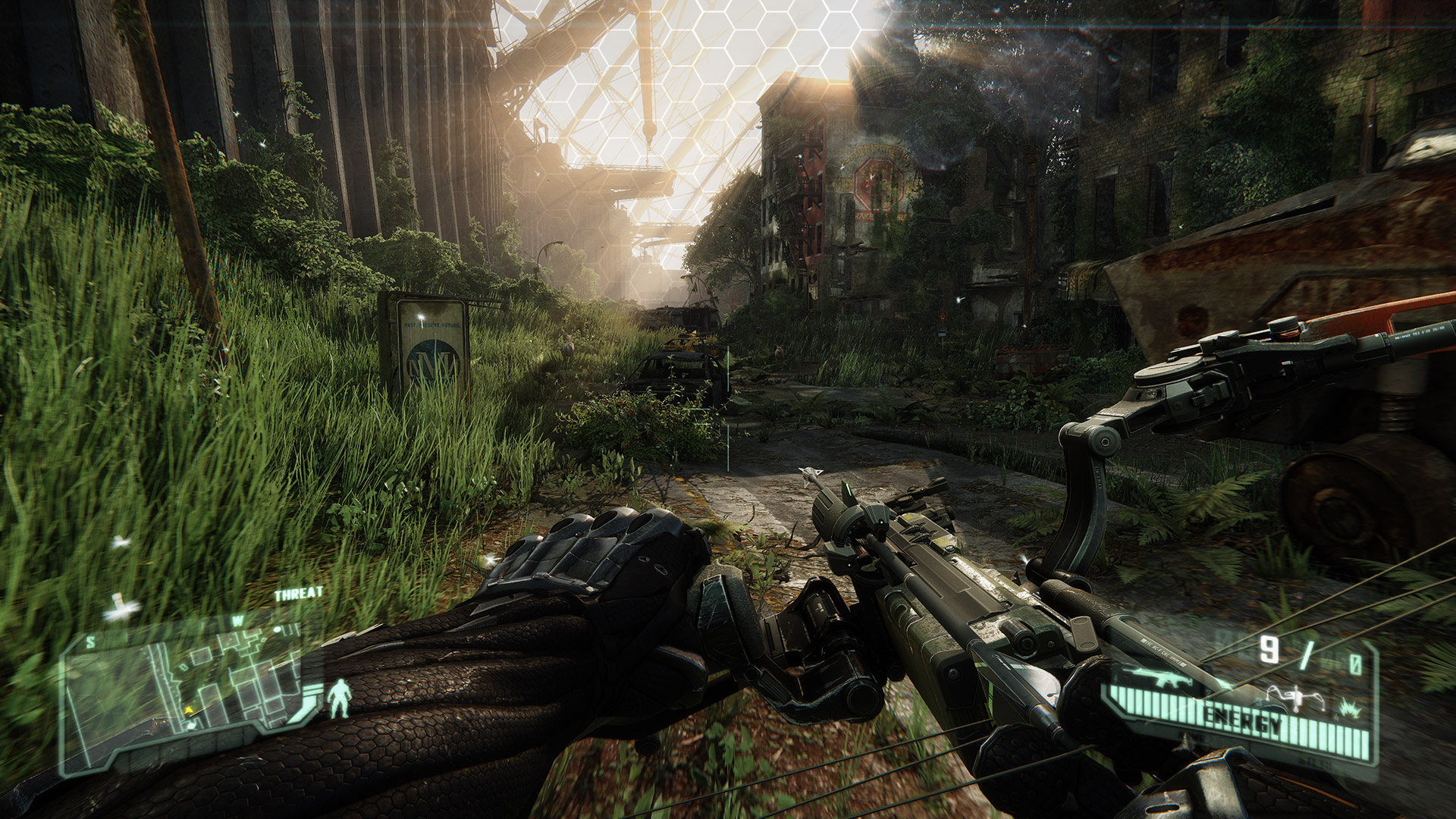 The less said about the story, the better. The interesting ideas of humanity and free will, capitalism and war profiteering from Crysis 2 are buried beneath one of the dumber skeletons of genre contrivances I can remember. Crysis 3 pays lip service to those aforementioned themes here and there, but it's more content to telegraph obvious story twists and to contort events to awkwardly fit the plot like it was following through on a dare. It would be a little bit offensive if it weren't all so stupid.

It's also easy to get lost enough in Crysis 3's visuals and soundtrack to ignore most of the more egregious narrative missteps. Sure, the script is dumb, but the human character models are so fantastically well-rendered that it's hard to pay attention to what's coming out of their mouths. And the story in the Crysis games has never been great. The graphics have done some heavy lifting, but the majority of the weight has always been carried by their mechanics.

The same basic foundation established in Crysis and rebuilt in Crysis 2 is still present in Crysis 3. Weapons are modular tools that can be reconfigured on the fly to suit your play style — each weapon has a variety of sights, grips, attachments and fire modes. The basic gunplay is quick and responsive, and weapons have a great sense of heft and volume. But guns aren't what sets Crysis 3 apart. 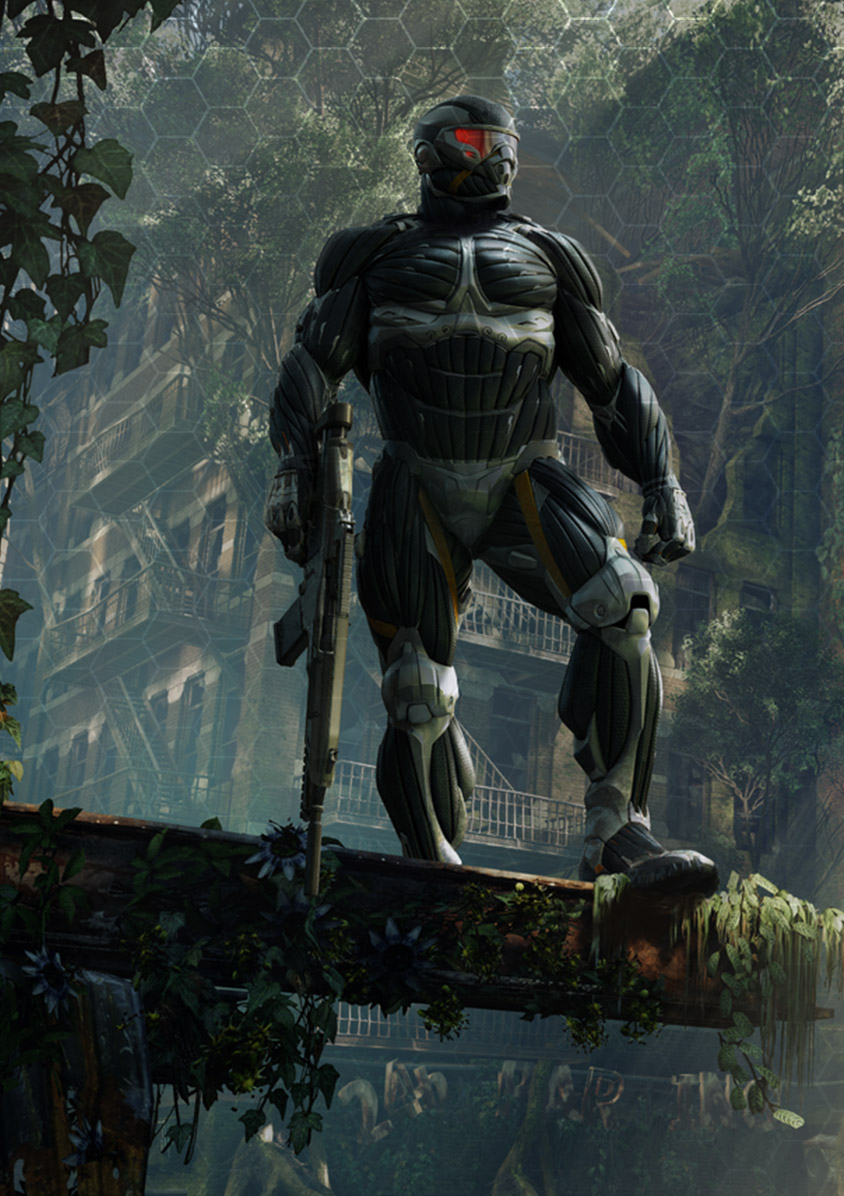 The series-defining Nanosuit remains the game's driving force. The Nanosuit offers a sense of raw physicality unlike any other first-person game out there. There's something fundamentally satisfying about sprinting toward an impossible jump and just making it, your avatar grabbing at the ledge and hurling itself up and over, only to cloak and sneak forward to play the part of silent killer. In turn, activating the Nanosuit's armor mode, basking in invulnerability and laying into a group of Cell agents or alien Ceph with an M60 is rewarding in its own way.

Previously, Crytek made using the Nanosuit's laughably overpowered arsenal rewarding by limiting how far it could be pushed. Despite the Nanosuit's finite but slowly regenerating reservoir of power, Crysis has always lived and died by the quality of the playground in front of you. The first game presented a wide-open tropical jungle to navigate that forced players to juggle conservation with power usage. Crysis 2 encouraged more vertical thinking. The series has always shined the most when each new area served as an escalating test, forcing you to intelligently juggle your various abilities to succeed. And in that regard, Crysis 3 suffers deeply from a very simplified playground. In some ways, it seems to take the worst parts of its predecessors.

Crysis 3 covers its bases with all the multiplayer modes you'd expect from a modern shooter. Nanosuit abilities set it apart from the pack, obviously, and the physicality present in Crysis 3's single-player campaign translates fairly well to competitive play. There's something pretty special about watching a bunch of superheroes cloaking and leaping and generally wrecking each other, though the standard experience level trappings courtesy of Call of Duty feel depressingly by-the-numbers.

However, it's Hunter mode that stands the best chance of finding a following. Hunter mode designates a pair of players as, er, Hunters, who are outfitted with Nanosuits and bows. All other players are normal human soldiers, sans superpowers but packing much heavier firepower.

In my time with Hunter mode, I was struck by how much more fun I had as one of the hunted — it was a nice change of pace from the specific Crysis power fantasy to have to run and hide and play smart, rather than operate like some kind of movie monster.

As in the original Crysis, many combat areas are huge, flat and under-populated, patrolled by enemies that are woefully underequipped to present any sort of challenge or force you to strategize on your feet. Other sections are comparatively enclosed spaces with a few sparse levels of varying altitude that serve mainly to obscure any view of the atrocities you're wreaking on the poor saps who were assigned to the "lobby" area.

But the most destabilizing element in Crysis 3's level design is the seemingly innocuous — and initially awesome — bow.

Previously, using any weapon save for a knife in service of a stealth kill would break you out of your cloaked state and deplete your energy stores. You could get around this by briefly uncloaking, firing and then recloaking, but that whole process required skill and timing, and pulling off a long-distance headshot on an enemy in this way was incredibly satisfying for that very reason. Eagle-eyed enemies had a good chance of seeing you in that split second of visibility. It was another risk-reward situation, and granted, this requirement is still present in Crysis 3 — if you fire a shot while cloaked, you're boned.

Crysis 3's bow does away with that necessity entirely — you can fire the bow without uncloaking, and it's nearly always a one-hit kill. I found this immensely satisfying at first. As a Crysis veteran, I had been given what felt like the right hand of a vengeful deity. But the removal of the stealth/weapon use dynamic nearly breaks the game.

There's almost never a good reason not to use cloaking and the bow. You can only carry nine standard arrows, sure, but walking over a corpse conveniently picks that arrow back up, none the worse for wear. Over the course of Crysis 3's 6- to 7-hour campaign, I killed 362 enemies. 213 of them were with the bow, and I retrieved 183 of those arrows.

The bow would likely be less of a balance destroyer were it not for the shockingly stupid AI that plagues Crysis 3. Almost every combat encounter involved a variation of the following: shoot enemy with bow; wait for enemy to investigate body; shoot investigator; repeat. It didn't matter whether I was fighting humans or Ceph. Just about everyone under the Liberty Dome is suicidally curious. It makes each new area more like a to-do list than anything else.

Even without the bow, enemies are too easy to fool, and it's trivial to use the upgrade points you find to focus exclusively on increasing your cloaking abilities and energy reserves. Occasionally, Crysis 3 finds its footing and returns to form, particularly in the latter half of the game, when Crytek contrives reasons to use your other suit abilities and non-arrow-powered equipment.

It's frustrating, because later battles only serve to underline how much wasted opportunity is present in Crysis 3. There are moments of greatness, particularly when a clever environmental layout is paired with capable enemies, which forced me to really consider my options rather than skulk around like some kind of serial murderer. It would have been even nicer to see some of the more powerful enemies paired up with larger numbers of infantry units, as the game rarely turns the odds against you.

Crysis 3 has a strong foundation, but never seems to ask for much from the player

That might be the thing that stands out the most to me about my time with Crysis 3. I enjoyed myself despite how much of a step backward the entire game feels from its predecessors. It's a beautiful game with jaw-dropping production values. But it took me a few hours to realize how empty Crysis 3 feels. The best thing I can manage to say about it is this: It didn't get in my way. But I would have had more fun if Crysis 3 had put up a fight.

Our review of Crysis 3 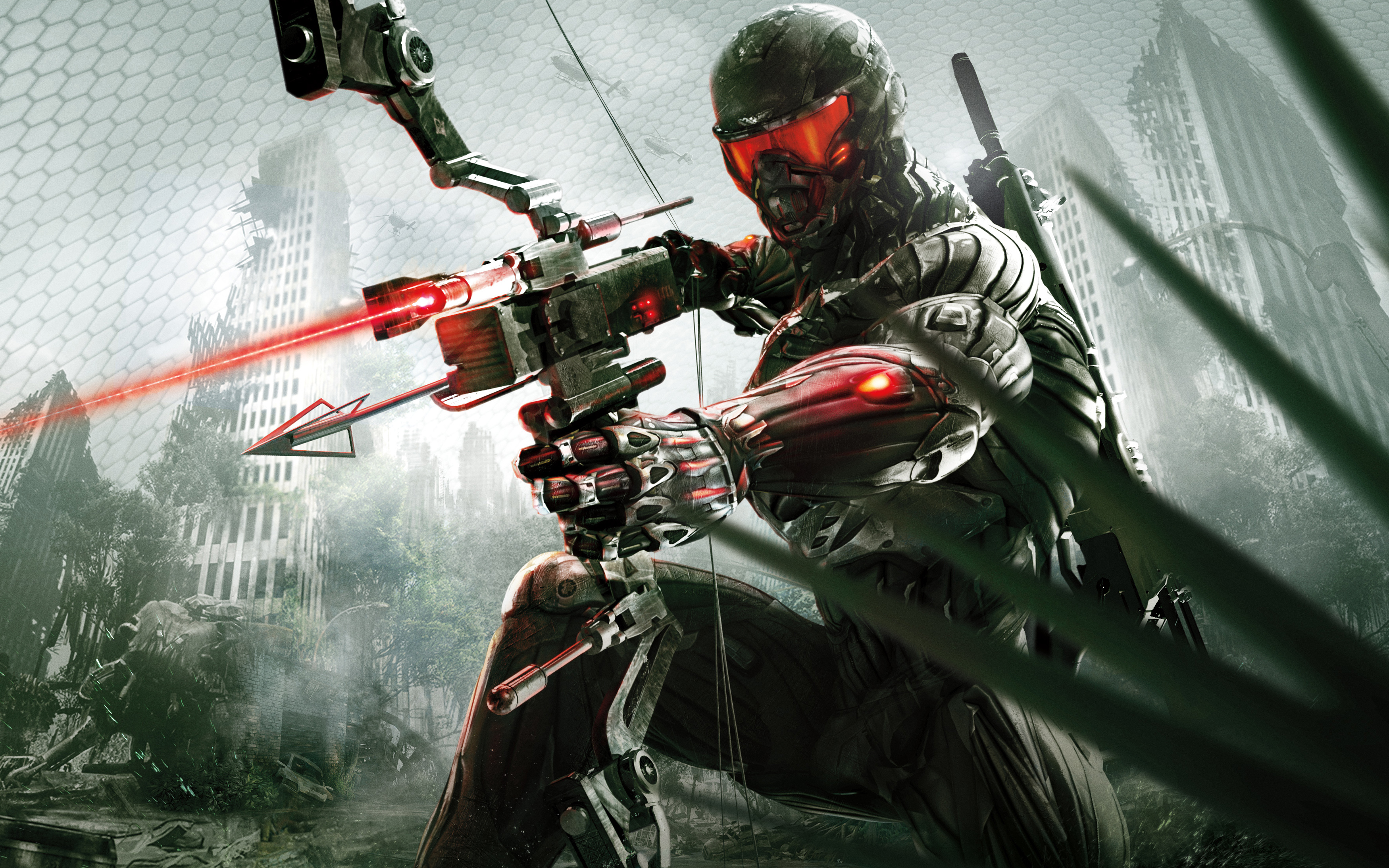