Tomb Raider's cinematic elements don't get in the way of an intense, polished adventure

Share All sharing options for: Tomb Raider review: the descent

Tomb Raider feels sure of itself.

For a reboot of a series that had lost its focus and purpose, gathering fifteen years of baggage over the course of nine games, Crystal Dynamics' new shot at Tomb Raider shows remarkable confidence. It has all the pieces of a cinematic third-person action title, but it isn't afraid to give players control and let them loose in large areas. It doesn't hurry players along from setpiece to setpiece. It breathes. It has faith in its audience's intelligence.

This trust in the player pays off. What begins in Tomb Raider as a shipwrecked prison ends up feeling like home — and that transformation into a free-form action-adventure game is more powerful than any fast-paced, forced narrative could have been.

It's not long before all pretenses of Lara's weaknesses fall away and she's running through a village of enemies, guns blazing and screaming for blood

Tomb Raider introduces a younger version of series heroine Lara Croft as an archaeology-obsessed young woman bound for a group of stormy islands known as the Dragon's Triangle. When her ship crashes, separating Lara from the surviving crew, she's forced to explore, survive and uncover the mystery of the island's strange, hostile inhabitants.

While Tomb Raider starts with Lara's journey from regular person to "survivor," most of that transformation takes place in the narrow first few hours. As Lara pushed through narrow caves, crawled along ledges, killed her first animal and scavenged for parts with often minimal input from me, I worried that the whole game would be like this: heavily cinematic, low on actual interaction and full of inoffensive but unappealing quick time events. Those fears proved unfounded.

As Lara's arsenal grows and as she moves from fighting wildlife to fighting people, the pretense of her weakness drops away, outside of a handful of cutscenes and one particularly brutal (and effective) gameplay sequence. Tomb Raider becomes less narratively unique — it's not long before Lara is running through a village of enemies, guns blazing, screaming, "I'm coming for you!" like a blood-soaked action movie star — but the clichés serve the gameplay.

Few action games come close to the level of control that Tomb Raider provides. For example, after Lara makes a deliberate jump in one direction, you maintain the ability to change where she's falling in mid-air. This air control sits at odds with the emphasis on realism found in Tomb Raider's presentation, but it makes the platforming less linear and demands more from the player. Likewise, you can leap between locations — say from sliding down a rope to climbing up a rock wall with your pickaxe. The speed of these changes makes Lara's animations look awkward and unnatural, but it feels right.

Tomb Raider still employs some of the cinematic touches popularized this generation, but their execution doesn't limit players. Lara isn't magnetized to grab nearby surfaces when she jumps near them. She doesn't run into invisible walls preventing her from climbing any higher. Outside of scattered setpiece moments, the closest Tomb Raider ever gets to funneling players down a single path is blocking certain areas in ways that can't be cleared until Lara has found the right gear upgrades. Even with the equipment-based "gating," I suspect there's room for sequence breaking to be discovered. Instead of constraining the player's path in the interest of movie-like storytelling, Tomb Raider is confident enough to let players go where they want. It's refreshing. 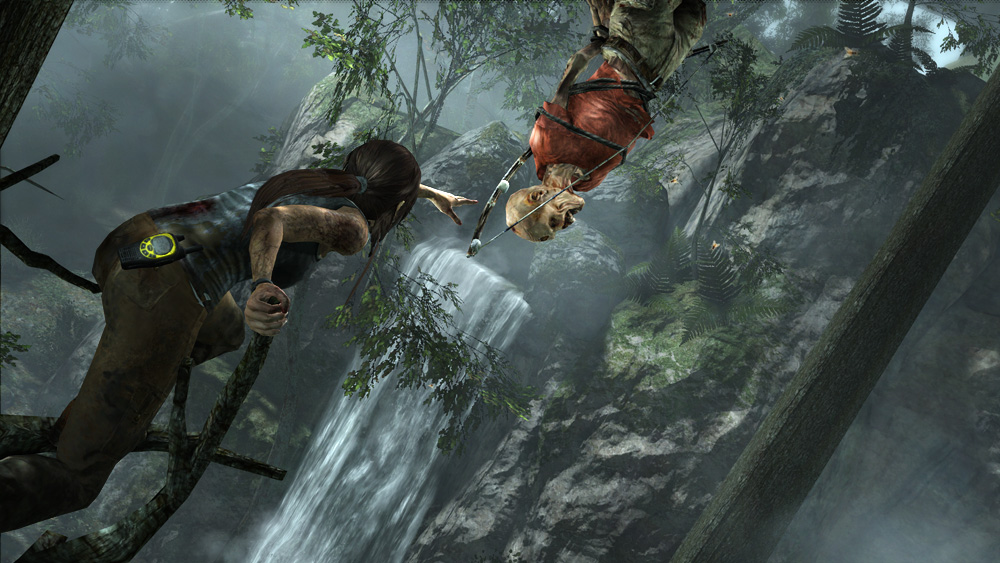 That freedom is provided within a location worth exploring. The Dragon's Triangle isn't an open world exactly, but it's far from a jungle-themed series of hallways. Each major location has multiple zones, most of which are wide open for Lara to explore however she wants. You can breeze through the game, quickly going from objective to objective, but exploring pays off. Every side path, every lone faraway cliff has some bonus waiting — salvage that can be used to upgrade Lara's weapons, boxes that give experience points or short diary entries that help you piece together the history of this strange place. I stumbled into an addictive loop that had me combing every inch before I could move on.

Tomb Raider's multiplayer mode is a strange inverse of the single-player. The latter pulls together many of the best traits of the current generation of game design; the former, many of the worst — specifically, shoehorning in multiplayer where it's not needed.

Developed separately by Eidos Montreal, Tomb Raider's various multiplayer game types pit survivors — using models from Lara's crew of castaways — versus scavengers in the form of the various enemies encountered in the single-player game. Whether trying to hunt down medical supplies, capture radio towers or just have a higher team kill count by the end, most of the maps successfully push the opposing factions into meeting points that quickly become a source of non-stop bloodshed.

Though it offers the standard suite of leveling and customization options, the gunplay just isn't strong enough to make this multiplayer mode fun for long. From bow shots to grenades to traps, too much of Tomb Raider's arsenal is focused around instant death. This works in single-player because it makes you feel powerful; in multiplayer, it has the opposite effect, leaving you staring at a respawn timer for far too long during a bad run.

Tomb Raider provides more mobility than the average online shooter, but that's only enough to make it feel novel, not good. Since it was announced so close to launch, it's not shocking that this multiplayer mode feels like an afterthought, but it's especially poor stacked up against the incredible solo game. -P 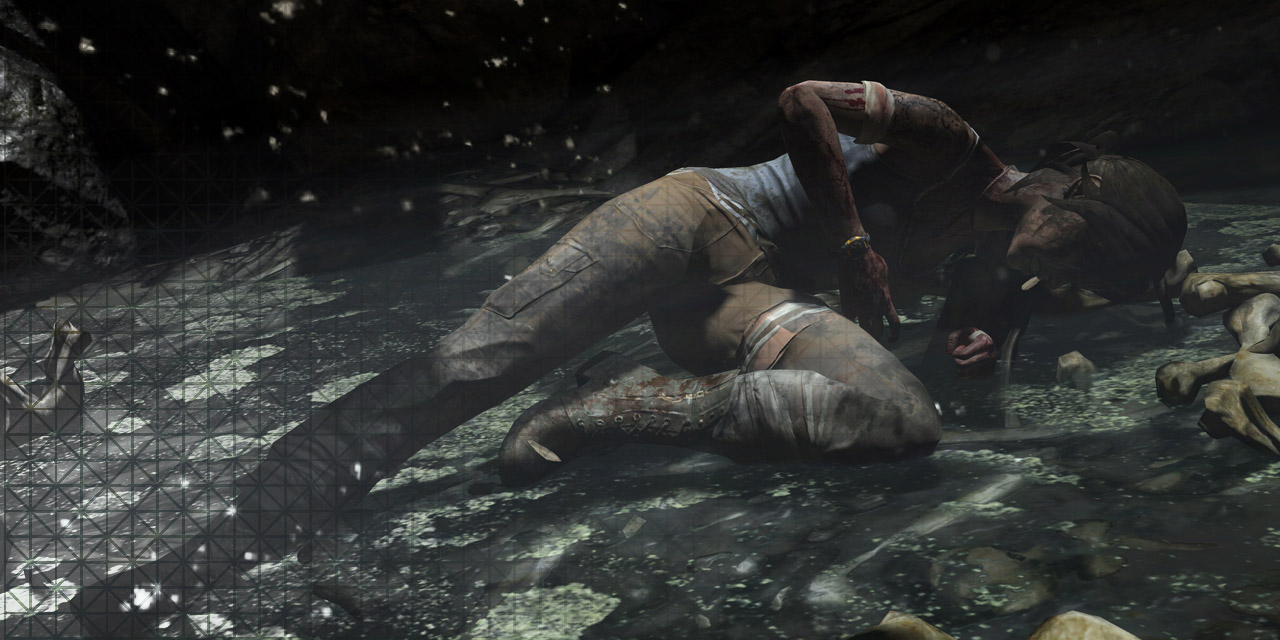 Tomb Raider walks a precarious balance between realism and fantasy, and in a few cases that balance tips in an uncomfortable direction — particularly in its infrequent death animations. Sometimes a mistake is followed by a quick fade to black and a checkpoint reload. But sometimes the game shows a disturbingly detailed vision of Lara's demise. You can see the exact angle that she breaks her neck against a rock or hear the gurgle of blood as a spike stabs through her stomach. In a single-player campaign where every element feels carefully considered, this is the one thing that seems unnecessary — a split second of gruesome voyeurism in an otherwise empowering game. These deaths didn't occur often enough to tear me away from the game, but if scenes of extreme, realistically rendered violence turn your stomach, be warned.

Each new area is populated with combat encounters that follow the same open-ish design philosophy. If you want to sneak around, you can take out enemies with stealthy melee kills and well-placed headshots from your bow. If you want to run in firing your assault rifle, more enemies will be alerted to your presence, but Lara's strong enough to withstand the extra heat. The game throws in explosives, vertical level design, multiple points of entry for bad guys and tons of other wrinkles to the combat that help make each scenario stand out. And Tomb Raider portions out gunfights just long enough to provide a break from the exploration without being frustrating. They don't overstay their welcome.

If Tomb Raider's gameplay emphasizes freedom, the storytelling works through restraint. It's not nearly as focused on realism as it pretends at first, but later supernatural elements form a creepy tonal undercurrent rather than an overwhelming narrative wave. Cutscenes are few and rarely run longer than a minute. Tomb Raider builds slowly through discovered diary entries, buried relics and environmental observations. It's subtle and thoughtful in a way I didn't expect.

Tomb Raider's cinematic elements don't get in the way of an intense, polished adventure

That unexpected thoughtfulness extends to most of the game. It's easy to point out the many ways that Tomb Raider borrows bits and pieces from other popular games of the last five years, but Crystal Dynamics has blended these disparate strengths into something remarkable. It's cinematic yet open, intense yet laid-back, fresh yet polished. It's a near-perfect embodiment of the age of the Xbox 360 and PlayStation 3 with a hint of what to expect next.Tomb Raider was reviewed using pre-release and final retail Xbox 360 code provided by Square Enix. You can find information about Polygon's ethics policy here. 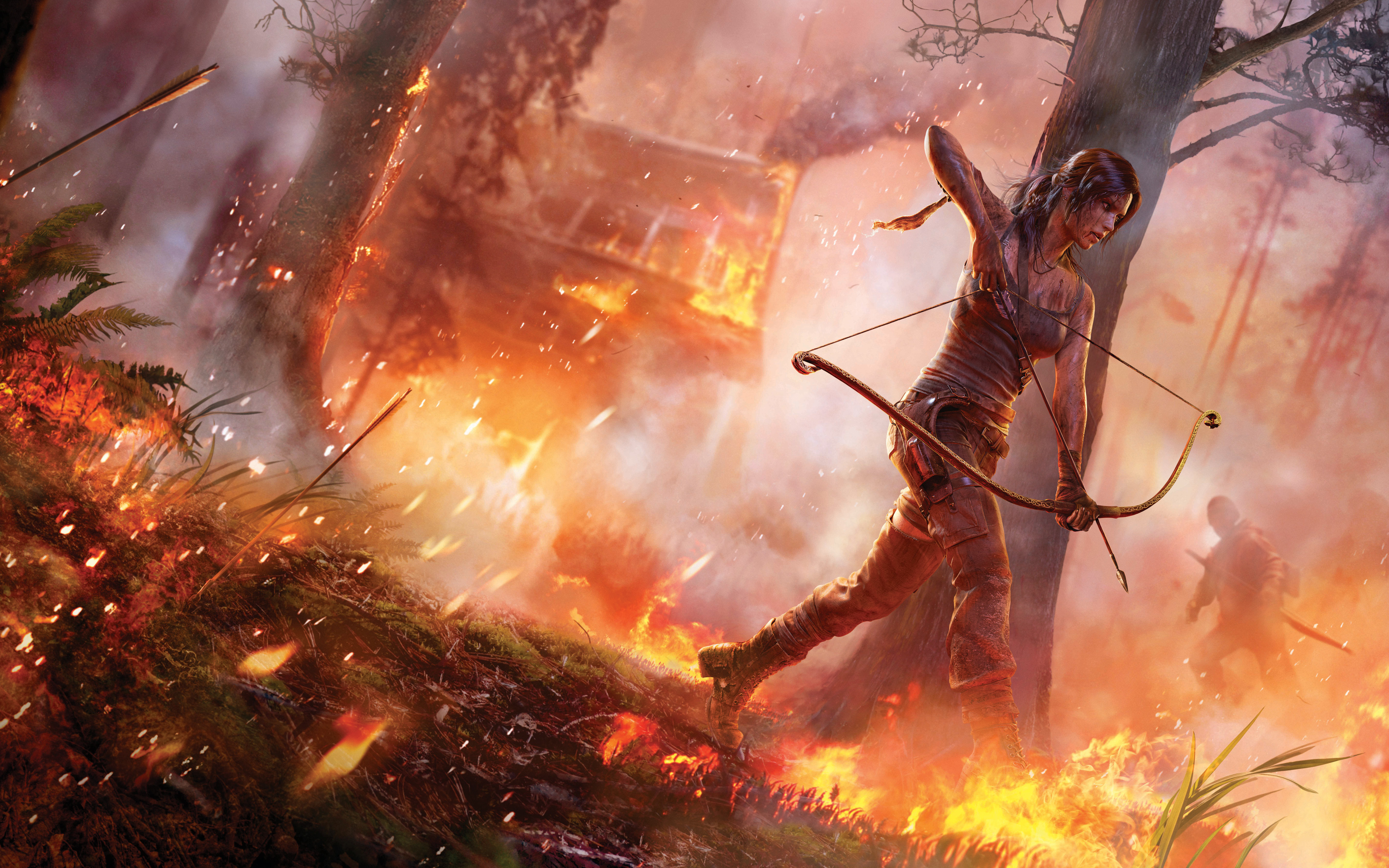 Tomb Raider: Definitive Edition brings two notable improvements with it to the PlayStation 4 and Xbox One. All of the original release's downloadable content is included. This would be more noteworthy, save that Tomb Raider's DLC offerings were limited a handful of maps for its forgettable multiplayer mode and additional outfits for Lara.

More impressively, Tomb Raider's already excellent visuals benefit from the added power of next-gen hardware. The islands of the Dragon's Triangle are more dense with foliage and wreckage, a small change that adds additional life to the environment. Character models have also received some work, and Lara in particular expresses emotions more realistically as she explores.

There are a few minor differences between the PlayStation 4 and Xbox One versions of Tomb Raider: Definitive Edition. Both have optional voice commands. But the Xbox version includes extra motion-based Kinect functionality, while the PS4 port uses the DualShock 4 controller's touchpad. These strange additions are curiosities more than game-changers. Shouting "show map" in lieu of a button press is cool, but it didn't change my experience in any meaningful way.

The frame rate, on the other hand, is lower on the Xbox One version of Tomb Raider. This was particularly noticeable during some explosive, high-action sequences in the game. However, the gameplay of Tomb Raider never requires the pixel-perfect timing that would turn a lower frame rate into a deal-breaker, rendering the point somewhat moot.

Square Enix is marketing the Xbox One and PlayStation 4 versions of Tomb Raider as the "Definitive Edition," and technically, that's true. But there's no new content here for PC, 360 or PS3 players. Most people aren't going to find a lot of reason to return to the Definitive Edition if they experienced Lara's adventures previously.

However, if you missed out last year and need something to play on your shiny new hardware, Tomb Raider is still an excellent action game and — in its new form — a great visual showcase. And while the two releases are otherwise mechanically identical, if pressed, we'd recommend the PS4 version's generally better performance.