Share All sharing options for: Command and Conquer makes a strategic move into the free-to-play fight

The next entry in EA's real-time strategy game, Command and Conquer, is a bold enough step to warrant its back-to-basics naming.

Originally a follow-up to 2003 game Command and Conquer: Generals, EA's forthcoming PC strategy game is being pitched less like a sequel and more like an evolving live service where we might play future C&C games.

Command and Conquer's creators say they want to focus on "the heritage" of the series, iterating on the core gameplay of "gather resources, build a base, build an army, kick ass." They've built the new game on DICE's Frostbite engine, the tech that powers games like Battlefield 3, and new client/server architecture that developers say will curtail cheating, make the game easier to update and reduce shared lag in multiplayer games.

During a visit to Electronic Arts last month, developer Victory Games — the team briefly known as BioWare Victory — revealed its plans for Command and Conquer and gave us an opportunity to try out their free-to-play RTS in an "alpha" state.

Victory presented Command and Conquer as a strategy game that grows over time. New military factions, new generals, new game types and even "new fiction" will be added through planned updates. Developers expect to add that new content on a "regular cadence," monitoring player metrics and community feedback to keep the game evolving and thriving.

Future updates could even include content lifted from the Red Alert and Tiberian universes, with crossovers that span the Command and Conquer series' universes a possibility, Victory says. 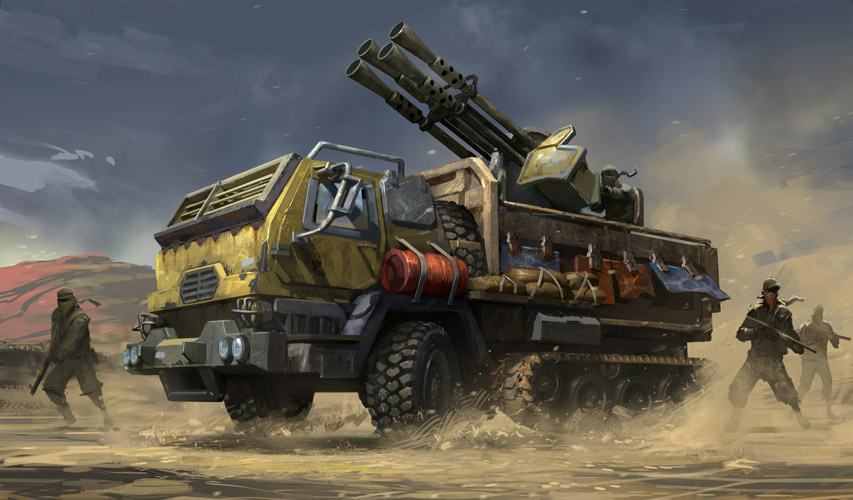 The European Union is designed to be Command and Conquer's most accessible faction, Victory says, like "slipping into a warm bath or riding a bike" for RTS veterans. Designed for fun accessibility, the high-tech units of the EU are also "deep and flexible for advanced players," Victory says. The Asia Pacific Alliance faction is targeted at players who prefer to flood a map with units. APA places an emphasis on massive power projection, with enormous hordes of low-level units, Victory says, and high-level units that only require "one or two to change the flow of battle." The Global Liberation Army is Command and Conquer's terrorist organization, a faction that employs improvised warfare through black market units and makeshift weapons. The GLA attacks with angry mobs, suicide bombers and dirty bombs, making it the least traditional — but most interesting — faction in Command and Conquer.

Command and Conquer's three initial factions will be complemented by a handful of Generals, commanders that modify each faction with special units and powers. Generals in Command and Conquer will be themed, with specializations in air power, toxic weapons or nuclear power. They'll add personality and customization, and provide one clear example of how EA and Victory might monetize their free-to-play model with add-on Generals.

"If you're someone who used to play RTS games in the '90s, there's a General for you."

Victory plans to ship with "at least four" game modes when Command and Conquer goes into beta, offering a mix of player versus player and player versus AI game types. These include deathmatch and team deathmatch modes, solo skirmishes and other game types seemingly inspired by first- and third-person shooter games, like the Horde Mode-style Onslaught. Developers say they have "many, many more in prototype" planned for future updates.

Command and Conquer's creators seem keen to provide something both for RTS veterans and game modes for those "not comfortable going online and being absolutely annihilated" by those same players.

While factions, Generals and game types were the developer's focus, Victory Games producer Brian Farina touched on some of Command and Conquer's technical and social goals. Victory plans to "beef up the social aspects" of Command and Conquer, implementing friends lists and feeds, group and private chat, achievements and the ability for players to share their gameplay stats.

Victory has its sights set on future updates that will add tournament and clan supports, plus spectator functions through livestreaming services like Twitch.

Like other free-to-play games, Command and Conquer will have opportunities for players to purchase new content. Those purchases range from gameplay components, like unlockable, customizable Generals, to visual customizations that let players tweak the look of their units. Victory promises "convenience" purchases as well, like currency gain and experience point multipliers and other common boosts that trade money for time. Those paid options can be purchased with either real money or earned in-game currency, the specifics of which were not detailed during our preview of the game.

While at EA, we got a chance to spend time with two of the game's factions, the European Union and Global Liberation Army, and two of the games Generals. Even in its early state, the game felt like classic Command and Conquer, though the two playable factions — at opposite ends of the military spending spectrum — felt wildly different in their approach.

Taking out opponents employing high-tech EU units with the GLA's swarms of Angry Mobs and Insurgents was a treat, made even more enjoyable when sneaking a Nuke Truck just past enemy lines and wreaking havoc inside an opponent's base. Wrapping one's head around the strategies of the EU and its much more straightforward tech tree, was much simpler, however, and seemingly a good starting point for new C&C players.

Also enjoyable was utilizing the special skills of our Generals to call in strategic air strikes, drop nukes or launch hidden caches of anti-air flak, superpowers that help keep the pressure on and customize the way factions play.

One of the more intriguing components of Command and Conquer is its Onslaught mode, which pits players against waves of incoming attacks from an AI-controlled military force. Given a small detachment of units with the option to harvest, invest and grow, players are asked to maintain their bases for as long as possible and complete frequent tasks, like eliminating a specific target. Challenging and refreshing, Onslaught seems like one of the game's standout modes.

EA's Frostbite engine delivers impressive visuals for a real-time strategy game, with realistic destruction of the environment and a weighty sense of real-world physics to units. Command and Conquer's use of DICE's engine seems ambitious, and the game's detailed simulation adds some visual disorder to the game. There were times during our hands-on session when it was unclear just which units were ours and which were still active, confusion compounded by the game's currently unpolished interface. Given its early state, with months and potentially years of refinement to go, it's difficult to judge just how effective Command and Conquer's implementation of Frostbite will ultimately be. Even if it plays a bit rough at this alpha stage, Command and Conquer looks fantastic.

Victory Games claims 2013 is "just the beginning" for Command and Conquer, with new universes, new campaigns and a long list of new content planned for the game.

Command and Conquer is slated to go into open beta this year for Windows PC. When asked about the possibility of a Mac release, given development of Frostbite for Apple's operating system, Victory said only that such a version is "not announced."