The Indiegogo campaign for Skullgirls developer Lab Zero Games to finish the game's first DLC character has proved successful: The funding drive reached its $150,000 goal in less than 24 hours, and the studio is moving on to stretch goals.

"We seriously have the best and most dedicated fans in the world," said Lab Zero CEO Peter Bartholow in a statement sent to Polygon. "We were hopeful we could hit $150,000 in 30 days, but in no way expected to hit it in under 24 hours."

Bartholow added that the studio has begun to receive funds from Indiegogo now that the campaign has hit its goal, which means that the developers "should be able to resume work on Squigly shortly."

Skullgirls originally launched last spring on PlayStation Network and Xbox Live Arcade. Reverge Labs, the original developer, subsequently laid off the game's development team, which reformed as Lab Zero Games. The studio is now working on Squigly, as well as a Windows PC version of Skullgirls that will be funded by Marvelous AQL and is set for release later this year. When development on Squigly is completed, Lab Zero will add her to the game in a free update for all Skullgirls owners, regardless of whether they contributed to the Indiegogo drive.

As of this writing, more than 2,800 people have contributed in excess of $175,000 to the Indiegogo campaign. Check out Lab Zero's image thanking the backers below. 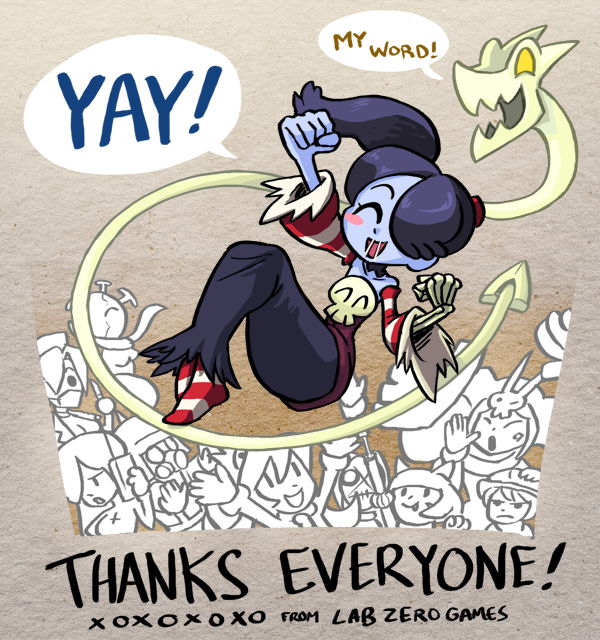