Anyone can play Bit.Trip Runner 2.

Gaijin's latest Commander Video-driven installment to the Bit.Trip series is less complicated than its full name — Bit.Trip Presents Runner 2: Future Legend of Rhythm Alien — would have you believe. As Commander Video, the player is propelled to the right side of the screen. You jump over, slide under, kick through and spin around obstacles on the way to a finish line with the tap of a button or flick of a joystick.

Hit an obstacle and an invisible string yanks the Commander back to the beginning or the most recent checkpoint. If you desire a little extra challenge, there are items to collect and alternate routes to explore.

It's nearly as accessible and very similar in play to its predecessor. But the original Bit.Trip Runner, with its chiptune soundtrack, chunky retro graphics and vicious difficulty felt distinctly niche.

Bit.Trip Runner 2 is the opposite: still simple, but more mainstream. It's a game for everyone.

Bit.Trip Runner 2's broad appeal starts with 3D environments seemingly plucked from a computer-animated children's film. The peppy soundtrack calls to mind the best songs from the iPhone's casual catalogue — which might sound like an insult if you haven't heard tunes like this one.

After only a few hours, I was a running pro, accomplishing inhuman feats that seemed impossible before. 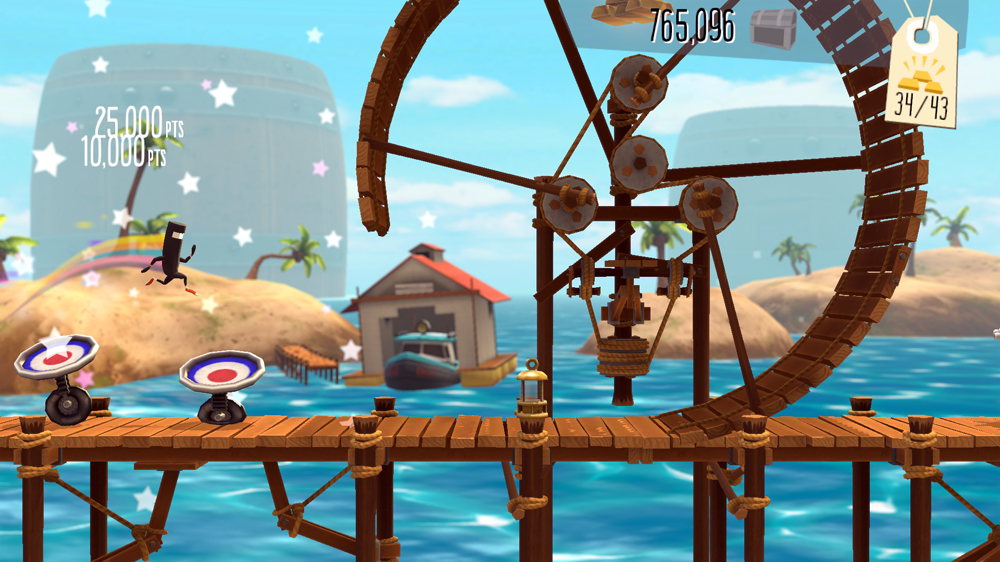 The game is situated in an inviting universe, with characters that move like puppets and a world that appears born fully developed from the minds of Sid and Marty Krofft. Everything has a face, from the trees to the stop signs. You meet a monocled pickle and a wobbly automaton, unlockable characters both. They float, glide and slide past obstacles in unnatural and comical ways, as if tugged about by marionettes.

That world and the game living in it lean hard on their musical accompaniment. The action is tied to a soundtrack syrupy enough to make your teeth ache and pop-y enough to stick to your brain. While cleaning my apartment, I noticed that I'd subconsciously left the game on pause to keep me company. Bit.Trip Runner 2's soundtrack and sound cues are so good and so vital to the experience. I enjoyed it much more with volume on — and could barely play it with the volume off.

The game fosters this sense of synesthesia. In my head, a wall triggers the kick button, a hurdle the jump button, and the music sets the rhythm.

Bit.Trip Runner 2 is a simple, beautiful game for everyone

Bit.Trip Runner 2 uses a simple premise, a beautiful universe and a giddy set of songs to conjure an overwhelming sense of happiness. It's a game everyone can play. After completing 100-some stages, I've returned to hop and slide across the landscape with ease. I feel skilled, as if I'm playing an instrument. Each button strikes a harmonic note, each stages composes a lovely song. It's music to my eyes.