The Last of Us hands-on: High tension

Share All sharing options for: The Last of Us hands-on: High tension

Every sound is a terror in The Last of Us, Naughty Dog's post-apocalyptic adventure for the PlayStation 3. Every queasy, guttural clicking from a full-blown fungus-infected walking dead, every creak and bump from the crumbling buildings of a Boston ravaged by a global pandemic, they almost hurt.

The screeches and rumbles of The Last of Us are what had me on edge while I played through an unnerving, 30-minute chunk of Naughty Dog's survival horror game. The sound of footsteps from something stumbling around on the floor above you, the horrible metal-on-concrete sound made when moving a desk, they punctuate the silence of a dead city.

In the first playable demo of The Last of Us, shown at a PlayStation event in Hollywood last week, protagonists Joel and Ellie — along with Joel's smuggling partner Tess — enter downtown Boston. It's raining. The sound of water puddling, tapping on the roofs of deserted cars, provide a sense of place. This is an ordinary rainstorm soaking an extraordinary situation.

The section of Boston Joel, Ellie and Tess are in is deemed the Outskirts. It's beyond the border of a quarantine zone in the city's North End. The quarantine zone is where Ellie has spent her entire life, The Last of Us creative leads Neil Druckman and Bruce Straley tell us; and Boston is where Joel and Tess do business as smugglers. They run guns, drugs and ration cards. They even smuggle humans; in this case 14-year-old Ellie.

Ellie's being escorted out of the military-controlled quarantine zone by Joel and Tess to a group known as the Fireflies. We get the impression that we know as little about the role of Ellie and the Fireflies as Joel and Tess do.

The Outskirts is a bombed out wasteland rife with humans infected by the fungus that has turned millions into savage beasts. The Infected come in (at least) two forms: Runners and Clickers.

Runners are humans in the early stages of infection. They can see you, they can chase you and they often work in packs. If they see Joel, they'll charge, flinging haymakers until they connect and — if other Runners are nearby — overwhelm him. 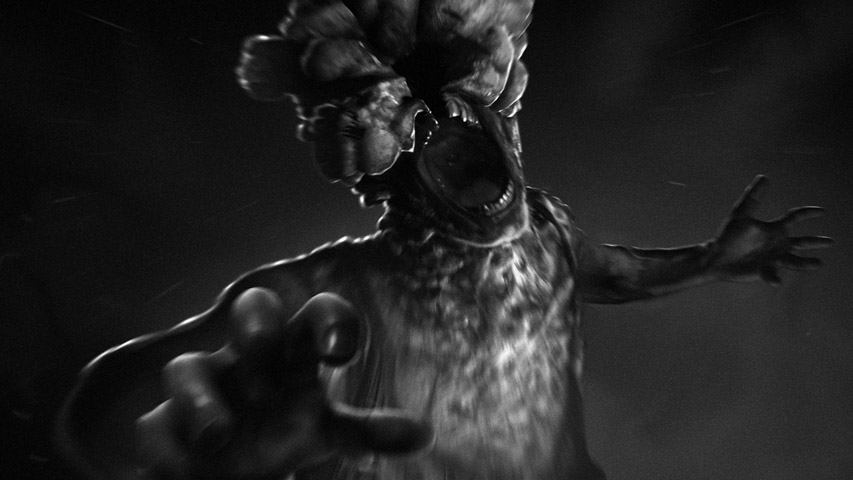 As the fungus takes over, the infection blinds its host. Faces explode in a blossom of gore. They become Clickers, "a fate worse than death," Straley says. Clickers use echolocation to scan their surroundings, emitting sharp rapping sounds that can help them pinpoint Joel's location. If they hear the sound of his movement or gunfire, they'll hone in. Being attacked by a Clicker is essentially instant death. With powerful, snapping jaws, they'll rip out Joel's throat in a spray of blood and artery.

Naughty Dog has equipped Joel with an aural skill of his own: "listen mode." With a pull of the DualShock trigger, Joel can focus on the sounds Infected make. In black and white, the game visualizes the groaning sounds, clicks and footsteps of Infected, helping Joel "see" through walls and aiding the player in devising a strategy with which to take Infected down.

Joel has limited means with which to fight the game's version of zombies. He'll have a gun, but access to limited ammo. Killing an infected may drop a single bullet, sometimes two. Joel often has to rely on his bare fists, bricks and bottles to kill Infected. He can sneak up behind Runners and Clickers, taking them out with a stranglehold or a shiv to the neck. Using supplies scavenged from deserted buildings, Joel can craft new weapons. A scissor and some tape will left him craft a knife, or modify a two-by-four into something deadlier. Everything is makeshift, from first aid kits to Molotov cocktails.

As players move through The Last of Us, they'll find supplies: batteries, blades, binding, alcohol, explosives and sugar. Using these elements, players can craft crude weapons and consumable items. Naughty Dog manages to ground the crafting of these elements in small, but interesting ways. Shivs and melee weapons break. Batteries deplete as Joel uses his flashlight. The process of crafting is illustrated by Joel unshouldering his backpack, rifling through it to piece items together.

In the early moments of The Last of Us — Naughty Dog says the portion we played was set just an hour or so into the game — we start to learn a bit about the relationship between Joel and Tess. They argue and talk about leaving the quarantine zone and grey market dealing for a better life. Ellie regularly prods them with questions; she's proxy for the player who isn't yet aware of the scope of the infection apocalypse. Naughty Dog's expert use of dialogue, peppered with a bit of mystery and humor, helps convince us that characters we're interacting with and the world we're playing through is real.

As the three survivors move through tilting, sagging buildings, they have a handful of encounters with Infected. In one, a lone Clicker can be distracted by thrown bricks and bottles, then evaded by crawling stealthily behind desks and columns. In another, a quartet of Runners and Clickers prevent the trio from progressing, and Joel is forced to kill. It's challenging, taking the group out one-by-one. Once a single Runner spots you, he'll alert the rest. And with limited ammunition, Joel is often forced to resort to fisticuffs, dealing a killing blow with a nearby brick.

And sometimes, Joel's only recourse is to run. The game has a dedicated sprint button for those panicked moments when to do anything but flee means certain death.

In one sequence near the end of our demo, the group made their way through Boston's subway system, skulking through pitch black T tunnels lousy with Infected. We approached it cautiously, using a death-dealing shotgun and makeshift incendiary weapons to kill Runners, which move erratically. When we watched a recorded playthrough from Naughty Dog staffers, they moved through it like expert killers, throwing bricks at the faces of Infected, disorienting them, bashing them to death with boards.

After that subway excursion, out on the streets, Joel, Ellie and Tess came to a garage door, hearing the sounds of Infected nearby. While our previous encounters were with small packs, this one was huge, bearing down on the group. It was a fumbling-for-the-keys-to-open-a-door-to-safety moment, uncomfortably tense. As The Last of Us previews are wont to do, the near-final moment of that Infected attack leads to a smash cut to the game's logo on a black screen.

Seeing that title screen was a relief. The Last of Us is a cruel sequence of high tension horror moments, a puzzle of ruined architecture where no structure feels safe, where every howl and footstep could mean death. It's a beautiful, disgusting, horrifying thing to behold.