Westerado: a classic tale of gunslingers and vengeance

Share All sharing options for: Westerado: a classic tale of gunslingers and vengeance

So begins Westerado, a free browser-based game made for Adult Swim by Ostrich Banditos. The independent Dutch studio is made up of five students, ages 20 to 25, currently attending the Utrecht School of the Arts, HKU. It's not their first game — flatulence-filled online game High Vaultage takes that title — but it is their most recent game, completed in only three months.

Equal parts adventure, exploration and mystery, Westerado is the story of one man's quest to find his family's killer. By picking up local jobs, helping Indian tribes, oil tycoons and more, players will slowly discover clues to the killer's identity. They'll do so armed only with a six-shooter and three-hat life-bar.

Although Westerado was published by Adult Swim, Ostrich Banditos retained full creative control of their work. Adult Swim provided occasional suggestions —perhaps a unicorn or a dragon to replace the player's horse, or ideas about inserting specific scenes — but the team was free to create what they wanted. And their influence was helpful in more ways than one, lead designer/writer John Gottschalk said.

"[Adult Swim] did a lot of testing for us, and often when you're developing a game, you get so stuck into it," Gottschalk said. "Adult Swim really helped keep [the game] in perspective and keep our motivation up, working the whole time for three months and keeping to deadlines."

Gottschalk and artist Jordi Boin brainstormed the basics of the game together, but their inspiration varied. Boin originally proposed a horror-styled western where players roamed an abandoned mine town with only six bullets, but the idea didn't stick with everyone.

"John isn't that much of a fan of horror," Boin said.

Ostrich Banditos dropped a creepy premise and launched as a classic western tale, inspired by the grit of more than one famous cowboy. Gottschalk took inspiration from movies like Once Upon a Time in the West and the Dollars Trilogy.

"I really like that Western setting and felt like there weren't enough games in it," Gottschalk said. "I felt like it could be a really cool place to have an exploration game." 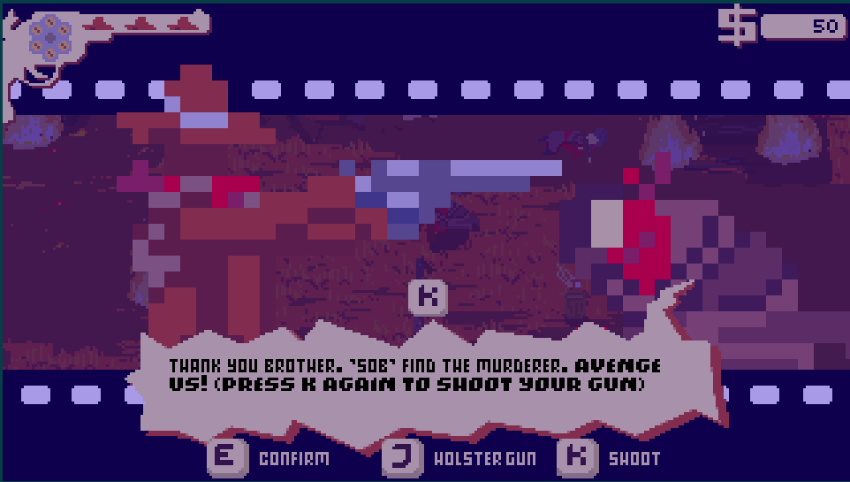 The team drew inspiration from games as well, citing Messhof's two-player pixel-art game Cowboyana. But titles like Red Dead Redemption? Not even a little.

Like Red Dead Redemption, Westerado features open-world elements. Players roam the game world using keyboard letters and are free to interact with anyone they encounter. Different NPCs will offer advice, jobs or in some cases, little use at all. After a late night of working Wyzte Kamp, the game's designer and producer, created a character that will trap players who are too polite.

"In some stroke of insanity, I had the clever idea of making a woman that would chat forever," Kamp said. "You can only creak away either by walking away or pulling your gun out ... she will basically tell her life story." 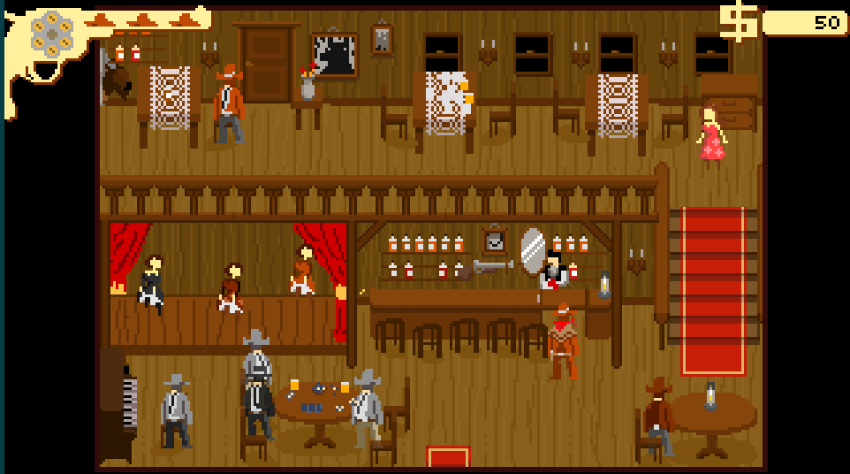 Ostrich Banditos plans to take a break from working together as a studio, at least for the time being. Three of the team's members will go on to do internships for school while the other two are focusing on graduating college. It's possible Ostrich Banditos will pitch a new game to Adult Swim again, or even pursue Westerado as a commercial release, but for now they're parting ways.

Westerado is available to play now at Adult Swim. The game's soundtrack is available for $3 at composer Sam van Lonkhuyzen's bandcamp page.