Share All sharing options for: Why Wikipad shrunk its Android gaming tablet to 7 inches for $249

Wikipad's Fraser Townley tells Polygon about the company's announcement of a 7-inch version of the Android-based gaming tablet for $249, why that model will launch before the original 10-inch device and why the 10-inch unit was delayed in the first place.

Wikipad, the company behind the 10-inch Android-powered gaming tablet of the same name and its gamepad shell, delayed the device Oct. 31, 2012 — the day it was supposed to launch. Today the company announced the 10-inch version is effectively delayed indefinitely; instead, a 7-inch Wikipad is launching this spring for $249, half the cost of the 10-incher.

"The biggest improvement is price," said Fraser Townley, Wikipad's managing director and president of sales, when we asked him to describe the changes the company made in shrinking the tablet.

As measured by Wikipad, the general consensus held that while the 10-inch unit offered value for $499, the price was still too high. The company had the opportunity to reconsider the device when it was forced to delay its launch in order to make what it described at the time as a "minor refinement" to the hardware.

Townley told us that Wikipad found a "technical issue with the controller" during the initial production run. Although he characterized it as a problem that had a "very simple, very silly, identifiable solution," the company thought the issue would lead to returns and so decided not to proceed. According to Townley, there was no way for the problem to have been discovered until the first batch of tablets was manufactured. Then "a whole host of small issues" cropped up.

"We then ran into other issues which aren't related at all, but are to do with the end of life of some of the major components [of] the tablet," explained Townley. So Wikipad halted production and announced the delay, then took a step back to analyze the company, the device and the market.

"The biggest improvement is price ... the affordability factor is what's important to people"

Wikipad realized not only that the unit's price was too high, but also that the tablet market was heading in the direction of the 7-inch form factor, a change led by the Nexus 7 from Google. "[The 7-inch category] seems to be where the market is alive," said Townley, adding that "the affordability factor is what's important to people."

At that point, Wikipad shelved the 10-inch model and accelerated the timetable for the 7-inch version.

"We took the steps that we had to take to preserve the brand," said Townley.

The 7-inch Wikipad retains all the vital components of its larger sibling. It still offers a 1280x800 IPS display; 1.4 GHz Nvidia Tegra 3 processor; 1 GB of RAM, now DDR3 instead of DDR2; 16 GB of on-board flash memory, which can be tripled with a 32 GB microSD card; 802.11a/b/g/n Wi-Fi, GPS and Bluetooth 4.0 radios; micro-USB port and micro HDMI port. The device is a bit thicker than the larger model — 0.42 inches instead of 0.34 inches — and the smaller screen supports five multitouch points, not 10. The one notable missing piece is the 8-megapixel camera on the back; the smaller model features only a front-facing 2-megapixel camera.

The tablet is running Android 4.1 Jelly Bean. Wikipad has developed a skin for the operating system, but Townley said, "We'll be deciding whether we're going to launch with that skin or not." The company may put a Wikipad spin on Android in a simple, unobtrusive way like a home screen wallpaper, but is also considering deeper customization like a software launcher or a system-wide skin.

The one thing Wikipad didn't alter is the size or layout of the controls in the detachable shell that holds the tablet. "The actual form factor of where you put your hands hasn't changed at all," according to Townley; now there's just less distance between your hands, because a smaller screen occupies that space.

Wikipad previously announced accessories including a dock and keyboard. Townley clarified that those items were "all for the 10-inch model," and added that the company still has "some work to do" in making them compatible with the new smaller version. He also implied that Wikipad may rethink the production of those accessories altogether, depending on the perceived demand for them, since the company is relatively small. 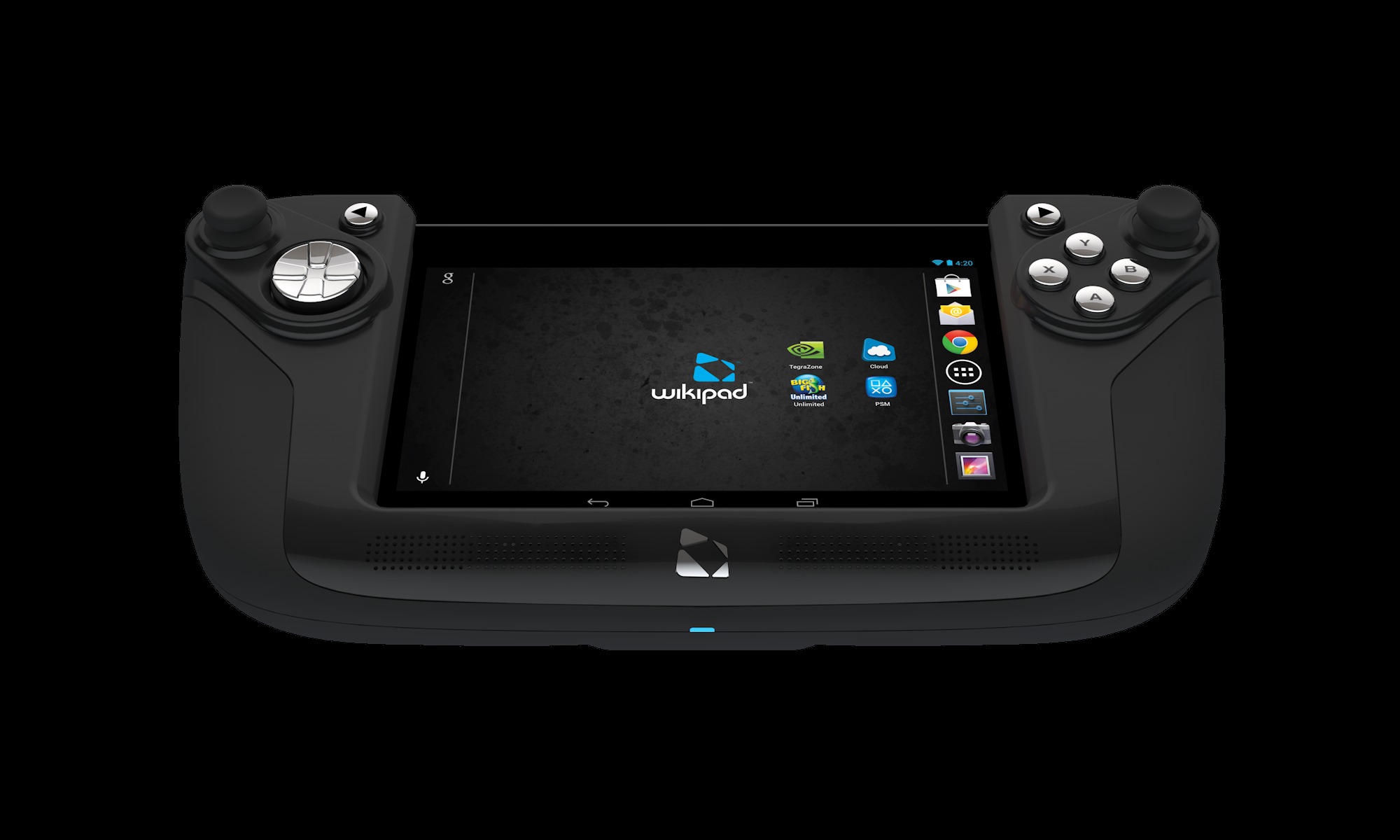 While Townley said many fans took the Wikipad delay well — and added that manufacturers, distributors and retail partners understood the reasons behind it — he admitted that "there were some disappointed people out there who had their hearts set on the product we had previously announced."

GameStop was the only retailer that had been taking Wikipad pre-orders, and Wikipad promised those customers they would receive a "special bonus gift" with their 10-inch Wikipads upon the fulfillment of the order. But now that Wikipad has put off the launch of the 10-inch unit in favor of the smaller version, we asked Townley about the status of those pre-orders and the bonus gift.

He said Wikipad is "working through with GameStop" what that commitment will be, and added, "I'm not walking away from that situation." As for the 10-inch model itself, a Wikipad representative told us that it's "still on [the company's] roadmap," and will arrive with "the latest and greatest [specifications]" when it launches.

"We would have loved to have launched before Christmas," said Townley. But he noted that a spring release could prove more beneficial to a small company such as Wikipad. "We're launching at a quiet time of year, where we have the opportunity to grow organically," he said.

The 7-inch Wikipad won't immediately be available for pre-order, but Townley assured us it will be sold at other retailers aside from GameStop. According to Townley, production on the devices is ready to begin; it's just being held up by the Chinese New Year, which is why Wikipad doesn't want to announce a definitive launch date yet.

Although he acknowledged the Wikipad is a niche product, Townley is confident that the device's revised design and price point give it a much better chance for success. Announced content partners include Google Play and all the apps in its marketplace, PlayStation Mobile, casual game company Big Fish Games and OnLive.

"In the fall, everybody who put their hands on the product said we had it right from a design point of view," said Townley. "We've taken that learning and just shrunk it."