129 days in prison: A Bohemia developer speaks out about his detainment in Greece

"It is easy to feel forgotten in prison" Ivan Buchta

Share All sharing options for: 129 days in prison: A Bohemia developer speaks out about his detainment in Greece

Ivan Buchta refers to the day he and his colleague Martin Pezlar were imprisoned in Greece on suspicion of espionage as "that wretched Sunday."

In September 2012, the two Bohemia Interactive developers travelled on holiday to Lemnos, an island in the northern part of the Aegean sea. What followed, he tells Polygon, "resembles a bad movie."

While early reports indicated that the two men traveled to Greece to aid in the development of the upcoming Arma 3, Buchta says that was not true.

'We went just to a holiday on which we planned to enjoy the beauty of the island...'

"We were certainly not doing any scouting job. The environment of Limnos (now Altis) was practically done by the time we left. Our artists won't be happy if we would suddenly start adding to the plans, and in fact, we both needed break as the summer 2012 was rather busy for us." Ivan took part in Bohemia's presentations at both the E3 and Gamescom conferences, while Martin worked on the design of both Arma 3 islands and big terrain tweaks for DayZ.

"We went just to a holiday on which we planned to enjoy the beauty of the island which has been our source of inspiration for more than two years, taste some Greek food and wine (which both was really good) and swim a bit (beaches and sea were awesome.)"

Prior to their arrest on Sept. 9, Buchta and Pezlar planned a day of relaxation. Their previous days in Greece were spent exploring the island and travelling to distant points of interest; Sunday would be calmer by comparison, "with less exploring and more swimming," he said. 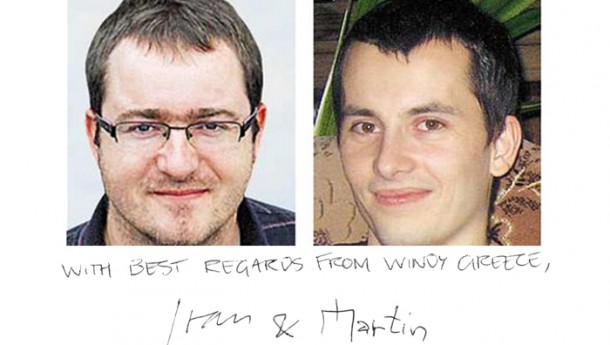 The two men took a short trip to Panagia Kakaviotisa, a mountain prayer place located near the top of Mount Kakavos in the rocky hills a few kilometers from Myrina. Buchta recalls visiting the village of Kontias, famous for its windmills, where they climbed to a hill with a small chapel and a view of the village surrounded by pine groves. Eager for a swim, they checked the beach in Thanos as a potential swimming spot, bought some water and retsina in a small shop in Platy, then eventually meandered back to their hotel.

It was around noon, just meters from where they stayed, when Buchta and Pezlar were stopped by a police patrol.

"After the check of documents, we were brought to police station where the officers started to be interested in our cameras and notebooks. Several men in civilian clothes appeared, going through all our photos and talking about the possible danger we pose to the Greek national security. We did our best to explain ourselves and cooperate on clearing the misunderstanding."

'They confirmed it's rather bad.'

It was after a "few hours" spent talking with the officers in the police station's front office that Buchta says "we started to realize that things are rather serious."

"We were in touch with consulate; they confirmed it's rather bad," he said. "Around 11 pm, we were told we are arrested because we are suspected of espionage. Our cellphones and belts were confiscated and we were locked up in the cell at the police station. I recall being rather stunned [but] after the long day, we simply dropped to mats and fell asleep."

"We certainly did not expect that thing would go as far as us being accused of espionage," said Buchta, "and when this happened, we were confident we would be able to explain our activities by the enthusiasm of people who really do like Lemnos."

'THE REAL PROBLEM IN THE PRISON ARE THE INMATES...'

Neither Ivan nor Martin had anything to hide, he explained, and despite allegations of photographing military installments on the island, the two men "definitely did not deliberately focus" on these objects. Buchta's notebook computer contained "tens or hundreds" of pictures taken during their holiday, seven of which are regarded by the Greek authorities as problematic.

"Therefore we hoped for a quick resolve after our explanation at the hearing before investigator in Mitilini," he said.

However, they remained in prison for 129 days before their eventual release on bail — 5,000 euros was required to be paid to the Greek government for the return home of each of the men, with plans to have them return to stand trial at a later date. 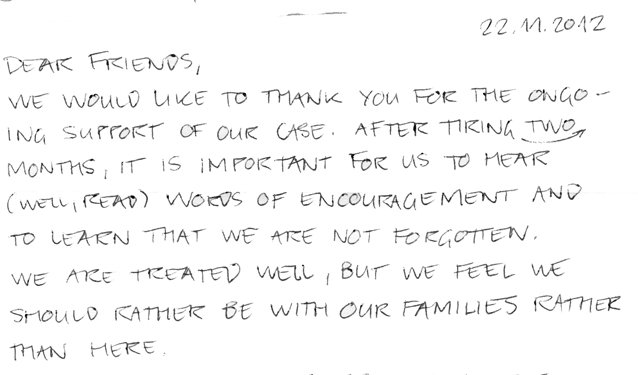 But in the months prior to their release, it was the prisoners who posed the biggest problem; not the prison. Prison, says Buchta, is designed to be unpleasant and restraining, but the two were treated with respect by the police and guard officers.

"Of course, the real problem in the prison are the inmates, not the guards," he says. "We were fortunate to not to experience any form of violence — the prison in which we were was rather small and safe, with illegal workers, drug trafficking, frauds and similar non-violent cases. Still, the selfishness is a norm there and newbies are target of scrounging; until we learned about the rules and relationships (which took about one month), I was a bit scared by this environment."

They were informed by their lawyer of the repercussions of imprisonment for espionage. If convicted, the two faced up to 20 years in jail; a mere five-year sentence was the brighter prospect.

'It is easy to feel forgotten in prison ...'

"It is easy to feel forgotten in prison, especially after being categorically accused of such a serious crime in the middle of your holidays," said Buchta.

But the men were never separated. "It was important," he explained, "as Martin was the only person nearby whom I could trust — I did my best to provide the same certainty to him. Of course we had (rather expensive) chance to call home, regular but sparse phone calls with the consul, and we were writing letters, but having a close friend in such a place was invaluable."

Letters sent through the website helpivanmartin.org provided another moral boost. "I am afraid I cannot fully express how exactly I felt when we first heard from the outside world," said Buchta, "but it was great to see how many people support us."

'We have nothing to hide and I hope the truth will come out ...'

Ivan and Martin returned home to the Czech Republic on Jan. 17, 2013, greeted by friends and family. Now in the weeks that have passed, the Buchta clan has grown with the birth of their daughter; however, while back in the safety of their families, the investigation into their alleged espionage during the holiday in Greece is not yet closed.

"As far as I know, the investigation should be closed at some point, and date of the court hearing should be established after that," Buchta said." I have no idea when this happens and what would be the further development. Although it certainly won't be pleasant to go there, we will respect all the decisions of the Greek justice. We have nothing to hide and I hope the truth will come out and the court will dismiss the charge of espionage."

Jail time: How two Arma 3 developers were arrested in Greece