The table that may be its most popular, based on The Empire Strikes Back, is also designed to be its most accessible. The playfield is wide open, with ramps, loops and lanes pushed to the far end of the table. The action moves at a moderate pace, perhaps the ideal Star Wars machine for those new to Zen's brand of virtual pinball.

On The Empire Strikes Back table, pinball wizards will reenact six scenes from the fifth episode of Star Wars through a series of challenges lifted from the film. One is based on the Empire's assault on the planet Hoth, and is split into three phases, starting with the Stormtrooper invasion of the Rebel base, the moving on to Luke's attempt to take down AT-AT's with his Snowspeeder's tow cable.

Other scenes are based on Luke Skywalker's escape from the Wampa Cave, the battle at Cloud City and the climactic showdown between Luke and Vader.

Like other Zen Pinball and Pinball FX offerings, the tables offer an experience that blends physical pinball machine hardware and impossible physics. In one gameplay mode designed to mimic Han Solo's potshots at Darth Vader on Bespin, a virtual version of the Sith lord will rise from beneath the table surface. If Vader is fired upon with a ball, he'll simply Force push the ball out of harm's way, crushing it. Even the return ramps on The Empire Strikes Back are made of lightsaber energy, extending to deliver the ball back to the flipper area.

The Empire Strikes Back uses a mix of audio and voice work pulled from the film when possible, but resorts to Lucasfilm-approved soundalikes when necessary. 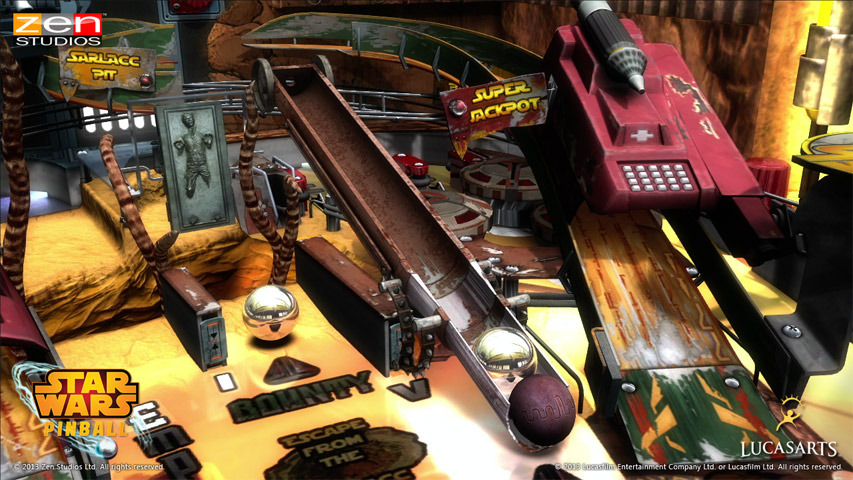 Zen's Boba Fett-based table is a bit more challenging than The Empire Strikes Back, featuring a shorter open playfield area and faster lanes. It has a few good Star Wars gags, including a Sarlacc Pit that players can drop the ball into and a spinner modeled after a carbonite-encased Han Solo.

Boba Fett's table features a series of bounties that he can hunt down, some offered by the Hutts, others contracted by the Empire. Complete a bounty and Fett's Slave I will fly in, adding a ramp just inches above the flippers, which will fly away with your ball when properly hit. One clever gimmick related to Hutt-based bounties is a captive ball set in a seesaw made to look like the security droid at the entrance of Jabba's Palace in Return of the Jedi.

The third table coming in the Star Wars three-pack is based on the Clone Wars animated show. Players will assume the role of Anakin Skywalker and his padawan Ahsoka Tano as they embark on missions from the Jedi Council. While some of the rules of this table appear initially difficult, the upper playfield is stuffed with ramps — and an extra pair of flippers. Many shots are practically guaranteed to hit some loop or ramp upfield, potentially leading to extended combos.

Zen's initial batch of Star Wars tables for Pinball FX2 and Zen Pinball 2 play very well, capitalizing on years of refined virtual pinball physics, well designed table layouts and a solid understanding of what people have loved about Star Wars for the past 35 years.

Pricing and an official launch date for Star Wars Pinball, which is also coming as a standalone app for iOS and Android devices, are expected soon.