Tearaway looks to be a world worth sticking your fingers into

Share All sharing options for: Tearaway looks to be a world worth sticking your fingers into

Tearaway is a difficult game to describe, as its core thesis — it is a game about paper — doesn't even come close to explaining what that means in the context of gameplay, aesthetics and tone.

During a hands-on demonstration at SXSW Interactive, Media Molecule lead designer Rex Crowle expanded on the gameplay mechanics inspired by Tearaway's papercraft world. It's not just the basis for the game's visuals; every gameplay mechanic and level design cue is a result of the world being lightweight, wafer-thin and extremely pliable.

A few of these mechanics were revealed alongside the game at Gamescom 2012. Players can poke their fingers into the world through the Vita's rear touchpad, one of the more widely publicized capabilities of the title. They can blow into the microphone to push parts of the world around, and fold, tear and otherwise interact with the flimsy world around them. During today's demo, more mechanics were revealed: Iota, the deliveryman protagonist, can crumple into a ball Samus-style to roll through holes in the environment. Using an air-blowing accordion, he can pull backgrounds in the environment closer to him, making huge gaps smaller and more navigable.

Those are just a handful of literally dozens of mechanics inspired by the game's papery aesthetic, the functional core of the game which Media Molecule discovered during a week-long game jam which served as the incubator for the ideas which compose Tearaway. During a SXSW panel, Crowle said he prefers the tactile feeling of childlike craft materials — clay, crayons, glue, and the like — which he's attempting to recreate with Tearaway.

"I think deep down we all kind of enjoy that childlike feeling of messing around with materials, and identifying what makes them unique, what their properties are, combining them together," Crowle said. 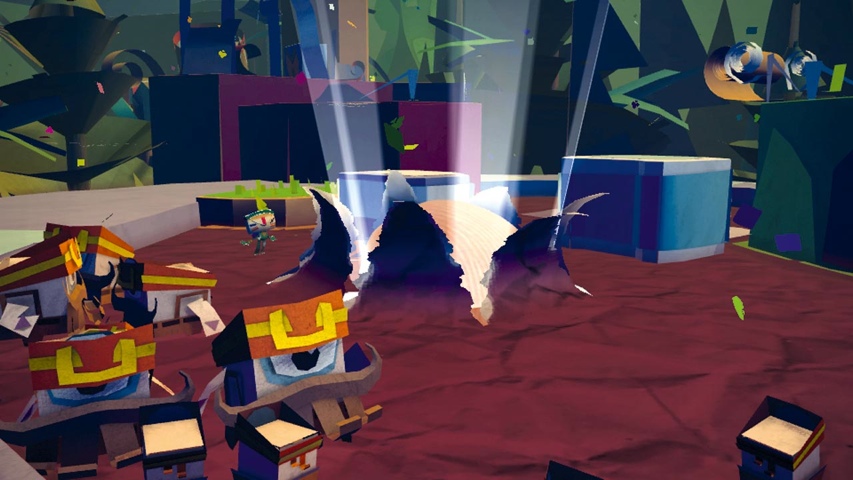 The game's tactile direction was cemented when Media Molecule first received an early version of the PS Vita, the system which Tearaway is being developed for. With its multitude of inputs, including a touch-sensitive panel and screen, Crowle said the handheld was a perfect fit for the physical nature of the game Media Molecule was trying to create.

"The real kind of jumping off point was that you're holding it with your fingers — they're your fingers," Crowle said. "I was thinking about this and, I've played a whole bunch of video games over the years, and I've never really thought about what the games think about my fingers while I'm playing. It's not like the boss alien is quaking in fear of your giant thumbs ... pressing these buttons that are annihilating them."

"...I've never really thought about what the games think about my fingers while I'm playing."

That early fascination led to a first build of Tearaway that hardly resembles the colorful world that debuted at Gamescom. Rather than featuring rough edges and the more natural elements of paper, the early world of paper featured extremely intricate and detailed papercraft shapes, viewed from an isometric perspective. The player could still poke their fingers "through" the back of the Vita, but the fingers were the characters themselves. By moving around the level, the player could cut holes in the floor which enemies could fall through, and appear in an augmented reality display using the Vita's rear camera.

Ultimately, Media Molecule moved away both from that build's mechanical and aesthetic designs; by casting the player's finger as the lead character, the developers were neglecting the Vita's other controls. More importantly, though, the ornateness of the world betrayed the game's original intention: To be a fun, physical and childlike experience.

The imperfections and limitations of paper are now the touchstones for Tearaway's world. Every object in the environment, from the traversable terrain to papercraft set dressings, are created piece by piece in a proprietary engine created by Media Molecule. Pieces of paper sink slightly as Iota runs across them, scraps of confetti fly into the air when Iota jumps into a puddle — which, fortunately, is also made of paper, preventing Iota from becoming to saturated to move.

"By having that limitation, it really helped us come up with ideas, and see things a little differently," Crowle said. "It really meant that we had a great focus. It meant we could design an engine to just properly create paper rather than simulate a whole bunch of thing and not doing anything fully."

"Most video games are filled with spike pits, and they're made of metal and rivets and meat."

That focus led to the kinds of clever, paper-oriented mechanics mentioned above. For instance, when Iota falls off a platform and into a bottomless pit, he's folded back into the letter which composes his head, and "mailed" back to the latest checkpoint. Streaks of glue running up walls or over steep cliffs allow Iota to adhere to the surface and perform gravity-defying platforming maneuvers.

During the demo, Crowle also showed off one of the user-generated content features for which Media Molecule is so well regarded. Everything on Iota is customizable; his eyes, nose, mouth and other facial features can be moved, resized, removed or replaced with a new design. If they're so inclined, players can even cut new shapes out of sheets of construction paper, layer them on top of each other, and stick them wherever they want. Iota's kneepad, Crowle revealed, was actually once an eyeball that he errantly placed on the wrong appendage.

And yes, you can stick your finger through the back of the screen, which is far more disorienting and wonderful in real life than it is in a trailer. The rear camera captures what's going on behind the console, projecting it on the holes created by your digital fingers — which Crowle explained would be customizable based on gender, skin tone, and so on — further enriching the illusion.

It's not all gimmicky; during the demo, plenty of conventional 3D platforming mechanics were on offer. There is a lot of game there, but what seems to characterize that game is a level of playfulness not seen in many other titles. It frequently — and often quite literally — breaks the fourth wall, inviting the player to enter its tactile folds in a direct way.

The trick, Crowle revealed, was to make the world inviting in the first place.

"If we were going to make this very tactile world, it was kind of obvious that we needed a world that you wanted to have those kinds of interactions with," Crowle said. "Most video games are filled with spike pits, and they're made of metal and rivets and meat. You wouldn't want to push your fingers in, and get really tactile in a world like that."