Marvel Heroes: managing 100 Wolverines and Spider-Men in an MMO

David Brevik talks about the challenges of making a Marvel MMO

Share All sharing options for: Marvel Heroes: managing 100 Wolverines and Spider-Men in an MMO

Gazillion Entertainment has a big job on its hands. It's making a massively-multiplayer online game set in the Marvel universe to the style of the Diablo series. It's adopting a free-to-play model that many are skeptical of. At some point after the game launches, there might be hundreds or even thousands of the same characters running around o- screen. And it's Gazillion's job to ensure it all makes sense to players.

"It was daunting. Definitely," says Gazillion president, David Brevik, who is best known for being the founder of Blizzard North, the studio behind the highly celebrated action role-playing games, Diablo and Diablo 2. "But this is something I love — I love the Marvel universe — so as much as it was daunting, I was up for the challenge. I knew what I wanted to do with it. I could picture the game in my head."

Speaking to Polygon at Gazillion's headquarters near Redwood City, Brevik revealed some of the challenges the studio faced while making the game he pictured in his head. The first was finding a balance between accurately representing the Marvel universe while not allowing the universe lore to compromise the game itself. One example of this is the game's looting system: superheroes typically do not loot. Superheroes don't need to find or use new "items." In the context of Marvel's superheroes, items don't make sense. But in the context of an action role-playing MMO, they make perfect sense.

In the context of Marvel's superheroes, items don't make sense.

Brevik says that looting and the picking up of items works well in fantasy settings like the world of Diablo, but when it comes to superheroes, the development team spent almost two years designing a coherent item system that was not only fun, but also made sense to the Marvel universe.

"So for example, Spider-Man can pick up web-slings, or Storm can pick up a new cape, and these items will give them ability enhancements," Brevik says. "Now, it doesn't make full sense, but none of this makes full sense. Why did this character just drop a pile of gold? Does he have pockets? None of it ever makes full sense, but it's fun, so that really is what makes it a game in a lot of ways, so we have to keep that."

Another element Gazillion had to try to make sense was the idea of there being multiple versions of the same character co-existing in the same space. In the Marvel universe, aside from the few occasions where the comics explored parallel universes, there has typically been one of each character existing in the world – one Wolverine, one Cyclops, one Spider-Man and one Storm. In Marvel Heroes, the characters act as classes, each with different abilities, strengths and weaknesses, so it won't be unusual for numerous players to choose the same character. This means that if 100 players log onto the server and decide they all want to play as Wolverine, there will be 100 Wolverines running around in the game. 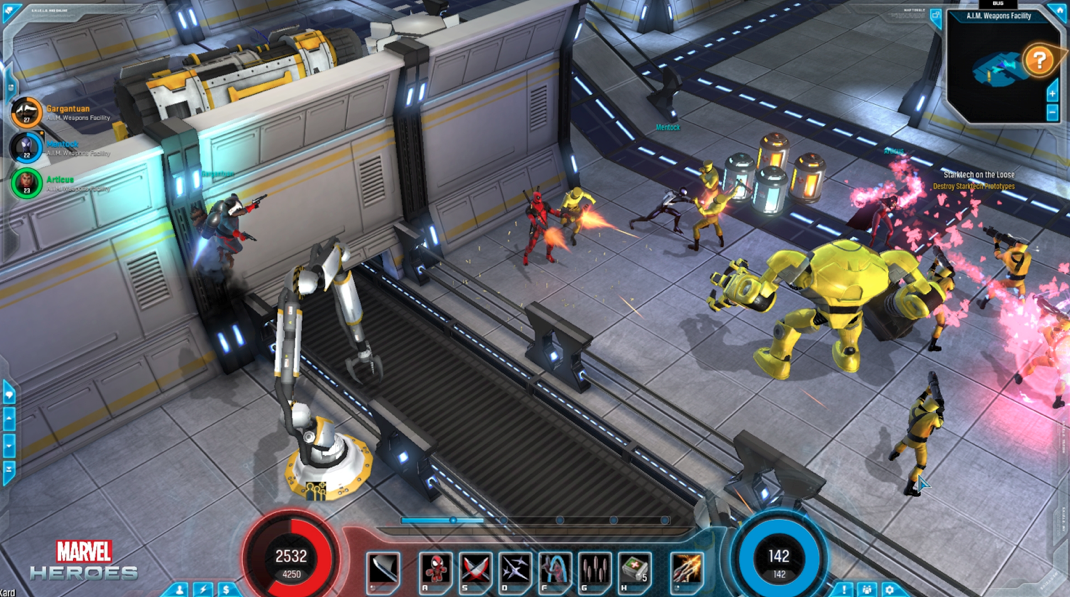 According to Brevik, this isn't as jarring to the gaming experience as it might sound. Players will be able to customize the way their characters look in order to set themselves apart, and the game has a detailed costume system in place. Every character can also be levelled-up in different ways, and it is up to players to determine which skill-tree their characters will climb. In this sense, no two Wolverines will be the same.

Brevik says that having multiples of the same characters can lead to interesting ways of playing the MMO, such as the formation of guilds consisting of only Wolverines, or battles between a faction that consists only of Spider-Men. For the development team, it was more important for them to allow players to play as the characters they know and love. Brevik believes that when players take ownership of their Hulk or their Captain America, it won't feel like they're playing the same character as anyone else.

Marvel Heroes will be a free-to-play game with microtransactions, which has met with skepticism from members of the gaming community who don't trust that the game will be completely free-to-play. Brevik says he understands where the skepticism comes from because free-to-play means a lot of different things to different people. Some associate it with the monetization systems of Facebook games. Some believe free-to-play equals pay-to-win. Brevik says that Marvel Heroes' take on the free-to-play business model will hopefully be more akin to League of Legends.

"The closest similarity in terms of quality in what we're trying to achieve here is like on the level of League of Legends," he tells Polygon. "League of Legends is a free-to-play game, yes you can spend money, but you don't have to, and a lot of people don't. You can have a great time and for the most part it's completely free and it's a very high quality product. We'd like to move in the same direction."

"The closest similarity in terms of quality in what we're trying to achieve here is like on the level of League of Legends."

Brevik says that he first considered adopting a free-to-play model for his games after seeing the success of the model in Asia, and later seeing that people in the West were willing to partake in microtransactions in the social game space. He saw the potential for his games to reach more people by removing the monetary barrier to entry, and while he knows there's a reluctance among certain members of the gaming community to embrace free-to-play, he believes it's here to stay.

"I think it makes the game have the possibility of being enjoyed by more people, and that's really what I want it to be," he says. "I want a lot of people to be entertained by this product, and here's an opportunity to do that."

Marvel Heroes is planned to be released in Spring 2013.