Big Fish's Match-Up! to put an end to the popularity of asynchronous tournaments

Share All sharing options for: Big Fish's Match-Up! to put an end to the popularity of asynchronous tournaments

When mobile and casual game developer Big Fish releases Match-Up! by Big Fish today for iOS devices, it will put an end to the popularity of asynchronous mobile tournament games, according to Big Fish's general manager, Chris Williams.

Speaking in an interview with Polygon, Williams says that the company's synchronous multiplayer tournament title, which it created in partnership with Jawfish Games, will be a literal game changer. He says that in an asynchronous game like Draw Something, players are often left waiting for their opponent to take their turn before they can resume playing, which can lead to players losing interest. In Match-Up!, Big Fish and Jawfish have created what Williams describes as tournament games — with a real-time twist.

Like in asynchronous multiplayer tournaments, players are still trying to better the score of their opponents. But rather than having their turn then waiting for their opponent to take their turn before seeing who has the better score, both players compete at the same time. And as both are competing concurrently, their games are completely in sync — both can see what's happening on the opponent's screen, results are shown immediately, and if a player advances to the next round in a bracketed tournament, all players in that tournament advance at the same time with no waiting involved.

"There's been a great run for asynchronous tournament games in the app store — it's been good," Williams tells Polygon. "We think that ends [today]."

FROM POKER TO MATCH-UP!

Phil Gordon is the founder of Jawfish, a company that specializes in developing technology for real-time, multiplayer tournament games. He was also a professional poker player for more than 10 years. He says that despite not having a traditional video gaming background, his experience as a poker player informed him of what was lacking in mobile app stores.

"I'm an extraordinarily competitive person, and the turn-by-turn games like Words With Friends and Scramble With Friends bored me to tears," Gordon says. "I thought the waiting was mind-numbing. So I thought, based on my competitive nature, I knew that competitive tournaments would be more fun.

"Even if we had 16 people in a room and we just lined everyone up and ran a rock, paper, scissors tournament, when you get down to that final four, you feel it. It's like your stomach tightens, you have that sense of competition that drives you to excel. That's not something that any of the games that I played in the App Store offered."

Bored by what he was seeing in mobile markets, but convinced that he had a solution, Gordon gathered a team of engineers to build the kind of technology that could support large-scale, synchronous, multiplayer tournaments. He knew this sort of experience could be successful. It worked in poker — he'd seen how competitive people could get if the conditions were right — and he knew that just because no one else seemed to be doing it didn't mean he shouldn't try. 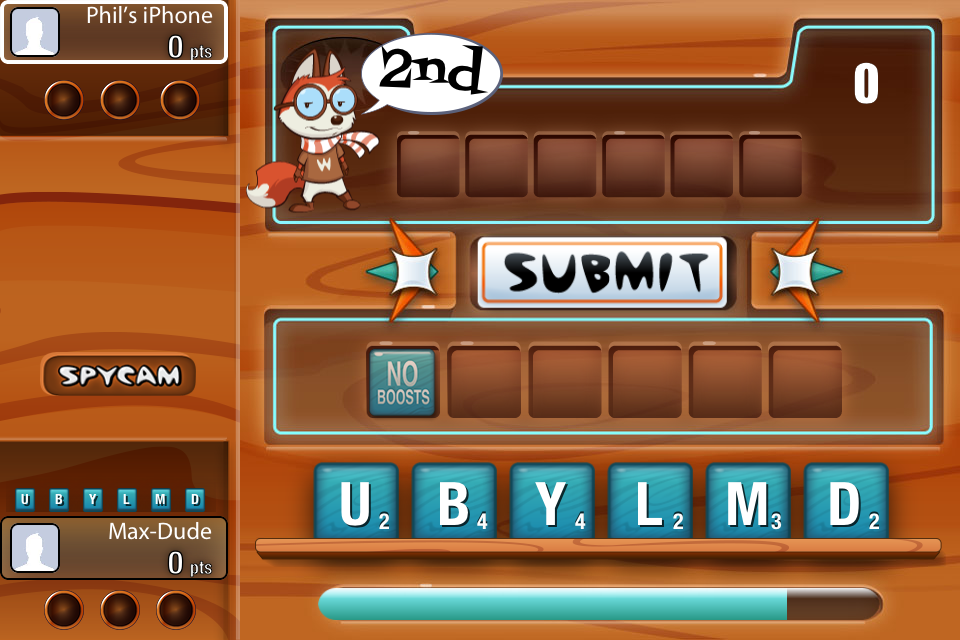 "There are more than 135,000 apps in the iTunes App Store. Not a single one of them have multiplayer real-time tournaments," he says. "And there's a reason for it. Real-time multiplayer is a very difficult and complex engineering challenge to do at scale."

While real-time multiplayer games have long existed on the mobile market, Gordon specifically refers to the challenge of real-time tournaments where multiple players can compete at the same time but still remain in sync, with one player's moves being shown on their opponent's screen in less than three tenths a second, no matter where in the world both players are. The game would also have to support potentially hundreds of thousands of players competing at the same time across thousands of bracketed tournaments.

"There are more than 135,000 apps in the iTunes App Store. Not a single one of them have multiplayer real-time tournaments."

Jawfish undertook that challenge, and Gordon believes the studio as "cracked the nut." It then partnered with Big Fish, with Gordon's team of engineers focusing on the tech, while Big Fish, which has remained dominant in the casual game market since its launch, developed the games themselves.

Match-Up! is launching with three games packaged into one. On the surface, they are familiar styles of games that most players have experience. There's Word Rack, a game that combines Boggle-like play with Scrabble. The players who creates the highest-value word in 30 seconds wins the round. There's QBeez, a match-3 puzzle game that allows players to move the blocks around the board by flipping their iDevice. And there's Mahjong (the tile-matching version). Familiar as these kinds of games may be, when Big Fish and Jawfish's synchronous tournament mode is applied to the three games, they become very different experiences to what most players are used to. 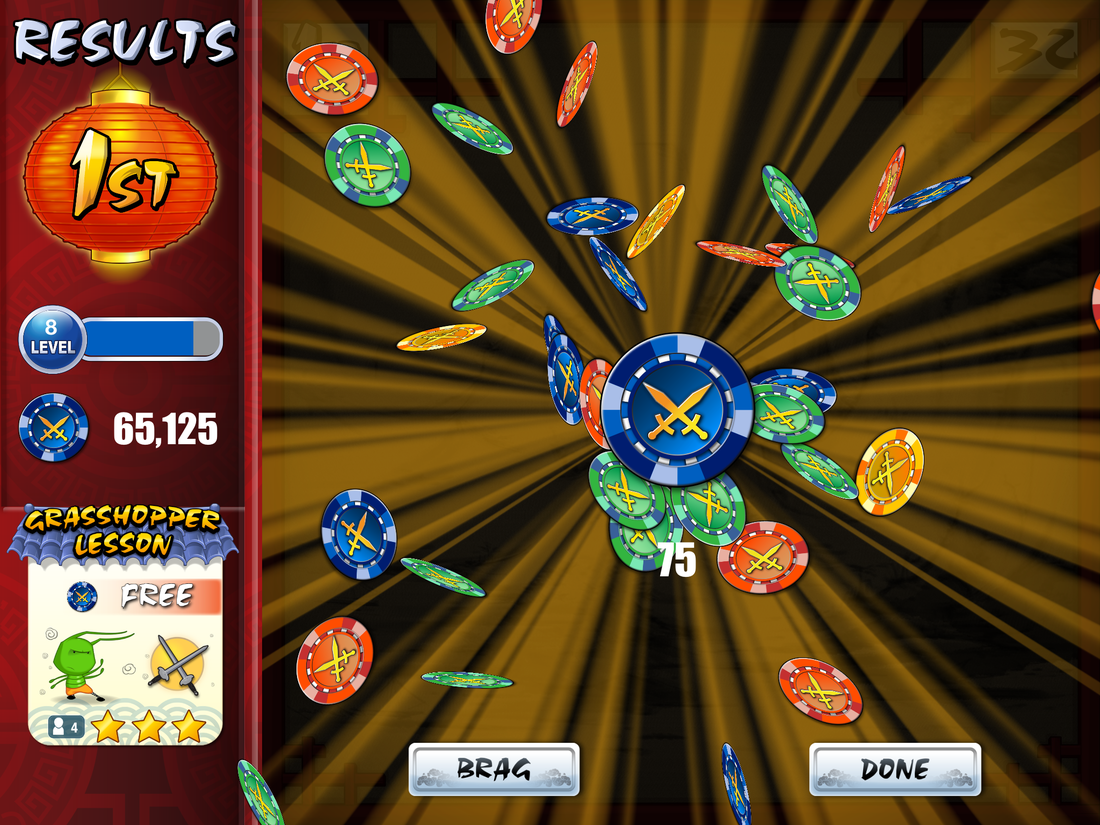 Every match is extremely fast-paced, and the knowledge that a player is competing against someone else in real-time plays on the psychology behind tournament mechanics, Williams says. The game picks random players from around the world and matches them up (hence the name Match-Up!) with others, so there is always someone to compete against. Players can also choose to compete only with friends.

"Competitive casual can almost be seen as an oxymoron in some sense, but we think our casual audience is actually very competitive," Williams says. "And one thing we were cautionary about was we didn't want the tournaments to be long-winded and require a long time investment."

"Competitive casual can almost be seen as an oxymoron in some sense."

According to Williams, a bracketed tournament takes no more than four minutes and individual rounds can go from start to finish in 30 seconds. Players can play all three games within Match-Up! for free and are given 1,000 in-game chips to buy into tournaments. The higher the stakes they buy into, the higher the rewards. Players who wish to pay can buy additional chips to enter more tournaments, and money can also be spent on one-off boosts that Williams says don't give players an unfair advantage.

When the game launches today, Williams believes that the term "Match-Up" will become synonymous with the kinds of games Big Fish and Jawfish are making.

"We think that the notion of instantly connecting, instantly playing and playing a match competitively is really going to resonate with people."

Match-Up! by Big Fish is available now for free from the iTunes App Store for iPhone, iPod Touch and iPad.

Seasons are evolving in Diablo 4 into something bigger