Zineth's cel-shaded, futuristic world, paired with its rail grinding and high-speed skating action, has drawn inevitable comparisons to Sega's Jet Set Radio. But, its creators say, it was not a major source of inspiration, in part due to how little the developers actually played Sega's groundbreaking game.

"I don't believe any of us owned a Dreamcast," said Russell Honor, one of Zineth's creators, said in an email interview. "Sometimes when making decisions about how the game controlled or looked we would actually try to deviate from what [Jet Set Radio] did, but that was hard since most of us never played it.

"But from the little I knew about it from seeing it in gaming magazines 12 years ago, it's had a lasting effect on my idea of what is rad."

Jacob Knipfing, another Zineth co-creator, points to the Dreamcast era as influential, acknowledging the influence of games like Jet Set Radio and Rez.

"I really like that era of gaming, and I think a lot of the team felt the same way," Knipfing said. "Sega was trying some crazy things and really going all out. To me, both of those games have very distinct feels to them, which I think is something we tried to create in Zineth."

"We always imagined Zineth being played on a half-broken tube television resting on some trash cans, behind a dumpster, so we designed for this dream situation," Honor said. "The first thing to come together was the sand shader, and since it really exposed the terrain's level of detail popping we embraced that this game was going to look like garbage to people who don't appreciate outsider art."

Honor and Knipfing, along with Tom Astle, Sylvia Forrest, Tom Lanciani, Evan Gonzalez and Dan Spaulding — under the name The Arcane Kids, a "revolving door with some key members" — released Zineth last year. The Unity-powered game was released first as a student project in experimental game design at Rensselaer Polytechnic Institute. Since its public release in August 2012, team members have continued to update and add to the game.

Zineth is ambitious. It's more than just a game about high-speed skating and wall grinding with flair. Players embark on missions and challenges provided by NPCs as they attempt to deliver a zine to earn cash. An ever-present cell phone, which can occupy a third of the screen, contains games within the game. The phone includes a stat-based arena shooter that can be played against computer-controlled opponents and Twitter integration — players can take pictures with their in-game cell phone and tweet the images. 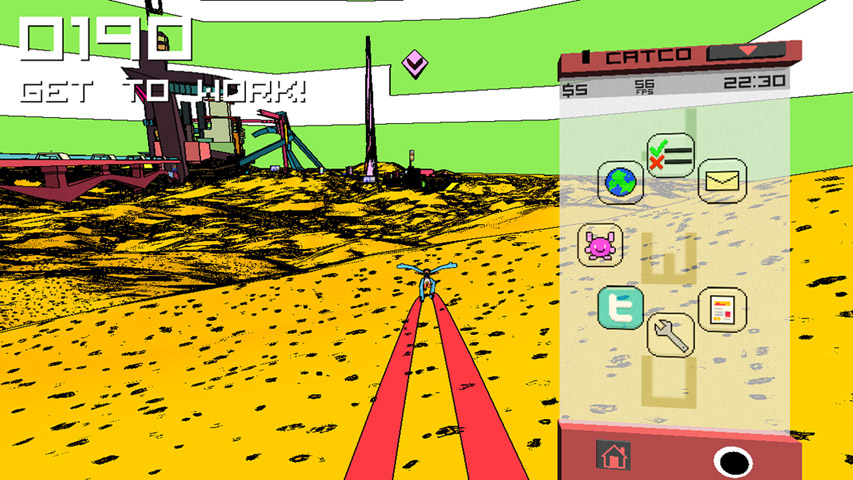 "I wanted the phone to feel like more than just a menu, like a very tiny world to visit inside the larger one," Knipfing explains on his website. "Part of the idea behind the game world was that everyone is constantly on their phones, so it seemed pretty necessary for there to be at least a few things on it to engage with."

"A lot of games use social media in really shallow ways, so the plan was to take Twitter integration way too far as a joke," he tells Polygon. "Eventually the joke turned into a working twitter client..."

Zineth's cell phone game borrows gameplay concepts from free-to-play Flash games and Pokémon, with player monster stats that can be upgraded with in-game money gathered from battles and hidden capsules.

The game's cell phone is a distraction from Zineth's desert-like world, where weird pockets of architecture present exploratory skating challenges and tucked-away secret passages. To fall prey to the game's virtual cell phone, despite its clever appeal, makes the player feel as if they're missing out on Zineth's larger world.

An estimated 140,000 players have so far found themselves lost in Zineth's world, its creators say. The game garnered a good deal of attention thanks to its frantic, eye-catching launch trailer.

"I think the video hit a sweet spot on the eye bleed scale, and the music was just offensive enough," Honor and Knipfing said. "Bold statement but, Zineth, in my opinion, at least looks like it might be fun to play, so by trying to keep the trailer short and intense enough, I guess we held the viewers whimsy for the minute it took to get the game unzipped onto their desktop."

As for the Kids, some have since transitioned to work on new video game projects at established studios.

"Currently most of us took jobs to begin paying back our crippling student loans," Honor said. "Russell works at thatgamecompany, and is in development with another longtime Arcane Kids member, not featured in Zineth, on what should modestly be noted as the most important video game ever made. Jacob Knipfing is doing a three-month game jam in a hut on Hawaii. Tom Astle is on the Sims team in what will be part of a very elaborate 10-year-long performance art piece, about dying dreams."