Never use the Boltok pistol? Well, you will now. Against a Reaver.

Review and information for Gears of War: Judgment

Gears of War: Judgment represents a set of challenges for Epic Studios.

But since its original announcement, Gears of War: Judgment has also seemed like a game in search of a reason to exist. Gears of War 3 put a fairly firm end to the human-Locust conflict that's driven the series, and also felt very much like the fullest possible realization of the series' potential. Other than the awkwardly extended console generation, another Gears game seemed ... well, let's say opportunistic. But People Can Fly found a hook for Gears of War: Judgment — challenge.

Gears of War: Judgment manages to stand on its own in the Gears catalog by capitalizing on an arcade sensibility to encourage players to push themselves. It fails to reach the heights of Gears of War 3, but it's pretty, funny, and just good enough to make you want a little more Gears.

If you haven't played every Gears of War game — and possibly read some of the comics, books and other supplementary fiction — you may start Gears of War: Judgment kind of lost. The game is set years before the start of the original Gears. Amidst victory celebrations commemorating the triumph of the Coalition of Ordered Governments (COG) over the secessionist Union of Independent Republics centered in Gorasnaya — stay with me! — the Locust have emerged from underneath the planet Sera's surface to conquer and destroy the humans above.

Judgment starts as series regulars Cole and Baird are marched in manacles to an ad-hoc military tribunal for disobeying orders. Gears of War: Judgment's main campaign unfolds as Lieutenant Baird and the rest of Kilo squad give testimony explaining exactly how their original assignment turned upside down.

The trial works well as a framing device. Gears of War: Judgment provides multiple main player characters for the first time in the series, and each character's point of view and sometimes conflicting motivations for going off-mission are explored enough to flesh them out. People Can Fly do a workmanlike job in building a story that keeps the game moving, doesn't get in the way, and provides for great setpieces that belong, rather than plopping down random bits of bombast. 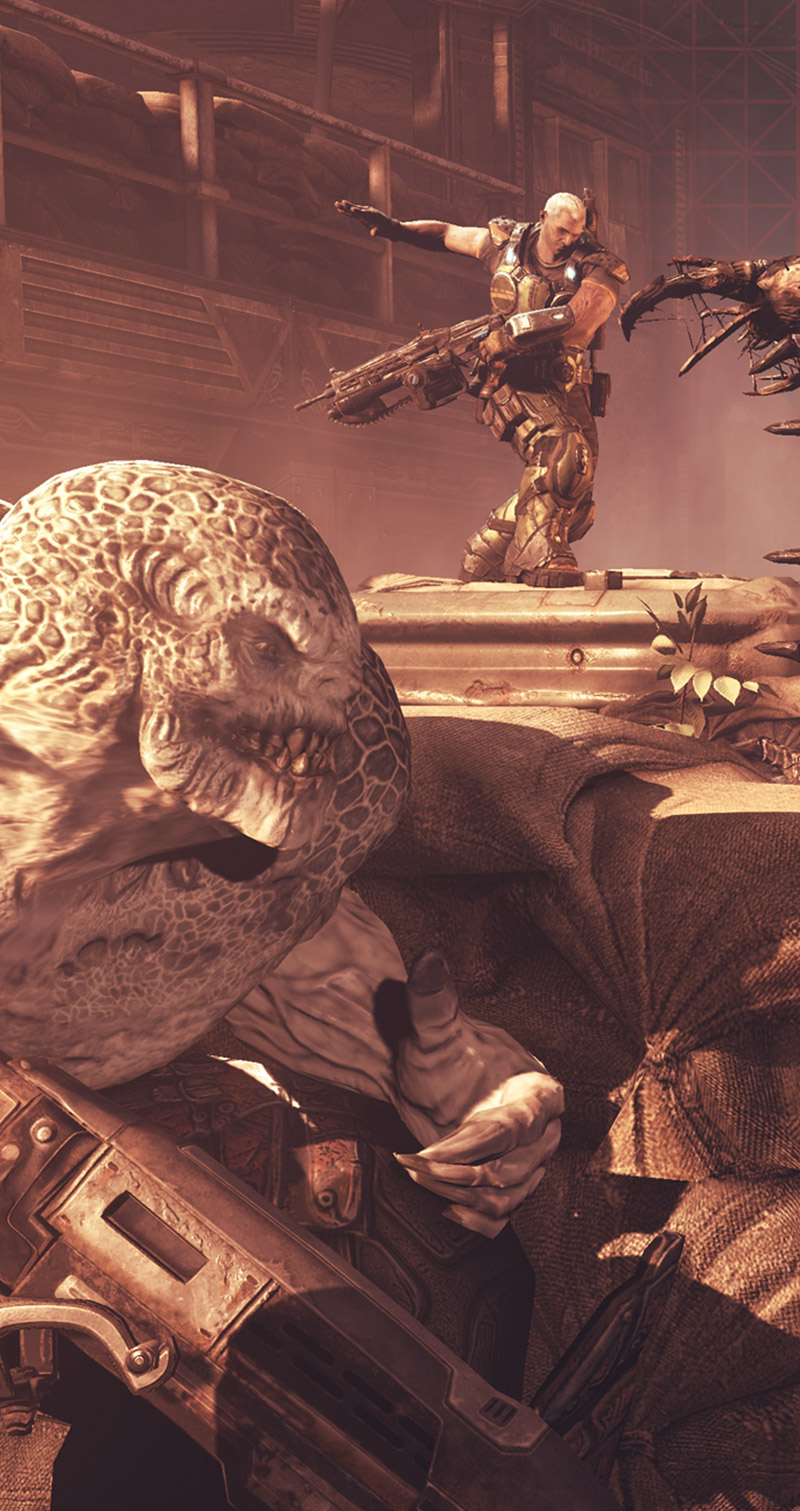 Those setpieces are oriented around the great, cover-based shooting that's driven all of the Gears of War games so far. You take cover against various surfaces, moving from one position to another with the A button, and aim around corners and the like with the left trigger. In this respect, Gears of War: Judgment is immediately familiar. But it's the additional wings built on top of Gears' now well-established foundation that make things interesting — like the dynamic spawning system. Rather than the static, scripted enemy spawning and positioning of previous Gears games, Gears of War: Judgment adapts to player strategy and play style by mixing up enemy types and tactics based on how you're playing the game. 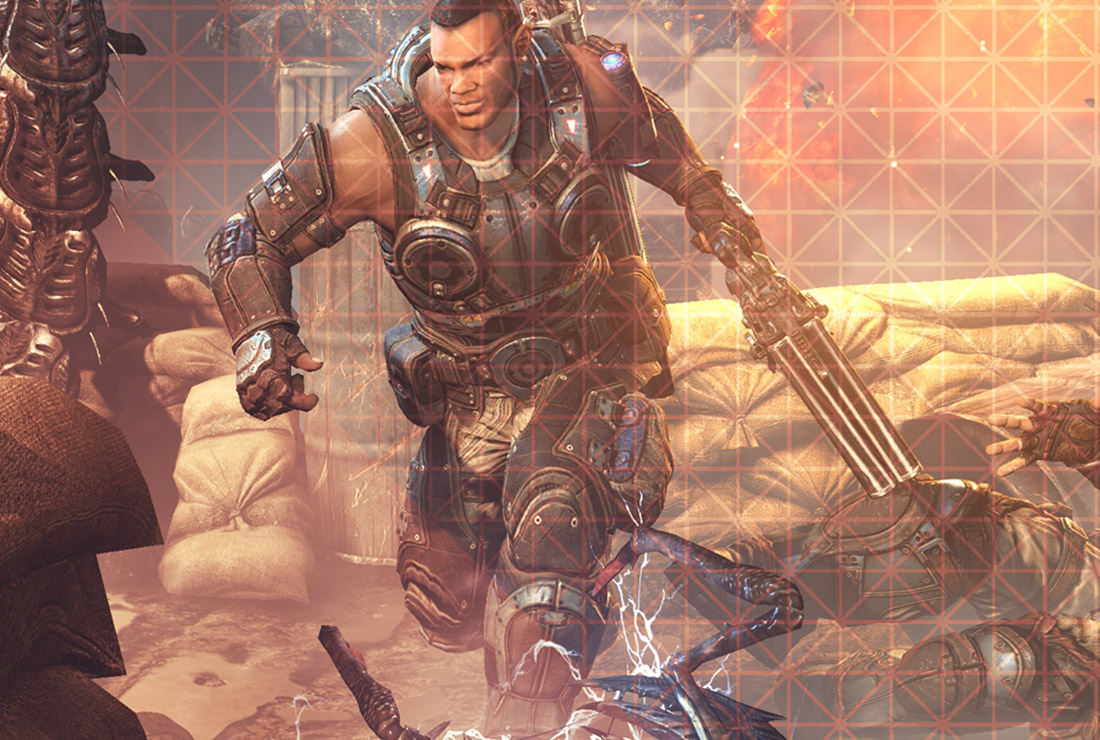 When I rushed in, I encountered shield-wielding power enemies, along with heavy-weapon specialists. When I tried a methodical ranged strategy, I had to dodge mortar strikes and fast skirmishers like wretches in between. Judgment changes what you're fighting, and where they're coming from, employing multiple possible points of entry.

Gears of War has always been a tactically minded shooter, for all the bravado and bullshit, and the additional thought required by the new enemy tactics make it even more so. Yes, it's still viscerally violent (chunks of flesh fly from well-aimed shotgun blasts, brutal executions and chainsaw kills remain). There's still a sort of gung-ho quality to the mid-battle bits of dialogue with your NPC (or co-operative) teammates, though the machismo has been traded somewhat in exchange for drier sarcasm and jokes. But that's a bit of seasoning on a fundamentally well-developed combat system.

Never use the Boltok pistol? Well, you will now. Against a Reaver.

Enemies are smart enough to punish you for mistakes, but there's a predictable sense of cause and effect to everything. If you rush a shotgun-wielding locust and miss your shot, you'll probably get downed. If you shoot the new rager enemy, rather than taking him out with a chainsaw attack or bayonet charge, he'll go Incredible Hulk on your ass and make things much more complicated. Gears of War: Judgment feels better at encouraging you to use all of your tools, rather than feigning indifference to players who just shoot at everything. It can be more difficult as a result, but the successes achieved amidst more aggressive, powerful enemies feel good. And the new Declassification system further adds to this. 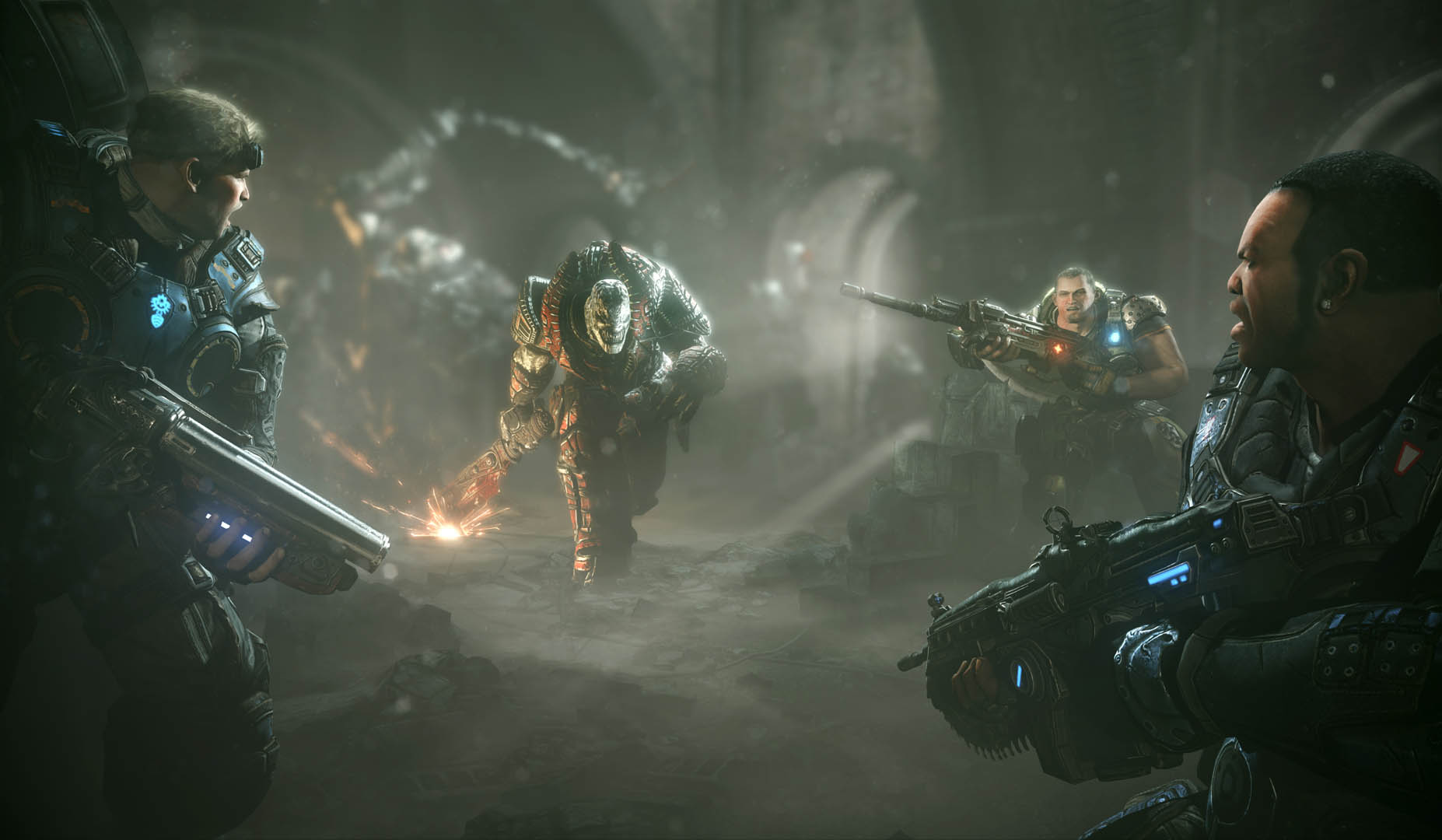 Each new encounter area in Gears of War: Judgment features a "Declassified" option. The premise: parts of Baird and co's testimony have been redacted or omitted in the official record of events for reasons of ... security, I guess? It's never really explained why that kind of knowledge is dangerous, other than to say "things were way worse than they're telling you." 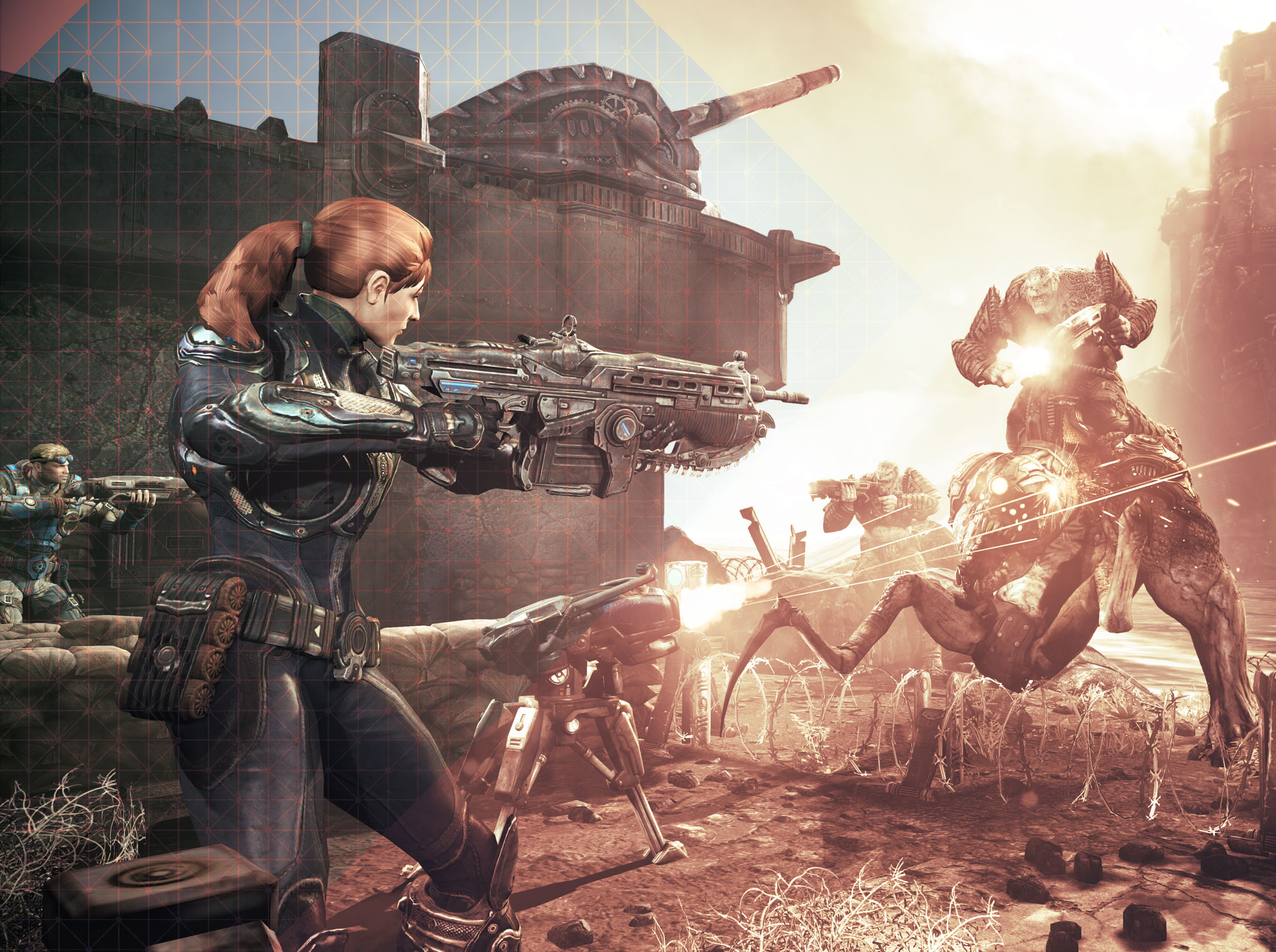 Declassifying a mission, done by hitting "X" on glowing Crimson Omen icons in each new section of a level, makes Judgment harder in various, often maliciously deviant ways. Maybe enemies are tougher. Or maybe you've got three minutes to make it through a section before, say, a wayward Hammer of Dawn orbital strike vaporizes your entire team, or poison gas kills everything in the area. One of the more memorable instances includes a wine-cellar which, when declassified, fills with dust that makes anything more than short-range visibility impossible, then fills the space with aggressive Theron Guard wielding cleavers and other, more powerful enemies.

The declassified mechanic is easily the best part of the game. They all make Gears of War: Judgment much more difficult, but it's only as cheap as you're letting it be in this case, which makes the whole thing oddly more compelling. Declassified forced me out of my comfort zone and made me experiment with all the tools at my disposal. Never use the Boltok pistol? Well, you will now. Against a Reaver. And you'll do it while competing with and against your friends.

Gears of War: Judgment has brought back the arcade scoring system from Gears of War 3 and situated it in the campaign proper, transforming it into the stars system. As you play, your performance will slowly unlock up to three stars in each section of the game. Getting downed but not killed will slowly decrease your rating, while activating the declassified option causes your stars to rank up more quickly, all while your various stats are tracked against the nearest person on your Xbox Live friends list to have played the game. It's fantastically motivating. And then, as Gears of War: Judgment peaks, it's over.

While there's an additional campaign tidbit in Aftermath — set as a side story during the events of Gears of War 3 — Gears of War: Judgment is the shortest of the series by a few hours, at least solo and on my first playthrough. . Judgment doesn't overstay its welcome, thankfully, and it rarely gets mucked up in extraneous fluff. In fact, it lasts just long enough to mostly forget that for all the great additions it makes to the series, Gears of War: Judgment is, in many ways, just more Gears. It's a great piece of Gears content, but it doesn't move the series forward much at all.

This applies even more to the multiplayer backbone of the series. People Can Fly experiment with combining parts of existing Gears of War multiplayer modes with Overrun. Overrun takes the basic mechanics of Gears of War 3's Beast mode — where you earn points to use ever more powerful Locust creatures to destroy a human position — with a new, class-based Horde-like mechanic, where human players choose from soldier, medic, engineer, and scout classes. Overrun works well enough, but it doesn't have the depth or, I suspect, the legs of Horde — which is now gone. In its place is Survival, which is Overrun with bots in place of Locust players. It's not a poor substitute, but it's not a replacement for Gears of War 3 either.

Competitive multiplayer gets a point-capture mode and a few new maps, but it just feels like more. And that's Gears of War: Judgment.

Judgment doesn't re-invent the series, but it does add enough to serve as a great supplement

As a side-experiment with class-based multiplayer and more aggressively arcade-influenced shooting, Gears of War: Judgment doesn't feel essential in the same way its predecessors did. If three games in five years left you with your fill of Gears of War, Judgment may not be enough to change your mind. But as a well-executed supplement to its parent series, Gears of War: Judgment is easy to recommend. People Can Fly have added enough cool new bits to make the game feel fresh, even if they're not re-inventing the series.

Gears of War: Judgment was reviewed using a retail boxed copy of the game for campaign, and at a multiplayer event held by Microsoft and Epic Studios using development servers. You can find additional information about Polygon's ethics policy here.

Our review of Gears of War: Judgment 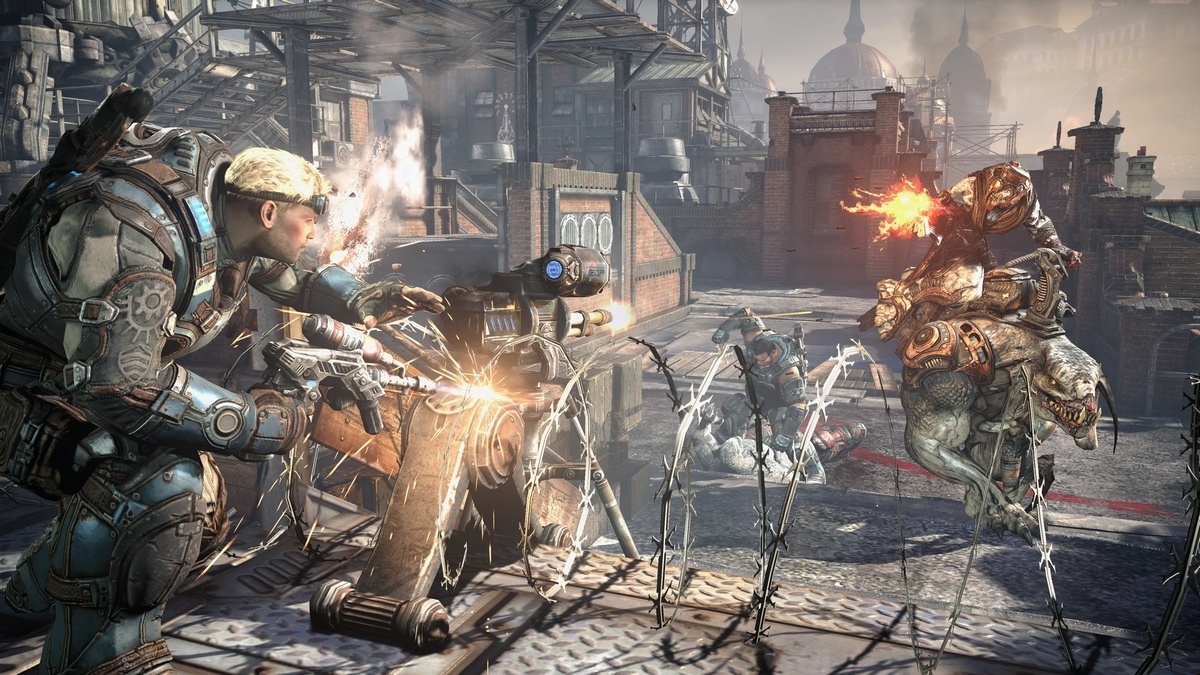