"One more thing before we wrap up that we're pretty happy to talk about," Elder Scrolls Online game director Matt Firor told a theater of journalists last week at Zenimax Online Studios' suburban Baltimore offices. It was 3 p.m. and we'd been at this since 10 in the morning. This was following an hour of presentation and gameplay demos, and more than three hours of hands-on time in the game's early Daggerfall Covenant starting areas, one of three starting areas in the game.

So after all of this, when I heard Firor announce "one more thing" – a phrase magically transformed by Apple's Steve Jobs into a declaration of innovation – I had an idea of what he was about to share. Because I had been waiting for it all day.

"Up until now, basically everything, every video that we've shown, all our beta sessions, were all done using third-person camera," Firor explained. "You could roll into first-person, but it wasn't kind of the traditional Elder Scrolls first-person experience that you all know and love. Because [...] one of our pillars that we talked about this morning is that you sit down and play the game, you want to make sure it feels like an Elder Scrolls game, so here's something we've been working on."

And then Firor showed a video that looked a lot like what I've come to recognize as an Elder Scrolls game, with the trademark first-person camera, your arms outstretched dual wielding weapons and magic. And it didn't look anything like what we'd seen, and what I'd played, all day.

So why is it that what we played – a third-person RPG that looked, even if it didn't always act, like a traditional MMO – didn't resemble this video and, by extension, what many have come to expect from something called "Elder Scrolls"? Firor says the developer "heard the feedback" following the game's 2012 reveal and "wanted to do it all along" but the delay was, and still is, a technical matter owing to things like "animation rigs" and the complexity of swapping weapons and skills from a first-person perspective.

"We haven't been able to show it until now, it's still in development," Firor said. "We won't be able to play it for a while, even in beta. But we have a build of it working." And that build was what they showed us a video of though, regrettably, the video wasn't released to accompany this story (I asked). Perhaps the best way to describe it to you will be to tell you about my response.

"Using the [existing first-person] camera didn't look like that," I explained after asking what they were doing to make the footage in their video look so much better and, to be clear, by better I mean more like Elder Scrolls. Earlier, during the hands-on portion of the day, I noted a first-person toggle on the game's controls sheet and quickly activated it, hopeful that it would alleviate some of the not-Elder-Scrolls that I had been feeling. While it worked, the hands were notably missing but more importantly, the scale looked off. 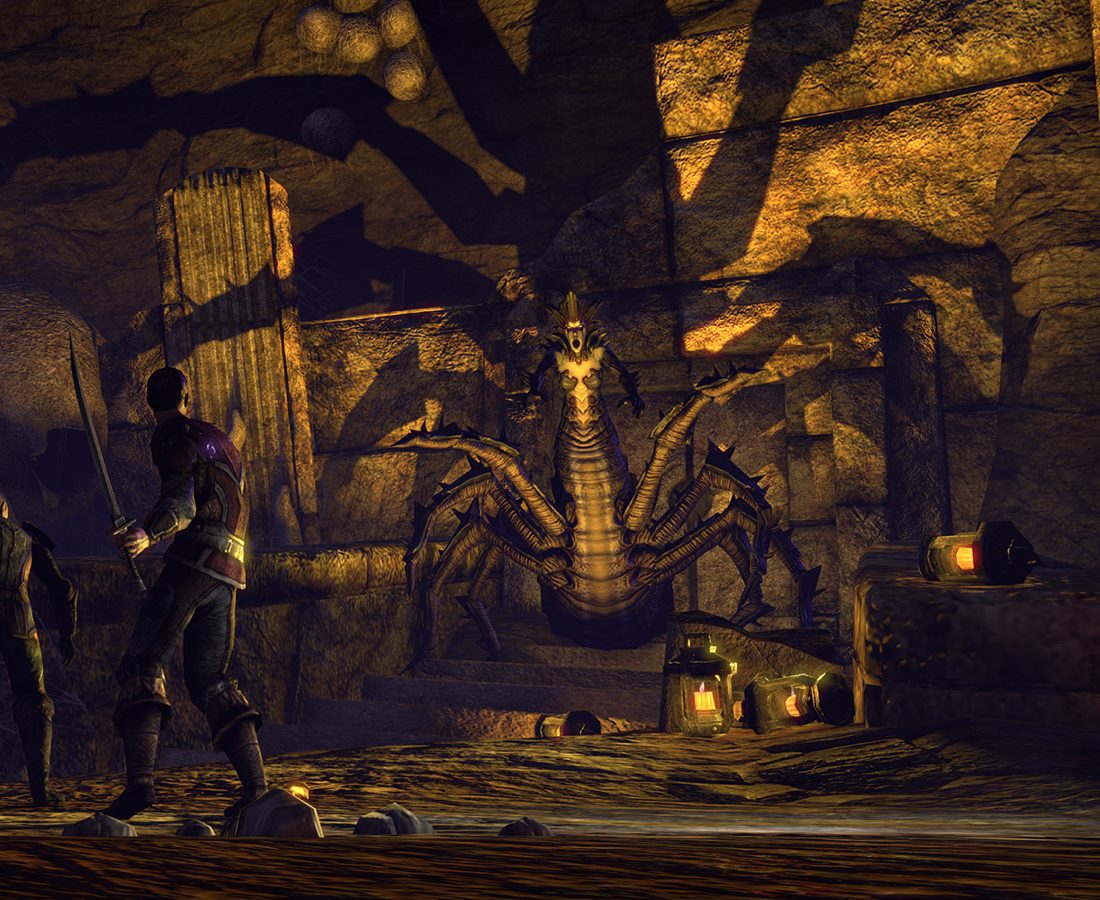 The elegance of Elder Scrolls' combat system -- as seen in Skyrim and Oblivion, notably -- has never been mechanical but rather structural, owing to the integration of multiple systems, granting the player a great amount of agency over how they choose to play the game. Elder Scrolls Online does a fine job of matching the mouse-based combat of the game's PC predecessors with left click serving as an attack, right click as block with up to five abilities paired to number keys (that can be expanded).

"If you played the PC version of Skyrim or Oblivion, our combat system will feel very much at home," Firor said, before introducing us to the game. "These are basic combat system decisions that came right out of other Elder Scrolls games."

But it's not all familiar; the game introduces a stun system which, while simple, adds just enough challenge to reward well-timed attacks. And it reinforces a philosophy of the combat system: "You're not going to be looking at the UI," the way many other MMOs require you to.

But with a first-person option expected, will the game support game controllers out of the box? The answer is yes … sort of.

"You can actually buy button-mapping software right now and plug in a controller, and the combat system works," Firor said. "It's just not official."

"There's about 10 percent of the company that does that," creative director Paul Sage chimed in.

"The problem is you need to put [the controller] down to access the rest of the interface," Firor said.

So I asked if they were playing with the first-person field of view, to better approximate the camera in older Elder Scrolls games. "There is a field of view setting that we're playing with," Firor told me before asking someone in the back of the theater who ostensibly had more knowledge of the matter.

"We did change the FOV for first-person," he said.

"Relative to what we saw [earlier] today?" Firor asked.

Maybe that's it. Earlier, Firor explained that while in general, places in the game look like the places you recognize from earlier Elder Scrolls games, there are differences owing as much to mechanical necessity as to the game's 1000-years-before setting.

"The streets are different and the buildings are a little different," Firor said. "We do have to account for third-person camera, because we know people are going to be using it a lot. So our structures tend to be a little taller to allow a lot more mouse movement and things like that." He later noted that the roads are wider to accommodate more people. All of this is to say that while "when you're in Windhelm you feel like you're in Windhelm," but don't expect a perfect replica of Skyrim's recognizable city.

With a 2013 ship date, across both Windows and Mac OS operating systems, having a fundamental feature like an entire camera perspective unplayable after over five years in one stage or another of development is troubling.

Part of the explanation for this disconnect is that, unlike its single-player Elder Scrolls predecessors, Elder Scrolls Online will often require a third-person perspective.

"Since this is an MMO, you will be rolling in and out of first-person some, because especially in PvP you're going to want to see behind you a lot," Firor said. "But if you want that full-on PvE, first-person, you-see-your-hands just like in every other Elder Scrolls game, you can play that way."

That video was more promise than proof right now but if you, like me, were apprehensive that Elder Scrolls Online was more MMO than Elder Scrolls, abandoning the series' unique first-person role-playing formula in favor of something that looked, well ... like an MMO, then there's reason to be hopeful. 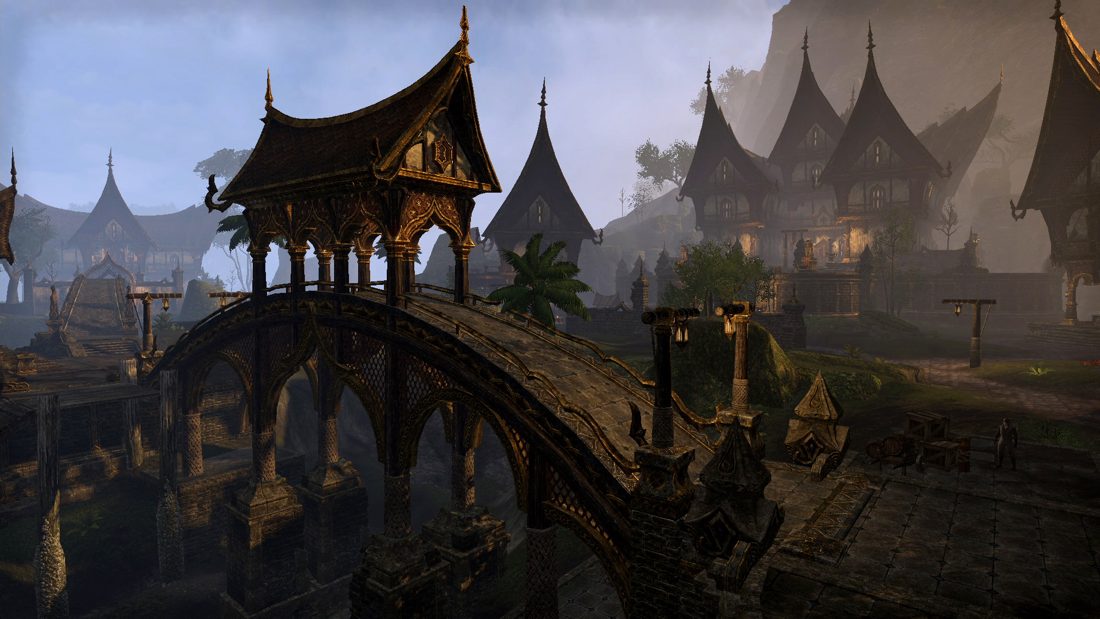 The four pillars of ESO

Game director Matt Firor said that the design of Elder Scrolls Online is predicated on four distinct pillars. "These are important to us, as gameplay developers, because whenever we come up with a new system, we make sure it fits one of these four pillars of the game."

Combat: "We want to make sure we have strategic, reactive mouse-driven combat." (See sidebar above).

Unique progression: "As you level, you can make unique decisions about your character. What abilities you want to learn, what weapons you use. As you use things, you get better with them."

Modern social experience: "With friends systems, megaservers, we put a lot of effort into making sure it's a modern socially connected game."