There's practically no risk and an uninspiring reward.

There's the surprise death, the heartless brutality and the familiar, pensive strains of Bear McCreary's theme. It's precisely in line with the opening of the hit TV show the game is based on and promises all the heart-wrenching drama and desperate action the series delivers.

It is The Walking Dead: Survival Instinct's last brush with competence.

Did I mention that these unscheduled stops are often the same maps, over and over?

In this crass, cynical piece of exploitation, players take on the role of Daryl Dixon, one half of the backwoods-dwelling Dixon brothers. A prequel, Survival Instinct follows Daryl as he tries to reunite with his elder sibling Merle and escape the zombie apocalypse sweeping through the South. As Daryl proceeds, there are predetermined stops that make up The Walking Dead: Survival Instinct's levels, such as they are.

As you drive between destinations, you burn gas. (Watching from a thrilling map, mind you; there's no actual driving.) If you run out, you stop in a small, zombie-infested locale and collect some more (along with assorted other supplies). To conserve gas, you can choose to stick to highways. On highways, though, there's a higher chance of your car breaking down and a smaller chance that you'll get to "scavenge" — which means stopping at a small, zombie-infested locale and looking for supplies. 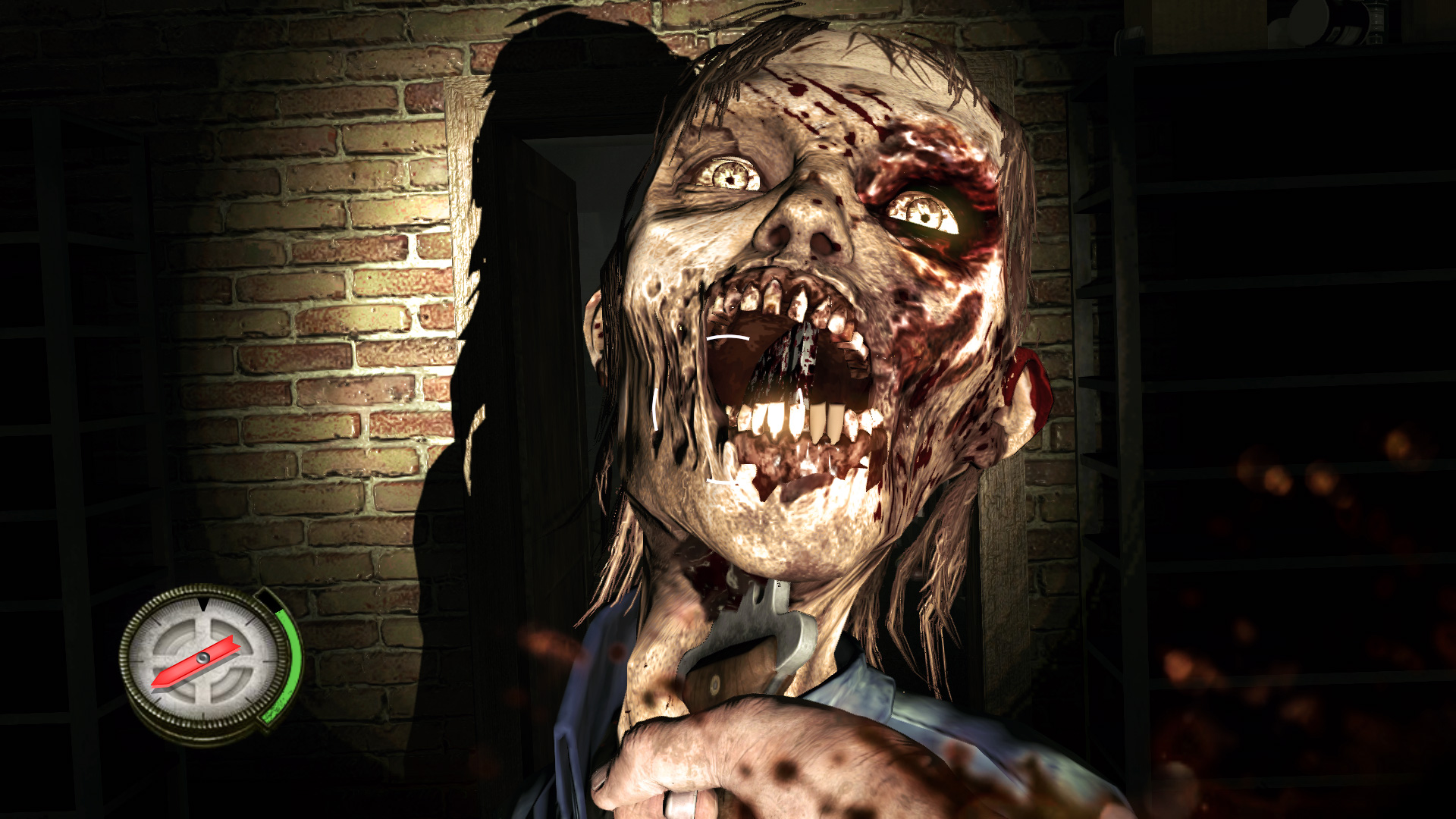 What happens if your car breaks down? Oh, you stop in an overrun area and search for a missing part … and some other supplies. So, full tank or just past E, highways or backroads, the practical upshot is that you stop on the way and have to kill zombies and maybe find a Gatorade. Did I mention that these unscheduled stops are often the same maps, over and over?

Occasionally you'll meet survivors during your brief missions who'll join your road trip. At the beginning of the following mission, you can send them to track down supplies, even arming them for the fight to improve the chances they'll return. The worst that can happen to them is that they die, but since Daryl's car has limited seating, if they don't die, you may have to leave new companions behind as you progress. Also, the items they return with are usually equivalent to a tenth of the spoils you'll find yourself. There's practically no risk and an uninspiring reward.

You can sometimes choose between two branching paths in your quest for Dixon reunification, so there will be a few new intensely bland levels you can explore should you choose to play the game again. If someone suffers from such intense self-loathing that they'd consider that, I'd submit their money would be better spent on therapy.

A first-person game, Survival Instinct arms you with a handful of rifles, pistols and shotguns. Since the only way to kill a zombie is with a headshot, in practice, the different firearms all blur together: You point one at a zombie's melon and fire. The post-zombie apocalypse conceit dictates that ammo be sparse. Luckily the landscape is littered with melee weapons that are vastly superior to the firearms.

I completed 90 percent of my five-and-a-half-hour journey through The Walking Dead: Survival Instinct using first my knife (which can kill a zombie in three head hits), then a lead pipe (two head blows) and finally a fire axe (one hit!). Since firearms have a smaller reticle, are ineffective at unpredictable ranges and typically draw a crowd of zombies, it rarely ever makes sense to rely on them. 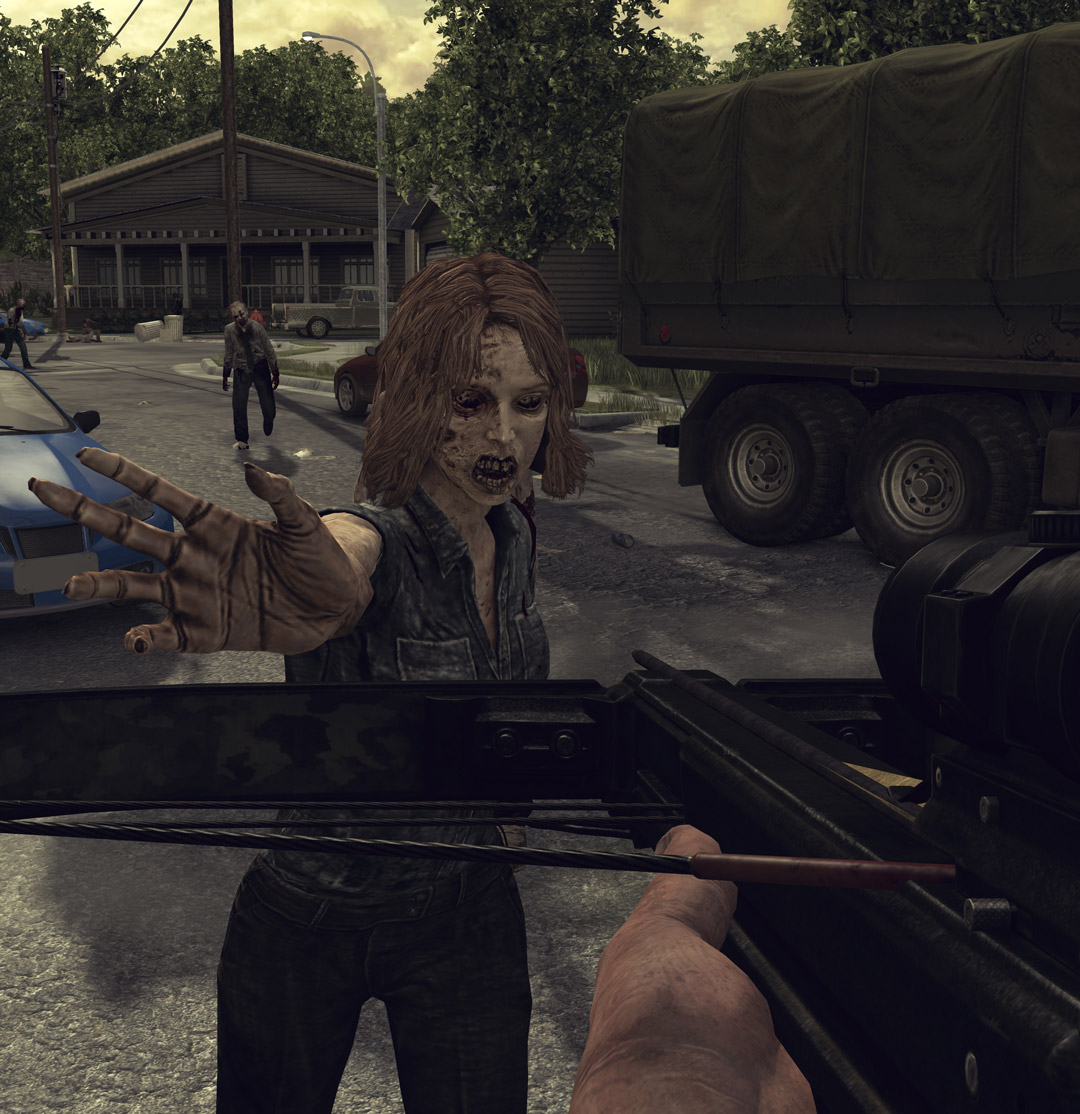 I say they typically draw a crowd because zombies in Survival Instinct are thoroughly unpredictable. Sometimes you'll be spotted from yards away by a biter that sprints straight at you. Sometimes a shotgun blast from 5 feet away isn't enough to distract one from its meal. You can lure zombies away from you with a thrown flare or glass bottle, but only if they haven't spotted you, and if you can tell an unalerted member of the undead from your more astute variety of walking corpse, you're a savvier player than myself.

If you manage to sneak up on said unaware zombie, you can perform a silent kill. As exciting as seeing one of the very few resulting canned animations may be, this also leaves you completely vulnerable to attack from other zombies while the animation plays. It may be authentic. It's also infuriating.

This unpredictability makes it easy to get bogged down in a crowd of zombies. This sounds less than ideal, but when a zombie is in close range of you, you'll enter into a grapple during which you can instantly kill the walker by placing your reticle on its head and pulling the right trigger. Getting swarmed by a herd means getting passed from zombie to zombie as they patiently wait to be eliminated. This is almost always the safest way to handle a herd of undead.

Let that sink in for a moment: In this game where the only threat is zombies, the safe option is to gather up a horde of them and let yourself be swallowed up in their ever-decomposing embrace.

This is Survival Instinct's recurring problem: It has mechanics, but they never congeal into systems. Firearms and melee weapons are both adequate when taken individually, but they're incompatible together. The grabbing mechanic is fine, but when paired with The Walking Dead: Survival Instinct's terrible AI, it leads to a dreary game of "Pass the Redneck."

Did I mention you can't shoot through chain link fences? And there are basically five zombie models, one of which looks like Justin Bieber? ZomBiebers. And that checkpoints are sadistically sparse and seemingly random? I could go on. I will not.

Playing Survival Instinct is like listening to a roomful of barely competent musicians, each of whom is playing a completely different song. And every once in a while one kicks you in the groin. Also, you have a sunburn.

The tide has begun to turn for licensed games thanks to great efforts like those from Telltale, Rocksteady's Batman franchise and others. The Walking Dead: Survival Instinct is the exact sort of lazy, cheap cash-grab that gave licensed games a bad name in the first place. To put a slightly less nostalgic twist on an old cliche: They don't make 'em like this anymore.

For all of our sakes, let's hope they never do again.