The Wii U "Director's Cut" of Deus Ex: Human Revolution isn't just a version of the game and its additional content recompiled for a console with a touch screen interface, it's also a title specifically designed to address key complaints gamers had about the original version.

"Fan feedback was our main concern," said Emile Pedneault, game designer for Deux Ex: Human Revolution Director's Cut. "We wanted to listen to our fans and react to that."

So the developers held focus groups and searched out some of the chief complaints about the PS3, PC and Xbox 360 versions of the game. Once they determined what some of the most common, significant negative reactions were to that game they set about coming up with fixes.

Some of those fixes include some significant changes to the way elements of the game work. The forced boss battles, for instance, seemed not to line up with the rest of the game's ability to choose how you would play through the game.

"There was a lot of frustration with boss fights," he said. "We had a lot of criticism that the boss battles didn't match the multipath flow of the rest of the game.

"Now we have a way for each boss to be defeated without a single bullet. You still have to work at it, but it gives the players options."

Other major work includes tweaking the game's AI, adding a new game feature, tinkering with the visual fidelity of the game and making the game's main storyline seven to eight hours longer.

The game was lengthened by incorporating both Deus Ex's DLC mission The Missing Link and the pre-order bonus mission. But those two pieces of content weren't simply slapped onto the disc, developers say. Instead the team incorporated them neatly into the game's existing narrative.

Pedneault said players unfamiliar with the original game likely won't even notice that they've shifted from what was the game's original on-disc story to its add-on content.

"It not just that you can choose Human Revolution or The Missing Link," he said. "It's part of the game as a chapter. It flows smoothly into the story line. It's integrated more into the storyline."

The content hits about two-thirds of the way into the game and forces players to respec Adam using all of the Praxis earned so far. That tweaking of the character's augmentations and abilities doesn't revert when the now integrated Missing Link content ends; players simply continue with the game with Adam as he is.

The visual differences between the current console versions of Deus Ex: Human Revolution and its Wii U version were mostly the result of work that the team did while developing The Missing Link, Pedneault said.

"After the release we continued to work with the game engine to improve some stuff because we knew we were doing DLC," he said. "In missing link, the visuals are better. We took all of that experience from Missing Link and added it to the entire game when working on the Wii U version."

That means this game has improved lighting systems, fog and smoke systems, smoother shadows and better antialiasing, he said.

"That makes for a sharper looking Deus Ex," he said.

The game also includes the ability to replay through the game after you have completed it without having to reset Adam. That way, Pedneault said, a player can eventually unlock all of the augmentations and make a "perfect" Adam. 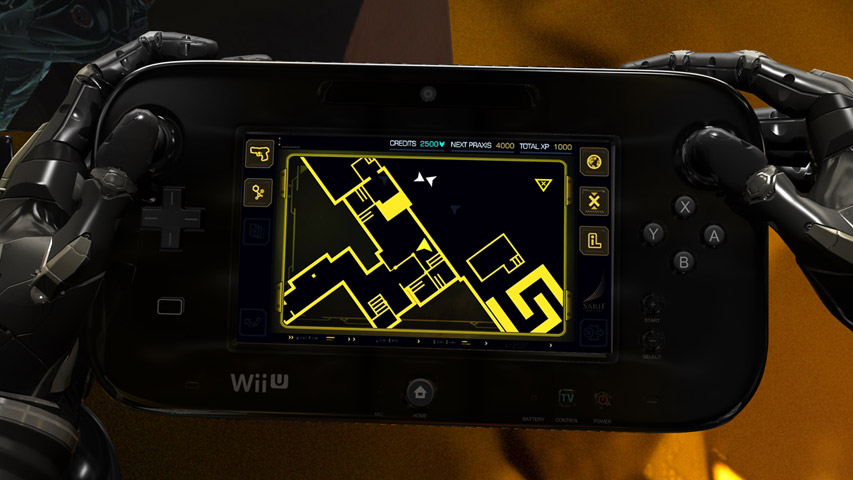 A fully-integrated strategy guide is also built into the game. Players can pause the game and drop into it to check out guides, walkthroughs and other tips at any time. The Wii U GamePad typically displays a map while playing, and players can pause and draw on the map to show where they may want to go, when they hop back into the game, those notes remain on the GamePad map.

The Wii U version will also support GamePad-only play, allowing people to play through the entire game without the need of a television, though some of the game's bells and whistles, like that bigger GamePad map, won't be present during play.

One of the neatest features that the Wii U offers, beyond touchscreen controls for tossing grenades, sniping and hacking, is the ability to quickly grab screen shots from inside the game, add text or voice messages and then upload these info logs to a friend's version of the game through Miiverse. Once applied, these info logs show up in the game as a floating icon beacon in the area where they were created. To check the log's info a player just has to walk over it and the image pops up in a window in the game world. Players who don't want to be bothered by their friends' info logs can turn the option off. Pedneault said a player can have a total of 50, including their own and their friends', in a game.

While Pedneault was adamant that this version of Deus Ex: Human Revolution would be the most comprehensive, and best version of the game, he wasn't able to say if any version of it will ever show up on the PS3, PC or Xbox 360. He said the studio was open to the idea, but declined to say how likely it was.

"We encourage all fans to give us feedback," he said, "and tell us what they want to see next for Deus Ex."