Share All sharing options for: Sacred Citadel maintains its RPG roots in a beat-em-up world

The Citadel series' hardcore RPG mechanics may not be fully realized in Sacred Citadel, the upcoming beat-em-up from SouthEnd Interactive, but there's a lot of options for players hoping to make the game's four classes their own.

RPG elements in beat-em-ups are nothing new — Castle Crashers and Ubisoft's Scott Pilgrim Vs. The World: The Game are two recent examples, featuring stats, character levels and unique special attacks. Based on a PAX East demo of several levels from the game's campaign, Sacred Citadel hopes to take those ideas (and even those from older genre staples; River City Ransom, for example) and fold them all together into a single game.

Castle Crashers is probably the best jumping-off point for describing Sacred Citadel, as a lot of its combat and progression systems are the same. Upon leveling up, players assign points to different, broad attributes, choosing how their character grows. New weapons and armor are dropped by enemies, which players may equip on the fly and add to their collection. In combat, heroes can chain basic and heavy attacks into combos, store energy and unleash special attacks, and deftly dodge their opponent's blows.

It was a lot of fun, but some of those mechanics mirror those of Castle Crashers to the point of derivation; though, that's arguably one of the best beat-em-ups to take inspiration from. Others lean a little heavier on RPG tropes, as each class can only equip certain types of weapons and armor, and each of their heavy attacks are used for different purposes — the melee-centric class wields a massive hammer they can use to knock back foes, while the agile Ranger can fire a quick series of suppressing arrow shots. 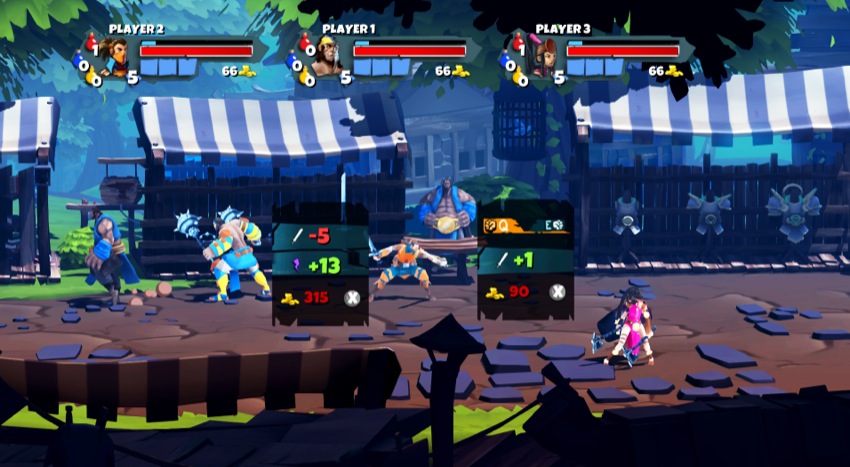 Alex Toplansky, creative producer for Deep Silver, said that the ability to fold those elements and other strong multiplayer lessons from modern games is a huge benefit for modern beat-em-up developers. The sensibilities of a local multiplayer downloadable game is much different than that of an arcade beat-em-up; namely, it doesn't have to eat as many quarters as it possibly can.

"I think one of the most important things in revisiting beat-em-ups is how to enhance the co-op experience," Toplansky said. "A lot of the time, these were arcade games that were all about stealing the last quarter. Now we're in an era where we have to figure out how to build everything we've learned about multiplayer from other genres, and incorporate that, and make it a more meaningful co-op experience. That was definitely what we were trying to do with Sacred Citadel, and I think a lot of the other guys in that space are trying it as well."

Deep Silver, which is handling publishing duties for the downloadable title, isn't worried about the message for Sacred Citadel and the upcoming Sacred 3 — for which this beat-em-up essentially serves as a prequel — bleeding over. Finding a balance between accessible button-mashing and more cerebral stat planning is a difficult challenge, Toplansky said, but it's a huge opportunity to take the series in a new direction.

"It's a very exciting challenge," Toplansky said. "I think at the same time it's a chance to breathe some new life into it and explore it from a perspective that you wouldn't get a chance to see in an RPG environment. I think it's a chance to have a long look at a thing that, for a long time, focused on big high fantasy stuff, and try and make that something that's a little more accessible and a little more fresh."