Share All sharing options for: Zombie Tycoon 2 distills MOBA and strategy genres into a cross-platform package

Zombie Tycoon 2 is a cross-play, cross-save and cross-buy enabled strategy title for PS3 and PS Vita, and is also one of the most surprisingly enjoyable games I've played on the PAX East 2013 show floor.

Like its predecessor, Zombie Tycoon tasks you with controlling hordes of zombies to conquer towns one building at a time. However, the original title was a PSP Mini, meaning it was developed on last-gen hardware, and its file size had to clock in under 100 MB. Zombie Tycoon 2 has no such restriction; it's an Unreal-powered PlayStation Network title with cross-buy functionality, meaning whether you buy it on PS Vita or PS3, you'll be able to play it on both platforms.

Its newfound scope means a lot of features have been added to and revised for the sequel. The player's base is a mobile laboratory, from which new zombies can be spawned if they die (or, re-die?) in the field. It's also armed with an auto-turret which can pick off nearby foes, but it can be overrun easily by a large swarm of enemies. Players also control one of four boss monsters, each of which is armed with special abilities helping them fill different roles; damage, support, tanking and so on.

Like in the first game, all commands are given to your four units (your base, your boss and your two zombie hordes) using their respective buttons. Point to a location on the map and hit triangle to send your base in that direction. Press X to send your boss in after an approaching enemy. The D-pad also activates your boss monster's special abilities, making them something akin to a MOBA hero unit.

The single-player campaign tasks you with using these different mechanics skillfully to complete objectives on a huge map. The new multiplayer mode features a single, symmetrical map, with just one objective: Find your opponent's mobile base and take it over before they do the same. Though there are fewer moving pieces than your traditional strategy game, there's no lack of strategy involved. Do you rush them at the start of the game, hoping they've wasted units taking over nearby buildings? Or do you focus on taking over the town, gaining power in the process? 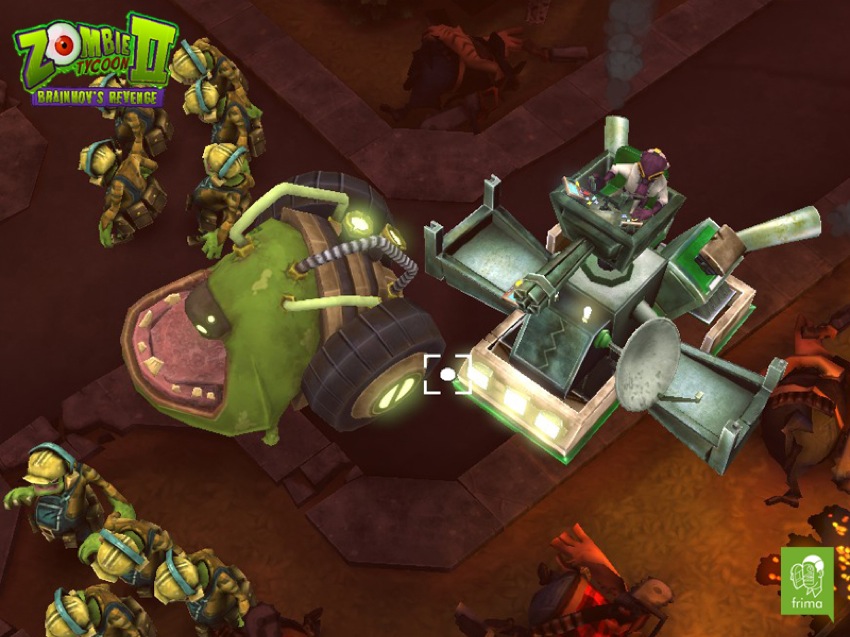 Martin Brouard, executive producer for developer Frima Studio, told Polygon that distilling the core concepts from the strategy and MOBA games that inspired the title was a tricky process. They wanted the title to be accessible, yet deeper than the series' first, bite-sized entry. Finding the balance between depth and ease of entry was difficult.

"Zombie Tycoon is certainly not what I'd call a MOBA game, but it has a lot of inspiration from that genre," Brouard said. "Trying to make sure we didn't go overboard with too much stuff is always something tricky. We had to decide what was essential, and what not to keep."

The title is well-suited to hop between PS Vita and PS3; progress in the single-player campaign can be sent from one to the other, and multiplayer matches can take place between the two. Brouard said that coming up with a cross-buy value proposition that worked for the company while being consumer-friendly was a breeze; it was making sure the game communicated across platforms that took some careful engineering.

"The hardest part is the cross-play," Brouard said. "Making the same game run on both platforms, making them communicate with each other, it's not as simple as it seems. A lot people were telling us, 'This is going to fail.' And actually, it was pretty hard, but we've been playing cross-play for two days here at PAX. It's rock solid and it's not even the final build."

Brouard is hopeful that Sony will lean harder on developers to utilize the cross-platform features of the PS3, PS Vita and, once it launches, the PS4. Frima's a multiplatform company, he said, but Sony has been a great partner for the games the studio has launched on PSP and PS3. When asked about plans for Sony's next console, Brouard said Frima is "thinking about a few projects" for the platform.

"We love working with Sony, they're really, really good to us," Brouard said. "They listen, they're interested, they help out. We'll continue to make games for their platforms as long as they have them."