How Game of Thrones Ascent became a story-based game, not a CastleVille clone

Share All sharing options for: How Game of Thrones Ascent became a story-based game, not a CastleVille clone

Disruptor Beam's social game take on the incredibly successful A Song of Ice and Fire fantasy franchise has all the trappings of the genre, but it doesn't quite fit the 'Ville mold — a fact that made its potential publishers nervous, the developer told Polygon at a PAX East demo.

Disruptor Beam CEO Jon Radoff said that the title was shot down by companies who wanted it to be closer to what social gaming players expect from Facebook titles. The project, Game of Thrones Ascent, isn't so far from the archetype, with its social connectivity, timer-based actions for crafting and combat, and minimalist presentation. However, it's a far more story-based ordeal than you might expect.

The game's story, which begins shortly before the assassination of Hand of the King Jon Arryn which sets the events of the Song of Ice and Fire series in motion, unfolds through simple quests which unlock as the player gains levels. Each quest is relatively short, featuring dialogue and player decisions which can affect your statistics, and inform later story events. Certain missions task you with sending one of your Sworn Swords, agents with different statistics in combat, trade and trickery, to do battle with your foes.

So much of the game's conflicts and cutscenes are determined by your statistics and allegiances, which are forged by your choices, the gear you've crafted and equipped, and the manner in which you've upgraded your keep. You'll ally with one of the novel's families (the Starks, the Greyjoys, etc.) to further determine how your house grows. You can also enter into alliances with other players to fortify your house, or send your Sworn Swords after them for your own person gain.

"They wanted us to do CastleVille with a Game of Thrones coat of paint on it."

It's a story-centric game of careful political planning, house management and troop training, none of which are the typical wheelhouse of the social gaming genre. For Radoff, removing the game's story-heavy elements at the behest of publishers was a dealbreaker.

"Going back to the origin of the company, I wanted to create game that was very story-based. I wanted to take this risk in the online Facebook game market where, I felt that if you put games with story in front of people, a lot of people would enjoy it, a lot different from what basically every other publisher was telling us to do in a game. They wanted us to do CastleVille with a Game of Thrones coat of paint on it.

"Because we stayed true to that vision, I think that's why ultimately George [R.R. Martin, author of Game of Thrones] was persuaded that he wanted to work with us. It took me a long time and a lot of persistence, and eventually got to know George, spent time with him on the game design, on what we're trying to accomplish, and he just fell in love with the idea of transplanting the political aspects of his books into a game, which is essentially a political strategy-RPG game writ large by all these people interacting with each other as real human beings on Facebook." 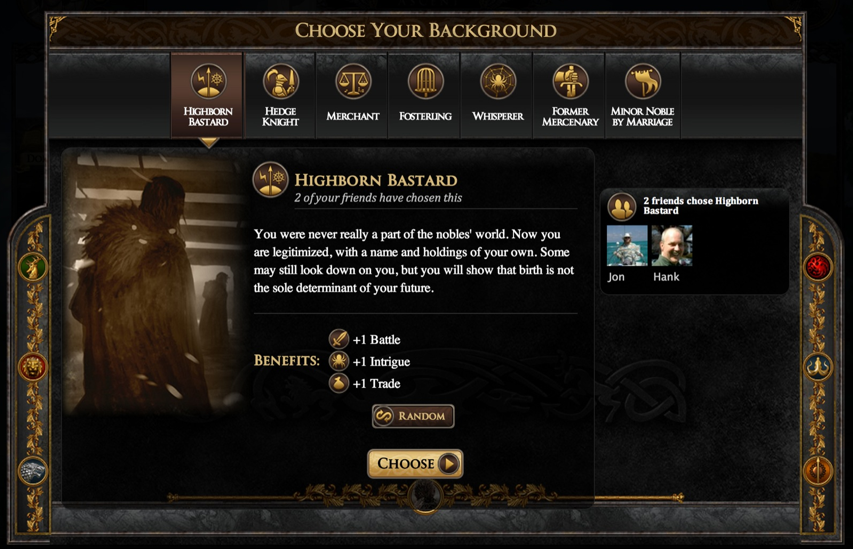 The collaboration between HBO and Disruptor Beam has been painless and free of any obstructionism you might thing would come as baggage with a franchise as large (and lucrative) as A Song of Ice and Fire. They support the efforts of content creators; not just internal ones, but those handling licensed products outside of the company, as well.

"HBO is sort of an interesting company," Radoff said. "More so than any big media company I've seen, pretty deferential to creators. They really let Dan [Weiss] and Dave [Benioff] really run the show for the show, they listen to George. Those creative guys have a lot of impact on the business guys. Once George loved it, HBO got behind it."

The game doesn't shy away from introducing the characters of the novels and television shows; one of the first missions sees you matching wits (an endeavor at which you'll almost certainly fail) with Tyrion Lannister. Though the game offers you choices and carries out the consequences of your decisions, it can't give you free reign over the fates of the characters and lore of the series — given that new content will be added to the game every week to reflect the events of that week's episode, it would be hard to add new content if you've been killing every Lannister you see.

Those kinds of conflicts are weeded out by Disruptor and HBO before the game's new content goes live.

"Any big license is going to require approval processes around new content," Radoff said. "So when you're talking about top tier stuff like Game of Thrones, Star Wars, all that stuff, you're gonna have to get stuff approved. But HBO has people on their end that just do that, and it's happened faster than I ever thought it would. I send them stuff, and they approve it really quickly.

"At this point I think they just trust us, because they know what we're going to do," Radoff said.

Game of Thrones Ascent is currently in open beta, and is available to play on Facebook.