Vigors are introduced like a quack remedy at a sideshow

Even if you've tried to maintain a total media blackout on BioShock Infinite, it would have been difficult to remain ignorant of the extended, torturous development cycle it's been through, or the number of major creative personnel who have come and gone during that time. You'd almost think it was hard to follow up the original game, which has been lauded and held up as one of the few conscious, authorial pieces of mainstream art that the video game industry has produced this millennium.

BioShock's mechanics and general game design were often more inspired than they were functional. The last third of the game and its climactic final boss battle have seen indifference and derision. Still, BioShock has held up as a game that capitalized on the strengths of the medium that had something serious to say, and questions to ask. But BioShock Infinite suggests Irrational isn't content to be known for art over gameplay a second time — or at least to let one serve as a crutch for the other.

With BioShock Infinite, Irrational has created an inspired, asymmetric action game full of huge environments, smart enemies, and more tools than I could manage to play with one time through. But even as Irrational improved the game underneath, it's the ideas presented and questions Infinite asked that left me quiet when the game was finished.

BioShock Infinite immediately disoriented me as it disorients player character Booker. There's a clear effort to play with any expectations of setting and content through moments of humanity and horror, wonder and ugliness. Irrational quickly establishes some basic ideas of what the world of Columbia and BioShock Infinite is. Almost as quickly, it peeled at the edges of my understanding of that world. Pop culture references and vague allusions to preconceptions formed from past games in the franchise create an uneasy tension, but more importantly, this atmosphere made me desperate to search everywhere for any hint of an explanation as to what made Columbia tick, how it got where it was and where it was going.

The world that Irrational has built is one of BioShock Infinite's greatest assets. It's also inextricably tied to every other part of the game. This might be in part because Columbia is still functional when you arrive — it isn't a wasteland reminder of a golden society. Most shooters and first person games are content to send you into the ruins of a society in some kind of bizarre archaeological expedition. Columbia begins BioShock Infinite in the midst of its Gilded Age, with disconcertingly shiny, happy people milling around.

Vigors are introduced like a quack remedy at a sideshow

Gameplay mechanics feel more rooted because they're clearly a part of everyday life to the Columbia that Irrational presents. Skylines connect parts of the city like railways, and only its starched police force is authorized to carry the skyhooks that allow more immediate, illicit travel along them. Booker only comes into possession of one when things go wrong at one horrific, prescribed moment. The superhuman ability-providing vigors, which replace plasmids from BioShock, are introduced at a sideshow like a quack remedy to first-world problems that quickly become real, pressing concerns, and at first, only the police in Columbia carry guns.

All of this sounds small. But the logical, organic placement of game design bits and pieces in a world that still lived and moved and reacted to my introduction — first with indifference, and then aggressively — make sure Columbia isn't background noise to BioShock Infinite's remarkably strong mechanics and game design. It all matters. The original BioShock was a shooter known for story and atmosphere, for cool ideas amidst mechanics that often weren't executed as well or as seamlessly as other shooters with less ambition. BioShock Infinite isn't as constrained.

Irrational introduces the basic elements of BioShock Infinite with enough space to let each one become a common part of your toolbox, rather than something I forgot about with the introduction of the next big thing. The skyhook functions as a melee device, which I was forced to use exclusively until I found a pistol, which had limited ammo, and the first vigor I found was Possession — which possesses enemies and/or mechanized defenses like turrets or more terrifying Patriots — which only acts as a support tool at first.

I started BioShock Infinite on the run as often as not, which forced me to learn what I could do. It's also helpful that BioShock Infinite controls smoothly, that its combat and platforming feel responsive, and AI is tuned to that. Enemies are less like animatronic monsters in a theme park ride, and more like active agents in an environment. As I progressed, I found increasingly more complex sandbox-driven encounters that seemed like essay exams on the mechanics I had learned. By the end of the game, I effortlessly moved from one skyline to another, picking off stragglers on the outskirts of an arena, then zipped over to the nearest airship while possessing a rocket turret to harass a larger force of enemies on another platform. 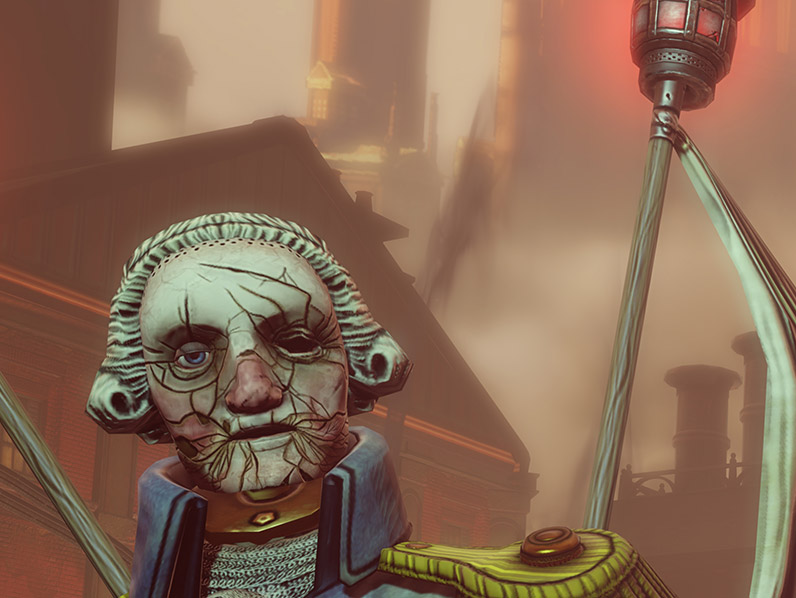 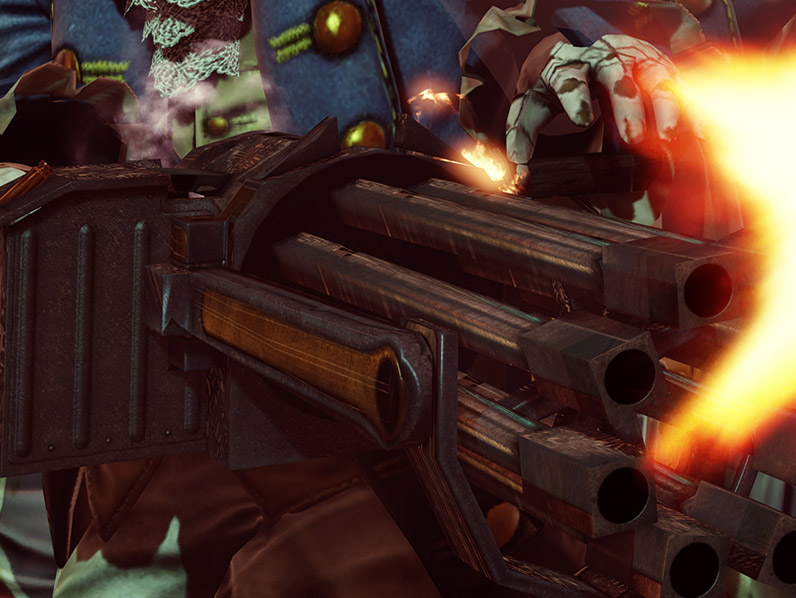 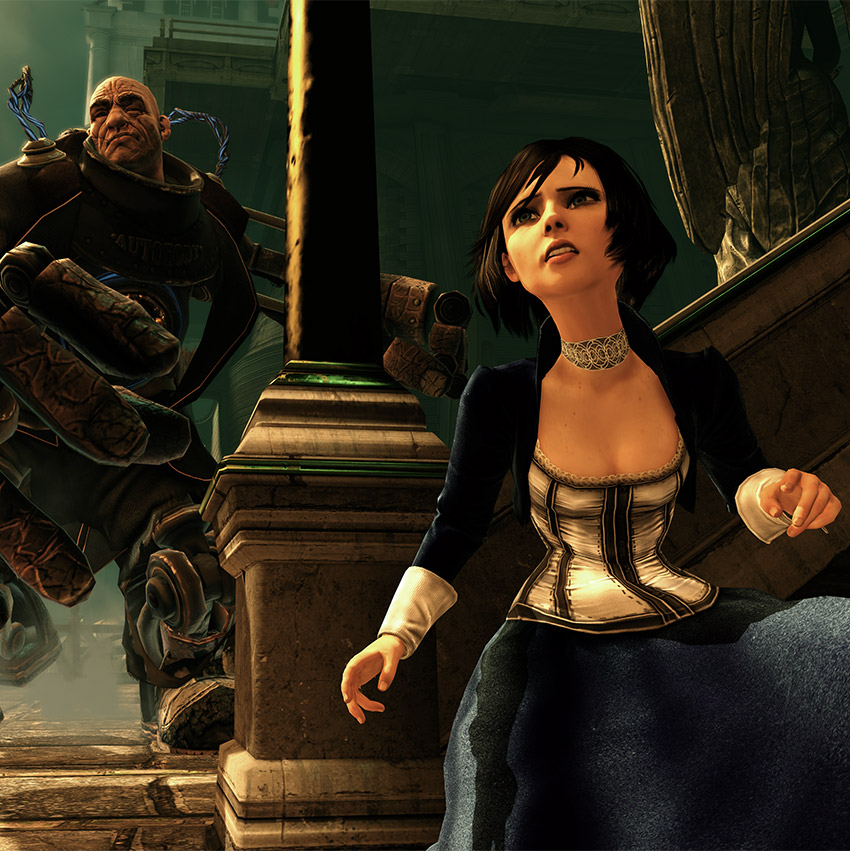 There was just enough escalation throughout Infinite to nudge my understanding of its systems forward. This is helped by little, thoughtful touches spread throughout Columbia — firing possession at the mechanical vendors throughout the city convinces them to helpfully cough up some of their extra money, for example. BioShock Infinite consistently delivers on the satisfaction of success driven by clever play. When it seemed like some new tactic or action might be a good or cool idea, I almost always found it worth trying. BioShock Infinite gave me so many toys that I couldn't help but leave some of them in the box.

Later on, Infinite is throwing so many enemies at you at once that new vigors and even weapons feel like a distraction. It was hard to study the nuances of Undertow when I was on the deck of an airship orbiting a platform with a massive, mechanized Handyman thundering toward me like some kind of steam-powered gorilla. New vigors and weapons were distracting insofar as the gameplay progression that BioShock Infinite establishes in its first half is more than enough to carry the game's encounters until the very end. I had enough tools by that point that I kept looking forward to the next chance to use them, to see how they worked in this new environment, against a new formation of enemies or new arrangement of environments. It all might have proven too much to take in, if not for the indispensable support Irrational provided in the form of Elizabeth.

While Elizabeth can open tears in the environment that will activate, say, a turret, or a freight hook to attach to or cover to hide behind, it's a testament to Infinite that you could forget she's around during more hectic firefights until you need her — and often, I didn't know I needed her until she told me I did. Whether she was tossing me ammo, or salts — which power vigors — or even health, it always felt like I was being provided a means to have more fun with the game, to push an attack a little harder, to wait less to get back into the fray.

Elizabeth's assistance is stunningly predictive. In other games this sort of semi-psychic bond between the player-as-Booker and Elizabeth would seem, well, convenient. But BioShock Infinite spends so much time building a tense, believable relationship between the pair that the symbiotic arrangement makes sense.

BioShock Infinite turns on the slow understanding that Booker and Elizabeth develop about each other and their relationships to Columbia. There's a back-and-forth of innocence and weary knowledge between Booker and Elizabeth — Booker's slow moral spiral from veteran of wartime atrocity to union-busting enforcer to, finally, kidnapper is contrasted with his confusion at the alien wonder of Columbia; Elizabeth is familiar with Columbia's hyper-technology and reality, but her sheltered innocence falters in the face of the truth of Columbia's origins, and her role in the machine that drives and rules the city.

As a player, I controlled Booker's direct actions, but my curiosity and reactions to Columbia's secrets and ultimate purpose were reflected and explored just as much through Elizabeth. There's enough humanity and emotion in the script and the performance to make it work where other games have fallen short.

Maybe it's because BioShock Infinite feels like it has something to say. While BioShock's depiction of Objectivism and the philosophies of Ayn Rand were clear criticisms, that game was content to set up a situation and stand back. BioShock Infinite is more assertive at pointing fingers at America's difficult historical relationship with ambition, empire, religion and race. 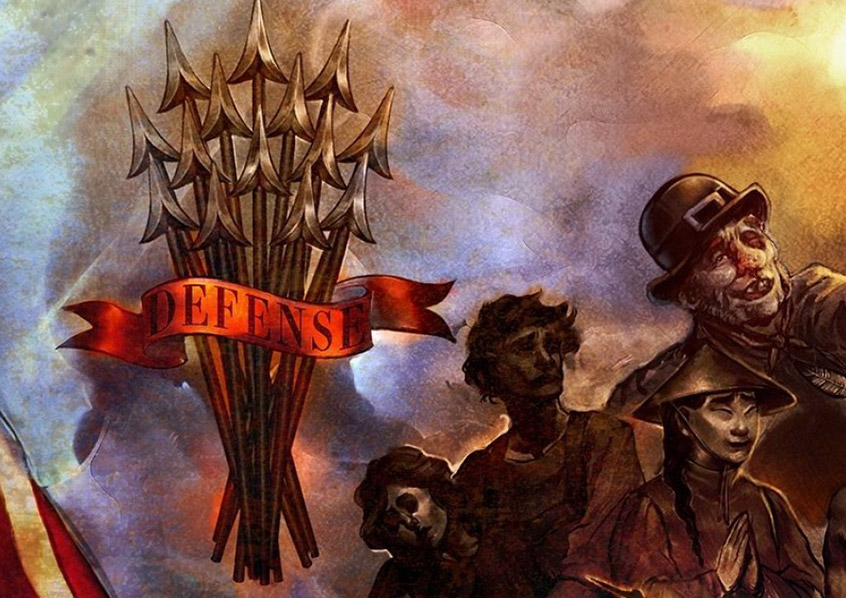 It was easy to laugh at the caricatures of aggressive capitalism and business run rampant in Rapture. It's more difficult to shrug off the colored/Irish bathrooms, the anti-semitic vending machines, the historically accurate propagandic depictions of Chinese, Indian and black people or the police force seals urging officers to "Protect Our Race." The setting is more fantastic, but the ugliness is more real. This bleeds into a more broad depiction of class unrest with the Vox Populi. Once things unravel, easy villains vanish and people are left in their place. 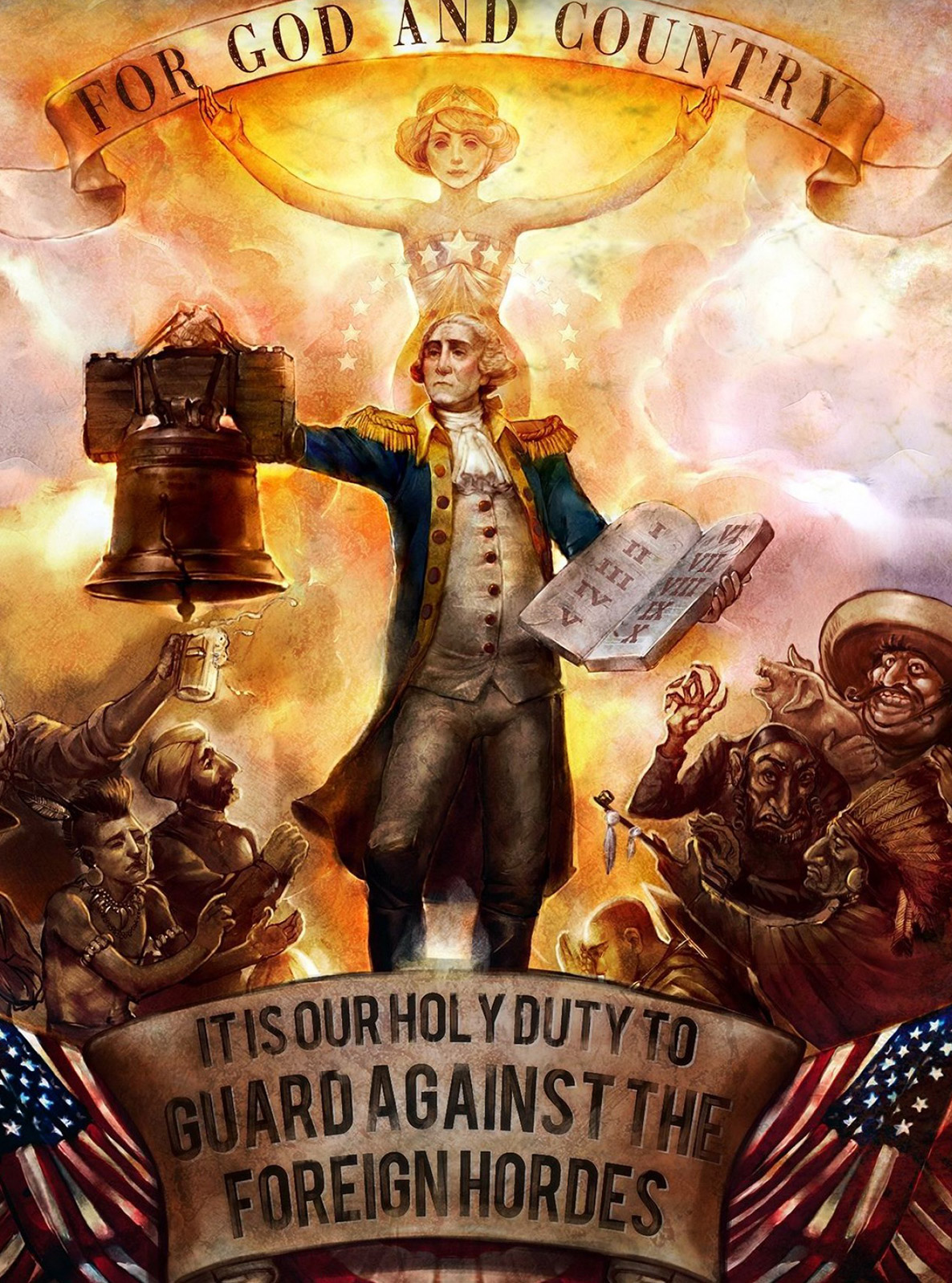 BioShock Infinite struggles at times to reconcile the political statements it appears poised to make with the deeper philosophical questions it asks about causality and the nature of reality. But by the end of BioShock Infinite my understanding of its world had been blown so wide-open that it was all I could do to navigate the final twenty minutes in stunned silence, which followed me through the credits and for the rest of the night.

I'm still thinking about BioShock Infinite now, days after finishing. Irrational built a believable, fantastic world rooted in dark pieces of American history. But for everything it has to say, for all the questions it asks —many of which have no easy answers — BioShock Infinite's big thoughts and complicated narrative don't obscure the brilliant action game that carries those messages through. It's hard to know if Infinite will prove to be another major point of artistic discussion and development of the medium the way that BioShock was. But in every way, BioShock Infinite lives up to the promise of its legacy, and it looks poised to establish a new one.