Share All sharing options for: PixelJunk Inc. is a made-for-Steam Rube Goldberg simulator

PixelJunk Inc. is a world-building, machine-manipulating, cooperative soup-cooking simulator designed from the ground-up for Steam. It's a genre turducken: real-time strategy, sandbox, tower-defense and platforming nested within each other and served all at once.

PixelJunk Inc. is also a work in progress, a big idea that, with guidance from the commenters on the developer's website, will change and expand as it nears release later this year.

We were recently shown a half-hour long demo of the poly-genre prototype. In the presentation, we watched as two chubby characters, drawn in sharp vector art, hopped about a 2D cavern.

The game's lead designer Rowan Parker explains the goal simply: to build a soup creation and distribution pipeline. Using a set of tools, the players construct a power source, plant and harvest mushrooms, transport the mushrooms, cook a soup and deliver the final product via space shuttles on the planet's gaseous surface. The task is somehow both simpler and more complex than it sounds, thanks to the game's various creations behaving like Lego, snapping together, working together with little input from the player.

Meanwhile, the collaborators must defend the compound from evil critters and the aforementioned toxic gas using turrets, barriers and a slap attack.

PixelJunk Inc. is a game about progress. Collect mass to build objects, build object to create soup, sell soup to buy blueprints, use blueprints to build better objects, and so on and so on amen. Minecraft meets Terraria meets Spelunky meets Scribblenauts is the elevator pitch I jotted into my notebook, but that pile-up of game names only begins to describe what the game is. Or more truly, what it could become. 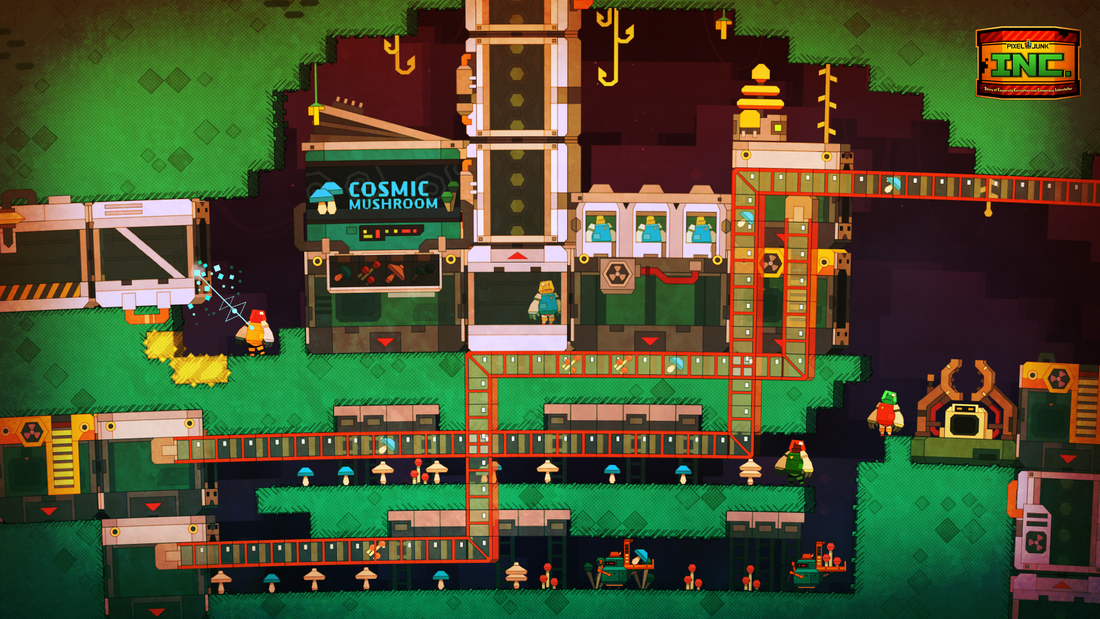 "It's unlike anything out there. That's why I wanted to make it," Parker says. The designer sits on the side of a long table covered in print outs of the game's concept art. The 2D landscapes resemble childhood drawing in the back of a text book, massive worlds filled with robots, hot lava and space craft.

It's tough to describe what the game is, because a lot of it is yet to be created or even imagined.

"We want to fit these things into the game," Parker says, pointing to the elaborate art work. He tells me about plans for space ships that, at the end of a game, will take the player to a new planet with different terrain and traps than the last.

The game's not even in alpha yet and Parker is already talking about post-launch. At launch, they guarantee four-players will be able to build together online. But they'd like that number to be 400. Or higher.

There's no real narrative to the game, rather the demo proceeds as a series of bizarre happenings. Here's what I remember:

The demo world is hand-designed, but we're told the final worlds will be procedurally generated — randomly created. The types of enemies that attack the base may be tied to your progress with giant bosses triggered by milestones. It's up in the air. As are the game modes. Parker says they'd like an endless exploration mode and one with an end goal, like taking a ship to the next planet. 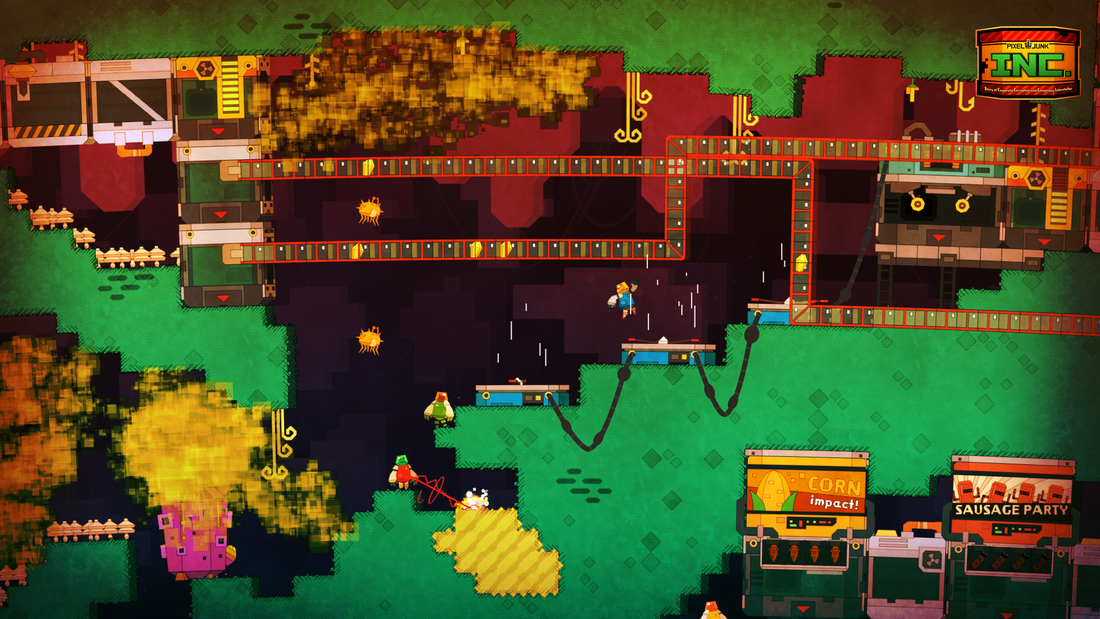 The endless mode sounds the most interesting. Parker wants the world to be big, so big that one player would never travel from one end to the other. "You could make a giant machine that's entirely automated," he says.

For now, though, Parker is merely pleased to be working on the game in an official capacity. Last year, PixelJunk Inc. was a time-consuming side-project. A job away from his job.

"For months we were working on it half in secret," says Parker. "We worked on it through Christmas holiday and after that Dylan [Cuthbert, Q-Games CEO] gave us the okay."

PixelJunk Inc. will be released on Steam later this year, and — if things go as Parker hopes — will continue to be expanded and evolved with the help of its players.