"We are here not to bury Rock Band, but to praise it," began Aaron Trites, community manager for Harmonix Music Systems, at the Rock Band panel during PAX East 2013. But in eulogizing the Rock Band franchise — last month, Harmonix announced its regular schedule of downloadable song releases would end on April 2 — the studio also put to rest some longtime questions about incidents in its five-and-a-half-year history, and gave its fans some closure.

After noting they would try to tread carefully, lest they draw the ire of the studio's legal team or burn bridges with the music industry, the four Harmonix panelists launched into a fascinating hour of discussion about everything that went into the bulk of making Rock Band happen: licensing songs for use in the game. The studio also shed some light on what John Drake, the company's director of brand management and public relations, called "moments of turbulence and confusion" — a few hiccups along the way.

Drake and Trites first turned the panel over to Chris Rigopulos, vice president of music operations (and brother of CEO Alex Rigopulos). Rigopulos gave a comprehensive overview of the vicissitudes of licensing music for Rock Band, and as he went on, the crowd's level of wonder grew.

"We are here not to bury Rock Band, but to praise it"

Rigopulos began by noting that in order to get a full master recording in Rock Band, Harmonix had to license both the composition (the written song — notes and words) and the recording (a particular version of the song we might know, like the original album cut or a live version or a later re-recording). The writing credit goes to the individual people responsible for creating the song; other parties involved in the process include managers, publishers and record labels, while important considerations include compensation and international rights.

Four major roadblocks to music licensing existed for Harmonix: The artist could've simply declined; relationships between rights holders could've been strained from bad breakups; the money the studio offered might not have been enough; or the multi-track masters might not have been available.

Rigopulos illustrated with a flowchart the complex web of parties and relationships that had to be contacted and negotiated with before a song could appear in the game: 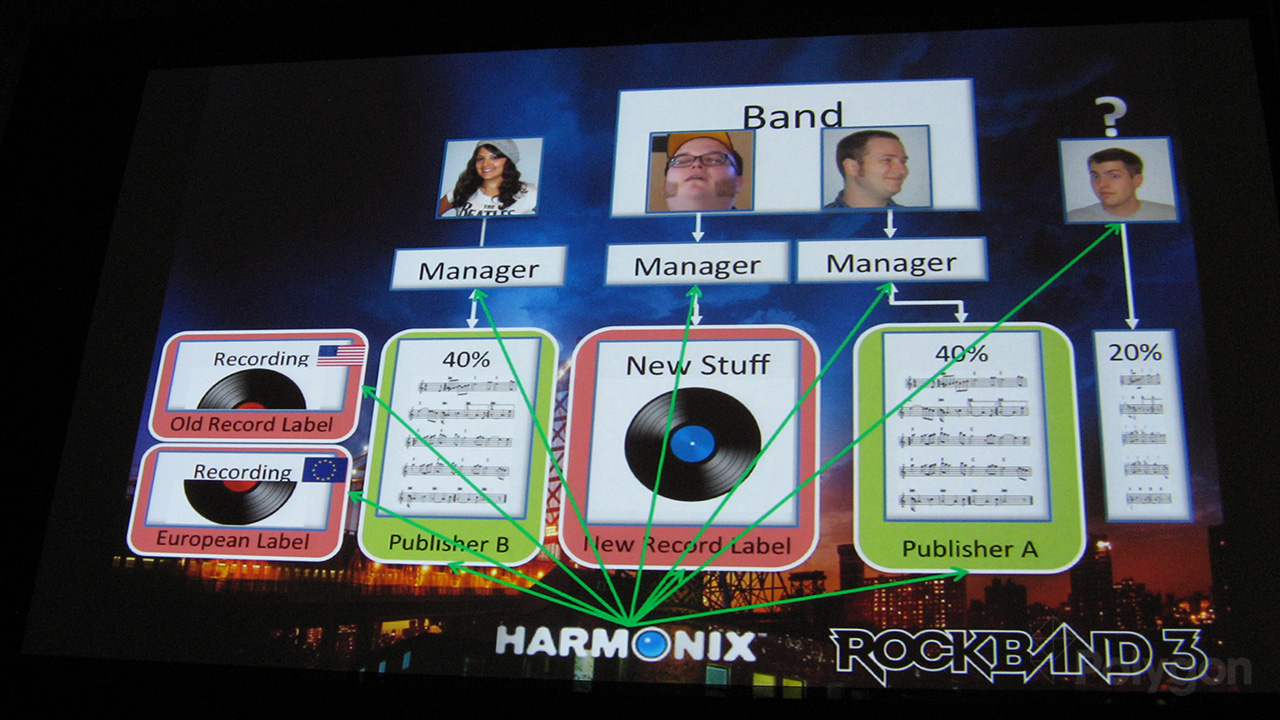 Next, the panelists shifted to mishaps on the part of Harmonix, former Rock Band publisher MTV Games and the artists themselves.

"In Rock Band's infancy, we were a precocious, scrappy gang," said Trites. "We would sometimes get overexcited and maybe say, 'Hey, this thing's coming,'" except it may never actually have arrived.

Aside from DLC announcements that didn't pan out, like The Who's Who's Next and Nirvana's Nevermind, Rock Band's history is dotted with two major premature announcements: Rock Band: Japan and a Pearl Jam game.

Drake said Harmonix was tremendously excited for Rock Band: Japan — "so excited that we announced it, which was a mistake." (The studio's press release, dated June 2, 2008, is still up on the Rock Band forums.) Rock Band: Japan was a Rock Band title for all intents and purposes, although it contained Japanese music and was fully localized for the country. According to Harmonix, it fell through because "international licensing is very hard," and because the game's bulky plastic instruments were poorly suited to the small living rooms that homes in Japan tend to have.

"We actually made this game for a while," said Drake, while showing footage of the main menu and gameplay (without audio, since Harmonix didn't have the rights to the songs).

"we would sometimes get overexcited"

Something similar happened less than a year later. Pearl Jam announced on May 11, 2009, that it was working on a "forthcoming Rock Band project" with Harmonix and MTV Games, and asked fans to vote on "the best versions of Pearl Jam live songs" for inclusion in the game. (See the press release here.)

"Are you sure that band's ready to announce that we're working on a game with them?" said Drake, giving the audience an idea of Harmonix's reaction. The studio later clarified to Polygon that the announcement decision was "mutual."

Pearl Jam: Rock Band was in development for some time as a title focused on bringing the experience of a Pearl Jam live show to life in Rock Band. Harmonix was planning to use many live recordings in the game, and the studio put footage from live performances as well as art from the band's 2009 album, Backspacer, behind the traditional Rock Band note highways. The panelists showed mock-ups of the interface, since Harmonix's lawyers prevented them from playing even silent footage.

Harmonix closed the panel by going through three of the franchise's most-requested bands: Muse, Pink Floyd and Led Zeppelin.

Muse became something of a cause célèbre for Rock Band fans; it's one of the top-requested artists for inclusion in the song library. As for Pink Floyd, which is one of Rigopulos' favorite bands, Drake said Harmonix "had good conversations [with the band]; it just never came together."

"Are you sure that band's ready to announce that we're working on a game with them?"

The studio wanted to reiterate to its fans that it hadn't been ignoring their requests — they tried over and over again, even producing proof-of-concept pieces to demonstrate to the artists how cool a Floyd or Zeppelin game could be. Drake showed a mock-up of a Pink Floyd Rock Band title with appropriately psychedelic art, and an animatic for a Led Zeppelin game featuring digital versions of lead singer Robert Plant and the other band members.

Drake quickly followed up with a clarification, saying, "We were never actually at a point where [Led Zeppelin: Rock Band] was a game that we were working on." The pieces were done as pitches to Pink Floyd and Led Zeppelin, proposals for potential titles featuring the respective bands; no partnerships were ever finalized.

When Rock Band's weekly DLC schedule ends on April 2 with Don McLean's "American Pie," Harmonix will have released new songs for 281 consecutive weeks; the series' music library will contain a total of 4,254 songs from 1,657 artists. And Rock Band songs have been downloaded more than 130 million times to date.

When the panel ended, the audience gave Harmonix a standing ovation.

Correction: This article previously stated a potential reason for why Pearl Jam: Rock Band was never released; we have since been notified that it was inaccurate. We've also been told that the panelists misspoke: The music request numbers applied to all artists and songs, not just Muse.