Scrolls, the next game from Minecraft dev Mojang, launches in beta next month

Share All sharing options for: Scrolls, the next game from Minecraft dev Mojang, launches in beta next month

Scrolls, the next game from the developers behind Minecraft, will come to PC late next month as a beta sold at a discounted rate, Mojang's co-founder tells Polygon.

"We are aiming for release at the end of April and it's looking pretty good," said co-founder and game designer Jakob Porser. "We've been wanting to release it for awhile because we want to have the same sort of development as Minecraft. We'll release it early at a discount. With the help from our community, we'll take the game to the next level and see what we want to do and what they expect out of the game and you can work around that."

Porser said the team is on the cusp of rolling out the open beta for the game and plans to sell it at a price similar to what Minecraft was sold for. That game, which has nearly topped 25 million copies sold across the mobile, PC and Xbox 360 platforms, sold for €10 initially, then €15 and finally €20 when it was in a more complete state.

While the initial release for Scrolls will be on PC, a Mac version is planned next, and the team of about a half-dozen developers is looking at Linux as a potential platform too.

Scrolls is a collectible strategy trading card game that blends elements from both classic trading card games and board games, Porser said. While the game's story was written by Penny Arcade's Jerry Holkins, it isn't unclear when or if that story will be incorporated into the game. Right now that's not the plan, but that could change.

"We'll see if we get to that stage again," Porser said. ‘That's not off the table by any means."

The game will launch with multiple modes including, hopefully, a "rich single player experience."

"The AI is extremely well down and it's constantly kicking my butt," Porser said.

Like Minecraft, Mojang's plans for the game include a single purchase price and a lengthy, deep support for the game. There is some talk of allowing people to spend money to do things like upgrade the look of their avatar or get deep statistic tracking, but in general the company has very little interest in any sort of non-traditional monetization.

"The core gameplay experience we want to keep as far away from monetization as possible," he said.

The continued, free support of their games, is an important element of what the company does, Porser said. It set a high level of expectation from gamers, but Porser says it's a system that has worked quite well for the company.

"I don't think there is anyway of avoiding that expectation, but at the same time you can't really complain," he said. "It's working. We like to think of the way we develop games as more of a service."

I asked Porser if the team has any anxiety about this second game. Are they worried that they won't live up to Minecraft? How do they judge success in light of Minecraft's staggering sales.

"That's hard, Minecraft is doing so well," he said. "People have asked, do you feel like this is a difficult second album and it's a valid question.

"The way we approach it is this is the game we wanted to make," he said. "We realize it's a narrow genre compared to what Minecraft has become. I have no expectation that Scrolls is going to sell way beyond Minecraft, absolutely not. What I would like is for the game to find a core, a bunch of players that actively love the game. The beautiful thing with Mojang and the success of Minecraft is that we really don't have that pressure, that every game has to sell x amount of copies or we're going to go bankrupt. So we're in a good position that we can experiment and try some of the stuff that we want to do and we are going to do that."

That includes making games like Scrolls that even other developers and venture capitalists have told them is a bad idea.

Porser says when that comes up, the company tells them that they are doing what they're interested in.

"We don't want to screw people over by saying, ‘Here is Minecraft 2, it's exactly like Minecraft 1, but give us more money,'" he said.

And Porser sees some promising signs that they've made the right decision. There are about 1,000 people in the game's alpha right now, and those players seem to love the game, spending a lot of time playing it. 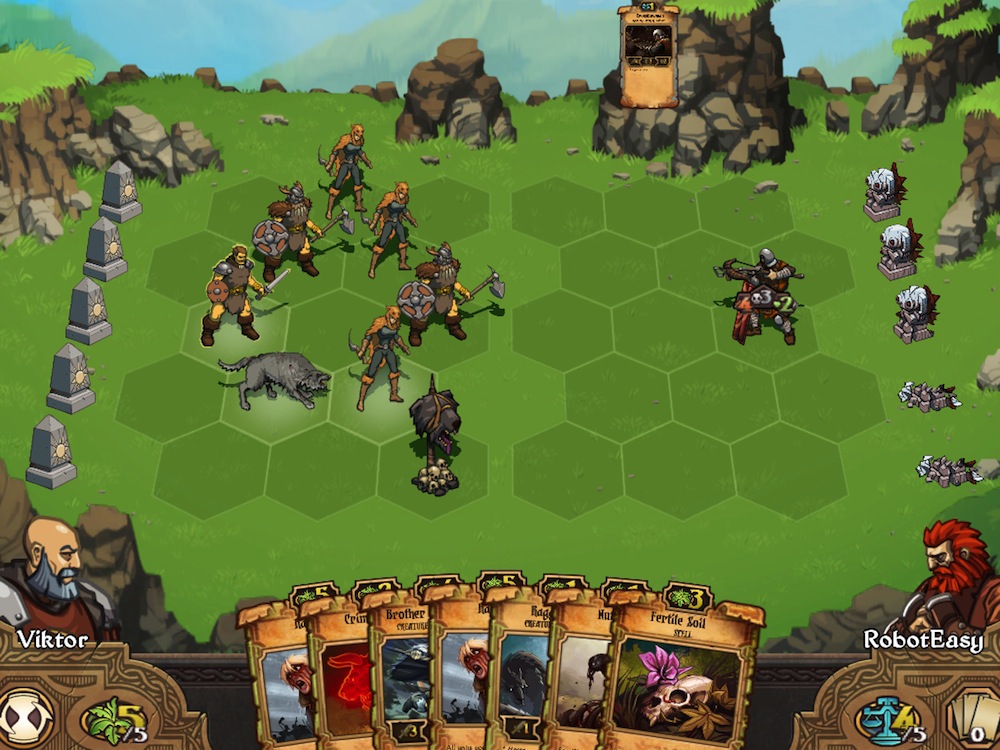 Just last week, Blizzard announced a trading card game of their own: Hearthstone: Heroes of Warcraft.

While Porser doesn't believe their announcement is in anyway a response to Scrolls, he is heartened by the news.

"My initial reaction was ‘Awwww,' because it's Blizzard," he said. "I'm a huge Blizzard fan, they make great games. But at the same time you can view this in so many different ways. This could potentially be something that could broaden the market. Also, if Blizzard believes in this genre then maybe we're moving in the right direction.

"In the end the consumer gets multiple choices and we have to step our game to try and make the best possible product, the best possible game we can. If Blizzard makes the better game, then all credit to them and we need to move on to something else."