Tenya Wanya Teens is a game about saying 'I love you' and peeing, and not confusing the two

Share All sharing options for: Tenya Wanya Teens is a game about saying 'I love you' and peeing, and not confusing the two

Katamari Damacy and Noby Noby Boy creator Keita Takahashi showed off his new game, Tenya Wanya Teens, at a party in San Francisco on Wednesday, revealing a two-player game that's about brushing your teeth, doing division, farting, clawing at salmon, saying "I love you" and peeing.

Tenya Wanya Teens is competitive awkwardness, as players try their hardest not to accidentally shower in front of their classmates or fart in front of a girl they have a crush on.

Takahashi's game — a collaboration with Venus Patrol and Wild Rumpus — plays something like a side-scrolling beat 'em up. Two players, each equipped with their own 16 button controller, take control of a pair of young boys. As they walk from left to right, screen to screen, the boys are presented with an action — punch, photograph, brush your teeth, act like a grizzly bear, pose, etc. — by a parrot. "Punch!" he'll say, when presented with a trio of aliens. "Rock out!" he'll command, when a pair of microphone stands appear.

Each action is color coded to a lighted button on the game's custom controller. So, tap the red button and the boy will punch off the head of an alien. Tap the blue one and he'll rock out with an electric guitar, wailing into the microphone. Perform those actions and you'll score points. 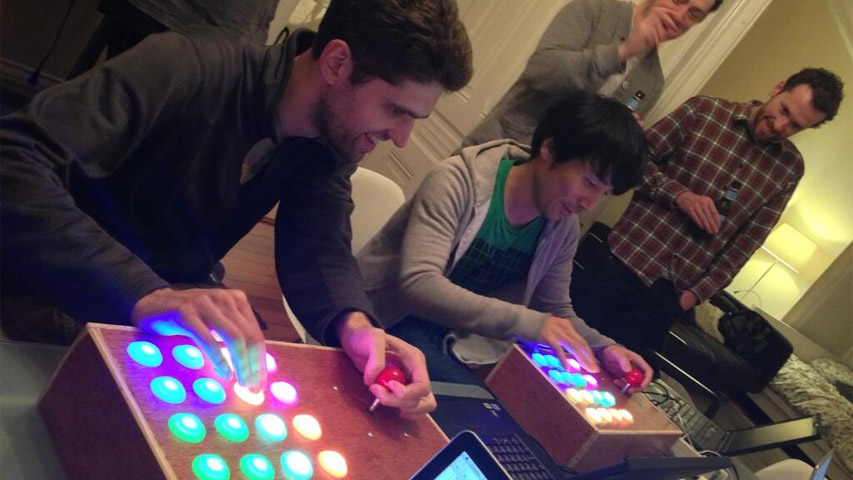 As new actions and new button colors pile on, Tenya Wanya Teens becomes hilarious madness. When the boys walk into a classroom filled with microphones, a cute girl and shower heads, the frenzied rush to perform all those actions — before the other player can — kicks in. Don't accidentally shower in front of the girl! Don't pee on her shoes! Why are you brushing your teeth in front of the microphone?!

The charming absurdity of Takahashi's previous video game work is present in Tenya Wanya Teens. Accidentally peeing in front your classmates is cute, not crude. (Even the urinals the boys are supposed to pee into sprout wings when urinated upon and fly into the sky.) Hearing the boys chant "Shampoo!" while washing their hair and making silly poses while snapping pictures of UFOs make playing Tenya Wanya Teens the "right" way a laugh out loud experience, even though flailing and failing wildly is more frequently the highlight.

Venus Patrol's Brandon Boyer says the creators of Tenya Wanya Teens are "thinking about how we can bring the game to your home, even granted its poly-button insanity." The game will make a second public appearance at GDC later this week during the Experimental Gameplay Sessions on Friday, March 29.

Hold onto your butts, the Cocaine Bear trailer has arrived