Share All sharing options for: Packed with technology, this six-sided die reinvents a 5,000-year-old game piece

Just under $40 is a pretty hefty price tag for a traditional six-sided die, but the people behind this high tech version of the 5,000-year-old random number generator believe all of the bells and whistles built into the Dice+ warrants the cost.

The blue and white plastic and rubber Dice+ die is packed with six multi-colored LEDs that can flash, glow or pulse a number onto the side of the die, an accelerometer, a magnetometer, a thermometer, Bluetooth for delivering roll results to computers or mobile devices and built-in anti-cheat detection.

When a player rolls the die, the numbers flash red if the die isn't rolled hard enough, is stopped mid-roll, lands tilted or is changed after a roll completes. If the roll is considered bad, the die also won't automatically send the roll result to whatever computer, tablet or smartphone game that is being played at the time.

"The basic concept is to power board games and bring people back together in the living room so they can play together, see each other and have social interaction," said David Gatti, marketing director for Dice+. "Playing online is fun, but we think playing with other people is much better."

While Dice+ could be used to play regular table top games, it's really designed to interface with the board games that have made the leap over to tablets, smartphones, and one day, smart televisions.

The developers believe players would rather have the heft and feel of rolling a real die when playing a game like Monopoly on the iPad, than use a built in number generator. And because the die has built tech to detect motion, the die can also be used as a physical motion controller. In one tech demo, I held the over-sized die in my hand and gently tilted it to control a plane flying through a virtual city scape on an iPad. But the core experience is that of simply rolling a die. 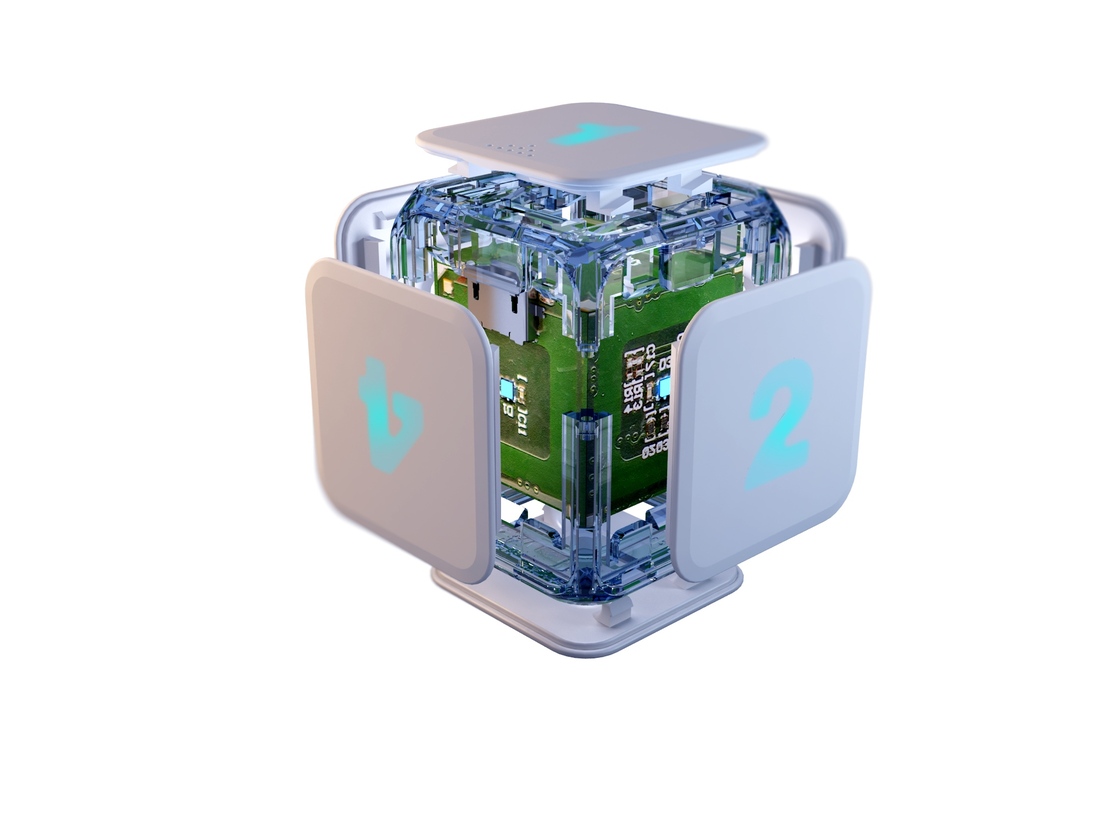 Tearing down something so simple, an evenly weighted cube with six different numbers represented on its six sides, and reinventing it as a technological device is a surprisingly difficult task. The die uses an array of LEDs that project fixed numbers on each side of the cube. The numbers can be displayed in different colors and pulse. The die itself can detect movement, has a battery that delivers about 20 hours of play and has that in-board basic programming to know when someone is cheating. And of course, the Bluetooth is there to pass the data on to your device automatically.

All of that tech has to be crammed into small cube and then, perhaps the biggest challenge, the entire die has to be perfectly weighted.

Janusz Bossy, the software development manager for Dice+, said that the team used proven statistical methods to see if the die rolls were truly, fairly randomized. That mean getting the dice out to a bunch of people, including 50 or so in the office, to have them roll, re-roll and re-roll the dice until they logged and tracked 18,000 rolls. Then they used software to analyze the data, to ensure that the numbers were truly random and they hadn't just created a high tech set of loaded dice.

These die, a combination of electronic and old-school, seem a bit extravagant, but the team say they're confident there's a market for the devices.

"For a player, you can be 3 years old or 93, this is a unique product that everyone knows how to use," said Steven May, head of Dice+' global launch. "It's the first controller you were ever given."

May says according to his research there are about 11,000 registered board games in the world that use physical dice. Of those, he said, about 4,000 have been converted to some form of digital play. All of those games could, in theory, one day support Dice+.

"It's the first controller you were ever given."

While the technology could be built into a variety of dice shapes — think 20-sided — the team decided to start with the most frequently used, the classic six-sided die. May said most games use a single die as well, which is why they designed around the idea of a single die. Though the technology could support as many as 10 dice at the same time. It just might be hard to cram that many of them into your hand at once.

May's chief job is reaching out to the likes of Mattell and Hasbro and selling them on the concept. While the team hasn't landed any deals yet, he says they seem interested.

When Dice+ launches this summer it will come with seven games and some simple technology to track dice rolls and provide statistics to players. The games are all developed in-house, designed to be simple and fun, but also to provide a demonstration of the dice's tech. Eventually, the team hopes to have a portal filled with games that people can find and purchase that will support the die.

There's an admittedly large part of the vision for the device that relies on what developers will do with all of the tech packed into that durable little cube, there's also an expectation that game makers and game players will prefer a physical roll to a virtual one.

When I tried the die out on a closed laptop sitting in my lap, the die felt solid, albeit a little large. The over-sized die tended to need a bit more wrist action to get it moving, then you'd expect, but it tumbled across my case as you'd expect. Because the die is biggish, and the anti-cheat software looks for deliberately short rolls, I did find that I had to re-roll the die more than I would have expected to, to land a roll considered fair. Used on a large table, this probably wouldn't be an issue.

One challenge that the bit of tech faces is the audience they are chasing. People who like to play die games with real die, are pretty picky about what they roll. This die, even with all of its anti-cheating software and statistic tracking, may have a hard time winning those hardcore gamers over.