Share All sharing options for: New MOMA exhibit embraces the art of video games as it explores their design

Their inclusion, as the center piece of a new design installation which runs through 2014, is the latest in the growing trend to showcase video games as art. But in this case, the art is assumed and it's the design that is being celebrated.

The video games of MOMA, 14 in all, are housed in a larger gallery installation that focuses on the vitality and diversity of design. The exhibit highlights not just the ubiquity of design but illustrates the branching of this school of practical art, tracing the blossoming of applied, rather than theoretical design.

Applied Design features 100 works, an eclectic mishmash of surreal objects. There's a portable homeless shelter designed to be tucked away in a pocket when not in use and inflated by city steam grates when it's time to sleep. There's a steel and birch plywood earthquake-proof table and a vase-shaped beehive made by 40,000 bees over the course of a week. A massive boulder-sized dandelion-inspired ball of bamboo and plastic resting in one corner of the exhibit was designed to detect mines in Afghanistan by rambling across suspected minefields guided by errant puffs of wind.

The most notable theme in this menagerie of practical art, though, are the video games. That's deliberate. While video games make up less than a quarter of the exhibit, this first appearance of gaming at the Museum of Modern Art is at the heart of the installation, said Kate Carmody, curatorial assistant at the museum's department of architecture and design.

"This is a permanent collection rotation that we do every year," Carmody said. "In these rotations we try to highlight recent acquisitions."

In the case of Applied Design, the museum is using their recent acquisition of these first 14 video games as a way to highlight the idea that design is everywhere, even in the games you play.

Carmody said that designers are artists bound by more tailored constraints. Designers, she said, have to both create art and make sure it is functional and serves its purpose.

Viewed side-by-side, Pac-Man in action and playable and Pac-Man's static code, indecipherable, the dichotomy is perhaps the most obvious realization of the exhibit's goal: Art bound to form and function, design at play.

"It's like art, but you have to work within these parameters," she said.

When curating the growing video game collection, department officials looked at a number of criteria to help them decide which games both met their definition of meaningful applied design and provided a sense of the scope of artfully designed gaming. They looked at the aesthetics of the code that powers and creates these playful interactions. They examined the behavior a game helped create in its players, the space it crafted in the digital world and the way in which time is expressed and incorporated in a game.

Ultimately they came up with a list of 40 games they hope to curate and archive with the walls of the Manhattan museum, 14 of which they managed to obtain in time for the exhibit.

Among the games visitors can view are Dwarf Fortress, Another World, flOw and Myst. Most of the games run on their original hardware. The exhibit itself is oddly austere for a collection of video games. Shoulder-high monitors are spaced evenly apart along the black-grey walls of the exhibit rooms. The line of monitors are punctuated by simple white cards, each describing a game and its inclusion in the exhibit. Most of the games are playable. A visitor can pluck up the headphones hanging by a hook near a monitor and lift the black controller from a featureless shelf to experience the game.

When the games are too complex to be easily understood through a short play session, the museum has opted to include a video walkthrough or guide instead. The SimCity display plays a loop of a city being built and endlessly edited, its monitor rests within a massive 5-by-9, floor-to-ceiling grid of colorful squares depicting stills of an array of sim cities.

The exhibit for the massively complex and massively popular space simulator Eve Online consists of a video running on dual monitors embedded within a wall decorated with the game's fictional astronomy. 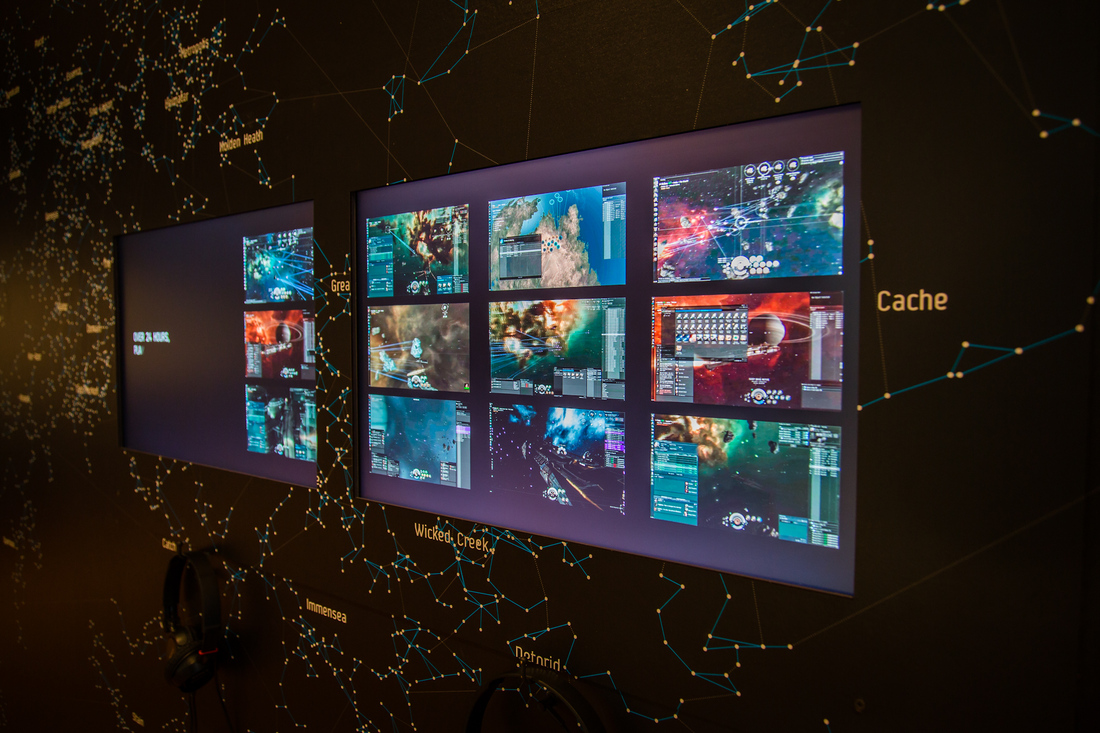 The servers for Eve Online's half-a-million subscriber base typically run on a securely stored supercomputer hidden away in London. But part of MOMA's efforts include not just displaying, but archiving their collected works.

Eve's Olafsson said they are working with MOMA's conservation team to provide them with a set-up capable of running a completely standalone EVE Universe on custom built hardware and software, so that "a bored researcher 500 years from now, can go down to an Indiana-Jones like warehouse, dig up the crate with EVE on it and fire up the server, undock and get blown up by a pirate NPC."

"It will be a lonely place though, as EVE is just as much the people that play it, as it is the art, code and content behind it," he said. "Those we can’t preserve as easily as the hardware and software."

That particular video, meant to depict the full breadth of the game's intricacies, was crafted out of a day's worth of video captures by nearly 200 Eve Online players, said Torfi Frans Olafsson, Creative Director at EVE IP Development Division.

The game developer put out a call for help when they were asked to make a video, and ended up receiving 16 hours of raw footage of fleet battles, space flight, mission runs, trade routes; the beautiful and the ugly of the persistent, online world.

The team cut the video down to eight minutes, interspersing the gamer captures with cleverly crafted infographics pulled from 1.2 terabytes of data compiled during the day of play.

"We decided to focus on the universe itself and the complex interactions the players have with the world, the scale and their effort," Olafsson said. "We use two synchronized full HD monitors for the final display, often with gameplay on one side playing and infographics on the other one. We are pretty happy with the final result."

Around the corner from the Eve Online display, past a video silently depicting the many objects circling the Earth at any given moment and next to prints of pig wings created with living engineered tissue, sits the rest of the video game exhibit. Here visitors can try their hands at the painfully succinct Passage, play the original Tetris or even spend some time with Pac-Man.

The exhibit comes to an abrupt end at a glass wall, just past Pac-Man and a visualization of that coin-op classic's code in a large framed print called Distellamap (Pac-Man).

The framed print is the exhibit's exclamation point, a game skinned of its colors, motion and music; code laid bare in columns of black and blue text and swoops of connecting grey lines.

Viewed side-by-side, Pac-Man in action and playable and Pac-Man's static code, indecipherable, the dichotomy is perhaps the most obvious realization of the exhibit's goal: Art bound to form and function, design at play.

Where traditional designers craft their applied works out of earth and wood, honeycomb and metal, games' designers work in the ephemeral, building lattices of code to frame behavior, impart emotion, deliver a place.

So it seems most fitting that a space that embraces what Carmody describes as beauty discovered in the constraints of technology, now includes video games.