The meaningful murder in BioShock Infinite

Share All sharing options for: The meaningful murder in BioShock Infinite

Like many works in the video game industry, Ken Levine's creations are soaked in violence.

The difference, though, between his games — titles like BioShock and the soon to be released BioShock Infinite — and games like Call of Duty or Battlefield or Gears of War, is that Levine's games are thoughtfully violent.

At least that's what I tell Levine during a recent interview at his Quincy, Massachusetts offices. After playing through the first hour or so of his game, Levine and I sat down for an on-camera interview. Over the next hour we discussed the philosophical underpinnings of his game's stories and settings, the pride he has about the ending of BioShock Infinite, the influences of the 1893 World's Fair and the book that charted that real world event's alluring and murderous creations.

As the interview wrapped up, I tell Levine that the reason I like his studio's games is because they seem to be thoughtfully violent.

"You make games with shooting, but it serves a purpose, as opposed to something like a first-person shooter that has multiplayer where you're just going through the actions over and over again," I tell him.

Is that by design, I ask, or a happy coincidence?

"I don't go into these things with a larger social meaning," he said. "I think there probably are some game makers who think of themselves as having a nobler mission. I think to some degree that may be a bit of an illusion. I get very nervous when I hear game makers start saying there should be only these types of games only those types of games, because I like all kinds of games. I like first-person shooters. They don't need to have a larger purpose. They can be fun. That's OK."

But, Levine went on to say, the more depth a game's narrative provides, the more connection a player forms with the protagonist, the harder it is to avoid creating a sort of emotional dissonance.

"You start to see some dissonance around the edges of the narrative in an FPS because you have this very over the top experience and then you have a more grounded sort of narrative experience," he said.

That's something they started to run into with BioShock Infinite's protagonist Booker DeWitt and Elizabeth, the young woman he is sent to Columbia to find and escape with, Levine said. That's in part because the developers spent so much time trying to create an Elizabeth who isn't just a sidekick, but is more emotionally engaging and autonomous, and less robotic.

"As you try to get characters like Elizabeth and people in the world who are more believably motivated, you start thinking about the fact that your main character is committing, not just acts of violence, not just physical acts of jumping and running, but the ability to take punches and bullets and all that," he said. "They're obviously quite fantastical. That stuff starts to get a little strange."

It's obvious, not just in Levine's comments, but in the game's design, that the notion of a player-driven character who is on some level cast as heroic but also commits a shocking number of murders, was something that the developers wrestled with.

When DeWitt dies at the hands of a careless player, for instance, the death has weight. There are consequences, beyond having to restart a section of a game, to a player's death. The experience of dying in-game deliberately takes you out of the moment of play, perhaps giving players a second to reflect.

Levine says that's one of many occasions in which the developers noticed dissonance "creeping in" to the game and designed a solution to thwart the issue. The bigger issue of how Elizabeth, a smart, powerful female character, reacts to and deals with DeWitt's own violence, committed again and again in her defense.

The answer, while a slight spoiler, is fascinating.

"There's a scene in the game and this is a little bit of a spoiler, where Elizabeth sees you being violent for the first time and she has a very strong reaction to it," he said. "We were in this weird spot because any human being that you're going to believe is going to have a reaction. Anyone who's been locked up her whole life, who's never seen violence, is going to have an obviously very strong reaction to that kind of violence. And she does. So Booker sort of explains the rules of the world to her, that somebody wanted her locked up like that. She was kidding herself when she thought they were just going to walk out. It is a weird moment because generally you don't beg the question in a game, right? Just people start shooting people and it's fine."

The same is true for movies, though Levine points to one specific movie that also seemed to deal with the inherent disconnect between a charming leading man who is also a mass murderer.

There is a scene in the 2006 remake of Casino Royale where James Bond gets into a particularly ugly fight with an enemy agent. The two brutally beat each other, all within eyesight of love-interest Vesper Lynd. Bond ultimately kills his assailant. But instead of moving on with the overt plot, Bond then has to tend to Lynd, a woman unused to death and violence, who saw him as charming but now knows what he is capable of. The moment ends with her in a shower, trying to cleanse herself of those violent memories and Bond sitting on the shower floor by her side. 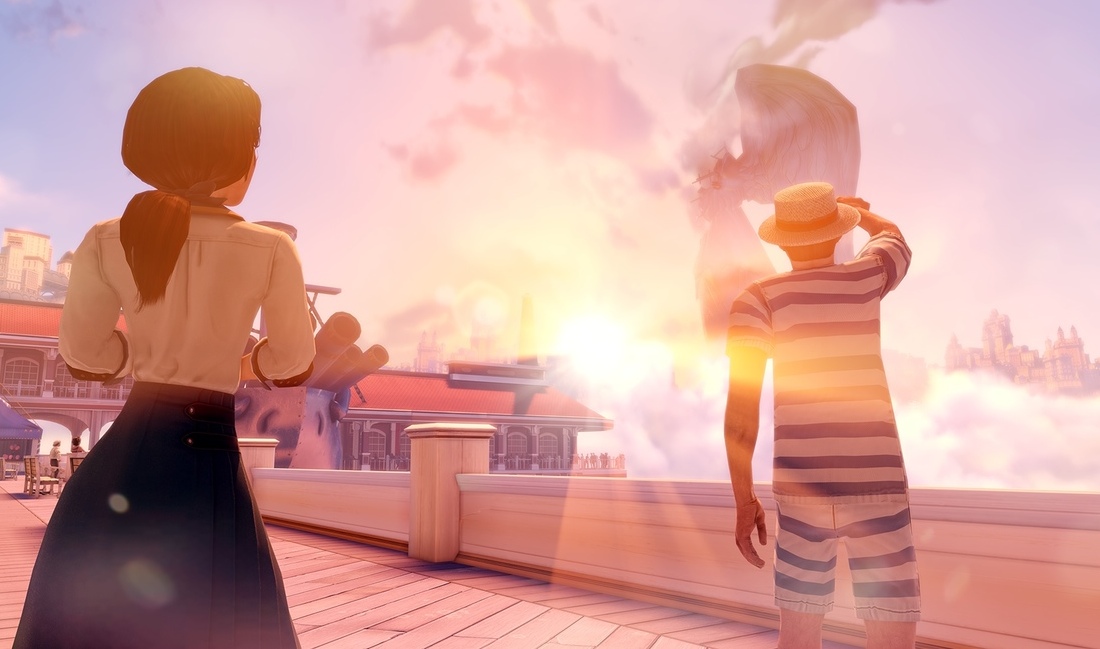 "Do you know how many times people wanted to just cut her? Over and over again. Because we didn't know what to do with her at first."

Elizabeth isn't Bioshock Infinite's damsel in distress or some animated end goal for the game, she is a complicated, powerful character who helps color DeWit'ts view of the floating city of Columbia, improves his odds at survival and sparks powerful emotional moments in the game.

Levine said that as they worked to make her more believable, and more curious about the world around her, keeping her in the game became a growing problem because she started to get in the way.

"I would be in reviews and ask ‘Where is Elizabeth?' and they would say, 'Oh, she's in a closet,'" Levine said. "The same with (BioShock's) Big Daddy. I actually had to insist that there were three Big Daddies in every level."

The problem in both games, Levine said, was that the atypical characters confused some designers.

"Nobody knew how they worked or what to do with them," he said.

It's a powerful moment in the movie, and an unusual one. But it addresses the unasked question: How can Bond be so charming and so brutal?

"I thought that was one of the best action scenes in a movie because it dealt with the fact that, yes, he is this killer, he's doing it for a meaningful reason, but they actually have it resonate on somebody," Levine said. "And it's a very difficult thing to pull off, I think. And as over the top as James Bond is, even in a movie that's relatively realistic to other James Bond movies like Casino Royale, like relatively realistic. It's completely absurd that someone could take that kind of damage, have that kind of physical stamina. If you've ever been in a fight you know it's exhausting like in two minutes you just want to fall on the ground and die. But to bring that sort of realism, into such a fantastical movie.

"The further you go, the more you have to do."

"[Uncharted's] Nathan Drake is a charming, lovable rogue, but he's also a psychopathic mass murder, so's Booker DeWitt, though DeWitt's not really meant to be charming. So we had this conversation (between Elizabeth and DeWitt) to address that."

And it's not just the conversation, the developers designed an entire system to track Elizabeth's emotional state and how she feels about DeWitt throughout the course of the game.

"We have all of these systems that after you are in combat and you ask her to, like pick a lock or something she wouldn't be like, ‘OK, Booker.' She actually cools. Her emotions cool down over time because you have a lot of dissonant moments.

"It's all about begging the question. The further you go, the more you have to do. If she was a robot you'd never have to worry about that."