The Mindful XP Volume is an experiment in creating meaningful games

Share All sharing options for: The Mindful XP Volume is an experiment in creating meaningful games

The idea was to develop meaningful games over the course of one semester. Mindful XP began as the collective effort of Felix Park, Dan Lin and Michael Lee, three students from Carnegie Mellon University's Entertainment Technology Center who worked together during their Spring semester at the school to complete 10 standalone games that would be as mechanically and stylistically diverse as they could make them. The idea, they say, was to use games as a medium for communication; to portray meaning through specific attributes that can only be found there.

"we were striving to communicate some sort of meaning through our games..."

After four months of development this is the end result: The Mindful XP Volume, a collection of eight of the 10 games worked on throughout their semester. The team opted to adopt a tapas-style format for presenting their games, each of which is a short, bite-sized title. One is focused on a person's attempt to maintain relationships during a lifetime; Another looks at the experience of coming to terms with the state of those relationship. Others are more abstract, using a traditional puzzle game format to express the complications of becoming close to someone. All games are playable on their website here.

And while the men of Mindful never intentionally designed the collection to be connected in any real sense, a familiar thread happened to appear during development, tying the titles together. According to Michael Lee, it was an accidental but natural part of the development process.

"We tried to convey meaning specifically using the medium's unique strengths of mechanics, interactions and systems..."

"What organically ended up happening," explained Lee, "was each game became a sort of response to the previous one as we tried to explore different subjects."

"In our case, we were striving to communicate some sort of meaning through our games, whether that meaning might be a specific experience and designed for the player to discover, or something more generalized that a player could interpret through their own personal lens. We tried to convey meaning specifically using the medium's unique strengths of mechanics, interactions and systems, but we still felt that providing context through aspects like narrative or visuals was pretty necessary for almost all of the things we were trying to communicate." 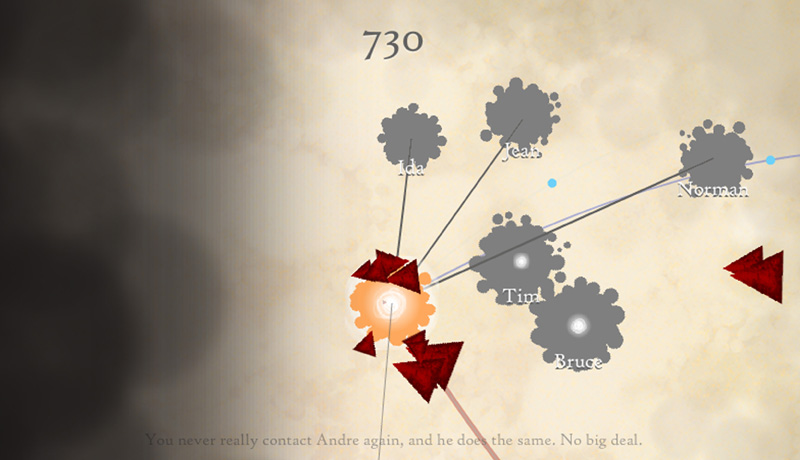 The process behind deciding what they would initially focus their efforts on during development was precarious, however. Initially, the team thought of different messages and mechanics they could explore before the semester began, going down this list in an early attempt to try and create games that fit these pre-planned themes.

"But we quickly discovered that just choosing a mechanic or message didn't make sense, our ideas would try to shoehorn in the meaning in inorganic ways."

"Of course there are any number of different ways games can communicate..."

Games place the player in a particular situation that, through the mechanics and systems that drive the titles, constrains the user, says Lee. It's through these constraints, he explains, that a creator can transmit a message about that situation and its context engagingly, even in more free-form or open world games.

"That's one way," he says, describing how a designer could feasibly insert meaning into the medium of a game. "But of course there are any number of different ways games can communicate: their stories, their visuals, or even the people you play with. However, this is all highly skewed towards creating more works that definitely try to convey authorial intent, which can be pretty controversial when it comes to games."

To make meaning appear more organic in the game, the three shifted towards making decisions based around issues, experiences and thoughts they were passionate about at that moment. They used that initial passion to help push forward rapid development, but even then spent countless hours staring at blank whiteboards trying to think of great ideas.

"we wanted a message that struck a sliver of truth for people and created a moment of introspection and personal reflection..."

"One difficulty we encountered throughout our project was creating a game that was personally satisfying for each of us," he says. "With each game we had a particular meaning, but during development we would often encounter a point where we felt that meaning was not being properly communicated. We would spend many hours revamping, refining, and often scrapping mechanics that we felt didn't work. In addition we wanted to make sure that the message we were communicating wasn't a shallow or overly-simplistic message, we wanted a message that struck a sliver of truth for people and created a moment of introspection and personal reflection."

Another difficulty they were forced to overcome was balancing meaning with engagement. The team wanted to create games people could play and understand while still being true to the message that we were trying to convey. It was easy to swing too far in one direction or another and they battled with this the entire semester.

By the end of the four-month semester, the eight-game volume was complete and featured entries with development times ranging from just over a single day to just over three weeks. The Mindful XP Volume was revealed as one of the eight winners of the Student Showcase winners for the 2013 Independent Games Festival. The title will be playable on the show floor at this year's GDC in San Francisco starting March 25.