It may be April Fools' Day, but Far Cry 3: Blood Dragon appears to be a real extension of Far Cry 3 on the way from Ubisoft, if the teaser trailer above is to be believed.

The trailer is pitched as a VHS tape while the video itself features an '80s sci-fi aesthetic, and a wacky '80s teaser site pitches Blood Dragon as a fake Far Cry movie from that era. "The year is 2007. It is the future," reads the film's tagline; according to the synopsis that appears on the site, it tells the story of cyborg soldier Sgt. Rex Power Colt, a "Mark IV Cyber Commando" who has been sent to retrieve a bioweapon from a tropical island after a nuclear war destroys civilization as we know it.

Although the teaser site suggests Blood Dragon is merely an April Fools' joke, it seems to be a real thing. Word of Blood Dragon first leaked earlier this year — in January, the Brazilian classification board listed it for release on Windows PC, PlayStation 3 and Xbox 360. And last month, Far Cry 3 lead writer Jeffrey Yohalem teased upcoming content to Joystiq, saying, "I'm working on something now that will be surprising, I think, when it's announced."

Clicking the "buy" button in the website's fake shop under "The game for your home entertainment system" brings up an image of a list of Xbox Live Achievements, including ones that reference VHS tapes and killing dragons. And Xbox Live Arcade artwork for Blood Dragon was found by NeoGAF users on the Xbox website.

We've reached out to Ubisoft for more details. In the meantime, you can scrutinize the still image we captured from the teaser trailer. Check it out below. 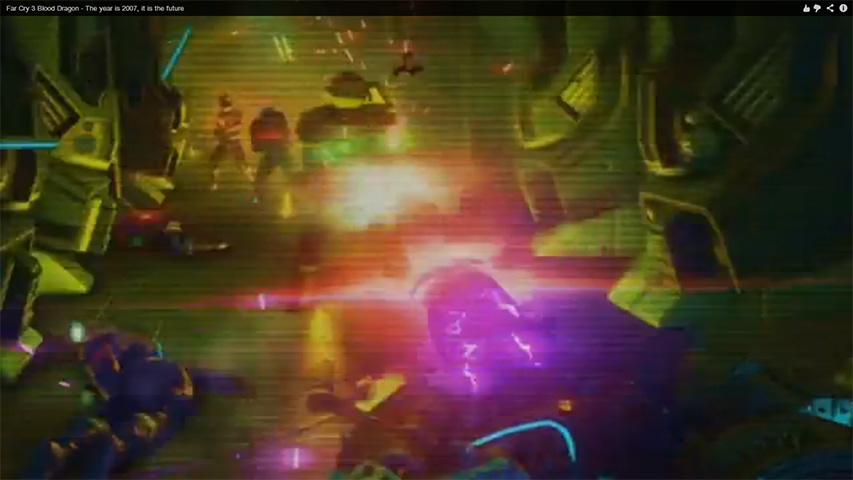