Volition, Inc. is having a strange year.

Last December publisher THQ, which acquired Volition in 2000, filed for bankruptcy. By January, the publisher was being sold piecemeal, franchise by franchise, developer by developer.

With an unannounced game far in development, Volition found itself suddenly under new management, having been purchased at auction for the surprisingly cut-rate price of $22.3 million by German entertainment group Koch Media. Volition is its first internal video game studio.

Just two months later, Volition and Koch (publishing games under the brand Deep Silver) announced Saints Row 4. We talked with senior producer Jim Boone and design director Scott Phillips about trying to make a game while your publisher implodes, the trauma (or lack thereof) of changing corporate horses midstream and what exactly the team has in store for a current-gen title in a next-gen year.

Located over two hours from Chicago in the unlikely town of Champaign, Volition can’t even claim that one-time midwestern game development center as its home. Instead, far from industry development hotspots like San Francisco or Los Angeles, Volition has become known for its consistent, workmanlike output. After a short stint as an independent company before the THQ acquisition, the now 16-year-old development studio has made a name for itself with series like Red Faction, Summoner and Saints Row.

In 2011, with THQ publicly struggling, the studio shipped Red Faction Armageddon, a disappointing follow-up to the promising but flawed Red Faction Guerrilla that abandoned its predecessor’s open-world anarchy for a scripted, subterranean action title. Four months later, it shipped Saints Row: The Third, an unapologetically crude game that recaptured the open-world anarchy of Guerrilla while delivering the critical hit the studio had been waiting for. Things were looking up for Volition and THQ. 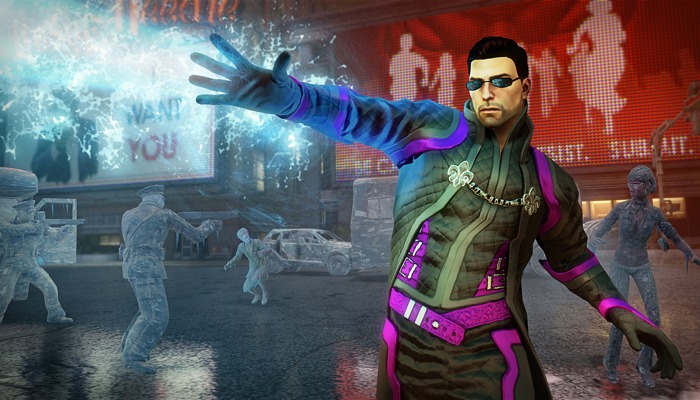 Unfortunately, the very same day that Saints Row: The Third was surprising players, THQ shipped the Xbox 360 and PlayStation 3 versions of its uDraw GameTablet, the failure of which resulted in 1.4 million unsold units and a revenue shortfall of $100 million.

"The same month we shipped [Saints Row: The Third], we were feeling really good," design director Scott Phillips told Polygon. "Reviews are looking good, pre-orders and all that. It’s selling like crazy."

But within a week or two uDraw managed to lose $100 million, undoing much of Saint's Row's financial success and leading the company to one of its gravest financial stumbles. "No matter what we do, I'll be perfectly honest," Phillips said, "it felt like we would have some success but then that would be completely overshadowed by numerous failures from the company."

Red Faction isn’t in Volition’s future, though; Koch only purchased the developer and the rights to the Saints Row franchise, not Red Faction. When asked if the team had any desire to make another Red Faction or pursue the license, Boone said, "We love making games, right? But at the end of the day, we also realize it’s a business.

Phillips added, "I can tell you there are more people [at Volition] that want to make FreeSpace," referring to the studio’s pre-THQ space combat series. "Every company meeting there is a question about, ‘Will there be another FreeSpace game?’"

If there is, it will have to conform to the studio’s new goals: "The player is an agent of mayhem" and "We make open world games that are connected experiences."

Those goals are certainly embodied within Saints Row 4, which has added enough strange new elements that it’s hard to imagine where Volition will go from here. Superpowers, ala Infamous? Check. Aliens from outer space? Check. Oh, you’re also the President of the United States? Check.

"I read all the reviews that were done for Saint's Row 3 and they wondered if we could do anything more over-the-top than this," Boone said. "So I suppose it’s a challenge coming from that standpoint of can we do something crazier? Our tendency is to do stuff that is still fun ultimately.

"Sometimes you can come up with ideas that are over the top but I don't know if that's going to be fun. So we're not trying to do it for the sake of being over the top. We're adding superpowers not just so we can say that you've got superpowers in Saints Row, that's crazy. It helps a couple of our key mechanics, navigation and combat. Those are the two most normal things you do in a Saints Row game and now they're totally different by adding superpowers.

In addition to improving locomotion and combat (thanks, superpowers!) the team also targeted mission structure as a key area to improve. In Saints Row: The Third, players used an in-game cell phone to retrieve missions, but that system often felt disconnected from the game’s narrative, we were told. 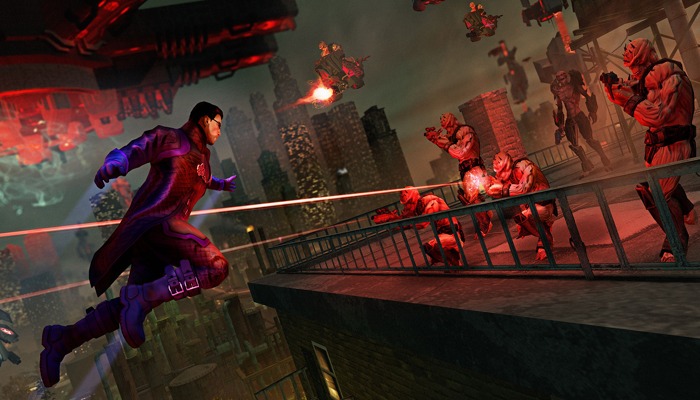 "We had everything laid out in structures and it all flowed together in a big chart that we had but then when you actually play the game it doesn’t really flow that way," Phillips said. "And, so in Saints Row 4 we changed to more of a quest log structure and you tell what’s next, the missions are more organized.

"It's just a better structure to pull people through the game."

And, to be clear, Volition wasn’t looking to reinvent the series technologically. "We’d heard all the rumors about when next-gen [consoles] were coming out," Boone said. "And our thinking was, just psychologically for gamers, they’re going to see next-gen and even though they intellectually understand it’s a totally different platform they still, in their hearts, think, ‘Oh my God the graphics in that game are amazing.’

"And then everything this current gen is just diminished by comparison. So our concern was if we spent a bunch of time getting [Saints Row 4] to look even better then no one even notices because they're busy looking at all this stuff on next-gen.

"We definitely did some things to improve it and work on tools, but nothing dramatic. Most of our time was spent getting these mechanics in and getting them polished and doing all that work."

As far as timing, this will also be the closest that the series has come to a Grand Theft Auto release, just four weeks before September's Grand Theft Auto 5. While the original was accused of being a GTA clone, its 2006 release predated the first current-gen GTA 4 release by more than a year-and-a-half. Since then, the Saints Row series has carved itself a niche while the "open-world" genre has expanded well beyond the urban crime simulators of the past.

"I feel like […] we've gotten to the point where there's so much variety within the open-world genre," Boone said. "There’s so much variety now, with games like Assassin’s Creed and Red Dead. And we’re quite different than GTA now, so in many ways I just look at it like, ‘Holy shit, there’s this big game that’s going to come out and it'll probably sell a lot of units’ but I’m not worried about being just like them." 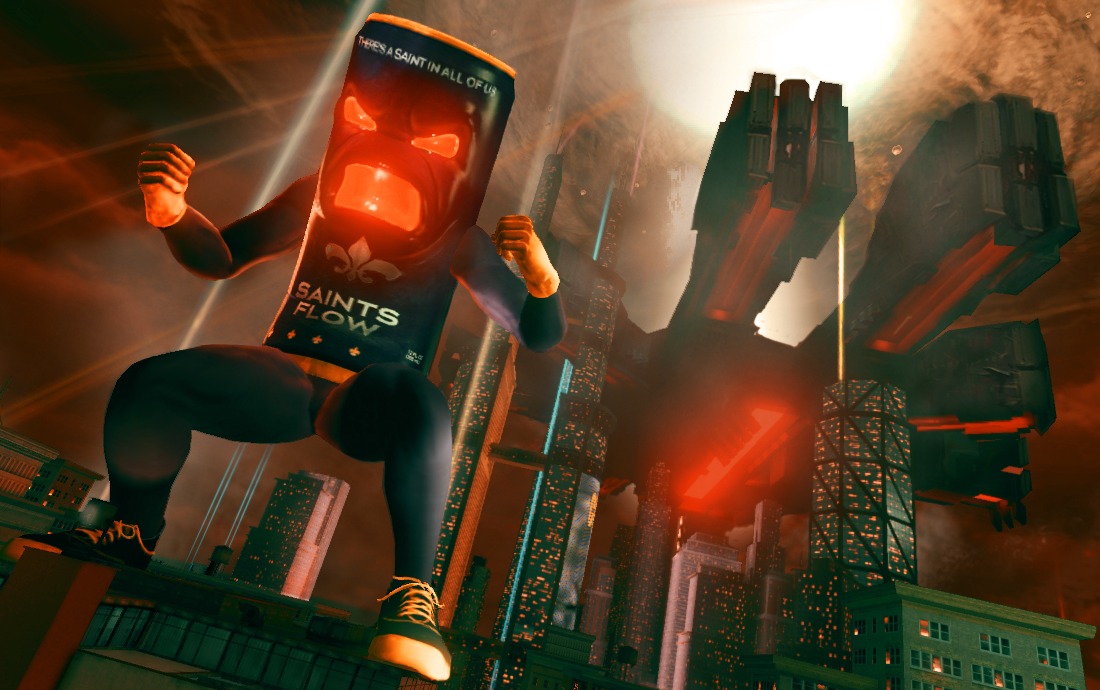 "At Volition, we’re not the biggest company in the world," Boone said. "We had a number of people working on the expansion pack while we’re also trying to get this full game moving along.

"We’ve got to go back and retrofit stuff and get it to a shippable state," but it will live on.

During the auction process, the team at Volition had to receive potential bidders at its Champaign offices, giving the competition a thorough, unrestricted tour of its facilities, its technology and its projects. Including the still-unannounced Saints Row 4.

"They're all our competitors. So, it's like ... it's strange. One of the ways we reconciled it — at least selfishly for Saints Row 4 — is that we knew that, in the not-too-distant future, we were going to be announcing the game.

Out of the six or seven would-be bidders who passed through the office, Boone remembers the visit from Koch being notable. 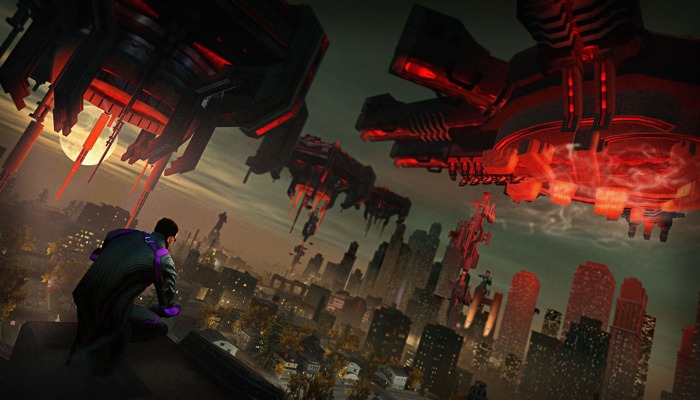 "I will admit this at first they were just listed as Koch Media, so my first reaction was who the hell is Koch Media?" Boone said, laughing. "I don’t know who they are and we had to look it up. And I see Deep Silver. Oh, OK. I know Deep Silver.

"So [the CEO] came in. He only spent half a day and that was his schedule. The norm was a full day and for some people it was actually a couple of days. So, we were like, ‘Half a day, that’s odd.’

"But the reason why is that Deep Silver did our European distribution in Spain and Italy, I think it was. So he was already familiar with Saints Row 4 because we had already been communicating through our sales group. So once we found out, half a day made more sense."

The studio had a few employee pools to guess who the winning bidder would be — "we’re human just like anyone else," Boone said — but they didn’t find out until just before the rest of the world did.

"The studio directors found out about half an hour before everyone else found out. Our [general manager] Dan Cermak was in Delaware" at the bankruptcy court, Boone said. "Otherwise we were all just glued to our monitors looking at the Twitter feeds."

And under new ownership, has anything changed for the game developers in Champaign, Illinois? "For the average person at Volition, they wouldn't even have noticed the difference, other than the paychecks," Boone said.

With four months left in development, the team at Volition keeps on working — through the merger of two projects into one based on the feedback from a new corporate president; the dissolution of its parent company; the admission into an entirely new company — all at a breakneck pace to get in stores before next-gen consoles do, and give players something that may not have next-gen looks, but it has years of lessons learned from this long, challenging generation.

Like the players in its games, Volition lives in an unpredictable world, where the ability to navigate mayhem can make the difference between life and death. Oh, and superpowers help.