Payday 2 is fantasy fulfillment for the criminally inclined

Share All sharing options for: Payday 2 is fantasy fulfillment for the criminally inclined

Bank robbery in Payday 2 is more than just a job, it's a career.

Payday 2's heist job, "The Shipment," opens in the back of a refrigerated van packed with frozen meat, cocaine and a pair of ice cold killers. The perspective — and the ensuing violence — will look familiar to regular viewers of AMC's Breaking Bad. Even knowing what's on the other side of those van doors, the two players open up the rear of the vehicle, triggering a hail of gunfire from the cops.

The van catches fire, but they manage to escape and now have the unenviable task of removing hundreds of pounds of cocaine in duffel bags from the back of a burning meat truck — while still being shot at by police.

Shit had already gone wrong in a previous demonstration of Payday 2's heists. In a recent hands-off preview of Overkill Software's sequel, I watched as a pair of masked robbers raided a jewelry store. The first attempt was a success, with the duo sneaking into the small shop from a back window after taking down a pair of security guards. They'd tied up the staff, closed a security shutter to prevent being fired upon by police and successfully drilled through the store's safe, making off with their bounty.

In a second, more brazen attempt at that robbery — a heist known as "The Ukrainian Job" in the game's network of contracts — the two entered from the front, masks on, waltzing right through a metal detector. This time, things went quickly, horribly south. Civilians were killed. A SWAT team swarmed the building, pouring in from the front and the rear. While trying to manage the police response, take out security cameras, snatch whatever jewelry they could and monitor the progress of the safe drill, the cops overwhelmed them. Both were killed within minutes. 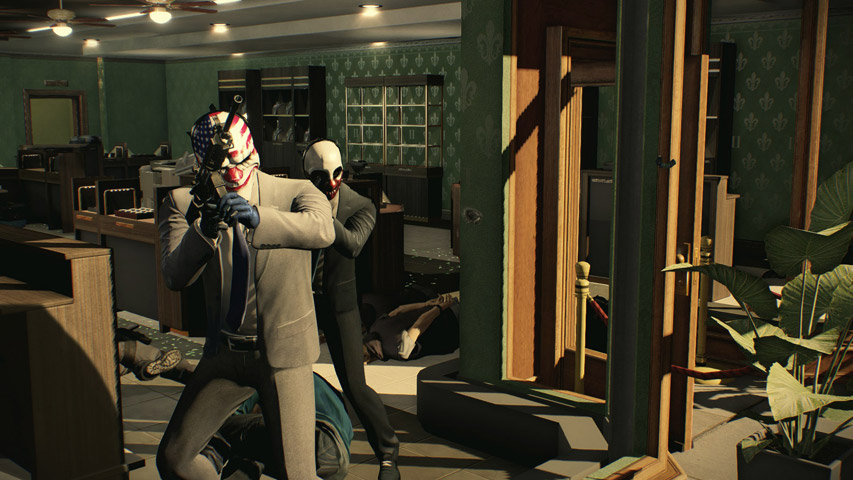 "The Ukrainian Job" was one of Payday 2's smaller, bite-sized contracts. Players can get in and get out within minutes instead of dedicating an hour or more. It's also a job that could be pulled off stealthily, one of the new components of Payday 2. Not every mission need end in a firefight with the cops.

Stealth is a huge component of Payday 2, says designer David Goldfarb, who left developer DICE and the Battlefield series behind last year to join Overkill. Sneaking, rather than engaging, is at least a viable option for players, who can now specialize in one of four career paths, each with their own associated upgradeable skills.

"We want people to make choices," Goldfarb told Polygon in an interview. "A job can be hard or it can be easy. A lot of it is about player choice, and facilitating those choices with skills and devices."

Goldfarb said he's been wanting to make a bank robbery game for more than 15 years and after the big budget, high emotional commitment of making games like Battlefield 3, he wanted something smaller, more manageable. He wanted to explore the fantasy of being a career criminal.

"There was something about the journey of being low-end and going to the high end in bank robbery that interested me," Goldfarb explained. "The complexity of the heist — it interested me from a mechanics point of view because there's so much happening at once."

The original Payday: The Heist, released in 2011 for Windows PC and PlayStation 3, was lacking in some of the choice and complexity its sequel should provide, Goldfarb said. It showed a lot of promise, but routinely devolved into a horde shooter. "Which is entertaining," he said, "but also very repetitive."

"This is a co-op game first and foremost"

With Payday 2, players will be "more able to participate in the fantasy of being a successful criminal," according to Goldfarb. Players will be able to see their characters grow and change with unlockable skills that increase their technical proficiencies, let them carry more weight or simply become faster, more dextrous and deadlier. The game's Ghost character class, a specialist in stealth, can add new lock picking skills, safecracking and the ability to survive greater falls, for example, favoring escape instead of confrontation.

A loot drop system is designed to hook players on finding new weapons, new accessories, new gear and, perhaps most coveted, rare masks that can be donned before jobs. Players will unlock new colors and types of masks upon completing missions. In rare cases, successful missions will drop special masks, like a rare all-black face mask or the ultimate in headwear: the Dillinger death mask, said to be a one-in-a-million drop.

Overkill is doling out in-game heists through a network called Crimenet, a map of robbery jobs provided by contractors. Players can scan that network for jobs that fit what they're looking to do on any given day. While some of those heists may be on the smaller scale, others will consists of a series of jobs and multistage tasks that may span three to five days. They'll include set up jobs, surveillance runs, robberies and escapes. They'll branch and certain aspects of those job components will be randomized. Goldfarb says things like metal detectors or a wandering civilian or security guard "will fuck up what [experienced players] think is safe."

Contracts will include than just snatching money, drugs and jewelry in Payday 2. Players may find themselves breaking into police evidence lockers to recover security tapes that incriminate them. They may have to extract a dancer from a strip club. They may find themselves in the role of cat burglar, pulling of short burst robberies and never firing a single round.

At the end of successful jobs, players will be treated to certain rewards: cash, loot drops and live action cinematics. During our preview demo, a scene inside a dance club played out; it was clearly a night of drunken debauchery and lavish spending.

"We're kind of trying to service the fantasy a bit," Goldfarb said of the scenes. "What would you be doing after you just pulled off this heist?"

The cash that players accrue through jobs will have a purpose in Payday 2, producers said. In The Heist, money was your high score, but in the sequel, it will be used to upgrade your character, your weapons and more. It can be used to purchase intelligence before a mission, like access codes or a napkin sketch of jewelry store and the location of a certain tiara.

Payday 2's designers say they're drawing inspiration for the game's missions from fantasy and reality. Jobs based on The Dark Knight's opening scene, for example, and the iconic, gunfire-fueled bank robbery from Michael Mann's Heat will be featured alongside a mission inspired by the 1978 Lufthansa heist.

"We are trying to make homages in missions," Goldfarb said. "Not all of them, because some won't make good missions, but that is part of the franchise and the bank robbery thing ... it's so mythic."

Goldfarb said he wanted to recreate another Breaking Bad moment, involving a magnet and evidence room from the series' fifth season opener, but that heist isn't going to make it into the game. It may find its way in eventually, given the planned downloadable content coming to Payday 2.

At this stage, with still more to be revealed about Payday 2, Overkill's sequel, with its deep loot drop system and robust play progression, is looking far more ambitious than Payday: The Heist, but also more approachable, thanks to its smaller bites of content and varied approaches to successfully completing missions. We'll find out soon if Overkill can pull off the job.

Payday 2 is planned for release this summer on Xbox Live Arcade, Windows PC through Steam, and PlayStation Network for PS3.

What we know about Superman: Legacy