Brothers: A Tale of Two Sons tells a love story through simple gameplay

Share All sharing options for: Brothers: A Tale of Two Sons tells a love story through simple gameplay

Brothers: A Tale of Two Sons boils gameplay down to basic actions of running and carrying, climbing and grasping, simplifying input so players will focus on the story and pay more attention to their surroundings.

"Everything is made to make that immersion possible," director Josef Fares told Polygon. "We took away all the 'gamey' stuff like text and difficulty levels. It's not like one brother shoots fire and one shoots ice, it's not about that. It's not about what weapon you will have."

Fares, a film director venturing into game development for the first time with Brothers, described the title as more of a "storybook experience" than a game. While he stressed the importance of keeping up the short game's pacing, he said the team was careful to take gameplay "down to a level that felt fun and comfortable."

"It's not a puzzle game, it's not about challenging you, and you won't get stuck," he said. "Everything is there to be experienced."

Brothers is set in a rural fantasy world inspired by the Scandinavian countryside, where people speak a charmingly garbled language based on Fares' native Lebanese. Assets and puzzles in the game are never re-used between areas, Fares said. Fares wanted players to feel like they were moving through a storybook brought to life.

"It was very, very important that we keep everything unique," he said. "You won't see the exact same tree or rock. It's like when you open a book. You don't want to keep opening to the same page every time you open it. You want something different."

Brothers — due on PSN, XBLA and Steam later this spring — tells the tale of two young boys on a quest to find a cure for their ailing father. Fares are not sharing more details, as "anything beyond that is a spoiler." The story's themes of brotherhood and bravery in the face of high-risk stakes were inspired by Pippi Longstocking creator Astrid Lindgren's novel The Brother's Lionheart, which tells a dark story about two brothers adventuring with a resistance group struggling to take down an evil entity. 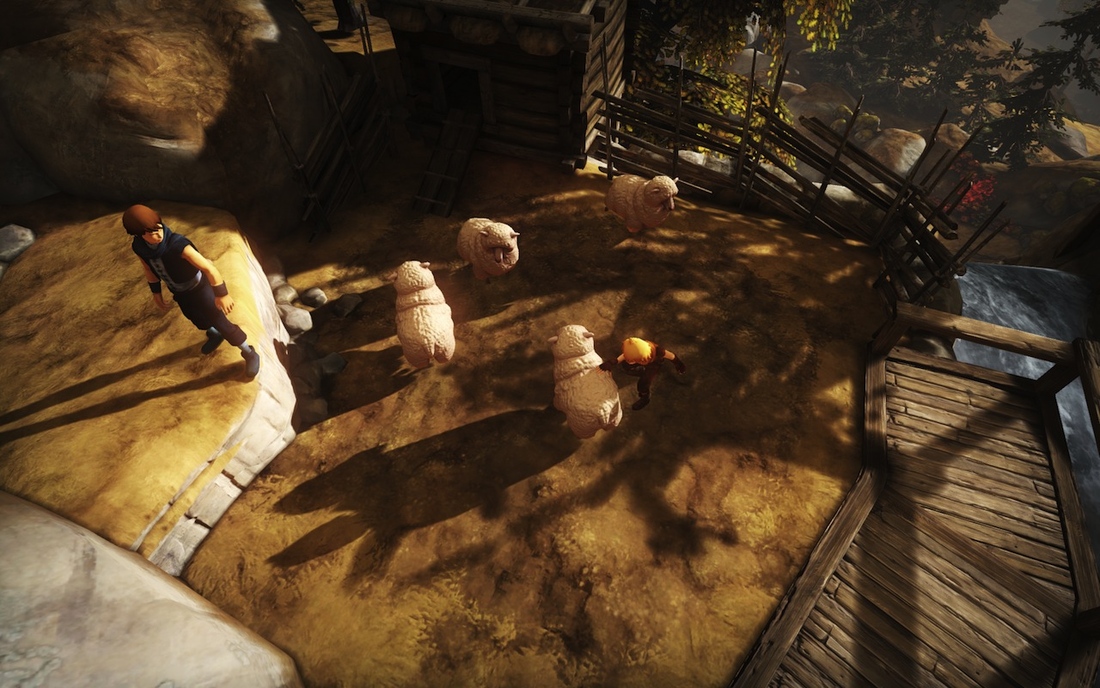 Puzzles and obstacles are simple. The elder brother can be used to boost the younger one up ledges so he can throw down ropes, or one can be used to pull and hold levers to allow the other to move through heavy doors. These challenges are simple and occur close together, keeping players constantly moving but never constructing a situation in which one feels stuck. Players will move through areas fluidly without having to spend long searching for a puzzle's answer, allowing them to spend some time exploring or just admiring the beautifully crafted environments.

The game feels like playing multiplayer with only a single player. Both brothers are controlled simultaneously; the left analogue stick and trigger are used to control the elder brother, while the younger is controlled by the stick and trigger on the right. The face buttons are not used, and while you can use the bumpers to shift the camera view, it will automatically align itself to have the big brother on the left side of the screen in order to keep players from confusing the controls. These controls are easy to master and become comfortable quickly, making digging into puzzles a breeze very early on in the game.

"The idea is that you will feel that your left hand is big brother and the right hand is little brother," he said, adding that the story wouldn't work if there were two separate players controlling individual brothers. "If you add multiplayer it takes away from the experience of the game."

As Fares noted, there is no "gamey" text or directions outside of a brief tutorial for controls at the beginning. There is no dialogue either, leaving players to parse out where to go next based on jibberish interactions with NPCs and what they find as they explore. 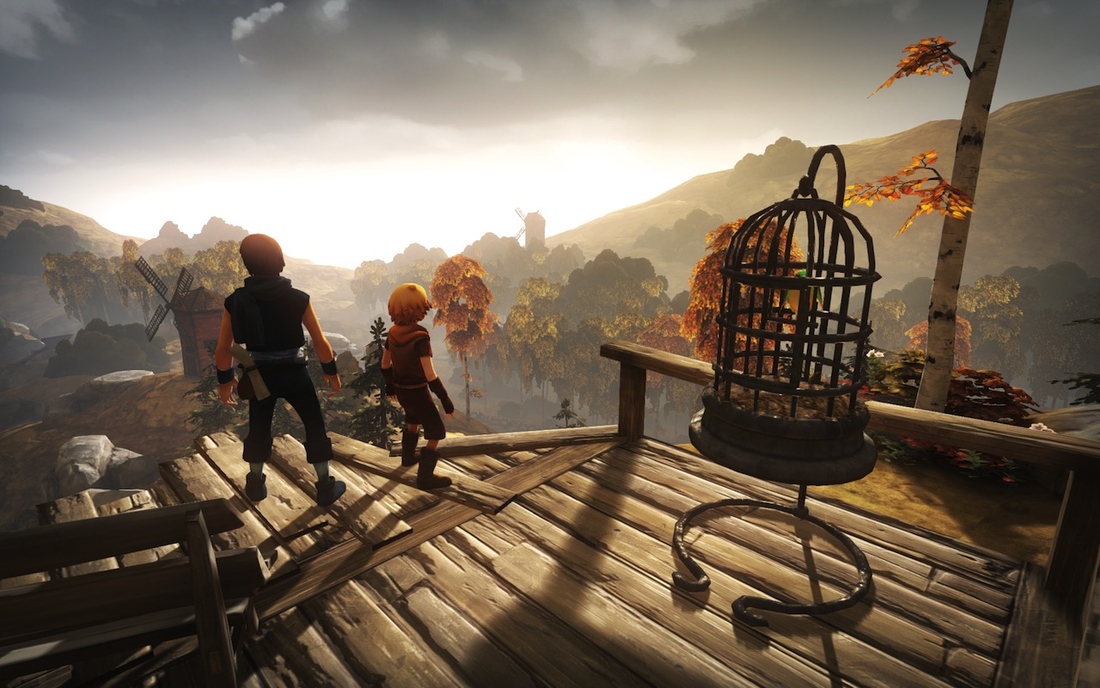 While short mildly-challenging puzzles make up the meat of Brothers' gameplay, there are no fetch quests or missions that require multiple stops or backtracking. The goal is to move players smoothly forward through the story, allowing them to interpret each "happening," as Fares calls the puzzles, in their own way.

One of the "happenings" involves helping a white rabbit fit in with a group of black rabbits. Players can dip the white rabbit into the ashes of a nearby fire pit to dye him black, causing the black rabbits to accept them. More brief puzzles are similar to this one, such as freeing a bird from a cage so he can join another bird. Fares says that the results of these interactions, like the main storyline, are ultimately about love.

"You are essentially creating your own love stories," Fares said.

Fares compared the game to Journey, developer thatgamecompany's equally silent and experience-driven indie title. Both feature wide, sweeping landscapes and silent protagonists on a dire quest. Brothers is also short, around three to four hours long depending on the time players' spend stopping to smell the roses.

"A game needs to be as long as it needs to be," Fares explained when asked about the short run time. "Many people talk about short games being bad and that's quite insane for me. I feel many games are too long. I think consumers are used to the idea that games are supposed to be long. You never question a movie in the same sense. You talk about the experience, that is the important part. If the game is 10 hours and good and solid, then fine. But it rarely is, to be honest." 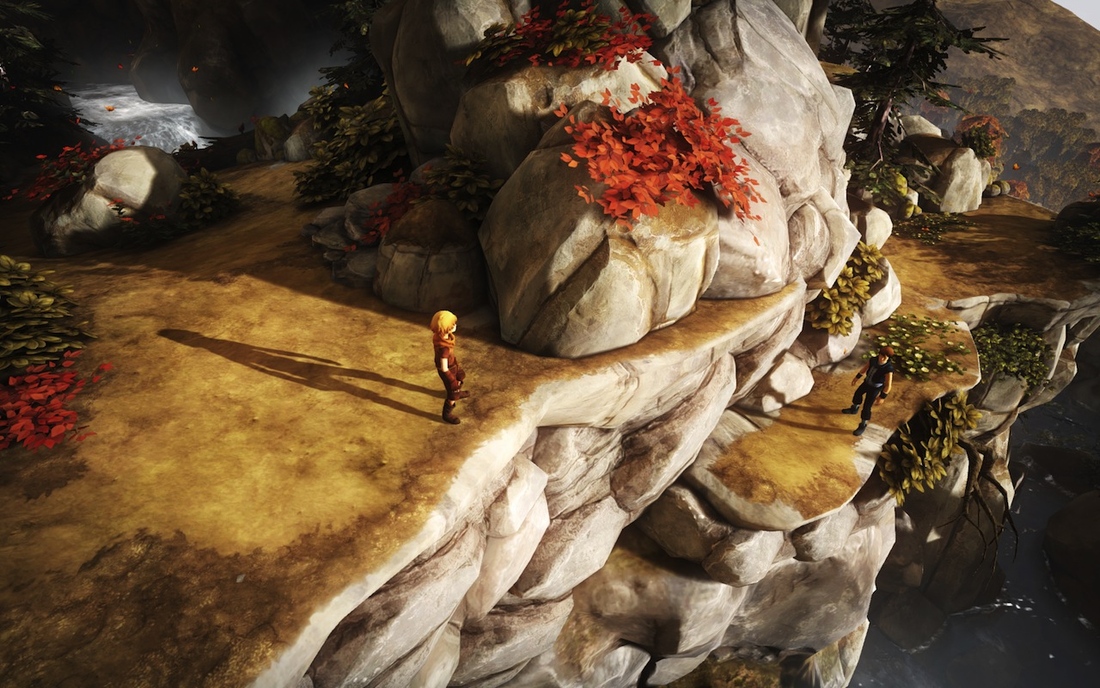 Fares added that Brothers could not have been a 10-hour game because stretching the story out would water down its meaning and potency. As an emotionally-driven game, Brothers is meant to be a one-sitting experience that will leave a lot of players with questions after its ending, he said. Players also may not see every piece of content in one playthrough, encouraging them to go back and play again to fill in the missing pieces.

"In the game industry, people want to cry," Fares said of creating emotionally-driven games that seek to express more than the sum of their mechanics. "But being touched is not only crying. I think games are art, and in the near future they will end up more touchy than films because in games you have interactivity. We're aiming to do that with Brothers."