Opinion: Journey succeeds because it affirms our existence

Share All sharing options for: Opinion: Journey succeeds because it affirms our existence

I read a Carl Jung quote on loneliness recently that corrects a kind of misconception about what it means to be lonely: He says, and I'm paraphrasing here, that loneliness does not come from the absence of people around you, but from the inability to communicate that which is most important to you. Loneliness is the feeling of not being known.

One of the neat things that Journey does is flatten that distance. It reduces your existence to a very constrained set of movements and gives you a single totally unambiguous channel with which to communicate. You become a human heart stripped of its pretense. And then Journey lets you be unambiguously known to another such heart.

This is at best clever and at worst a kind of parlor trick. If it had stopped there it might almost tip into the offensive. But it didn't.

Loneliness is the feeling of not being known

I deliberately knew little going into the game. Only that 1) one friend said he'd cried, 2) another said he'd stared at the screen for fifteen minutes after completing it and 3) there would be something about a bell, another player who was anonymous and something about the hero's journey. And a lot of sand.

I cried three times. The first time was when the second player appears sitting in the circle with you for the first time. I'd been alone in those circles and admiring the simplicity of the kindergarten-like way the character folded itself up to listen to the mystic in the storytelling bits, and when the second player appeared there I had this overwhelming feeling of undergoing a rite of passage with another person. And then they got up and ran down the hall and chirped and I chirped and I felt very known and I cried. It was the first time I had been in close proximity to the other player after being mostly far away from them in the other parts.

I felt very known and I cried

The second time was almost certainly completely unintentional. It was in that big vault of shadow, maybe the second sequence after things begin to get dark. I couldn't find the other player. This was because they weren't moving. They were sitting down in the sand, I think. I could light up their scarf but they wouldn't get up. And then they melted into the sand. I thought don't go and I started crying. In retrospect I think what happened was a network error or maybe they quit, but it certainly felt perfectly timed and could not have hit me at a bleaker moment. I can't remember feeling so alone in my adult life.

Both of these were quick, the kind of flash of emotion you might get at the end of a good romantic comedy, and I thought, okay, game, you got me. It actually isn't the first time a video game has made me cry, not even the second or third. Fair enough. But then I got to the actual end of the game and completely inexplicably lost all my shit and cried not just for a moment or two but for several minutes. And then I stared into space for a while and sent my reaction to friend #1 in the form of a one line email. I sat quietly for an hour almost totally mystified about what had actually just happened while simultaneously afraid of losing it, whatever it was. 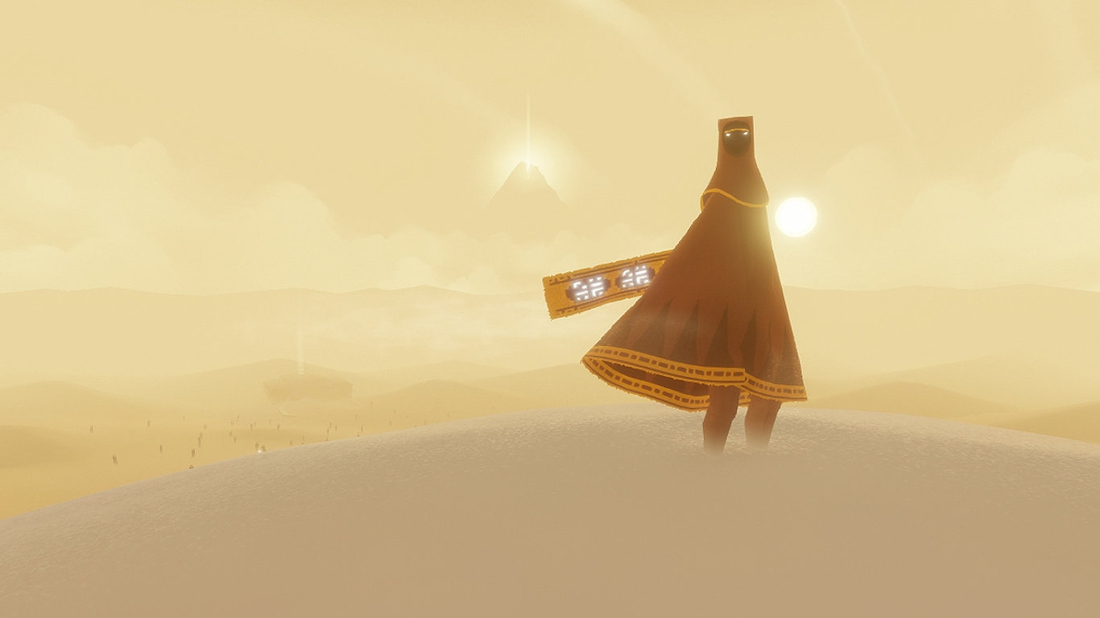 Eventually I Googled around a bit, because I also wondered how in the hell anyone had managed to review the game. How they dared even try. And I found the bit about the monomyth, the hero's journey, which the game does capture without words, which is impressive but again possibly one of the least interesting things that it does. There is also a lot of raw beauty, which people comment on, but again that is far from being the game's heart.

It might be the most beautiful thing I've ever seen, not just a game or even a movie or a book but a thing. I can recall no film that I've reacted to so strongly — maybe one or two novels (both fantasy), and Bury My Heart at Wounded Knee.

Bury My Heart is a story of human behavior at its absolute worst, its darkest — almost a work of nihilism for that reason, or it would be if it weren't so faithful to the memory of the people whose loss it chronicles. It is a work of bearing witness.

It might be the most beautiful thing I've ever seen

It seems to touch on a similar feeling because there is something powerful going on in Journey about extinction, about ancestors, about ghosts. It is a game full of ghosts, and it ultimately turns that second player into a ghost even while they are there with you being known.

The red banners reminded me immediately of Chinese joss paper, the money sacrifices burned in ancestor worship. It's odd because visually the banners look more like good luck papers (the vivid red), but I think the fact that they kind of flew toward you and then burned up suggested ghost money. And then there is the fact that you start the game in the desert surrounded by what appear to be memorial stones of some kind, the suggestion of a graveyard. The absence of one's people is all around, and then the story that you are reflecting on is a story of fallen empire, of hubris, of cataclysm. The story of every human civilization.

The absence of one's people is all around

In selecting that progression they connected the simple loneliness and being known to the monomyth, yes, but more meaningfully to the core of what it means to be human: to explore and to play even in the face of certain annihilation. And the beauty of the environment is unflinching, total; but even in the face of that beauty, the thing you look for always is the other player, even though you don't need them, even though they might be irritating.

So what we value, without anything so crass as an extrinsic marker, is that human connection, the more so in the face of death. We are alive in a world of ghosts and dust. For a moment you are known, and then the moment is gone.

Erin Hoffman is a game designer and novelist living in the San Francisco Bay Area. Shield of Sea and Space, completing her Chaos Knight trilogy, ships from Pyr Books in May 2013. For more information, visit www.erinhoffman.com or @gryphoness.