Defiance is a game worth putting up with.

Like so many massively multiplayer titles before it, Defiance is riddled with flaws, structural and otherwise. Not all its blemishes are attributable to shoddy networking and packet loss either. A stability update might make the game crash less, but it won't fix the clunky dialogue and inscrutable progression mechanics.

But — not to put too fine a point on it — Defiance is goddamned fun. It streamlines and refines the blast-and-loot ideals of Borderlands and Diablo into a slick package. Its scarce online features give its gameplay loop focus. It does away with the intrinsic slowness of online games, replacing it with speed; with rocket-propelled grenades and rocket-propelled ATVs. Defiance is often fun despite itself — when its problems aren't jamming up its most basic mechanics.

(NOTE: This review covers the PC version of Defiance alone. We will have an update as soon as possible covering the Xbox 360 and PlayStation 3 versions.) 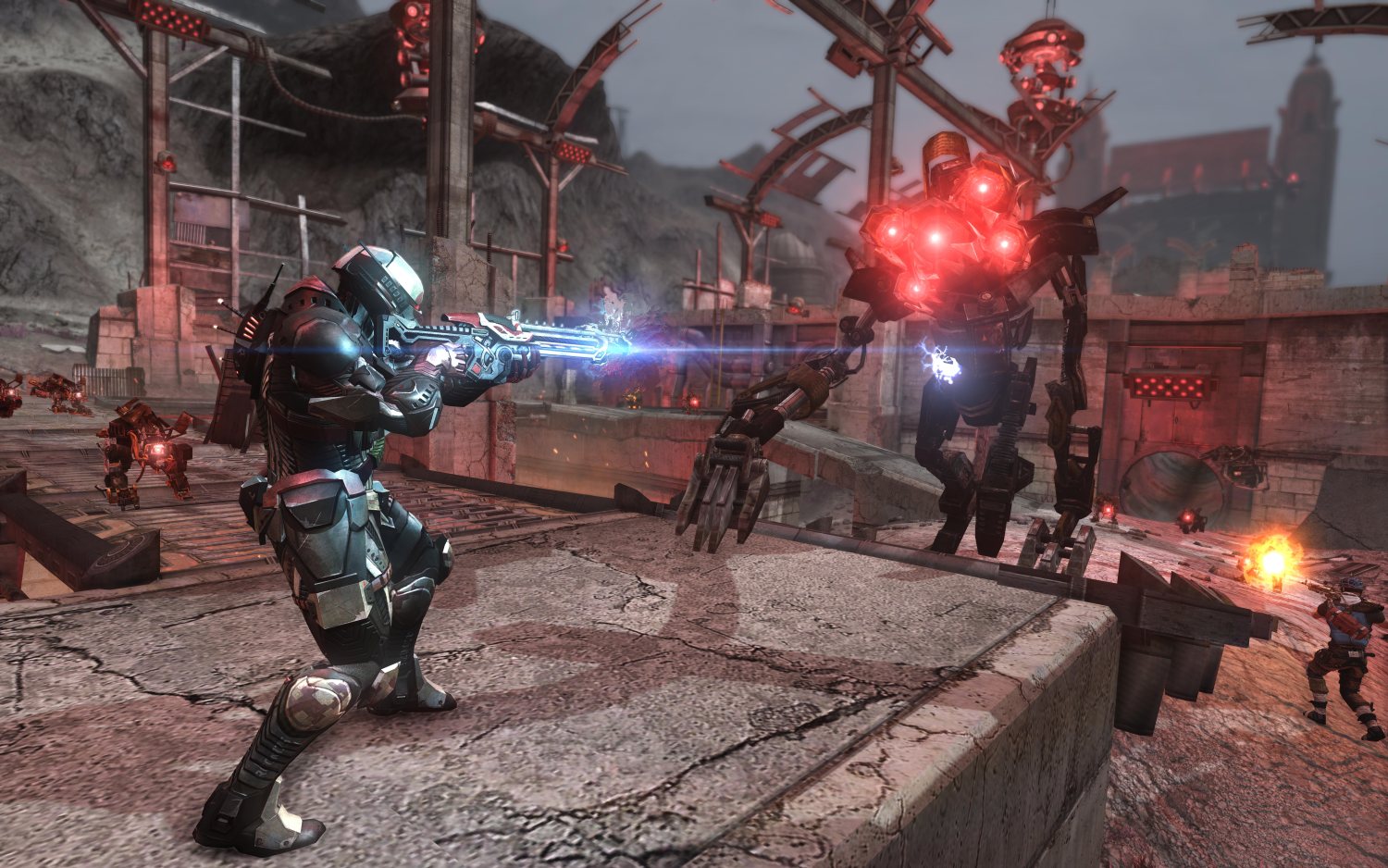 Defiance is built upon a loop that has worked for countless RPG hybrids that have come before it: Kill lots and lots of enemies, collect progressively more powerful gear and abilities, use them to repeat step one. With its buckets of customizable guns, shields, grenades and unlockable perks, Defiance's grind is somewhat derivative of Borderlands, but that kind of specialization is well-suited for an MMO. 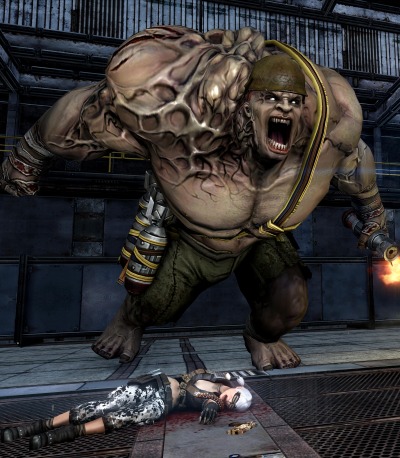 Enemies range from savage wasteland wanderers to cybernetically altered soldiers to mutated, Volvo-sized insects, and they scale to match how many heroes are embroiled in any given conflict. One of Defiance's better attributes, the scaling changes the way you fight from battle to battle. Going solo, you can pick off enemies at your leisure. When you and 30 fellow Ark Hunters are working together on one of Defiance's many dynamic missions, enemies are bullet sponges requiring concentrated fire and dodging.

That scaling is also indicative of how Defiance almost deters socialization and grouping. In dynamic missions, everyone works together to complete objectives regardless of whether or not they're in a group, and everyone gets experience. Why group up, unless you're attempting one of the game's infrequent instances? Moreover, the game's controller-friendly nature ensures that folks won't have a keyboard on hand (I've seen no more than six people use text chat in all my time with the game), and group voice chat works maybe a third of the time. The silence is almost peaceful, which is not exactly a bad thing, since the game's public missions don't require much strategy to overcome.

If you decide to group up, Defiance's interface uses a simple quick menu system to get you into a group with a couple button clicks. There's also matchmaking for the game's instanced co-op missions, competitive skirmishes and "Shadow War" matches, which resemble the territory-capture-and-hold conflicts of multiplayer shooters like Battlefield. Given the solitary nature of the core game, these choices feel like the "multiplayer option," which is an odd dissonance for an MMO to have. Still, if you're looking for some human interaction, there's always a relatively smooth way to it available.

Defiance's greatest MMO innovation is its approach to player mounts. Expensive ponies gated for higher level characters have been replaced with booster-strapped, insta-summon vehicular death machines. At any time — save for a brief cooldown in the event that your vehicle is destroyed — you can instantly conjure up a new ATV, SUV or buggy, hop in and jet to your next destination. It's not just a great way to get around; it's an effective method of crowd control too. 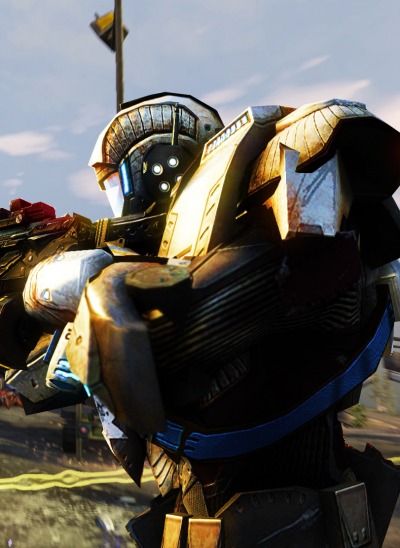 Vehicles give a sense of power that weapons, abilities and perks lack in the beginning stages of the game. Your special abilities, which range from temporary cloaking to weapon damage buffs, aren't terribly useful until you power them up by progressing through levels. Weapons also start out fairly undefined; it isn't until attributes like flaming bullets, energized rounds and stat-improving augments start showing up that they (and in turn, your character) feel unique. But Defiance struggles at getting these systems and its mechanics across to players. 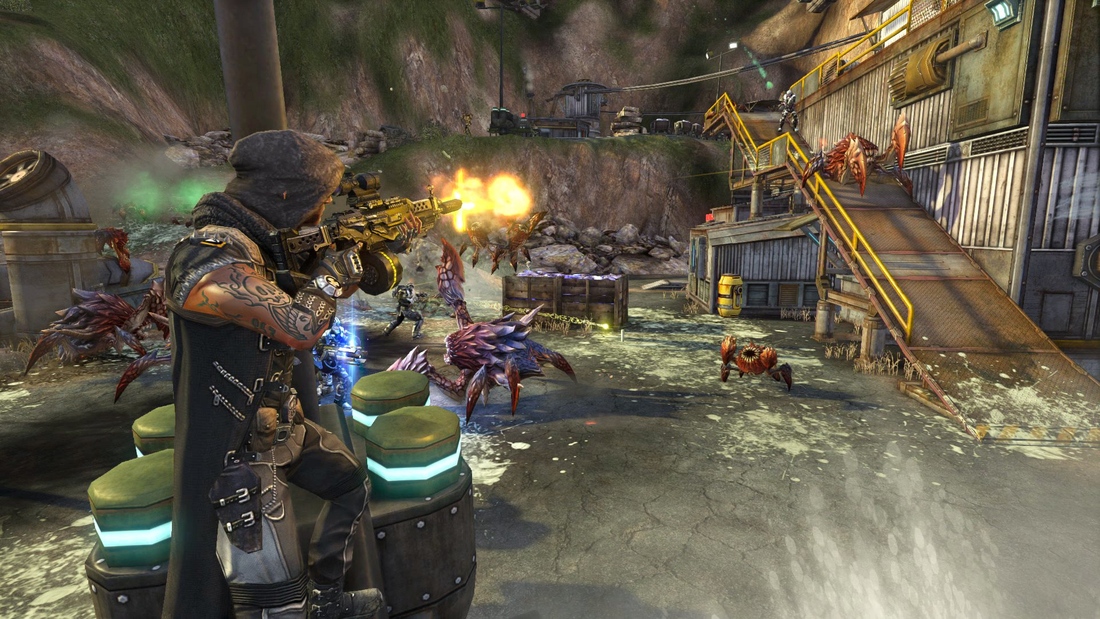 Defiance isn't just an MMO. In addition to the game, developer Trion Worlds has partnered with Syfy to create a TV show based in the same world. The pilot episode of Defiance's television series sets up the world much better than the game, but it still doesn't do enough. Behind its campy dialogue and special effects is a universe dripping with lore — of crash-landed alien races, interspecies conflict, diplomatic ceasefires and world-altering catastrophes. Aside from brief flashbacks, the bulk of this lore is not explained in detail.

The transmedia promise of Defiance is achieved to varying degrees. The main characters of the show appear in special "Episode Missions" in the game, acquiring items which, in turn, they use in the show. The game and the show nod to each other in interesting ways, but both would be better served with a single cutscene outlining the tension between Defiance's alien races and explaining the terraforming tragedy that shaped the setting. The following episodes may be more informative, but you'll have to turn to Wikipedia to fill in the canonical gaps for now.

Weapon customization is a vital part of the game which goes almost entirely unexplained. Other in-game activities fare even worse: The various matchmaking modes, the faction-based contract quests, even character levels, which can be increased by completing sets of achievements — all are revealed to the player by single, seconds-long tooltips.

The game's world, a ruined San Francisco, also remains frustratingly vague in Defiance's story. Characters and collectible audio logs only hint at the world's cataclysmic history, leaving enormous gaps in the game's lore. How did the world get so wrecked? And where did all these aliens come from? The game doesn't give up this information willingly.

New San Francisco is as undefined as the characters that inhabit it, whose dialogue oscillates between campy and nonsensical. Some characters, like AI combat companions and quest-givers, only come with a few lines, which you should be prepared to hear ad infinitum.

Those issues sound damning, but they're drowned out by the cycle of combat and loot. It's when that cycle is interfered with that Defiance takes a nose dive.

Animations sometimes get stuck, which is annoying when you're accessing a shop, and deadly when you're reloading in a firefight. AI teammates occasionally get hung up upon reaching quest objectives and can only be unstuck by restarting the game. Sometimes, rewards for finishing dynamic missions aren't distributed. Sometimes your group members will be spirited away to other server instances mid-mission. Sometimes you respawn a mile from your designated respawn point.

Defiance's combat carries the game despite the scope of its many faults. However, when its rough edges start to get in the way of the game's only strength, no amount of forgiveness or patience can remedy the experience.

...despite the game's many faults

That solid core is a rock worth polishing. Even with its blemishes, there's a lot of enjoyment to be had in the creaking world of Defiance 1.0. Its creators have banked on the "fun shall overcome" school of game design which, with exceptions, Defiance achieves. I only wish it didn't have to overcome quite so much.