MIT Game Lab's Andrew Haydn Grant is a busy man, so naturally the game he's working on is tailored for the lifestyle of equally busy people.

Grant is what he calls team lead, "the guy pushing the whole thing forward," on Lex Laser Saves the Galaxy, Again, a strategy game developed by a team of Game Lab faculty, alum and students. The group launched a Kickstarter campaign for the game earlier this week in hopes of securing funding to complete and polish it.

Lex Laser is about the universe's greatest hero — who just happens to be not-so-great at all. Players will be Lex's partner in combat, helping him (or her, there is a gender option) take down bad guys and win the day. Players can also customize weapons or build them from the ground up, complete quick challenges in Puzzle Mode or sweep through the story in Adventure Mode.

But the biggest feature Grant and his team are pushing forward is the game's accessibility, as it was designed for people who don't have time to sit and play for long stretches of time.

"Busy people don't get the same kind of experiences people who settle down for long playtimes do," Grant told Polygon. "I find myself busier and busier and can't play the games that demand more from me, as much as I'd love to. It makes me sad because I really enjoy sinking my teeth into a game like that, but I would appreciate a tighter game experience that fits with my schedule and needs."

"I'm hoping there are people out there with those desires that we can meet with Lex Laser, and give them a game that creates a rewarding experience in a smaller amount of time," he added. "These shorter experiences are still worthwhile things. You have short stories and then you have novels; they are different things that appeal in different ways."

Lex Laser's turn-based tactical gameplay is influenced by older games like Robots, a Unix title in which players must navigate a field of squares to make attacking robots crash into one another, and those with similar tile-based combat mechanics like Diablo and Gauntlet. The pen and paper version of Dungeons and Dragons has also heavily influenced the way Lex Laser unravels its story, as Grant borrowed years of experience playing and running the game with others.

Grant said the decision to go with turn-based strategy mechanics also rolls into the team's desire to create a easy drop-in-drop-out experience.

"We started out thinking about busy parents, but we realized it's applicable to busy people in general," he said. "When I try to play a game at my house and something comes up, it's nice to be able to just walk away without having to worry about anything going wrong in-game, especially when I don't have time to hit the pause button. With children, you don't always have time to press it. I wanted something that would be waiting there for me when I got back to it."

Grant is also a fan of more cerebral puzzle-solving, building challenges that will tax players brains rather than asking them to string a set of physical actions together. Lex Laser's puzzles are built with this in mind, as time constraints can also interrupt lengthy action sequences. 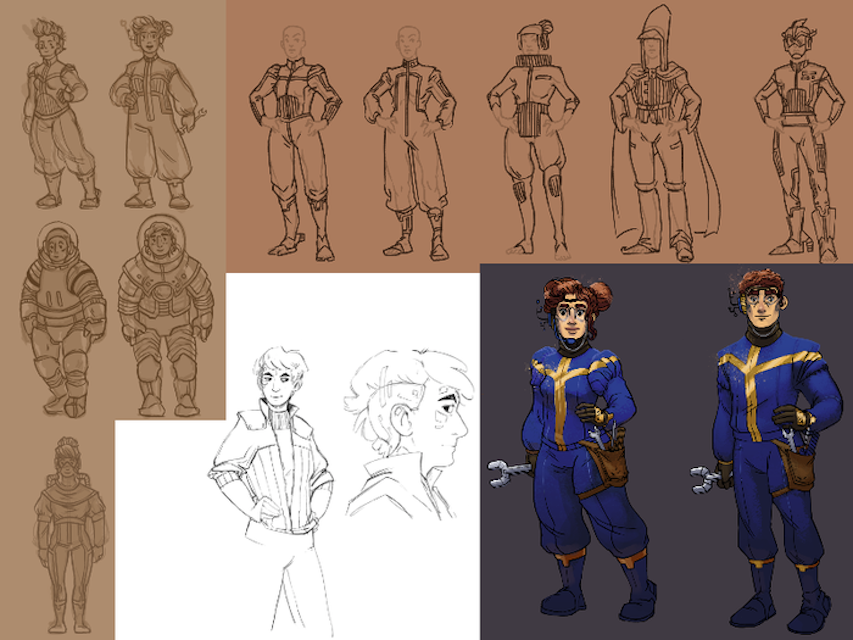 The eponymous main character of Lex Laser has also been designed with busy people in mind; rather than begin with a character players grow into like in an RPG or action game, Lex's status as an overpowered hero is presented at the very beginning, as is his secret flaw of cowardice. His abilities are also boiled down to a handful, so players don't have to waste time tracking down what they have, equipping or upgrading.

Lex's larger-than-life persona was built to fit the game's setting, the desolate reaches of outerspace, something Grant felt could only be readily sold in a science-fiction environment.

"He's overpowered to help players enter the game more quickly," he added. "And there are few genres where people will accept it. Sci-fi makes it easier. To keep the game moving and not overload the player we wanted to focus on one character, and outer space is a fantastic mood setter for that. You're alone in space, there's no one within lightyears of you, and that sort of loneliness is part of the concept."

Should Lex Laser be successfully funded on Kickstarter, the game will be made available for Windows PC, Mac and Linux. in 2014. Grant hopes that somewhere down the line his hesitant hero could find a home on mobile as well.

"Just because we think it's cool doesn't mean other people do, so we're hoping Kickstarter can help us with that," he said. "If we're going to put work into it we want to make sure people find it interesting. Kickstarter is the acid test for it.

"I want to make a game people actually want to play," he added. "Some people want make games for themselves, but I want players out there to say, 'Wow, I really enjoyed that.'"