Terraria is an alluring, virtually endless game if you can get past the difficult beginner's patch

Terraria has the power to build countless worlds full of hidden treasures and huge challenges, but it can take hard work to uncover all it has to offer.

Originally launched on the PC in 2011, a cursory look at Terraria's mechanics gives the impression that it's a 2D clone of the popular building game Minecraft. But where it lacks Minecraft's absurd flexibility, Terraria has more structure, more goals. It has more of what traditionally adds up to a game.

That structure and those goals present a unique set of problems that Terraria only half-overcomes. Developer Re-Logic understands the joy of exploration and creation, but its efforts to expand beyond a sandbox fall short in some frustrating ways.

Terraria doesn't have much of a story, but each randomly-generated world shares certain features that form an arc for the game. Your created character spawns somewhere around the middle of the 2D map, and then it's a race to chop down trees, build a house, and craft new armor and weapons from various ores underground. A natural progression of those ores as you dig deeper — copper, then iron, then silver, etc. — determines when you're ready to ready to take on the game's handful of difficult boss encounters. 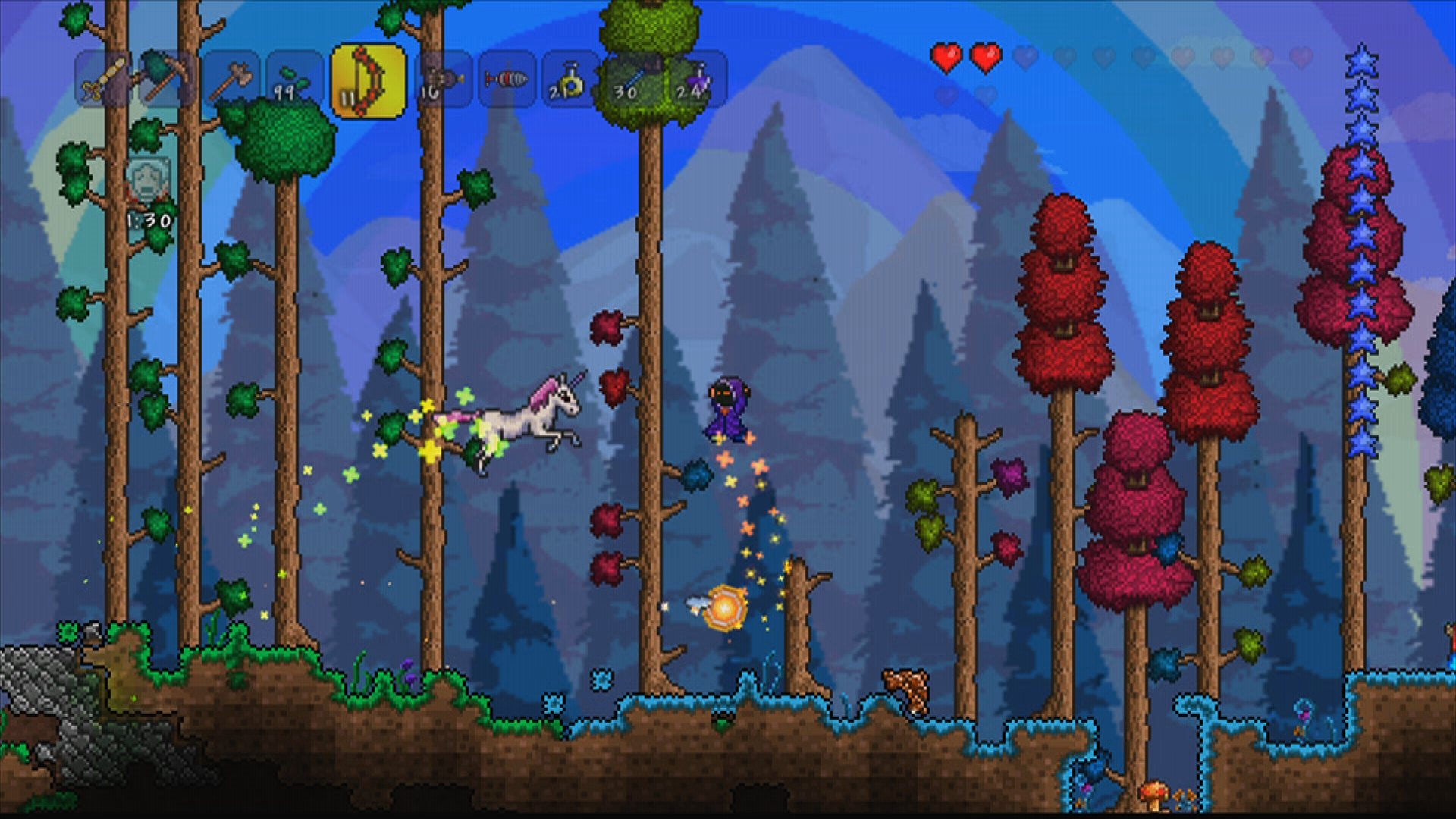 You'll need more than just upgraded equipment to handle the bosses, though. The process of summoning them requires information that Terraria hesitates to provide. One boss won't appear until you destroy three orbs that spawn deep underground in a specific section of the map. The game provides an NPC guide who — in theory — will pass along this information, but good luck picking out the vague hint and making sense of it amidst the flood of randomized in-game tips.

Randomization threatens to derail the Terraria experience elsewhere as well. You can choose three world sizes when you start the game, but even the smallest of worlds is massive, taking 20-plus minutes to cross from one side to the other and even longer to dig to the bottom layer.

Those vast expanses are fun to explore, but key items can get lost in their depths. For example, you'll need to find heart crystals to increase your max health if you hope to survive more dangerous terrain. In the second world I created, I spent over 20 hours scouring a huge portion of the map from the surface all the way down to the lava-filled underworld without running into a single heart crystal. Yet I stumbled across a piece of the uber-powerful end-game armor set in a chest barely hidden below the surface near my spawn point. Since the game's balance is so hard to predict, whether a world is easy and approachable from the start or a pain in the ass for an extended amount of time depends entirely on luck. 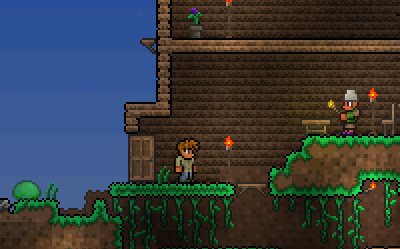 The search for upgrades is at least a little easier in the console version of Terraria thanks to the new world map, which was absent in the PC release. Though it looks like a messy collection of colored blotches, the map can reveal the location of chests, heart pieces and enemies before you've dug deep enough to see them for yourself. It's not the perfect solution for the game's sometimes-frustrating hide-and-seek, but it's a step in the right direction. 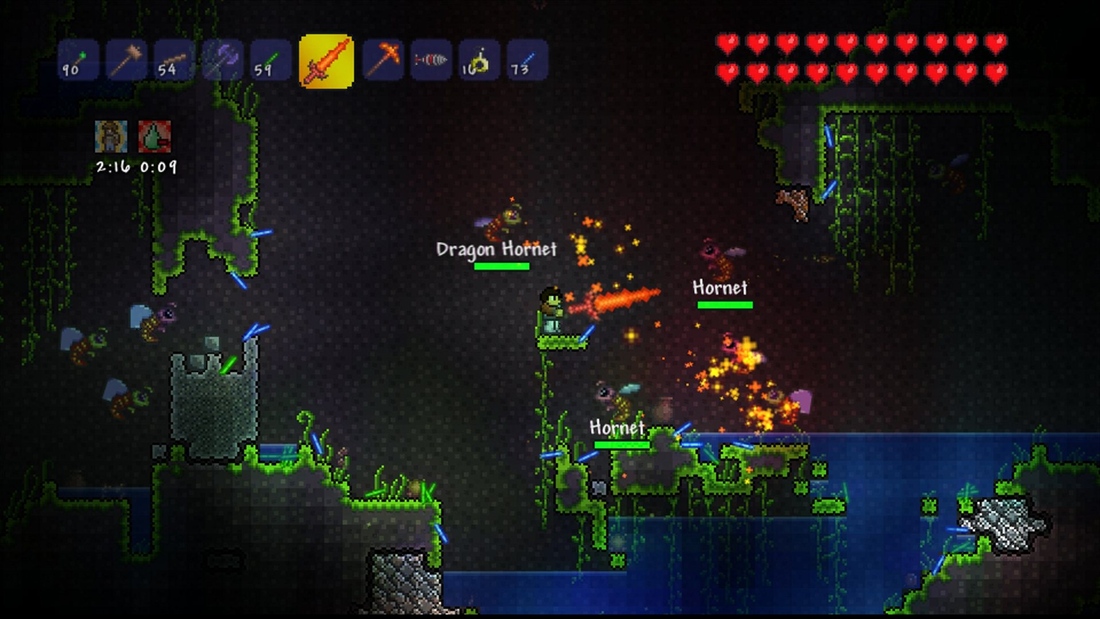 The biggest concern in Terraria's transition from PC was controls. The original version was greatly aided by the accuracy of mouse controls for determining which blocks you were aiming to mine.

Amazingly, not much has been lost in 505 Games' translation. A click of the right analog stick toggles between two different control methods. The normal state just has you control the direction of your aim, with the game auto-targeting blocks or enemies directly in front of you. This seems awkward at first, but if you hold the right analog stick in a direction and keep moving while mining, the game will auto-mine the three-block height/width that's needed for your character to keep moving in that direction. This setup allows for easy, fast extended mining sessions.

For situations where you need to get more precise, you can switch to free aim, which unlocks the pointer from the character and allows you to move it around and pick out blocks independently. The pointer speed can be a little slow, but it's preferable to a speed that would make it easier to overshoot your target over and over again. The revised console controls for Terraria took me a good hour or so to get used to, but once they clicked they were just as comfortable as the mouse and keyboard.

Whether through blind luck or brute force, Terraria's challenges do eventually become surmountable. It all clicked for me when I managed to pillage a few heart crystals from a dungeon and created a lightsaber using ore that I mined from a meteorite. And as awesome as that felt, it's only the tip of the iceberg for what's available in the game's massive list of craftable weapons and armor. Each item reveals new strategies for exploring the world and taking down enemies, and there's enough here to keep you busy for hundreds of hours. Even with the initial frustration, I wanted to return to Terraria.

You can also show off and share your gear with friends. The console version of Terraria allows for split-screen co-op as well as up to eight players joining your world online. It doesn't seem to contain any way to join random worlds or open up your game to strangers, but that's probably for the better; it would be frustrating to have some anonymous troll pop into your world, destroy your carefully-built structures and steal your treasure. That said, it's easy to locate and jump into friends' games, and I experienced very little lag in my multiplayer tests. Whether you're taking on bosses, mining, or searching for treasure on islands in the sky, Terraria is greatly improved with friends by your side.

Terraria is an alluring, virtually endless game if you can get past the difficult beginner's patch

Terraria is a trade-off. There's a virtually endless amount of scouting and looting to be found in its randomized worlds â not to mention completely changing already-explored worlds by engaging the aptly-named, brutal Hardmode â but you'll need to get through the difficult beginner's patch first. Terraria could do a better job of leading players toward the treasures they need for basic survival and the knowledge they need for basic progression without robbing them of freedom to discover most of what it has to offer at their own pace. There's an alluring game buried under these little issues; it just takes some digging to find it.