Stepping out with the Stinky Footboard, a PC gaming controller for your feet

Share All sharing options for: Stepping out with the Stinky Footboard, a PC gaming controller for your feet

In an era when accessory manufacturers are releasing computer mice with ever-increasing numbers of buttons, the creators of the Stinky Footboard decided to go in a different direction. They wanted to fill a niche that hasn't really existed until now, and give players of PC games not just another input device, but a better one.

Secondary buttons on mice and keyboards allow players to increase their all-important actions per minute (APM) number, but they often require you to take your fingers — and attention — away from a game's vital actions, even if only for a moment. Two and a half years ago, Montreal-based Stelulu Technologies began working on a device that would allow players to offload secondary actions to a foot, letting them keep their fingers focused on the game.

According to Stephane Rivard, co-founder and president of the company, it took a lot of iteration to get the controller right. He explained that a device like the Stinky Footboard has unique challenges associated with its design. If it's going to be used as a video game input device, it has to be as sensitive as a mouse. But a foot is much stronger than a finger, and the controller also has to be able to withstand a lot of pressure.

Rivard also pointed out that pedal-like devices for gaming do exist, but just like a kick pedal for a drum set, repeatedly pushing down on them can eventually tire out your foot and cause discomfort. And this kind of controller would ideally allow you to rest a foot on it without depressing the "buttons," but also be responsive enough to let you quickly activate the switches without too much exertion. 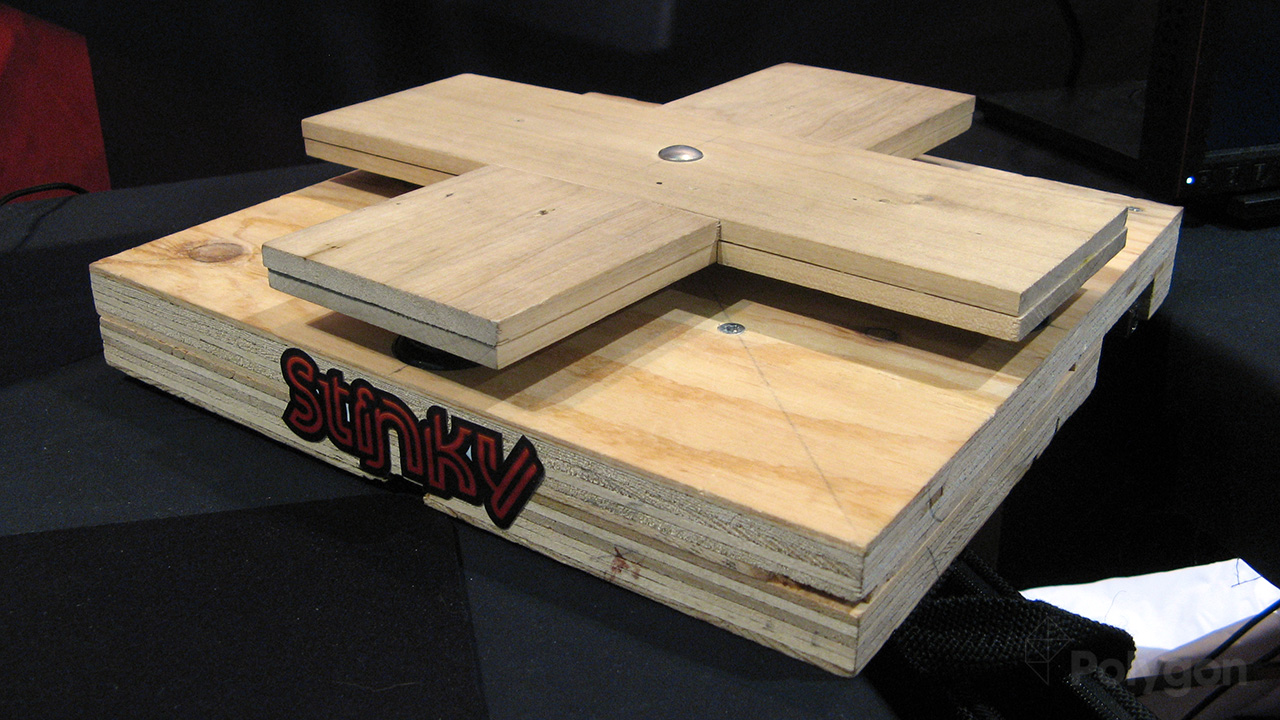 Stelulu brought its first prototype, which you can see in the photo above, to PAX East 2013 along with the final Stinky Footboard. Rivard told Polygon that the prototype was made with wood boards, springs from RC cars and buttons from arcade controllers. It worked and proved the viability of Stelulu's basic design, but it was clear that the company needed to construct the device with materials that would stand up to consumer use.

The final design is built almost entirely of custom parts: plastic surrounding a steel backbone, with an aluminum top plate. The only off-the-shelf parts Stelulu used are Cherry MX switches for the four "buttons." The Stinky Footboard is designed to be a heavy-duty piece of equipment — Stelulu told us that one unit survived being run over by a 7,000-pound truck, and the company brought that Footboard to PAX East. It looked none the worse for wear, and in the video Stelulu posted of the real-world test, the device still worked afterward.

Stelulu has also designed the Stinky Footboard as a customizable device. Different people can exert different amounts of pressure with their feet, so the Footboard ships with three sets of springs with varying amounts of resistance. More detail-oriented players can further tweak the springs' tension with an Allen wrench.

The device is universally compatible with PCs — it shows up as a human interface device (HID) in Windows after being plugged in via USB, and requires no special drivers. Because of that, it will also work on Mac, but Stelulu only offers its Footboard configuration software on Windows at the moment. The company hopes to have a Mac version of the software ready in late 2013, and could produce a Footboard that's compatible with consoles if there's demand for it, said Rivard.

We got some feet-on time with the Stinky Footboard at PAX East in a 10-minute session of Battlefield 3's campaign. The controller is designed for secondary actions, not as a replacement for movement or aiming. In our demo, with the Footboard laid vertically beneath our right foot, we had sprint on the forward button, crouch on the backward button, prone on the right button and reload on the left button.

There's definitely a learning curve to the Stinky Footboard, and Rivard acknowledged as much. But within a few minutes, we were using our foot for the aforementioned actions without much thought. Doing so allowed us to keep our left hand on the WASD keys for moving, and our right hand focused on aiming and firing. It was easy to see that using the Footboard could become second nature before long. And the device could prove particularly useful in complex games with numerous commands, like League of Legends or StarCraft 2: Wings of Liberty.

"Once you start using it, it doesn't take a lot of time to step up your game," said Rivard.

Rivard also told us that the Stinky Footboard can have additional uses. It's possible to use two Stinky Footboards at once, one under each foot, and according to Rivard, the controller can be used for other applications outside of gaming, like editing video or audio.

using the Stinky Footboard could become second nature before long

Stelulu launched a Kickstarter campaign for the Stinky Footboard today. Rivard said the company had a successful pilot production run of "several hundred" units, and is now asking for $75,000 in contributions in order to fund mass production. If the campaign is successful, Stelulu's production timeline has the company launching the Footboard in June, with retail pricing set at $119 (Kickstarter backers can pre-order a unit discounted to $99). The 30-day Kickstarter funding drive ends May 2, and as of press time, has pulled in more than $8,000.

And as for the name? "It's memorable," said Rivard.