Next-gen Xbox official, to be unveiled on Microsoft's Redmond campus on May 21

Share All sharing options for: Next-gen Xbox official, to be unveiled on Microsoft's Redmond campus on May 21

The next-generation Xbox will be unveiled at a gathering on May 21 at Microsoft's Redmond campus, according to an invite sent out to press today.

The invite, entitled "A New Generation Revealed," states that the event will take place at 10 a.m. and will feature Don Mattrick and the Xbox team on the "Xbox campus for a special unveiling." The event invite includes the hashtag "XboxReveal."

According to the follow up confirmation email, attendees will need to arrive at the "Xbox Campus" at 9:15 a.m. Final email confirmations along with details about the address and onsite details will be sent out on May 6.

Microsoft's Larry "Major Nelson" Hryb wrote on his site that May 21 will "mark the beginning of a new generation of games, TV and entertainment. On that day, we'll be holding a special press event on the Xbox campus and we invite you to join us via the live global stream that will be available on Xbox.com, Xbox LIVE and broadcast on Spike TV if you are in the US or Canada.

"On that day, we'll share our vision for Xbox, and give you a real taste of the future. Then, 19-days later at the Electronic Entertainment Expo (E3) in Los Angeles, we'll continue the conversation and showcase our full lineup of blockbuster games." 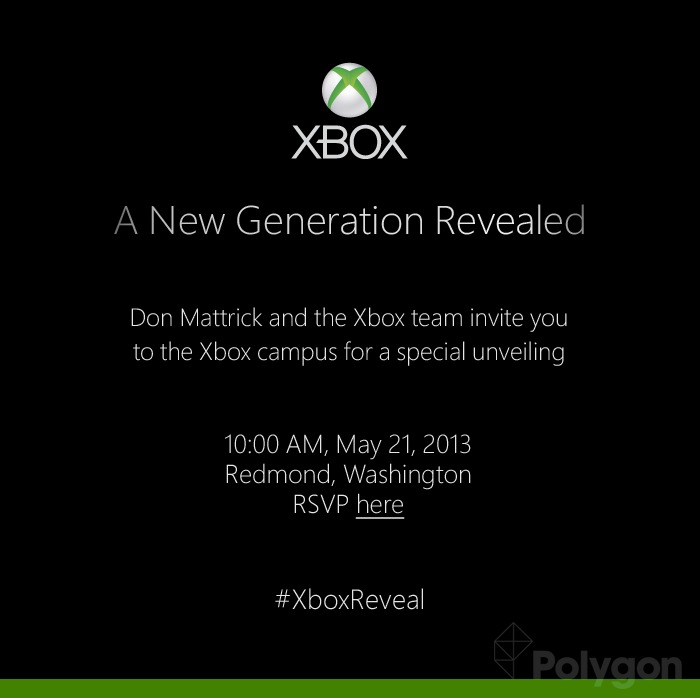 The Xbox reveal event will debut the much-rumored, but until now, never confirmed, successor for the Xbox 360 along with the next-generation take on the motion-tracking Kinect. The event comes a month later than originally anticipated, with sources saying that Microsoft officials have shifted the event's timing at least twice as they work to find the sweet spot for their announcement.

The next-gen Xbox, codenamed Durango, will be a cross-entertainment device that can serve as a cable box and play video games, according to rumors. The console will launch alongside a next-generation Kinect sensor that can detect not just broad motion, but even the subtle movements of the eye, according to a Verge report.

Microsoft recently announced plans to sell its Mediaroom IPTV business to Ericsson, saying that moving forward the Xbox would be 100 percent of the company's focus on television.

Rumored games for the next Xbox include first-person hack-and-slash title Ryse and a new Forza title.

The new Xbox unveiling will be the final console unveil for this new generation of consoles. Nintendo's Wii U launched late last year and Sony unveiled some details about their upcoming PlayStation 4 during a New York event earlier this year. Neither the PS4 nor the next Xbox have official release dates, but the PS4 is confirmed for a holiday release and the next Xbox is rumored to hit stores then as well.