Chris Pine did his job. Why did nobody else?

As we consider Star Trek: The Game (of the Movie based on the Show), as we hold it up to the light to try to find something, anything we can salvage, let us not forget Chris Pine.

Chris Pine is just a regular guy from L.A. who happens to be physically without fault and whose dad was on CHiPs. You probably know 100 guys just like him. He didn't know he'd be contributing to one of the worst games, technically and conceptually, I've played.

He just wanted to be Captain Kirk.

You just want to be Captain Kirk.

It is too late for Chris Pine. It is not too late for you. That's why I am going to devote around 950 words to preventing you from buying — nay, playing — Star Trek: The Game.

Is there a worse fit for Star Trek than a third-person, cover-based shooter?

Is there a worse fit for the world of Star Trek, that subversively powerful force of social equality and acceptance, than a brainless, cover-based third-person shooter? I submit that there is not. (You do get to pilot the Enterprise for one stage, but by "pilot" I mean you play a terrible, poorly explained turret minigame.) Everywhere else, Kirk and his partner Spock are given optional objectives that emphasize phasers set on stun rather than kill, but rewards are paltry and a fourth of the game's achievements are built on accruing kills. So, you tell me.

At one point, a crew member on the radio refers to the Gorn (the disposable phaser blast catchers that keep you from your objectives) as "creatures." A sentient alien race that happens to not speak English. A Starfleet officer. Creatures.

The "creatures" have absconded with a dangerous, magical MacGuffin that the Vulcans need for their "New Vulcan" colony to replace their exploded home world. Kirk and Spock set out to shoot every possible Gorn to bring that MacGuffin back.

The Gorn have also "infected" some Starfleet officers and turned them against our heroes, possibly because developer Digital Extremes already had the character models lying around.

The story is largely expressed through Kirk or Spock making an extremely obvious point about their situation and the other noting that it's a very obvious point to make. (This happened eight times before I lost count.) There is the occasional good line for Zachary Quinto as Spock or our beleaguered Mr. Pine — you'll know those rare lines because you can't hear the actors' hearts audibly breaking as they deliver them. 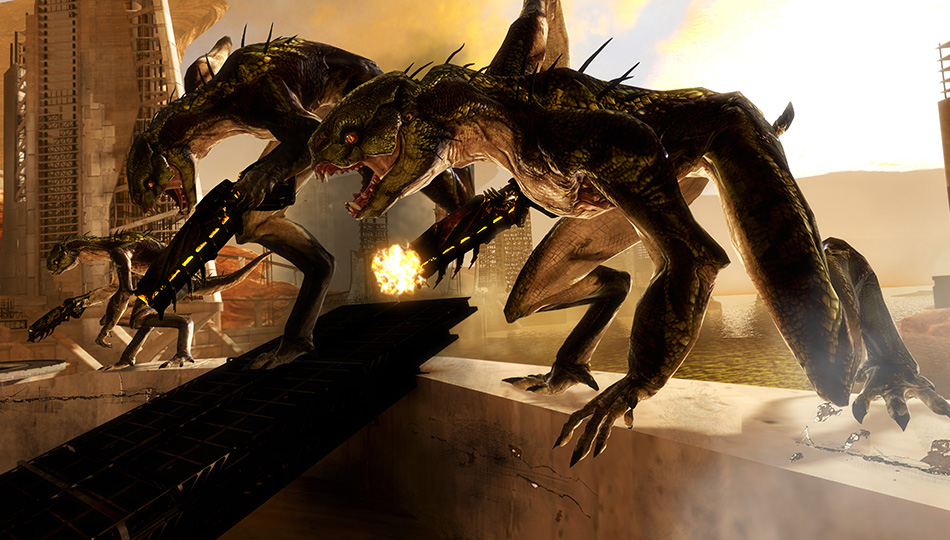 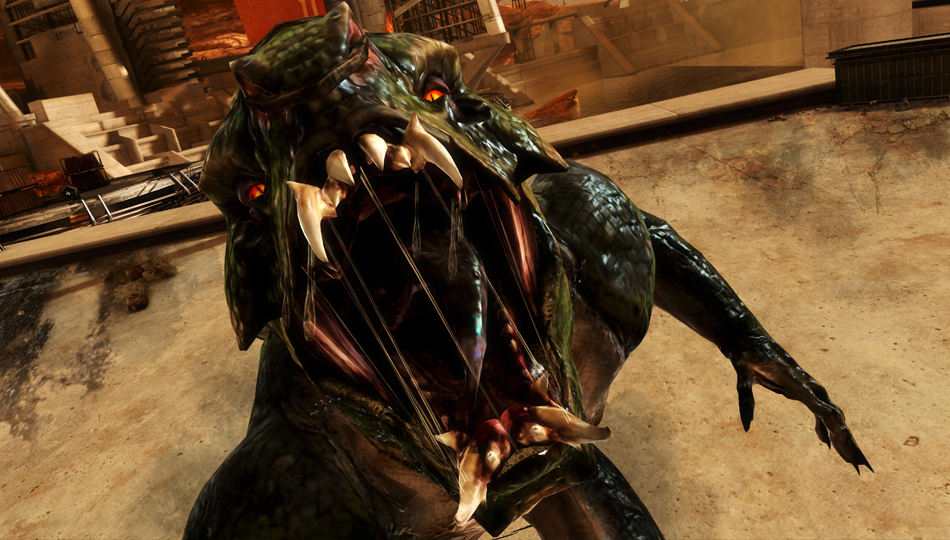 This is a verbatim bit of text from one prompt in Star Trek: "Work together by both rapidly pressing X to complete co-op pry door objectives." I swear to God, if there's a collection of words and punctuation that makes me want to throw every video game in a well and just read a book more, I can't think of it.

And yes, you read that maddening prompt correctly: There's co-op. Which is short for cooperative, which is a funny way of saying, "I'll shoot half the guys so you don't have to. Now help me pry open this door." The fact that you and your online or local partner are separate entities manifests interestingly in one level when you and your partner are each given guns that can teleport the other. But don't worry: The idea is severely limited (you can only transport onto small, specific pads), underutilized and promptly forgotten about after that level.

There's co-op. Which is short for cooperative, which is a funny way of saying, "I'll shoot half the guys so you don't have to. Now help me pry open this door."

It’s not drop-in, drop-out; you can only join at the beginning of a chapter. Also, if your online partner drops from the game, your progress is reset to the last checkpoint. Delicious. It also appears to, as of publication, not work for many on PC. It didn’t for me.

Three times I had to quit Star Trek and restart simply because the game ceased to function.

Are you ready for the surprise twist? Star Trek is also broken.

Three times I had to quit Star Trek and restart simply because the game ceased to function. A door didn't open, a cutscene didn't trigger, whatever. It just stopped. Nearly every animation is glitchy. The Gorn are designed to clip through themselves. Your AI partner will sometimes sprint irrationally from a fight, occasionally when you need him to come fix you up so you don't die.

Star Trek has picked up practically every bad habit of the past five years of game design. Hinky ledge traversal. An arbitrary upgrade system. Hacking minigames that evolve from "dull" to "Ambien" through the course of the game. Samey secondary weapons.

It's almost messianic in its willingness to take all of gaming's sins onto its rickety frame. Sadly, unlike Jesus, the death of Star Trek would do nothing to dismiss these sins; they'll still be just as present tomorrow. 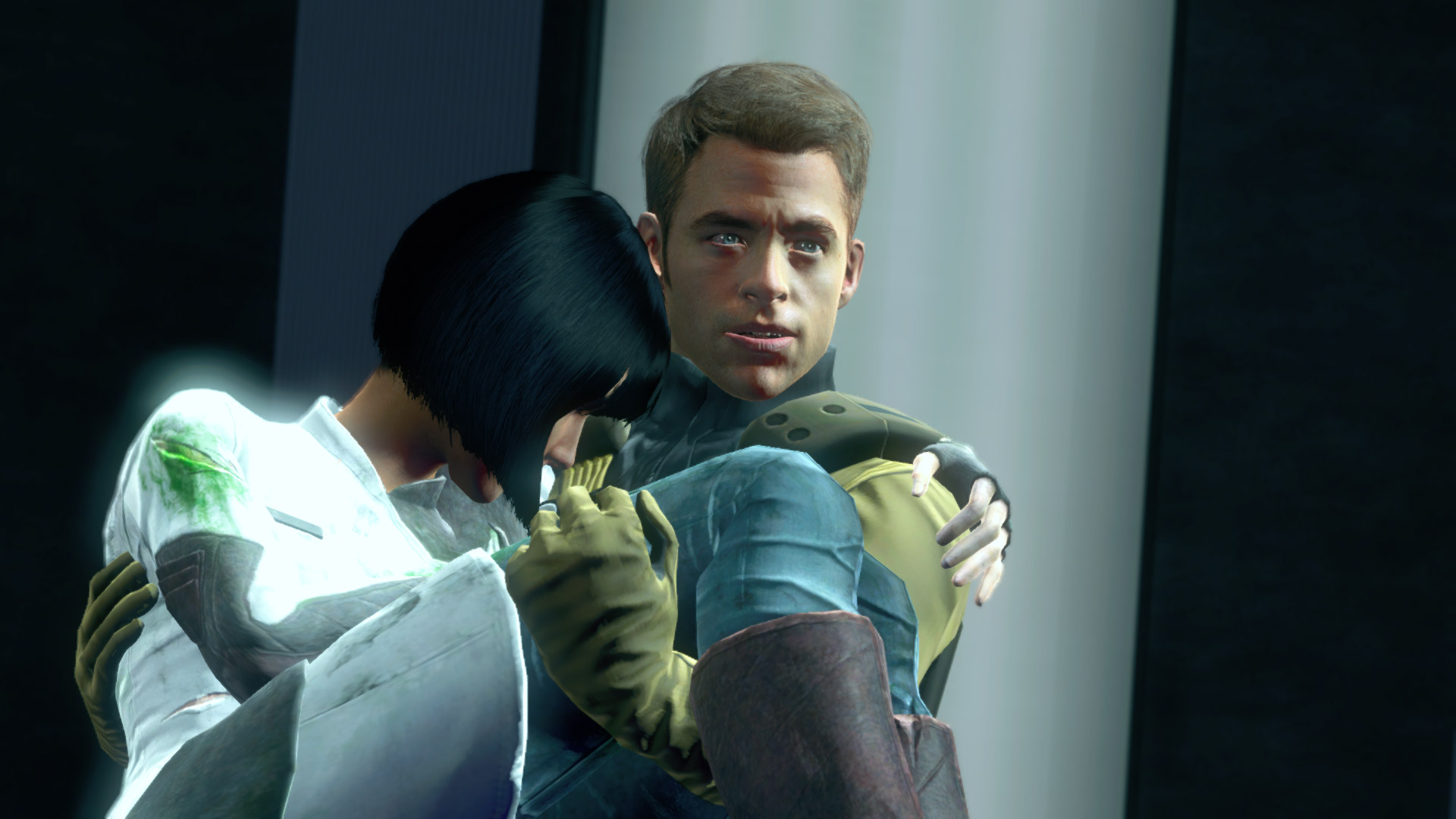 Chris Pine didn't know any of this going in. He gave a solid, enthusiastic performance as Kirk, even on the clunky lines. He's just a beautiful, regular joe from L.A. doing his best to bring something fans care about to life. Chris Pine gave a shit. Chris Pine did his job.

Why did nobody else?