Developed by Visceral Montreal, Army of Two: The Devil's Cartel follows in the shuffling footsteps of two previous games that saw what I can only describe as a critical shrug of the shoulders.

The original Army of Two had some unique ideas about cooperative third-person shooting, but was plagued by clumsy controls and monotonous level design. 2010’s Army of Two: The 40th Day played with moral choices in-game by showing the often surprising conclusion of those decisions via animated cutscenes.

Army of Two: The Devil’s Cartel settles for blowing people and sometimes scenery into pieces, which is appropriate — Visceral Montreal has also casually dismantled most of what made Army of Two even somewhat distinctive, leaving a completely forgettable exercise in third-person monotony in its stead.

This is supposed to be strategic.

At first, it seemed like Army of Two: The Devil's Cartel might build on the cooperatively tuned conceits of the prior two games. No matter what, you're always working in a team, third-person shooting your way through hordes of enemies as you build up "aggro," which can be triggered for Overkill. Overkill grants brief invincibility, increased damage, and a magazine that never runs dry. The wrinkle: You need to draw attention from enemies to build up aggro, which puts you in more danger.

This is supposed to be strategic. The idea goes something like this: One member of your two-person team draws fire, while the other sneaks around to flank a position, or whatever other play you decide to call. In reality, the one play is just about all there is, because it's all there needs to be. Army of Two: The Devil's Cartel supports the idea of strategic play with some multi-tiered level layouts and enemies that spawn from in front and behind, but the enemies you face hardly require much in the way of clever thought. Even amidst the more complicated onslaughts later in the game, my winning strategy tended toward "more bullets" over more thought. 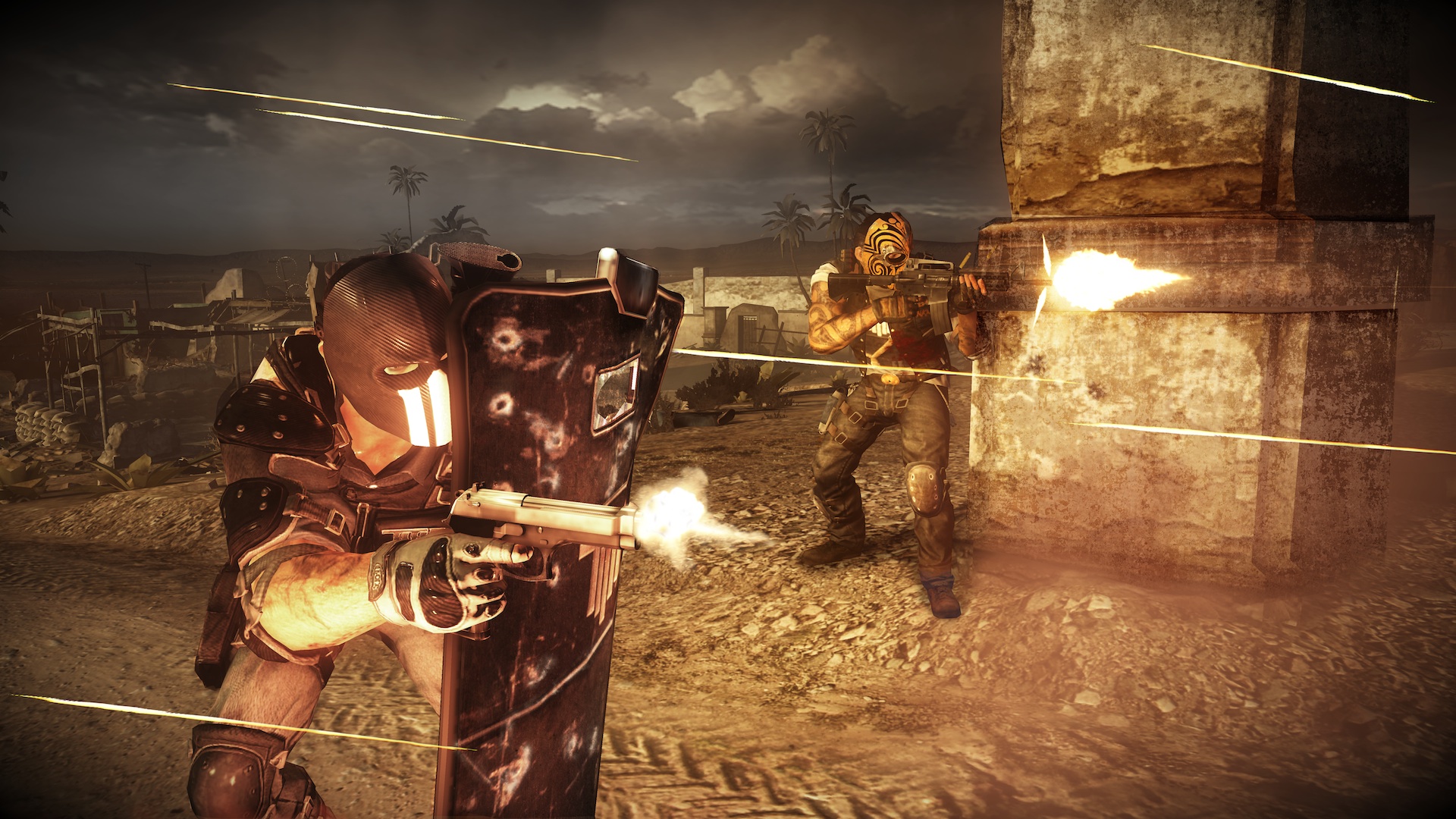 That simplicity chases Army of Two: The Devil's Cartel from start to finish. You can flank. You can play strategically. But you never really need to. You and your teammate build up aggro at the same time, and once you upgrade your weapons enough to accumulate it quickly, you can trade off activating overkill about half the time. The quirks of co-op play from previous games have been blasted away by constant carnage. Waves of cordite and lead are all there is.

As if in acknowledgement of this, developer Visceral Montreal has amped up the destruction, the body count and the gore. Bodies are blasted apart as often as pieces of each stage, which would almost be eighties-movie comical were it not for the boorish tone that plagues the story. Set in Mexico, Army of Two: The Devil's Cartel pits the T.W.O. private security organization against, well, a cartel trying to kill an up-and-coming politician.

It's not an awful setup for an action movie necessarily, but The Devil's Cartel is borderline nonsensical in its execution. Characters wander into a scene with names and implied backstory only to die minutes later as some kind of motivation for the two main characters - referred to mainly as Alpha and Bravo. This would just be boring, save that there's a fairly regular injection of gross bro-humor, complete with token gay jokes and misogynist comments.

Then there's the only female character in the entire game, who isn't wearing a bullet-proof vest over a tight, bright yellow t-shirt for reasons I leave up to you to decipher. It would be more offensive if it weren't so dumb, or if The Devil's Cartel were less predictable. 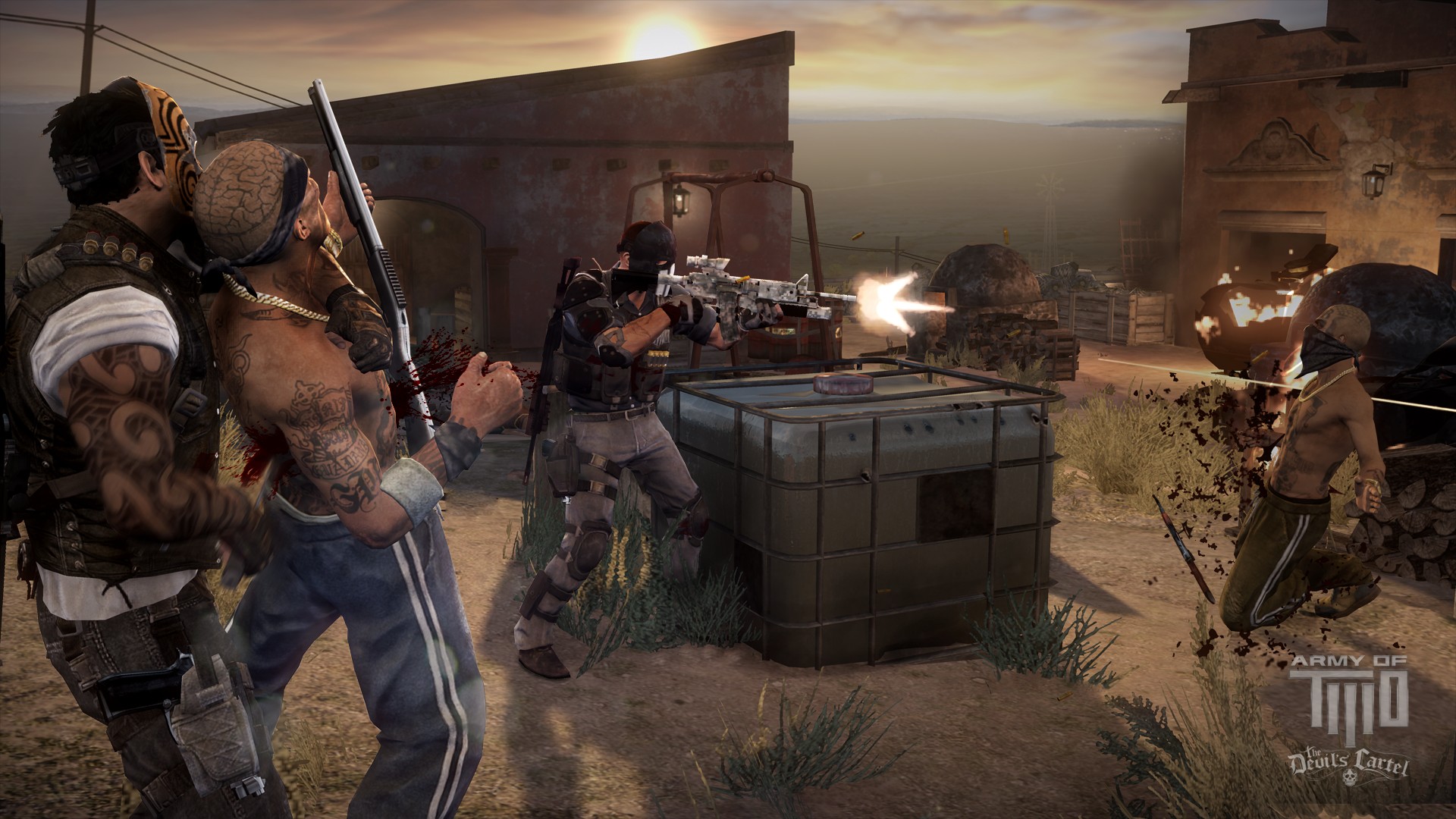 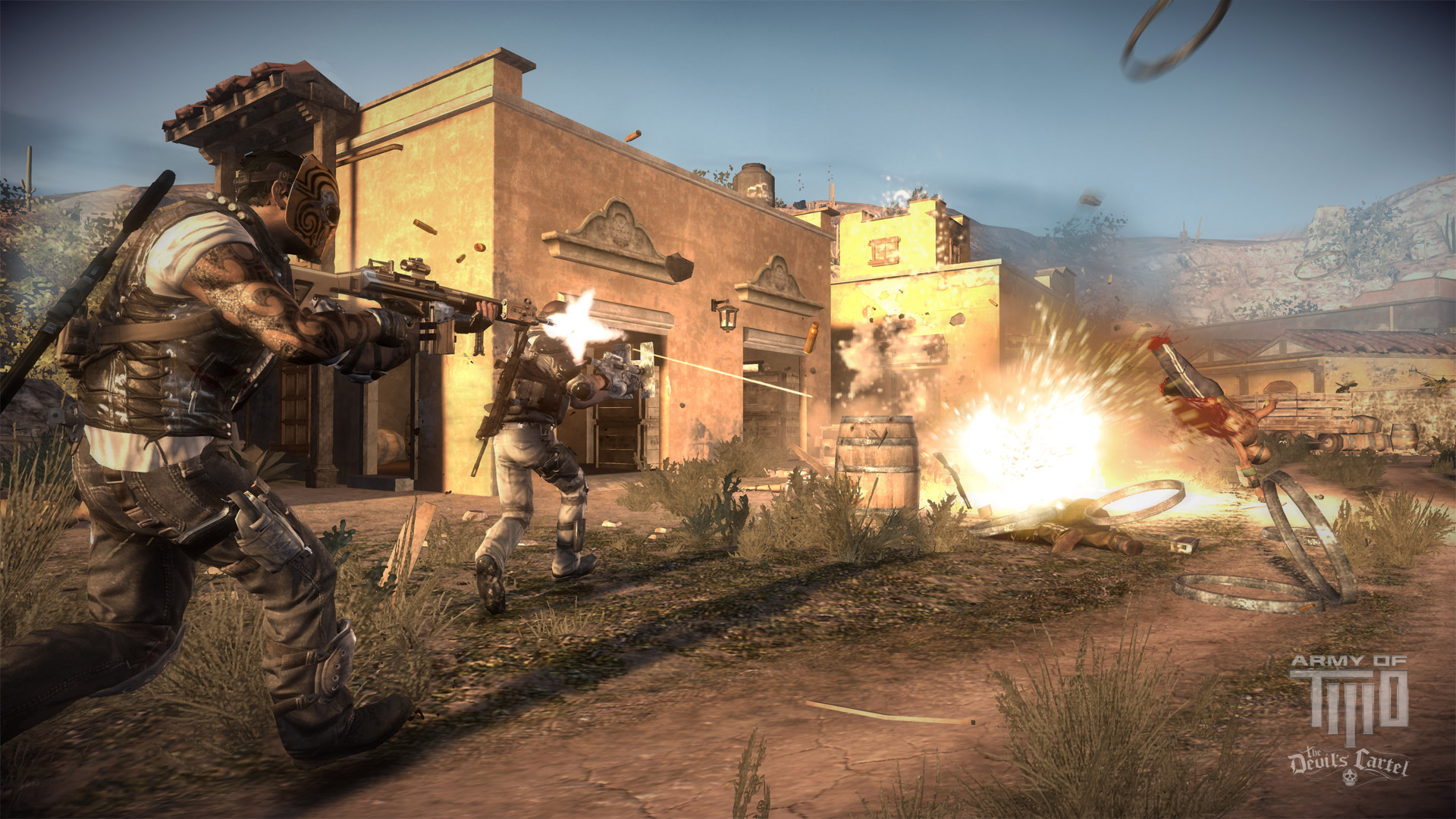 "I can't imagine dragging a friend through The Devil's Cartel and retaining bro status." 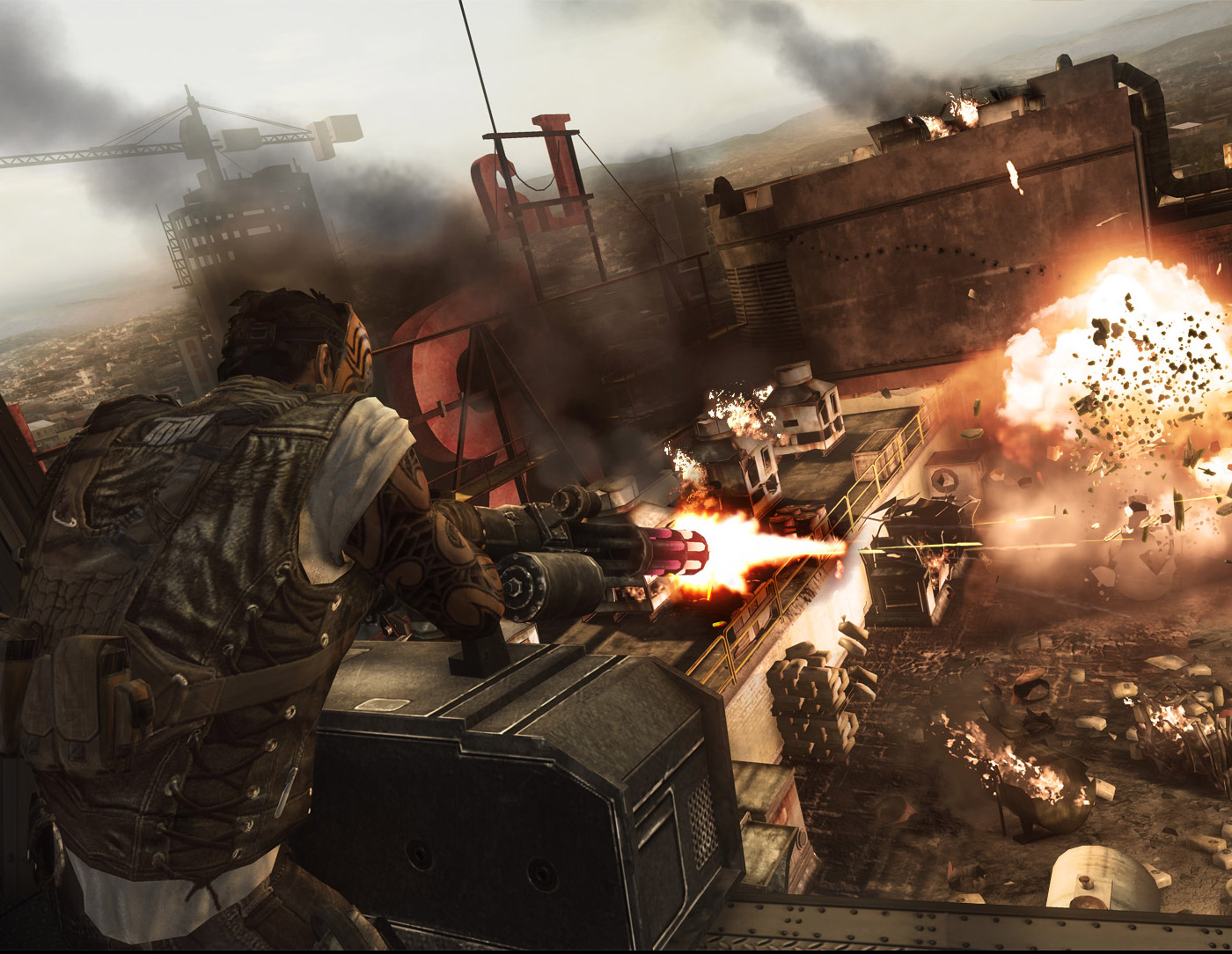 There's no thought or consideration visible in The Devil's Cartel. The story moves in fits and starts, with a dozen logical (more merciful) points of conclusion and no clear reason to keep going, other than more shooting. The systems built around aggro are rendered moot because aggro is the only thing that seems to matter.

The series' co-op basis remains, but practically speaking, it doesn't count for much. Enemies aren't especially smart — see the above "shoot at everything" strategy — making co-op even more of a turkey shoot. More damningly, over the course of my eight hours of play, most players near me on the Army of Two: The Devil's Cartel leaderboards were playing solo. Maybe they're the smart ones. I can't imagine dragging a friend through The Devil's Cartel and retaining bro status.

By dumbing down encounters and emphasizing overkill, Visceral Montreal has removed the necessity of cooperation and strategy that made up the series' (albeit unrealized) potential. The changes in Army of Two: The Devil's Cartel don't make for a more appealing mass-audience shoot-em up â the result is a final, underwhelming swan song for a series that never lived up to the hype, and one I had started to forget by the time I was finished playing.