I had more fun in Soul Sacrifice's menus than in its battlefields.

Announced at first as a new game from Mega Man-creator Keiji Inafune's Comcept studio, Soul Sacrifice doesn't have a lot in common with any of the veteran creator's previous works. Soul Sacrifice is built on a foundation of saving and sacrificing enemies and allies.

It's a game where the rewards are found while experimenting with new powers, playing cooperatively and making top-level choices, but rarely in the moment-to-moment combat. Its mechanics seem opaque initially, but they manifest in fascinating ways — if you can survive the slog through its repetitive battles.

Weighing the risks and spoils of each sacrifice is rewarding 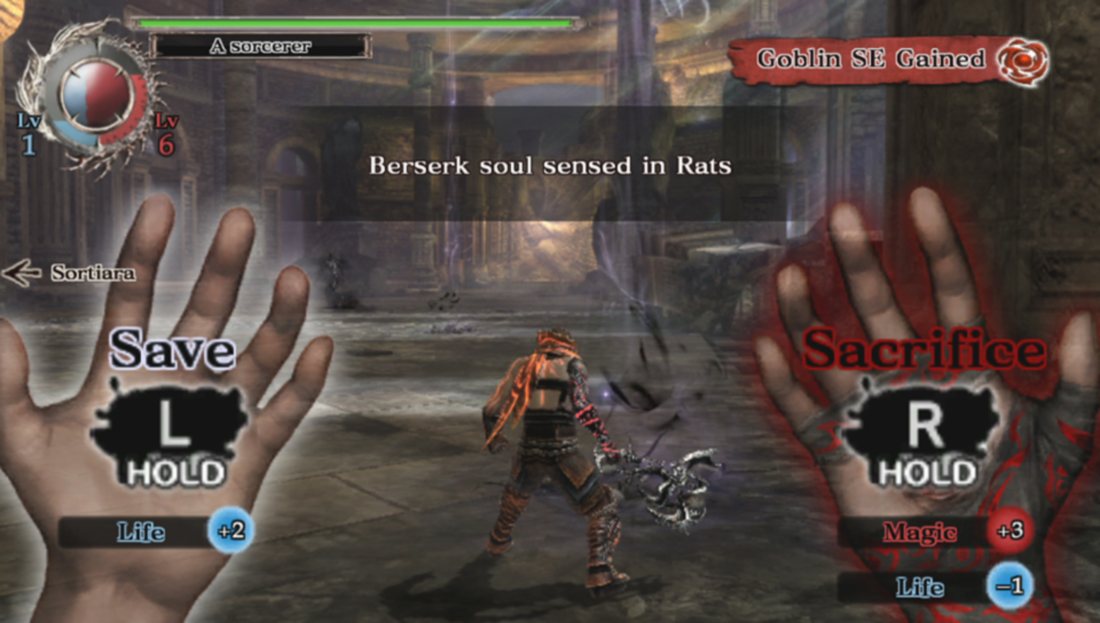 Players start Soul Sacrifice as the next-in-line victim of Magusar, a powerful sorcerer who fuels his life force by feeding on the sacrificial deaths of the magically-inclined. Librom, a wise-cracking book bound in flesh, records the fates of the imprisoned and the obscured tales of Magusar, his enemies and his allies. As players read through Librom, they relive the quests and memories of the talking tome's former owner, uncovering — and in some cases rewriting — the history of the sorcerers charged with defending the world from monsters.

The concept at the heart of Soul Sacrifice is the player's option to save or sacrifice fallen enemies, from lowly goblins and orcs — twisted mutations of rats and cats, it turns out — to the archfiends, humans who have transformed into grotesque boss monsters. Choosing to save a fallen foe grants the player energy toward their life and defense, while sacrifices devote that energy to magic and attacks. The system doesn't challenge players to make moral choices, but rather has broad-reaching implications on a player's individual strengths and weaknesses, frequently resulting in difficult decisions with equally compelling outcomes. Weighing the risks and spoils of each sacrifice is rewarding. But your choices can also be easily undone and overwritten, so there's not as much weight to them as there could be.

The decision to save or sacrifice extends beyond how one chooses to level up one's sorcerer. The same choice applies to fallen allies and, if the player falls, whether to offer oneself up for sacrifice to aid your fellow sorcerers as a disembodied spirit. The results of that choice can be dramatic: A revived fellow sorcerer can be a valuable asset in certain battles, but sacrificing them can also unleash a powerful attack. This is one of the many multifaceted aspects of Soul Sacrifice's system of choices.

Underpinning Soul Sacrifice's simple but significant system of binary choice is an extensive list of spells, called offerings, that players can draw upon in battle. Players can outfit themselves with a half-dozen magic spells at a time, each with their own elemental attributes, strengths and weaknesses. They form shields, swords and projectiles, even armor. Unlocking the secrets of how offerings complement each other, how enemies react to each offering's elemental attributes and how magic spells can be upgraded and combined is easily the most intriguing component of Soul Sacrifice. 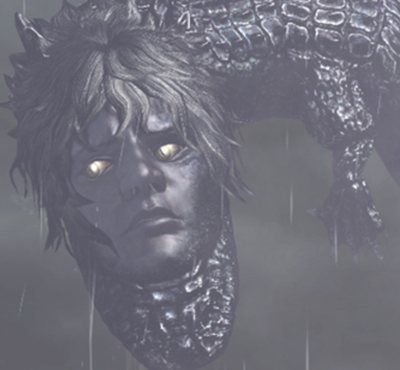 For example, one of the game's archfiends may be vulnerable to frost-based powers. Repeated cold attacks can encase an enemy in ice — an affliction called "Frozen Hell" — and when followed with an electricity-based volt attack, will do extra damage while incapacitating the target. Soul Sacrifice's various elements (frost, heat, stone, volt, venom) can be used in combinations that result in devastating attacks. Mastering those combinations and determining enemy vulnerabilities makes strategic, pre-battle planning a necessity. 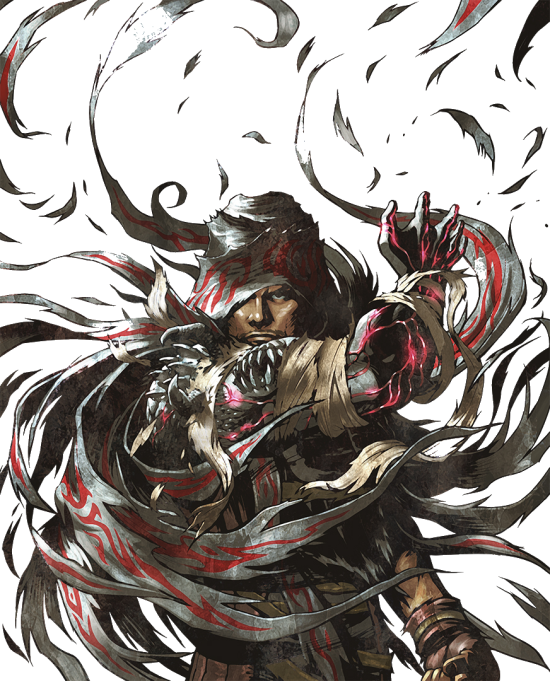 Given the complexity of Soul Sacrifice's huge library of magic items, I expected its user interface to be a mess. But I was pleasantly surprised to discover that its abstract systems — how magical components work together and how systems rely on other systems — are readily decipherable, thanks to smartly designed menus that live within the pages of Librom.

Soul Sacrifice has even more complexities, such as Black Rites — sacrificial spells that do great harm to both the player and their foe — and sigils — carvings cut into the sorcerer's spell-infused arm for even greater customization. Puzzling out these systems upon systems, combining spells and discovering new recipes is an engrossing process, made more player-friendly thanks to the ability to save custom load-outs. But Soul Sacrifice's methodical, repetitive combat is far less interesting.

Many of Soul Sacrifice's missions drop you into a battle arena with the goal of clearing out a certain number of monsters. It's a tedious exercise in casting spell upon spell at monsters until they drop. The limitation on the number of times a spell can be cast adds a thin layer of strategy, but beyond that, combat is often jamming on buttons in a mind-numbing grind.

AI-controlled allies are another source of frustration in battle, frequently becoming a liability thanks to their thickheadedness. Even the most powerful allied sorcerers are at the mercy of Soul Sacrifice's reckless artificial intelligence; you have almost no control over their behavior. That complaint can be overcome with online multiplayer, but the game's most difficult boss monsters remain frustrating in solo encounters.

The boss fights shake up the grind, at least. Soul Sacrifice's take on Cerberus, a giant electrified three-headed weredog, presents an intense, thrilling and occasionally maddening challenge that helps the battle stand out, which is good — you'll be fighting it more than once due to the nature of the game's reward systems.

Soul Sacrifice doles out bits of gear depending on your performance in each mission. Better performance nets better gear, naturally, and slicing off certain cursed parts of archfiends will award even better drops. In pursuit of hundreds of offerings and essences, I felt forced to repeat missions, meticulously enduring lows to reap the occasional collectible high.

The strength of Soul Sacrifice's story and its means of relaying it through Librom is the one thing that alleviates the tedium of monster grinding in single player. The living book who recounts the story of Magusar and the tome's former owner is the source of the game's twisting narrative. Detailed myths and side stories inked within help shed light on the world of the sorcerers. He's not the best appendix, or the most intuitive universal user interface, but Librom is the game's main source of personality and its rare comic relief. It's an inspired method of telling the game's dark, winding tale.

It takes a sizable commitment to uncover the dark, captivating mythology of Soul Sacrifice underneath its grind-heavy beginnings. Whether unlocking the mysteries of its story or plumbing the depths of its magic systems, the experience is weighed down by a reliance on dull combat mechanics. Its complex, interlocking systems and the draw of cooperative multiplayer can't save Soul Sacrifice from its greatest sin: tedious gameplay.