New Thief is same as the old Thief, so what's the problem?

Share All sharing options for: New Thief is same as the old Thief, so what's the problem?

Eidos Montreal began development on its reboot of Thief in 2009. At last week's Game Developers Conference, representatives from the studio presented the game to the press for the first time.

The staples of the original Thief games — the sneaking, the stealing, the sly protagonist Garrett — have been recreated in what the developers are calling a "pimped-out" version of Unreal Engine 3. The familiar pseudo-Victorian setting now appears lifelike. Molecular raindrops splash on the stones that construct the streets, factories, shops and mansions. In a brief demonstration, fire breaks down a wooden building, thousands of embers licking the ceiling. Thief looks like a next-generation game, but Eidos was reluctant to say how much it plays like one.

In the nine years since Thief: Deadly Shadows, first-person and stealth games have evolved. First-person is now the domain mostly of violent, setpiece-driven shooters. Stealth games have grown to emphasize elaborate kills and inhuman feats of acrobatics. The notion of a modern first-person stealth game was crystallized in last year's Dishonored, a game that felt like Thief, if Thief also included magical skills like teleportation and grotesque face-to-face kills.

The new Thief, compared to Dishonored and other contemporaries, is consciously restrained. Garrett and his skills are grounded in a world that resembles reality. He dashes from one shadow to the next, wielding a blackjack for knocking out guards and a bow for a variety of environmental purposes.

From what we've seen, the closest the game comes to magic is Garrett's Focus ability, which buffs the thief's skills. Time slows when picking locks, and when picking fights, an enemy's body parts become individual targets, letting the player direct his strikes. Focus is a limited resource, a decision the developers believe will force the prioritization of its various uses. "If you want to quickly steal everything off someone now," said Stéphane Roy, a producer on Thief, "you might not be able to quickly break into a room later."

When asked how far the game would lean into the modern action genre, the lead level designer, Daniel Windfeld Schmidt, noted that a run in the new Thief in which Garrett knocked out guards — he didn't fight or kill them — could be considered action-heavy. The team is configuring a game that allows players to play how they'd like, but encourages the use of stealth. Unlike many modern first-person games, Garrett's health does not recharge. With limited health, Schmidt expects many players will play like a ghost, entering and exiting the world unseen.

Thief may not have magic, but its developers have sewn on a few novel tricks. When Garrett peeks, his hands wrap around the object providing cover. Garrett can also look through peepholes, watching and listening to secret conversations. Arrows once again come in a variety of flavors, including fire and ice. During the demo, we saw one specially loaded arrow extinguish a flame. We also noticed an emphasis on trapping enemies. Switches were set to lock guards inside rooms, and later a ventilation pump was filled with opium, intoxicating an entire room of potential victims.

The level shown was a condensed version of a longer stage; the brevity was intended to emphasize the game's many features. Schmidt said the full stages are open and allow for considerable experimentation. It was a struggle to imagine that during the demo, which began with a linear introduction followed by a series of sprints down city streets that culminated in the robbery of a brothel full of aristocrats.

Settings were claustrophobic, with the occasional room connected by many tight corridors. The few truly grand rooms were busy with furniture and people, and too often Garrett would stand inches from someone's face without being seen. 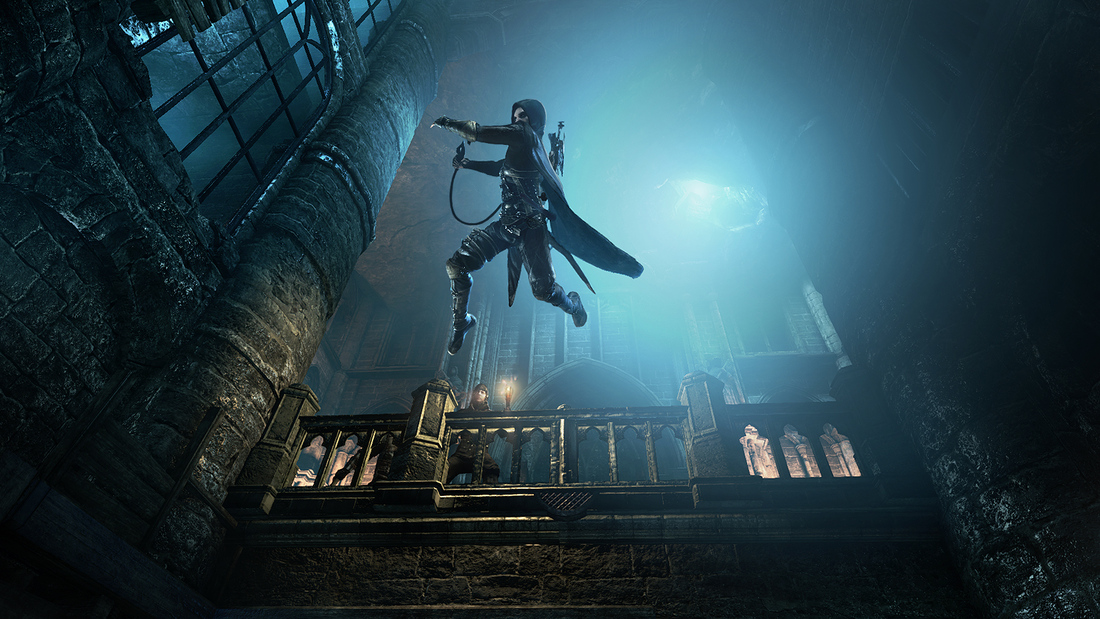 The sequences seemed to be stitched together. A lack of fluidity may be the fault of the occasional use of the third-person perspective. The developers have chosen to switch from first-person to third-person when Garrett scales the city's tall architecture or when he performs a special close-range kill. The switch was unpredictable and distracting. We cycled from feeling nauseated to irritated to confused.

The other unusual inclusion is Garrett's inner monologue. Returning from the previous games, the speeches intend to direct the player towards objectives. Schmidt compares them to Batman talking into his earpiece. Being directed by Garrett is helpful, but his voice acting sounds as if it's stand-in audio. At one point, when Garrett watched a mysterious encrypted plate transform into a glowing ball of blue light, he casually mumbled, "Hm, now I'm curious."

Schmidt said getting the voice right has been tricky. "How does he have [things to say] without being a condescending prick with the player," he said.

Thief is above all about stealing, and we saw plenty of it. Environments and characters carry plenty of gold, charms and knickknacks that can be pilfered by holding down the steal button for an allotted amount of time. Like the elongated lock-picking sequences, the slow process of thieving is designed to build tension. The longer the player attempts a theft, the more likely they'll be found out.

After the demo, we were shown a brief demonstration of the game's technology, the equivalent of a hot rod owner revving the engine. The lighting, the rain and the fire are all quite impressive, no doubt. This is what the next generation looks like.

Thief currently looks like a proof of concept, a collection of both familiar and ambitious ideas strung together into an extended demo. With months before the release of a next-generation console, the developers have time to solidify what a next-generation game plays like.