Guacamelee proves that you can have reverence for the past without being consumed by it.

With a structure pulled from exploration-heavy 2D classics like Super Metroid and references to other games from Super Mario Bros. to Castle Crashers, Guacamelee could easily have come across as pandering. But it accomplishes more than cloning the successes of older games.

With Guacamelee, developer Drinkbox Studios demonstrates something greater than a love for its influences. It understands how they work, and explores how to pick apart a well-known formula and twist those pieces into its own unique creation.

You begin Guacamelee as a poor Mexican farmer named Juan, whose boring life is interrupted when the woman he loves is kidnapped by a murderous skeleton named Carlos Calaca. Juan is killed in a botched rescue attempt but finds himself resurrected as a luchador in the realm of the dead. Journeying through the forests, deserts and temples of the surrounding countryside, Juan builds up an arsenal of mystical wrestling powers to take on the dastardly Calaca. 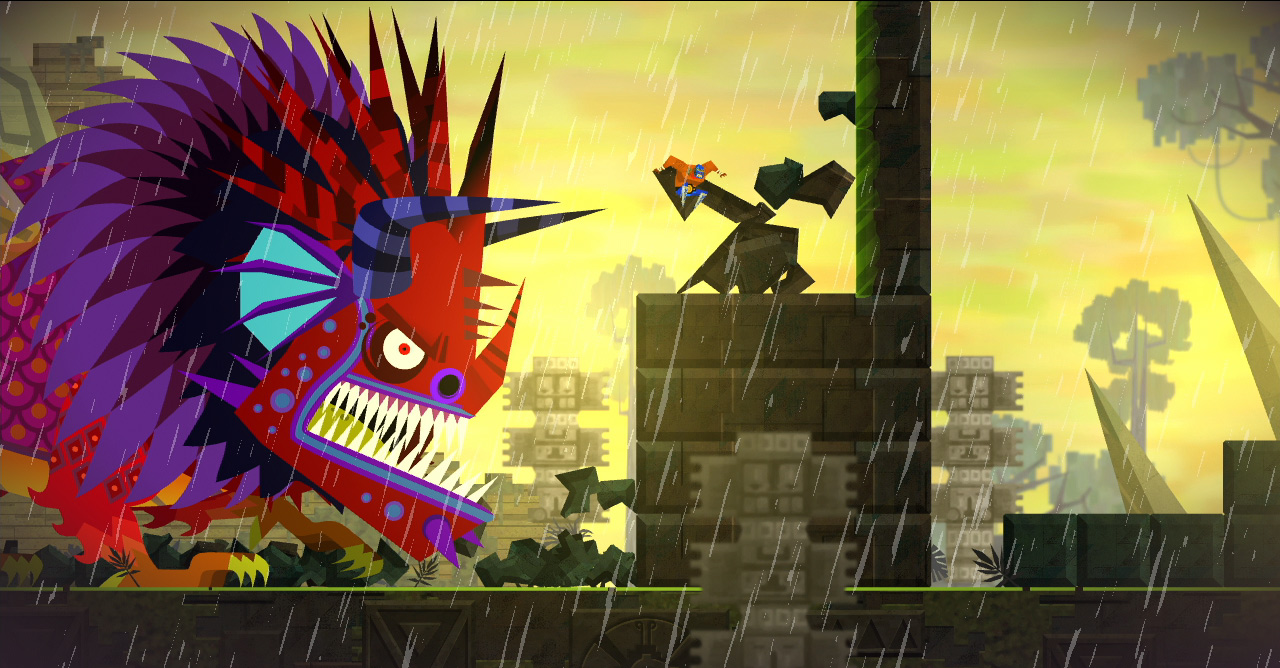 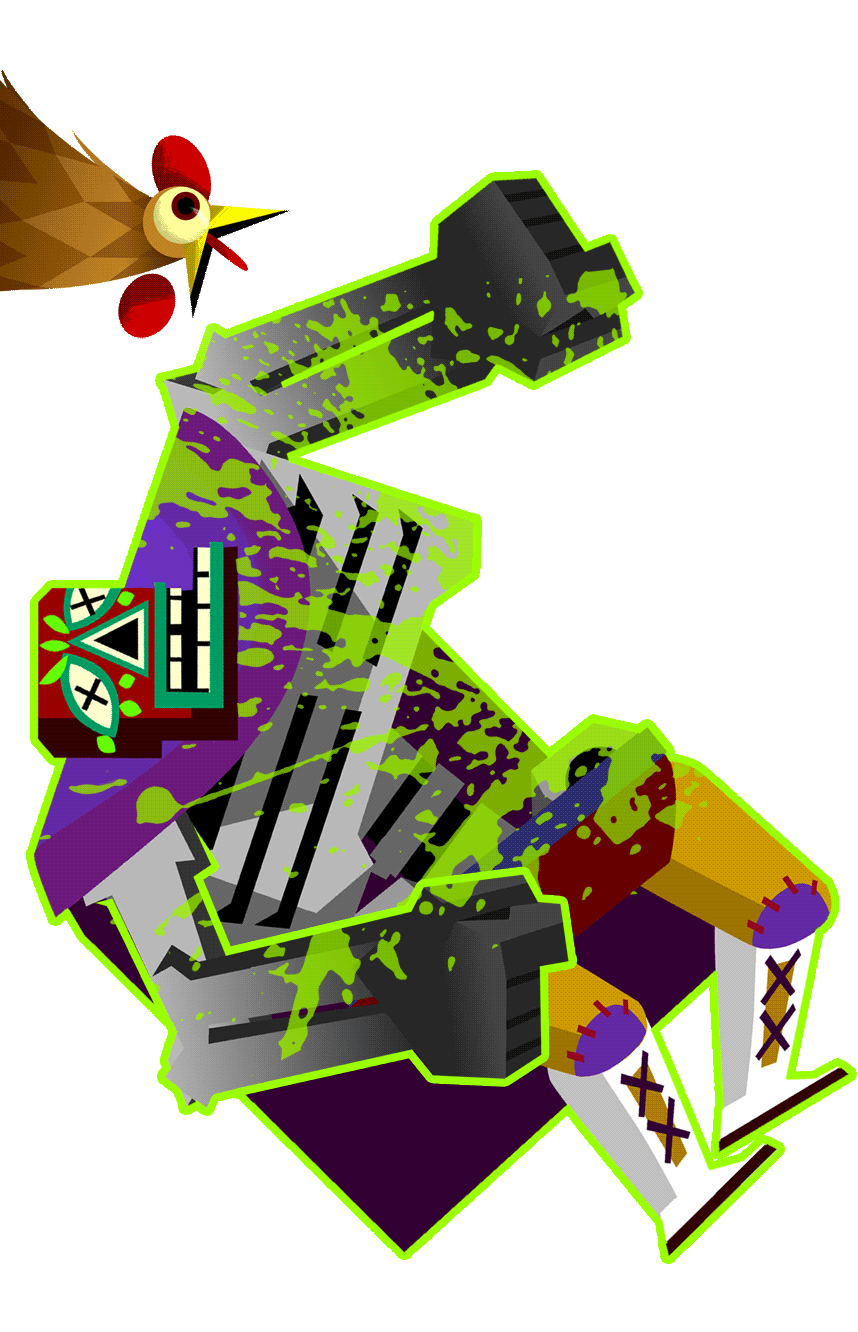 Guacamelee smartly "gates" new areas behind obstacles that only new skills and abilities can overcome, and those new tricks are also added to Juan’s growing combat and platforming repertoire. The headbutt skill destroys yellow blocks but also can be used to send enemies ping-ponging across the screen. The uppercut destroys red blocks and allows you to extend your jump just enough to access some initially out-of-reach ledges. Every upgrade grants the immediate satisfaction of new areas to explore and the extended goal of mastering a new move.

The layered nature of discovering new abilities is aided by some incredible challenges that hold together in large part because of Guacamelee’s tight controls. Juan’s abilities are activated based on the direction you’re pushing the analog stick, and I never had a problem making him do what I needed as quickly as necessary. Players have full air control over Juan, and he can move from one special move into another in any combination.

Chaining an enemy from a dash to an uppercut to a three-hit combo to a body slam sounds complicated, but I pulled off impressive feats like this consistently once I’d spent time learning each move. Guacamelee is willing to give you so much because it asks so much of you in return. Each new foe — from hammer-wielding skeletal giants to airborne dragons — puts up enough of a fight to make it feel like an accomplishment to take them apart without any trouble a couple of hours later.

Even hours into the game, Guacamelee sometimes slipped into old-school, white-knuckle difficulty. Large stretches of the game provide an approachable challenge, but I discovered bonus areas with brutal, non-stop arenas full of enemies and disappearing platforms that tested my jumping skills more than anything since Mega Man. While those bits are optional, the boss fights also provide a stiff test of skill, requiring intelligent combat and masterful pattern recognition.

Those bosses share the game's consistent, striking visual design informed by Mexican culture that makes it a joy to explore. As Juan gains the ability to swap between the realm of the dead and the land of the living, zones you’ve already gone through take on a new form. Lush forests are transformed into creepy woods full of deteriorating plant-life; stoic temple statues morph into demonic visions. Drinkbox has put an astonishing amount of work into building Guacamelee’s colorful world, and I wanted to witness every inch of it. 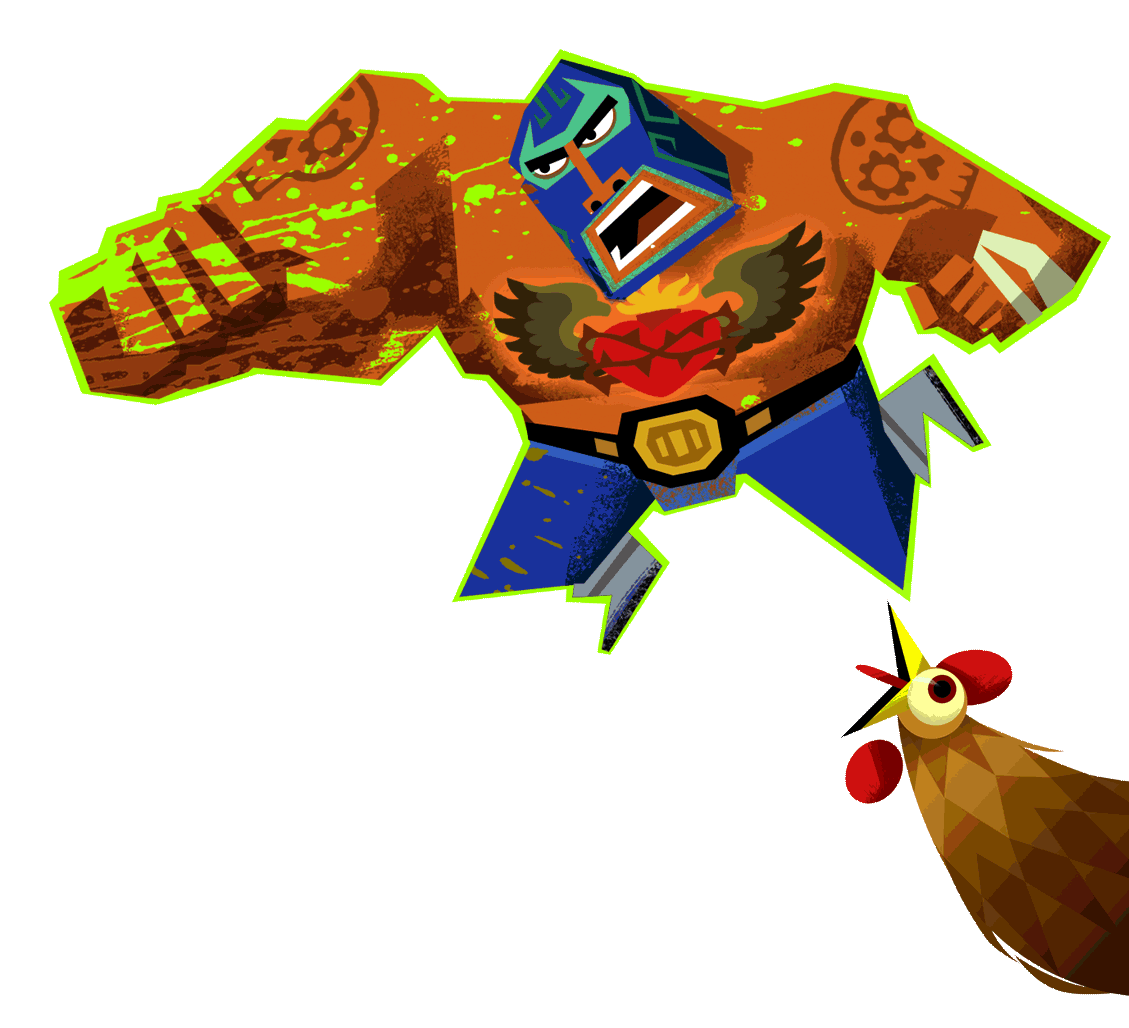 Guacamelee is short, but it's all fun and no filler 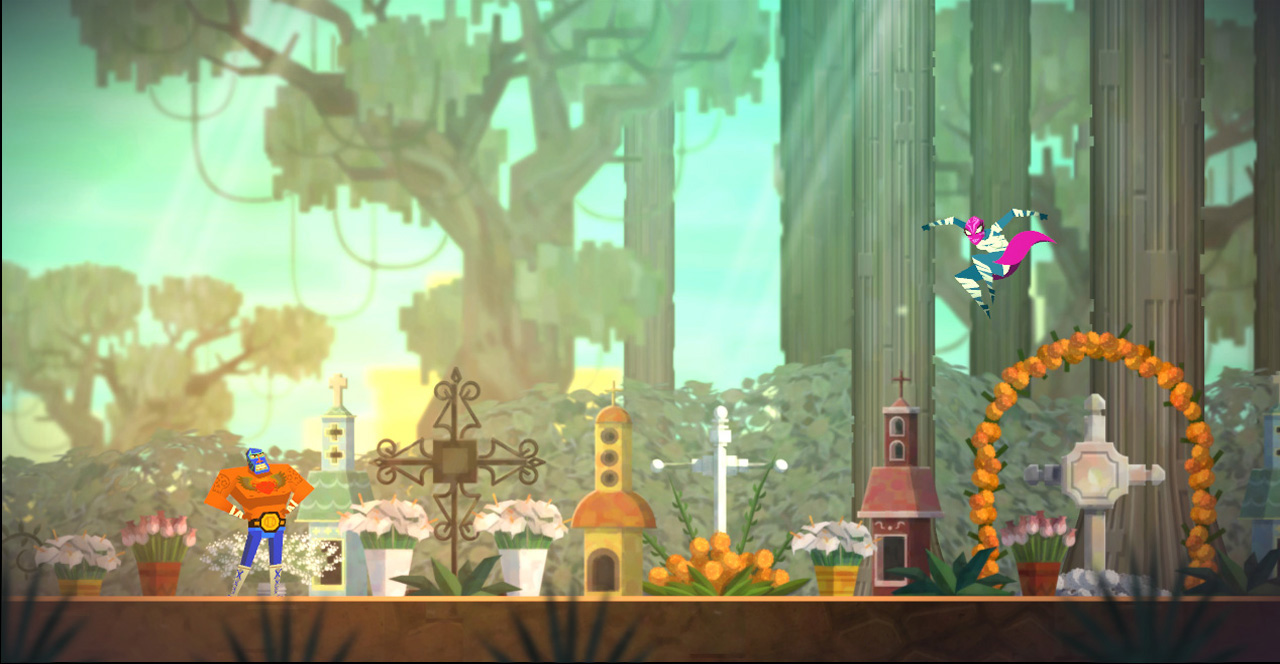 Aside from the main game, Guacamelee features two bonuses of questionable value. First, purchasing Guacamelee on either PlayStation 3 or PlayStation Vita enables you to download it on the other platform with Cross-Buy. As with some previous Cross-Buy games, like the recent Sly Cooper: Thieves in Time, you can upload your save file to the cloud from one platform, then download it on the other and pick up where you left off. With a short and minimally replayable game like Guacamelee, Cross-Buy isn’t a massive addition, but it works fine if you have both systems and plan to switch between the TV and the Vita often.

The co-op option has less appeal. While a second player can jump in at any time, they can only do so locally. Even if you have a friend ready to join you on the couch, Guacamelee’s brand of difficult platforming and thoughtful exploration doesn’t seem well-suited to co-op play. The co-op option doesn’t take anything away from Guacamelee, but it doesn’t add much either.

Even for completionists, though, Guacamelee doesn’t overstay its welcome. The near-flawless pace guaranteed that every time I felt like I fully understood how to use an ability, another was just around the corner. Room setups aren’t overused for combat or platforming. I never hit a point where I felt like Drinkbox had run out of ideas. Guacamelee is relatively short as a consequence, but it's all fun and no filler.

Guacamelee succeeds on its own merits as something greater than homage

There are plenty of retro-themed 2D releases mining 8- and 16-bit nostalgia and concepts, but very few are crafted with Guacameleeâs expertise. If you stripped away the knowing winks at other games, it would still be noteworthy. The team at Drinkbox has studied the greats, but they've forged their own path with a consistent, engaging art style, and meticulously perfected controls and level design. This passion for Drinkboxâs influences has produced more than homage; Guacamelee is remarkable on its own.